Our whirlwind trip around some of the more remote Indonesian islands continued with our flight to Palu, the capital of the province of Central Sulawesi.  I wasn’t overly keen on flying Lion Air (or it’s subsidiary Wings Air) as they have an almost non-existent safety record.  I know many will argue that “what will be will be”.  And for the most part, I agree, especially with things such as the unfortunate and ongoing terrorist attacks on aircraft.  There’s not a whole lot about that situation that I can control, and so therefore, I will continue to travel and fly.

Much of the safety ratings for aircraft however relate to maintenance, air safety procedures and of course their actual record in the sky.  Not having been in control of booking this airline, put me outside my normal realm of comfort.  It didn’t help matters any when we saw the pilot smoking in the cockpit!  It wasn’t the first Indonesian flight we’d been on either where it was clearly obvious that someone was smoking in the toilet!

One thing I would totally recommend on any flight through the Indonesian Islands is a window seat.  As you will see from this photo, and a few more down further, there are some incredible views on offer.

As a destination, I wouldn’t really bother with Palu.  Like several of the other Indonesian cities that I’ve already visited, like Manado, it is a gateway to some other great places, worthy of a visit.

This beach is located about an hours drive from Palu.  It’s a fairly uneventful drive, passing a few villages along the way. 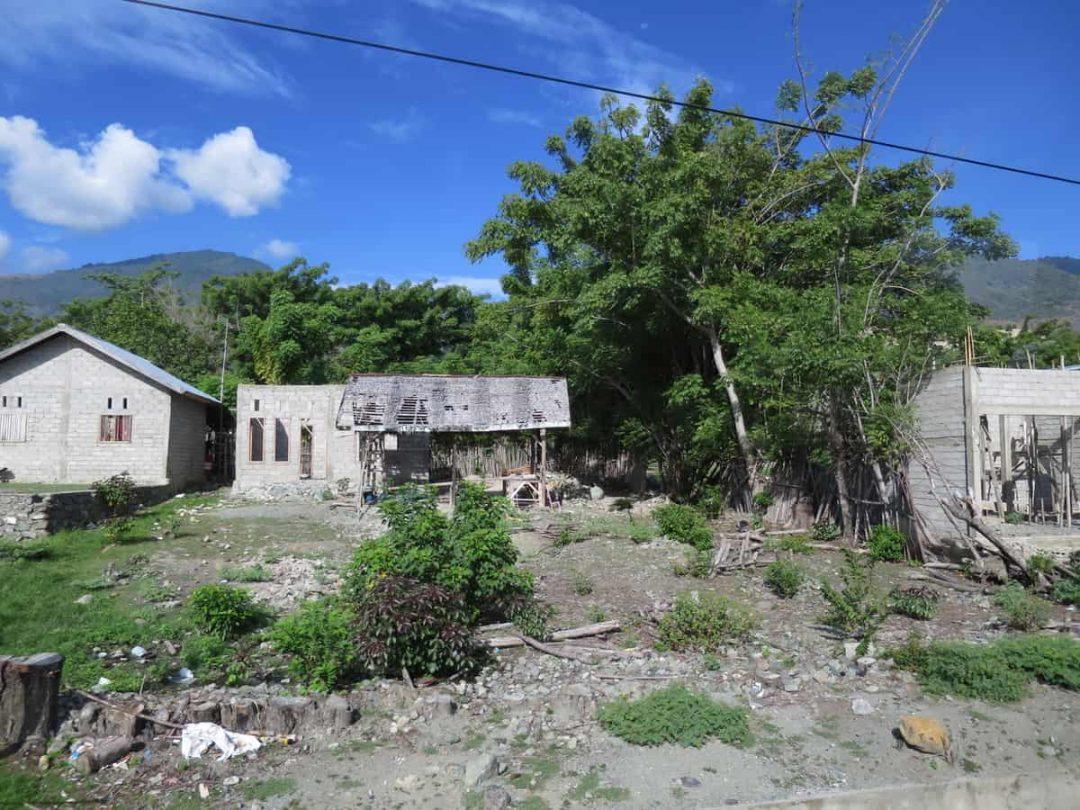 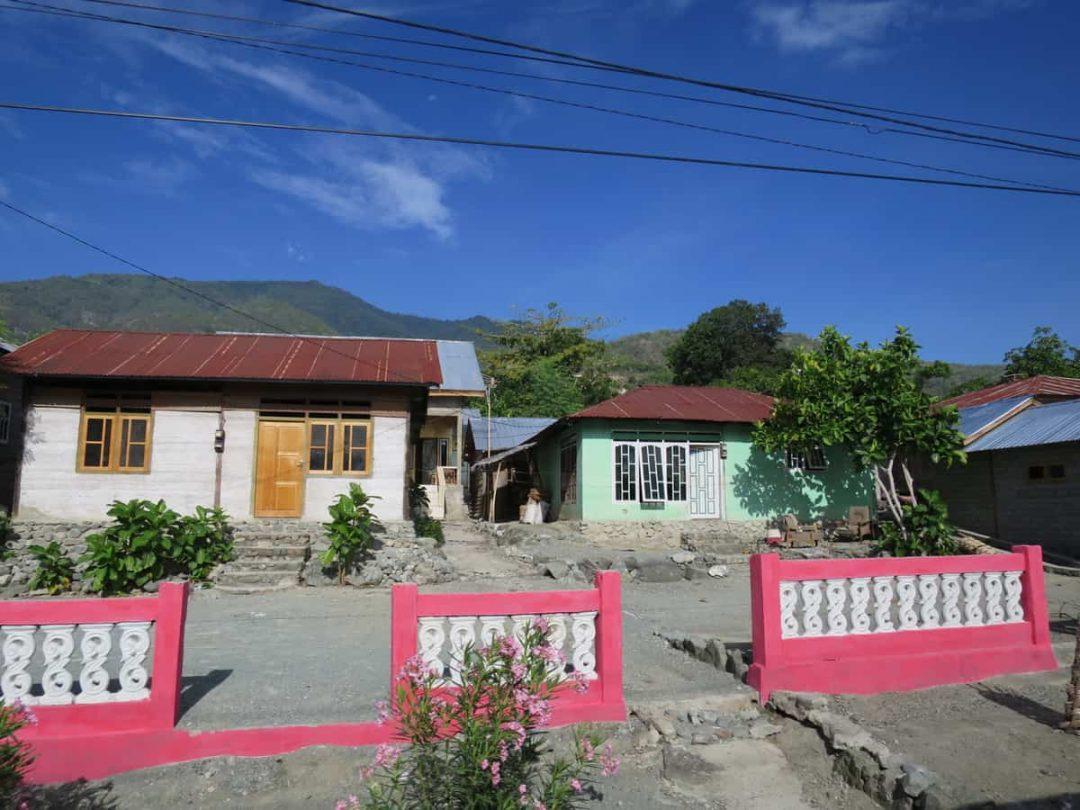 The beach, however, is spectacular, and the Prince John Dive Resort has found itself one of the best locations to set up its business.  Unlike other beaches that we have visited, this one also has a bar, making it a refreshing place to seek solace from the day’s sun.

The resort contains accommodation as well, and I can concur that it would be an incredible place to wake up to in the morning.  As has been evident in many of these Indonesian locations, such as Bunaken Island, the waters are crystal clear and divinely blue.

Snorkelling and diving can be conducted a little further off the coast and there are boats here to take you out.

If you are planning a dive trip to Indonesia, you could also consider a liveaboard experience. 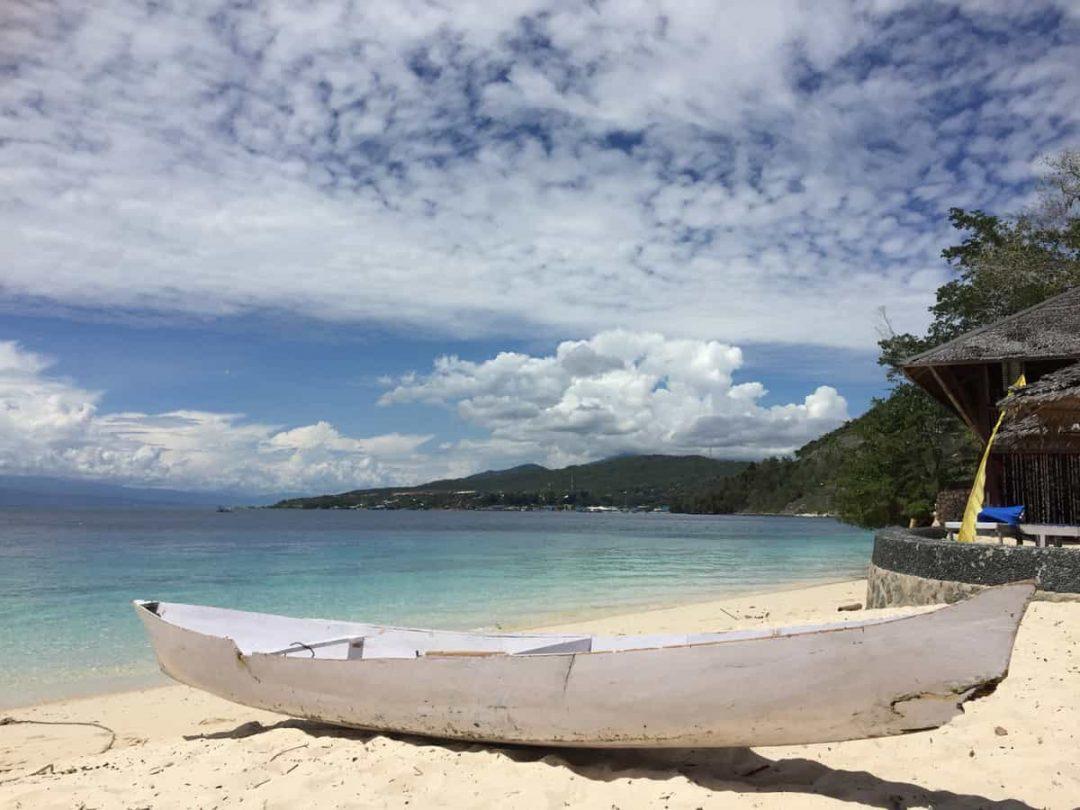 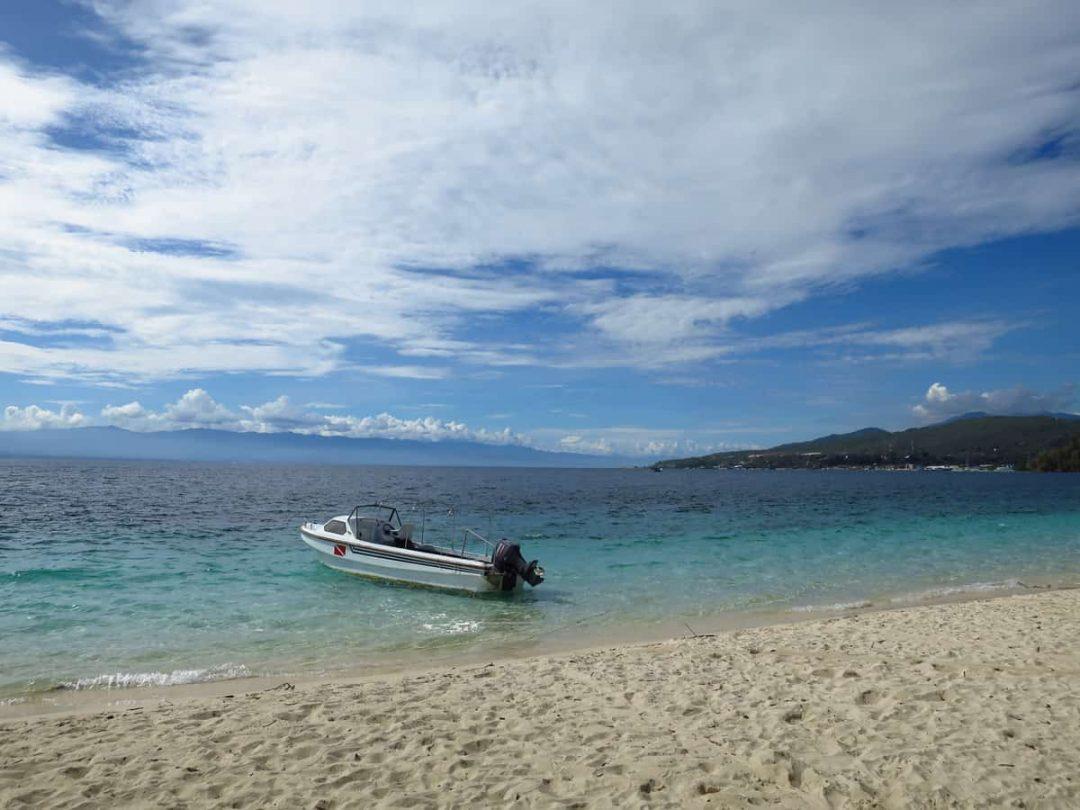 So peaceful out on the water

I love strolling through local villages but it’s something we really haven’t been able to do much of on this trip.  It was so great then to be able to venture behind the resort to say hi to some of the locals.

We arrived at Makassar too late to see anything.  This was just to be a stopover, en route to Ambon tomorrow morning.  I did manage to score another fantastic view out of my window.

The fact that the sun was rising and I was already on a plane and well into the flight is a clear indicator that we were up way too early on this occasion.  The alarm had gone off at 1.30am, in order to catch our flight to Ambon, located in a  group of islands known as the Maluku (or Moluccas) Islands.

Sunrise upon arrival at Ambon

I’ve been fortunate to visit many Australian war memorials and cemeteries in Europe but had no knowledge of the existence of this one in Ambon.  This city was significantly affected by World War Two, being bombed by both the Japanese and the Allied forces, during separate campaigns from 1942-1944.

Australian soldiers were captured as Prisoners of War during 1942 and were held at a camp on this site.

This cemetery contains the graves of soldiers who died during the war and as POWs in the camps.  There are over 2,000 graves here, over half of which belong to Australian soldiers. 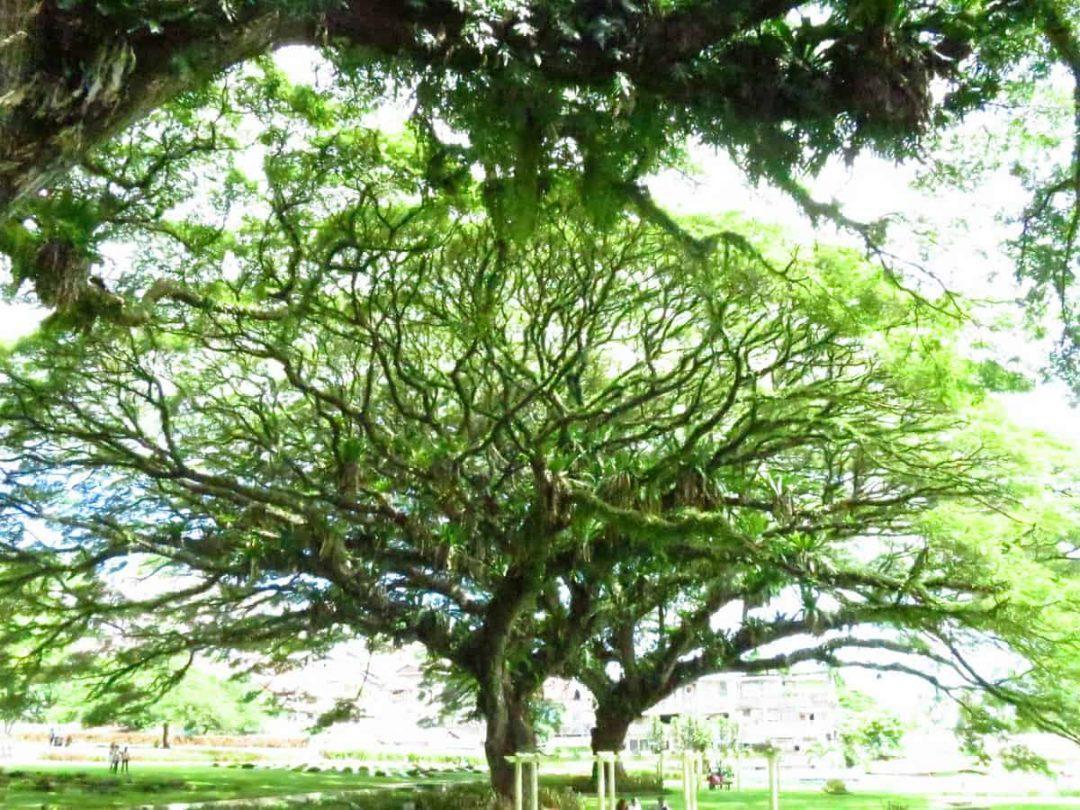 Such an incredible tree at the war memorial 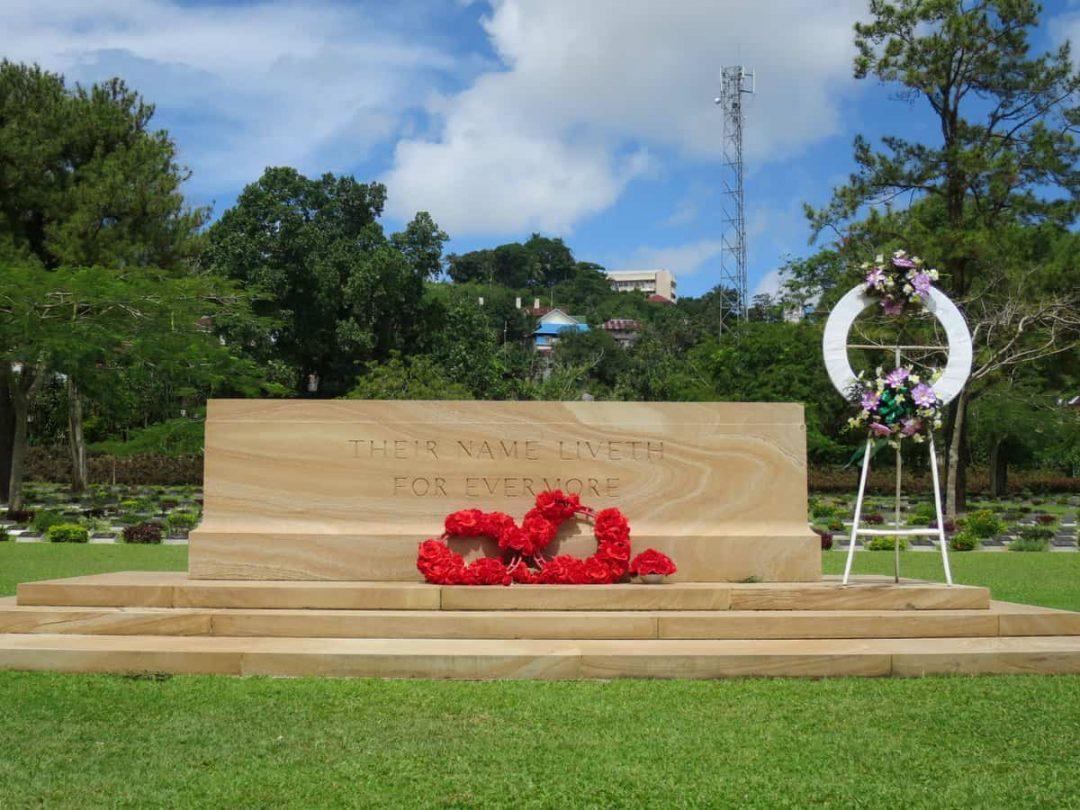 Representing peace, this heavy gong was first struck by the President of Indonesia in 2002 and is now often used during special events. 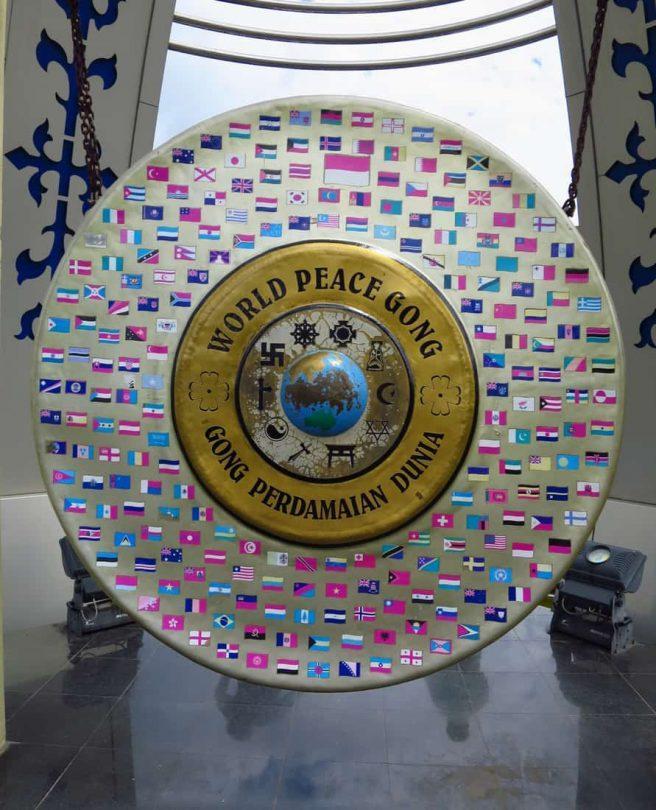 We stopped here both to admire the memorial of a woman once regarded as a fierce fighter against the Dutch invaders, and also to admire the view out over the Bay.  There are really beautiful gardens surrounding the statue, where you could stop for a moment to catch your breath after walking up the stairs, or simply to admire the view. 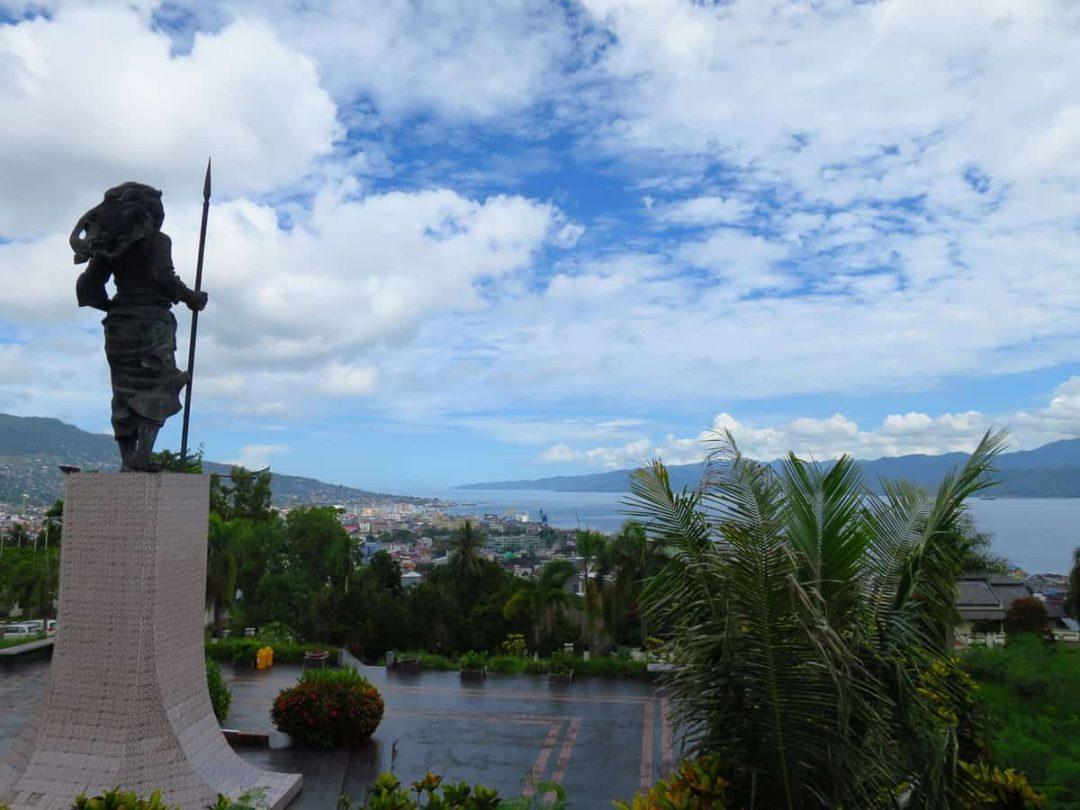 Another wonderful beach and this time we had some real Indonesian culture thrown in, with the local kids doing the Sahureka-Reka Dance.  A  number of costume changes occurred and different props were brought out, in a special performance just for us. 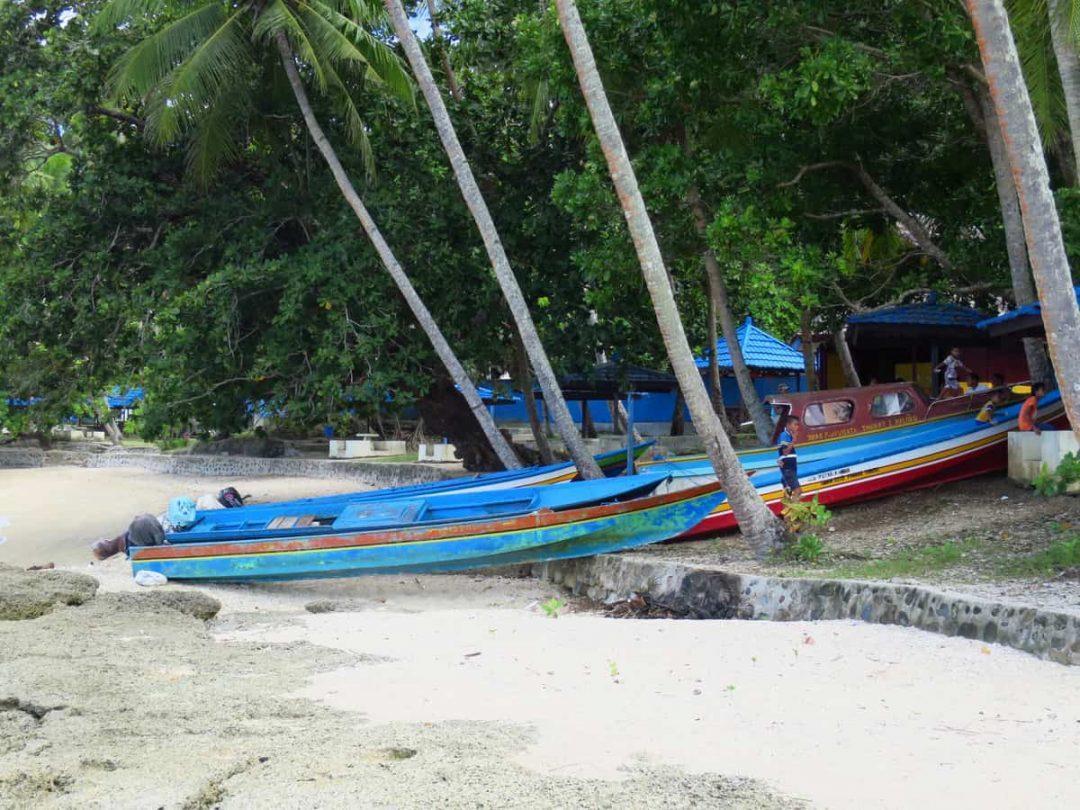 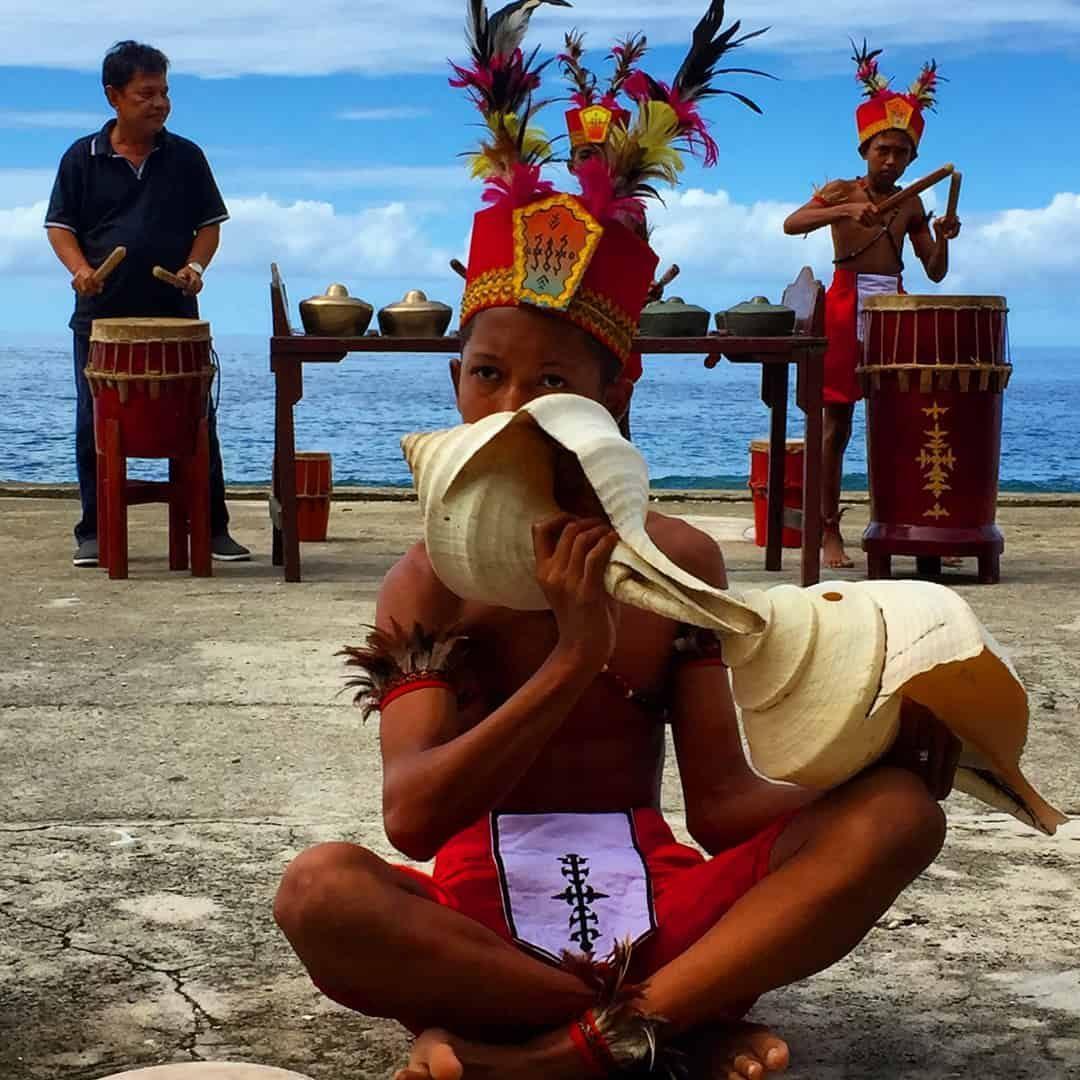 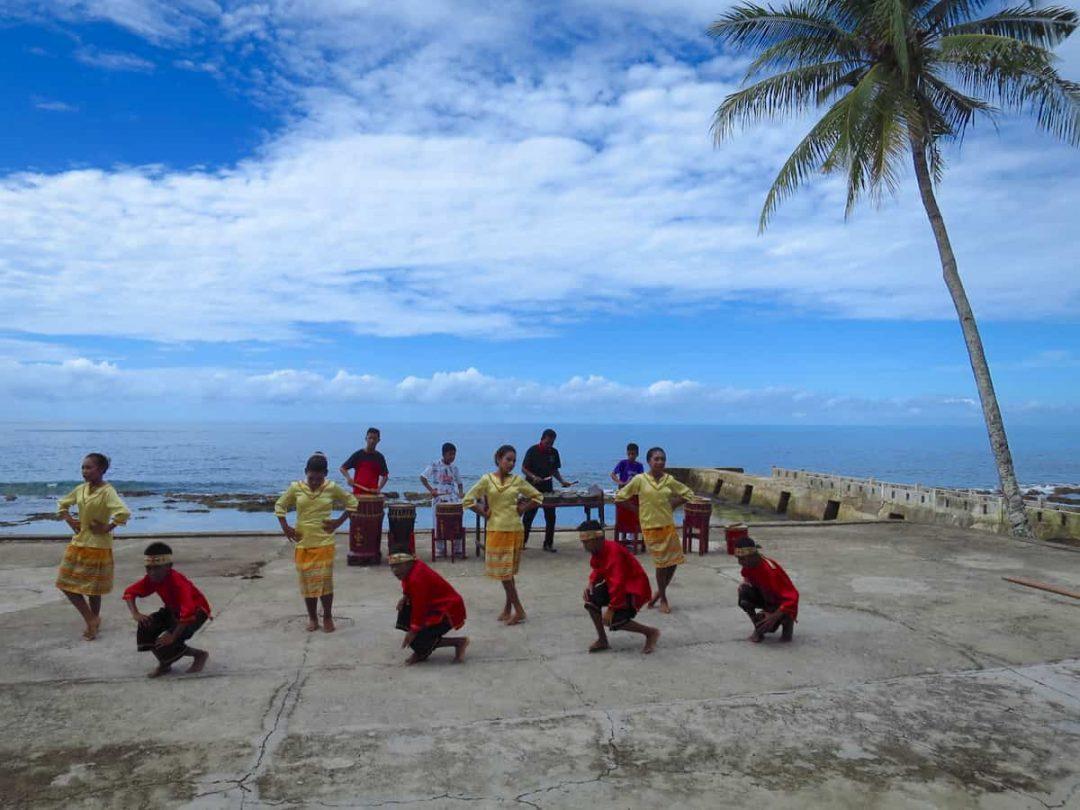 Of all the beaches we visited, this one was my fave.  White sands, clear calm waters, and plenty of locals hanging out to give it a real vibe.  We grabbed a tube and hopped straight in.  These calm waters are a little deceptive though, with a really strong current sweeping through here.  It gave us a good ride on our tubes, although pushing back against it was a bit tough.  Such a first world problem I know. 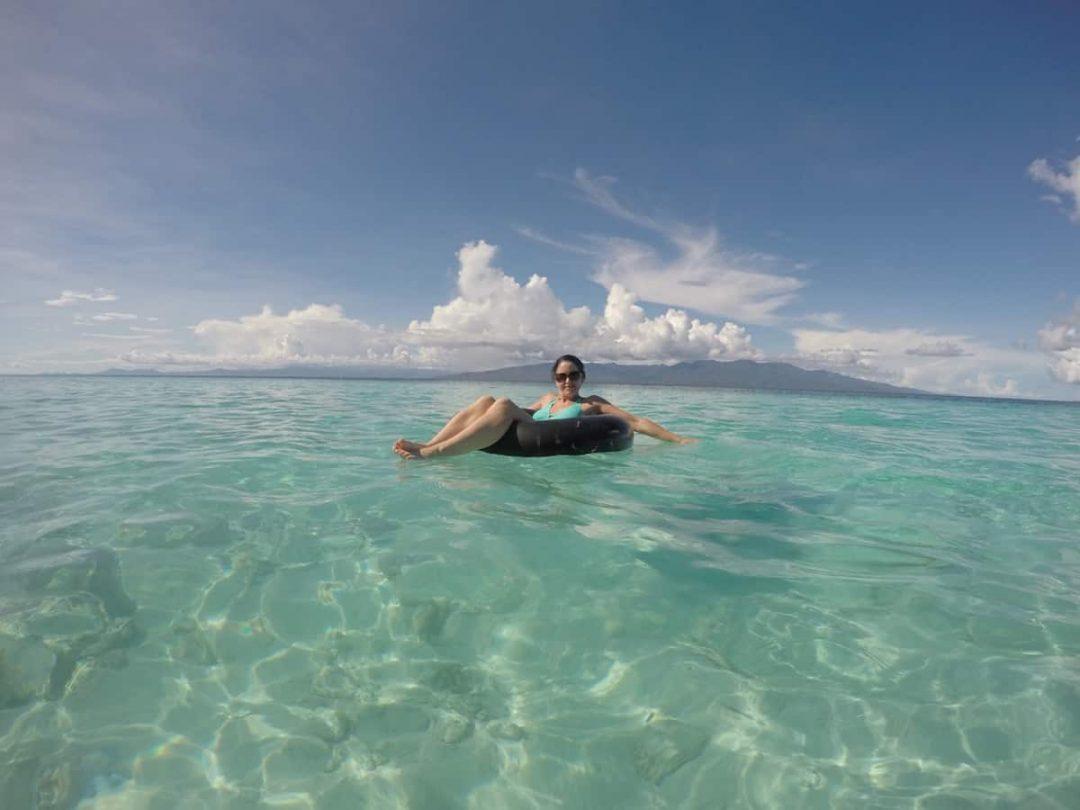 Photo courtesy of Sarah from Fit Travels who used her trusty
GoPro to capture this photo of me swanning around in the tube.

The safety standards over here left a little to be desired once more, with the driver of the boat towing the huge banana resembling a Formula One driver. He was whizzing around at pace, and coming in so close to shore that we had to yell out to our friend to “Move it!!!!” for fear of her getting wiped out. 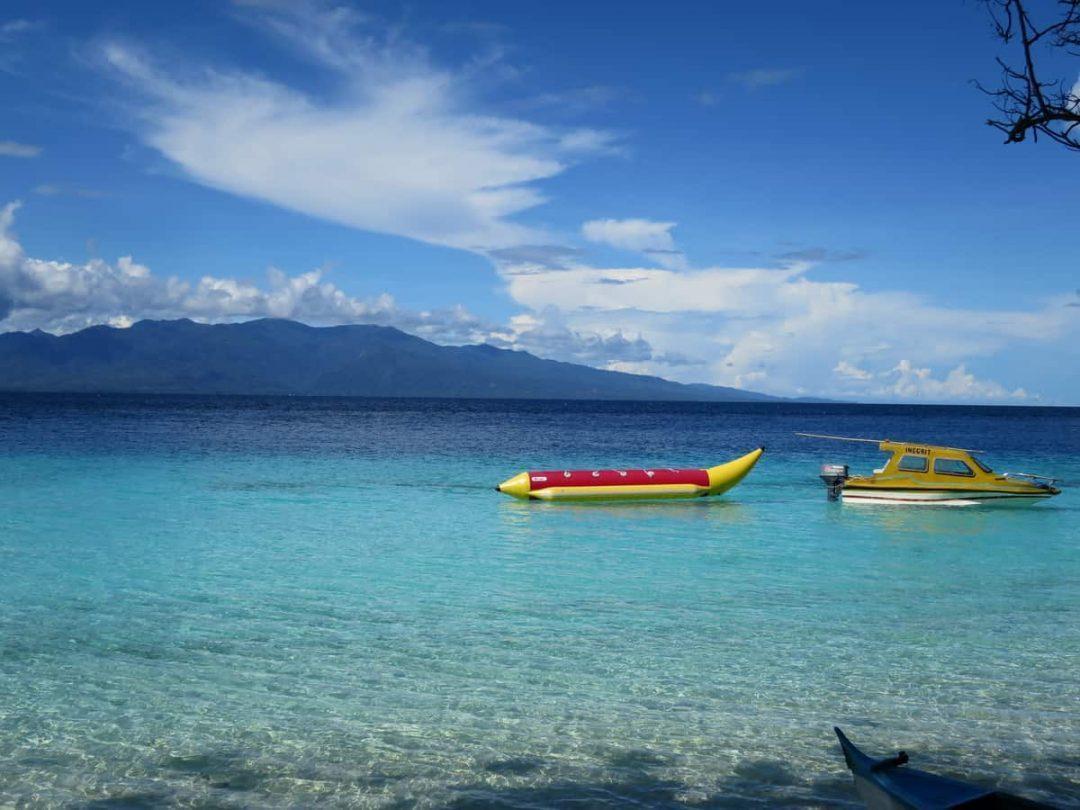 We had a great time with the locals, even talking to two women who had learned their exceptional English off YouTube!  Of course, where else?! 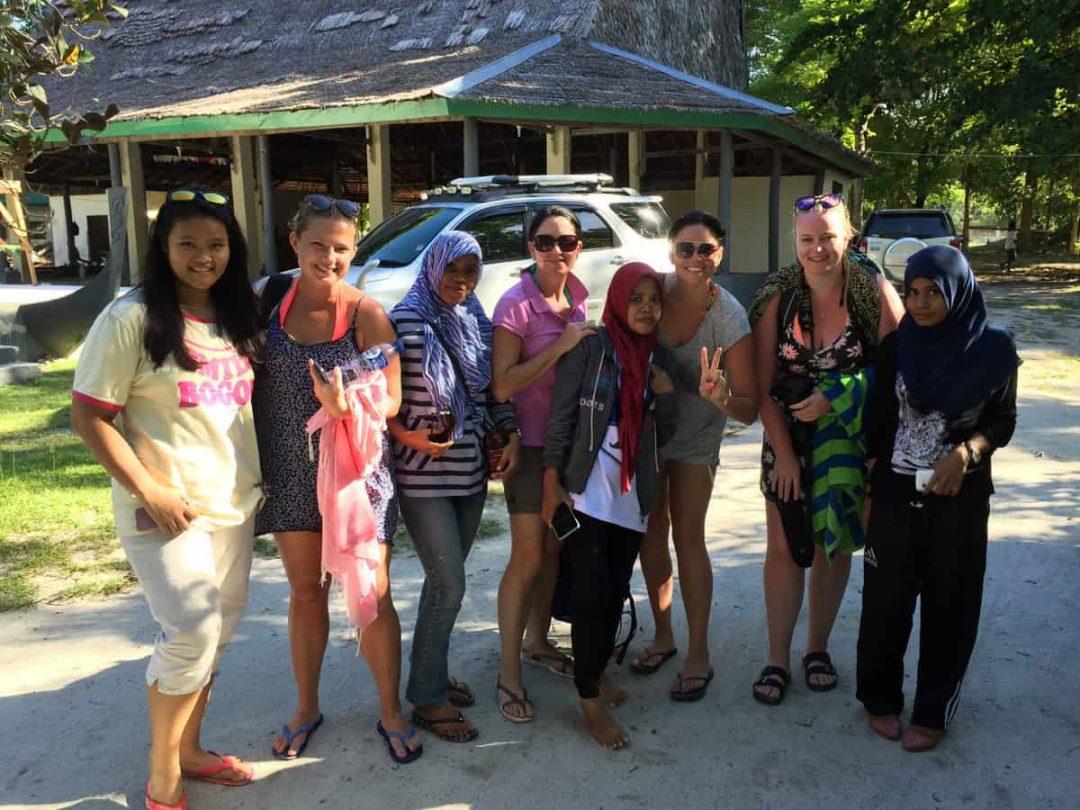 Once again, the locals were keen to have a photo taken with us

How to get there

We flew into Palu’s Mutiara Airport.  Several airlines operate from here, but I would recommend Garuda Indonesia as being slightly better (from a safety record perspective) than Lion Air/Wings Air.  The airport is approximately 5 km from the centre of Palu.

From Palu, we flew Garuda to Pattimura Airport in Ambon, located approximately 35km from the city.

In Palu we stayed at the Hotel Santika Palu, which I thought was a very nice hotel.  The rooms were quite spacious,  had working wi-fi and a very clean bathroom.  Breakfast, provided as a buffet daily, was also good.  I particularly liked having a fresh omelette cooked for me to get me going in the morning. 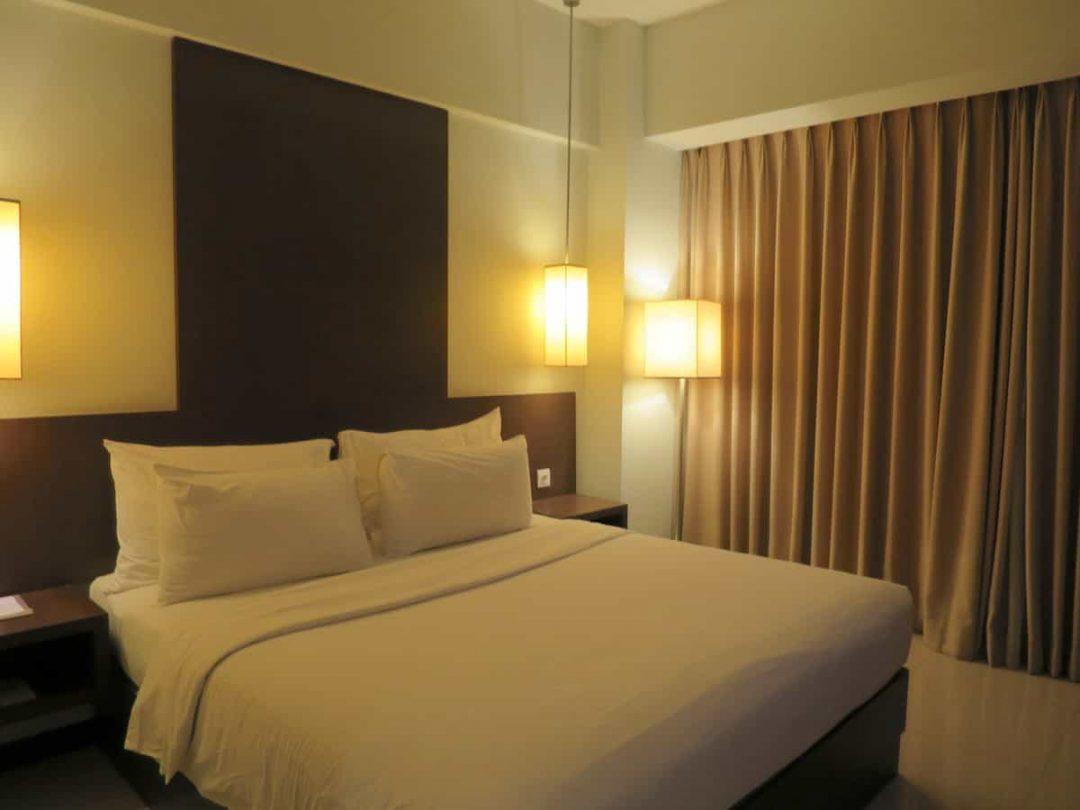 In Ambon we stayed at the Natsepa Resort.  Undoubtedly, this was the best place we stayed at during our whirlwind eight-day tour.  Whilst I would still only rate it as a 3.5 star (rooms and wifi), the view and location were definitely five stars. 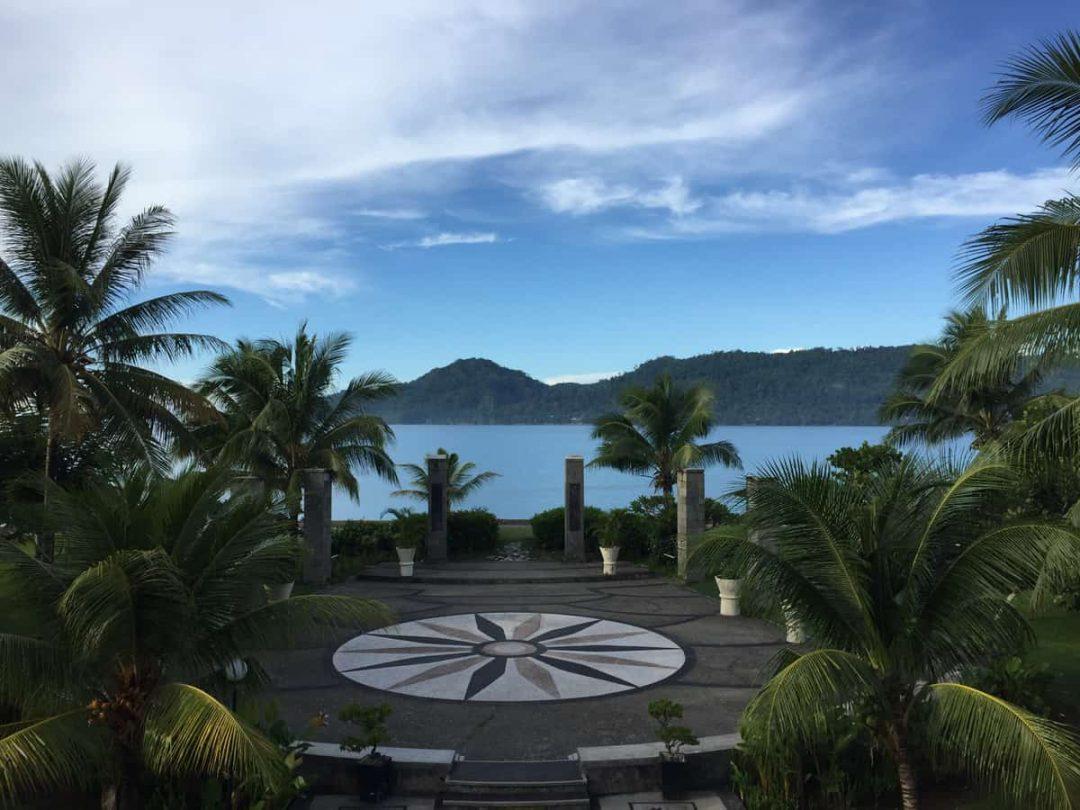 Looking out from reception towards the ocean 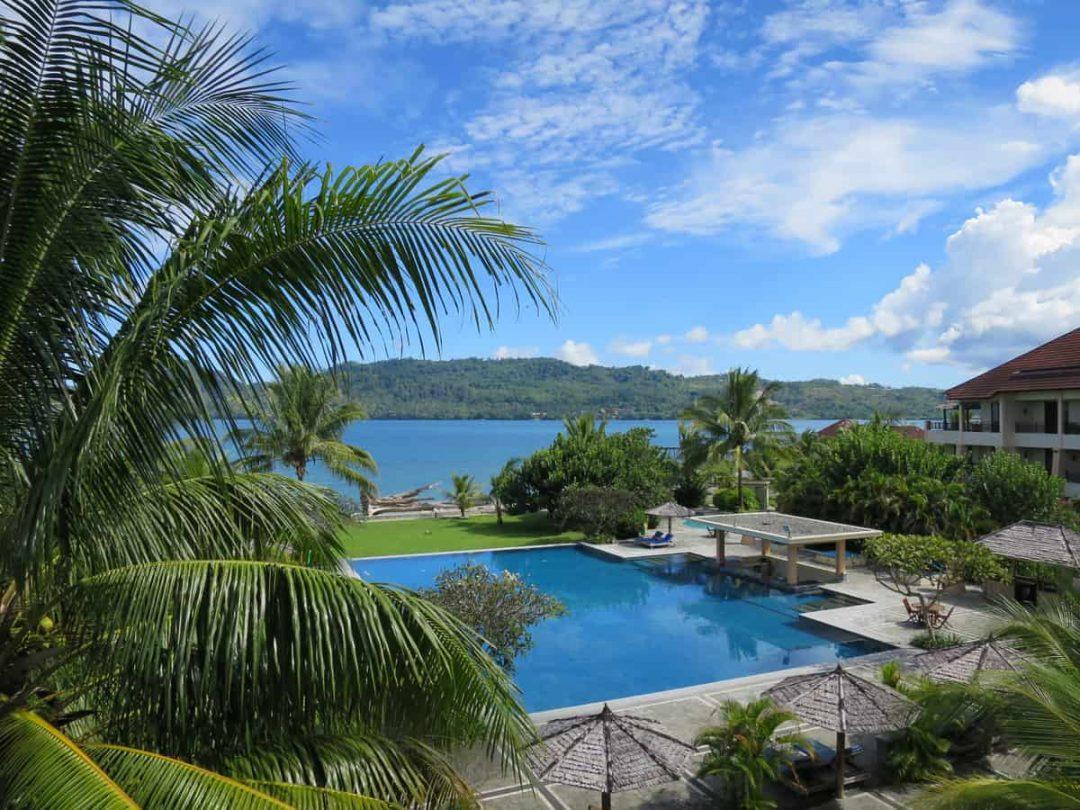 View from my second-floor room

Our time in the Moluccas was under the careful guardianship of Haical Ab from Ilmi Tours.  If visiting Ambon or anywhere else in the Moluccas is something you would like to do, be sure to contact Haical.  His experience in travel in this area is exceptional.

If you are thinking of heading to Indonesia soon, the latest version of the Indonesia Lonely Planet guide would be a great addition to your trip.  Or why not check out some of the other great reference guides.