Skip to content
Home > Destinations > A day in Strasbourg France

A day in Strasbourg

We woke this morning at “our” farm.  At Ferme de la Plume D’or it had just started to rain, making gentle sounds on the roof of the motorhome.   It was lovely just laying back in the comfort of our bed, under our snuggly covers, listening to that soothing sound.

When we finally got up, the rain was still falling lightly, and we were treated to a display of ducks waddling about in the rain.  They clearly didn’t have a problem with it at all.  The Maremmas (the farm dogs) were continuing their job as the protectors, this time hanging out with the goats.  The previous evening, they had been intent on protecting the geese in the sheds.

The farm was busy with geese being packed into crates and loaded onto a van, onto another destination.

Our plan today was to explore Strasbourg.  Because we needed somewhere to park, we decided to head back to the Aire de Service that we had found the day before, and park up there.  The one fantastic thing that is common to all campgrounds and many Aires in Europe is their proximity to integrated public transport.  It is essential when you are in a motorhome and Strasbourg held up it’s end of the bargain too.

We parked up, and within a ten minute walk, we were on a bus, then a tram bound for the centre of Strasbourg.  The tickets (€1.70 each) were able to be used on both modes of transport as long as it was within a 60 minute period.

Strasbourg is such a beautiful city.  Large, well developed and clearly with a forward thinking local government (and funds to match).  There were more infrastructure projects going on here than anywhere else we had been.  Bridges, roads, residential buildings, new hospitals and clinics.  A lot of this was occurring on the outer part of Strasbourg, towards the port and Jardin des Rives.

Like other areas within the Alsace region, Strasbourg also lives with the blend of French and German.  It’s history of ownership has been a large and significant contributor to this hybrid development.

Similar to somewhere like Paris, there is a lot of inner city apartment living.  To smooth out the city edges, there are plenty of gardens and parks, and bicycle paths link the city to it’s eco-friendly inhabitants.

After having my breath taken away at the Milan Cathedral, I thought it almost impossible for it to occur again so soon.  But surely enough, the Cathédrale Notre-Dame de Strasbourg  did exactly that.   It was so big it almost overpowered the square.  Intricately gothic, with pink sandstone on the exterior, huge buttresses, and stunning stained glass and frescoes on the inside.  It made me realise how much I love and appreciate the fine detail that goes into gothic architecture.

Inside the Cathédrale Notre Dame is the Astronomical Clock, and is worth a look.  The clock can be viewed at any time, but if you want to see the clock working, then you must buy a ticket and be ready for the display at around 12.30am each day.

The ticket purchase provides for a video of the history of the clock (built three times, with the current version built in the 19th century)  We didn’t buy tickets but were still treated to the 12 apostles moving at the top of the clock at 12.30.  This clock also includes the position of the sun and moon and a perpetual calendar.

The Cathédrale  is closed daily between 11.20 and 12.30 to allow for those who have purchased the tickets to view the clock.

A coffee break near the Cathédrale gave us a chance to soak up the atmosphere in the area surrounding it, which today, was completely full of tourists.  The ubiquitous selfie stick vendors were around again given the size of Strasbourg and the number of tourists.

The waterways of Strasbourg provide for a different city perspective, with the old city effectively an island, surrounded by the River L’ill.  It is also unique as the entire city centre was classified as a World Heritage Site by UNESCO.  It was the first time a city centre had ever been classified in this way.

Some think all we do is eat

Well, they could be right, but it’s all part of our travel adventure.  It’s about experiencing local culture and what better way to do it than to be part of what they eat.

Our choice for lunch today was at a restaurant called Brasserie Kohler Rehm, right on Place Kleber.

I couldn’t go past the roesti, also a traditional dish.  I’d heard plenty about how good they were, and this one came topped with my newly acquired favourite cheese, munster.   Our waiter was very impressed with me ordering the munster cheese, (not something that is often done knowingly by a foreigner it seems).

The food was delicious, and proved that the people of Strasbourg loved their sauerkraut, just like the Germans do.  There was plenty of it to go around.

Can everything really be this good?

After being on the road travelling through Europe now for a number of weeks, it sometimes occurs to me that it is quite difficult coming up with new and exciting things to say about each town, such is their own beauty.  It’s rare that I find somewhere I don’t like.  It’s also rare to have a European city that isn’t full of history, beautiful buildings, special churches and so on.  So, forgive me if I sound like a broken record, but I need to give every city, town and village it’s own moment in the sun, and not water it down, simply because I’ve been lucky enough to visit so many special places.  But, don’t get me wrong, if there is something or somewhere I don’t like, you’ll know about it.

As I noted earlier, the real beauty of Strasbourg lies in it being built on rivers and canals.  One of the most stunning areas is Petite France, an older part of Strasbourg built entirely on canals.  I was not expecting to see canals in this city at all. (I will admit here to not knowing much about Strasbourg at all) 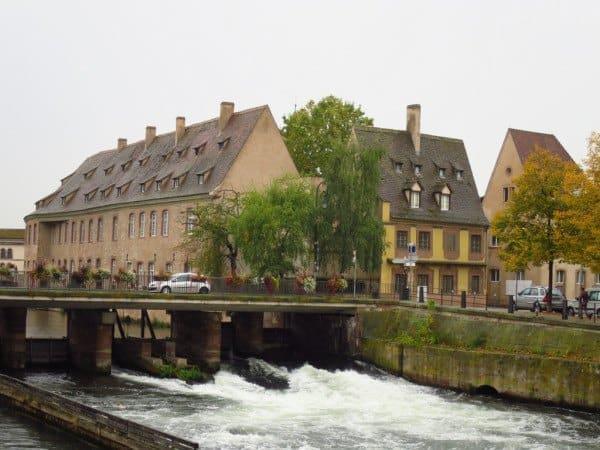 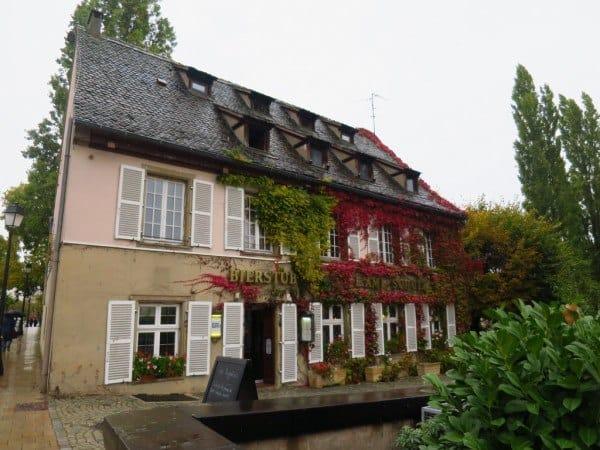 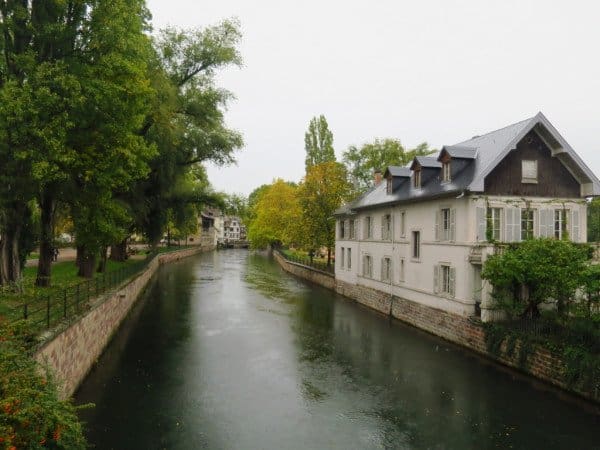 The streets around are abundant in artisanal products – gelato, nougat, gingerbread, charcuterie, terrines, foie gras, patisseries.  This is a nod to the artisan trades that operated from this area in medieval times.

Today, everything is handmade and exquisite.  We stop at the shop selling homemade gingerbread and nougat and partake in a few samples.  It’s hard to resist and I hope the French truly understand and appreciate how lucky they are to have all this incredible food at their doorstep.

The foodie gets burned

I get caught up in the moment and make a rookie mistake.  I find myself drawn to the gingerbread with orange and suddenly I find myself buying some.  “A slice” says the girl bribing me with her samples. “ Of course” I say.  Stirling pops in and says “a small one please”.

Next thing, I am handing over  €20 and getting €0.10 change.  I’ve just paid a fortune for a slice of cake!  Remember I’m not earning euros so it’s more than this in my own currency.  I normally don’t worry too much about conversions, but this one hits me in the face because I’ve been a little rash.  How could a piece of cake be so heavy!  Even funnier is the fact that I normally don’t even really like gingerbread.  This one had better taste as good back in the motorhome as it did in the shop!!!

Strasbourg also plays an important role in the political landscape of the European Union, being the seat of the European Parliament and the Council of Europe.  It is known as one of three capitals of the EU.

After a really full day in Strasbourg, we were ready to head back to the comfort of our motorhome.  No fancy France Passion stopover for us tonight.  We decided to stay in-situ at the Jardin des Rives Aire, along with 20 or so other like minded people.

4 thoughts on “A day in Strasbourg France”