“The early bird catches the worm” as they say, and today we definitely did.  Our “worm” was getting to the Tyne Cot Cemetery near Ypres in north-west Belgium before anyone else arrived.  In the grey, misty morning, clouds hanging low overhead, it was just us and the lone gardener, preparing for the day.

Tyne Cot Cemetery is the most visited World War I site in all of Flanders Fields, so to have it to ourselves was quite special.  And, whilst I completely understand that this site should attract plenty of visitors to keep the history alive, I can’t help but feel ok with my selfishness of just wanting to be here alone.

It’s a sombre site.  The largest Commonwealth War Graves Cemetery in the world, it has almost 12,000 graves.  Sadly, 8,374 of these sites are for Unknown Soldiers.  Soldiers who were not able to be identified and therefore not given a proper burial.  Soldiers whose parents and family were not able to say goodbye properly.

“Many had lain unburied for years and all clues to their identity had been lost.  These unidentified dead – more than 40,000 – account for one third of the marked burials in the Salient’s cemeteries today.  The headstones inscribed  A SOLDIER OF THE GREAT WAR, KNOWN UNTO GOD can be found in profusion”.  [www.cwgc.org]

In what seems like an unusual act, there are four German graves located here.  These belonged to soldiers who were injured and treated here when the war ended.  The pillbox that now has the Cross of Sacrifice adorning it, was once used as a dressing station for injured soldiers.

Situated right in the middle of the cemetery grounds (the cross is visible in the centre of the main entrance), is the Cross of Sacrifice.  This cross was built on the top of a German pillbox.   Pill boxes are concrete fortifications, often dug into the ground, and used as permanent structures for the firing of weapons.  They were used extensively by the Germans during the World Wars.

Tyne Cot Memorial to the Missing

Towards the back of the cemetery, behind the Cross of Sacrifice, is the main memorial wall, that carries the names of the missing.  There is a domed arch at the end of each side of the wall.  These 34,857 names are representative of:

Other Commonwealth soldiers not named here (and are prior to August 15 1917) are represented at the Menin Gate.

The visitor centre here offers a suite of information about the cemetery and what they describe as a panoramic view over the battlefields.  Having visited quite a few battlefields now, I know (logically) what they are referring to.

With the battles of these fields now left far behind, the areas are now often lush, rolling green plains.  Here, there are corn fields in abundance and small houses.  I don’t know about you, but it just seems wrong to call them panoramic, especially since there could still be the bodies of soldiers buried out there somewhere.  For now, I’ll just continue to think of them as battlefields and give them my respect. 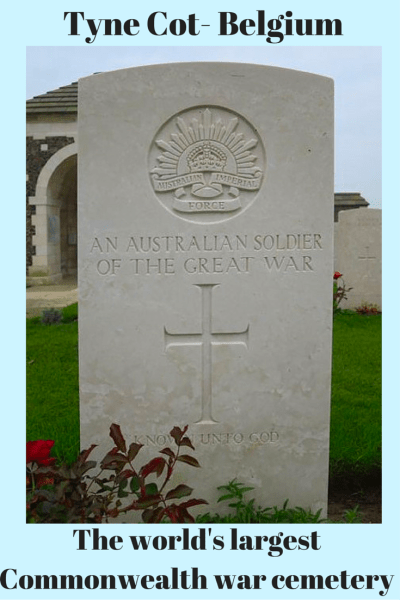 20 thoughts on “Tyne Cot Ware Cemetery:an experience not to be missed”