The vibe on the rooftop was unbelievable.

We had arrived into Athens airport at 8.30pm, worked our way to the metro, turned into a local guide for a number of confused tourists (interesting how a bit of confidence is appealing to others) and got to the main Syntagma square in the village of Plaka by about 10pm. The square was quite literally alive! It was like it was 10 in the morning. Kids, dogs, adults, police, entertainers, you name it. This is a city that definitely plays late.

The concierge at the hotel gave us a wonderful welcome, even guessing who we were, even though there were still eight more people to check in that night. The hotel was also pumping and we soon found out why. It was the night of the supermoon, and people from all over Athens were making their way to rooftop bars to check it out overhead of the Acropolis.

Despite thinking that we were bound for bed once we got to the hotel, suddenly we found ourselves caught up in the whole vibe, and next minute we had dumped our bags, (after several trips in the smallest lift I have ever seen) and had our names in the 9th position on the waiting list for a table. It was worth the wait and worth being up there. The moon, as it overlooked the Acropolis was sensational, and the floodlit Acropolis was one of those amazing sights that you just really need to be in front of to truly appreciate.

Having imbibed a couple of the local beers, and feeling very pleased about our choice of hotel, the flights from Australia, via Dubai, to Athens caught up with us and it was time to have a well-earned rest.

We chose to stay at Central Hotel in Plaka which rewarded us with a fantastic location, comfortable room with a balcony, a great breakfast that included both western and Greek foods, and of course the rooftop view.  It might sound clichéd, but the Greek yoghurt is the real deal in Greece!  I’ve never been a yoghurt fan, but eating yoghurt in Greece has seen me turn the corner.  It’s now a regular inclusion in my diet.  But, having been spoilt by such good yoghurt, it isn’t always easy to find the good stuff back home.

Obviously visiting the Acropolis was high on our list of places to see, particularly after the inspiration from the previous evening.  We had arrived in the summertime here so the temperatures were hot and dry.  We decided to get to the Acropolis nice and early to try to avoid the heat of the midday sun and the hordes of people that would no doubt be there during the day.  Good choice on both counts.  It was 28 degrees when we awoke at 5 am.

We had decided to go on this trip in a really short period of time, and something was bound to get missed when I packed.  At this stage, it seemed like sunscreen was the only casualty.

In a sign of the environment that we are holidaying in, sunscreen was not hard to find, and after a couple of early lessons in how to say thank you (Efharisto) and good morning (Kalimera), we were sufficiently lathered up and on our way.

We walked, the long way I think, up to the Acropolis and were treated with an amazing view and the columns, pillars and amazing architecture of such an ancient civilisation.  Whilst you can’t get onto the buildings, with very good reason, you can get quite close to them all.  This is a major site of renovation and restoration, and ongoing, never-ending maintenance, making the small price of 12 Euro to enter this area incredibly good value. 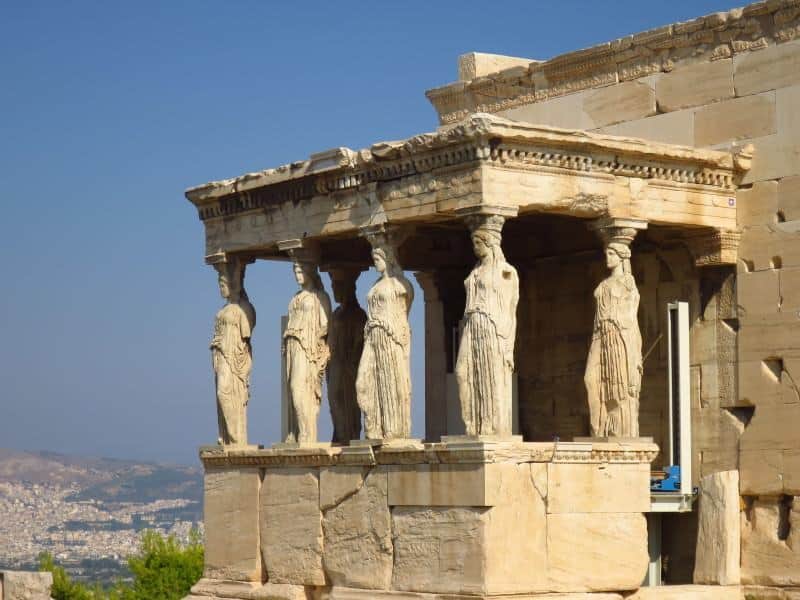 Having absorbed as much as we could from this historical site, we made our way down the hill, much easier than the upward journey of course, and wove our way through the mosaic that are the streets of Greece, heading (hopefully) towards the Olympic Stadium.

We knew we were on the right path when we made it to Hadrian’s Arch, or Hadrian’s Gate, made entirely from marble, and constructed to separate the old Athens from the new.  It also sits on the corner of the former precinct of the Temple of Olympian Zeus.  Since our entrance ticket for the Acropolis also covered the entry into this area, we also diverted off the main road and went inside for a look.

Beware not to sit on any side walls.  I sat on what looked like an edge of the garden, only to find it was actually a remnant of the former precinct wall.  A guide politely asked me to move it!  There’s not a huge amount to see in here save for the remainder of the ancient temple, which ion it’s day had 104 Corinthian columns.  Today, as evidenced by the photo, only 15 columns remain standing. One column lies on the ground, where it fell, after a storm in 1852.

We knew it would be hot today, but I was really starting to feel it.  It was in the early 40 degrees Celsius and humid.  Bottles of water were our constant companion throughout our time in Greece and again, it was easy to find and cheap to buy.  Even at major tourist attractions, price gouging of water was not evident.

Sports lovers the world over will intrinsically know the place Athens has in sports history.  Greece is the place in which the Ancient Olympic Games commenced, then followed by what modern historians would note as the revival of the Olympic Games we know today in 1896, and then as a host nation in 2004.    We were here to get our own sense of this sports history, with a visit to the Panathenaic Stadium.  This monolithic structure, made entirely out of marble, is not only a tribute to sports history but is a testament to engineering and construction design and capability.

Built specifically for the 1896 Olympic Games, it has stood the test of time.  It may not be the most comfortable of stadiums by today’s standards but it has served its purpose well.  I’ve heard some people say that it’s enough to just see it from the outside, but seriously, for the sake of spending three euro, do yourself a favour and go in.  The entrance fee also includes a free audio guide.

Despite its historical nature, you can literally walk all over the stadium. It’s great to do it too as you get a wonderful sense of the expanse it covers, and it affords great views from the very top.  The stairs are plentiful and steep and climbing them in the heat of the day is not the greatest fun I’ve had but it’s an achievement once you do it.  Running on the track is also a must.

We’re not ones for spending much time in museums, preferring to get our history from walking around in it, but occasionally one takes our fancy.  And, I don’t think I’ve ever been able to access a museum through an underground tunnel, made for the entrance of people into the stadium, from the dressing rooms.  In the museum are posters of every modern day Olympics and their associated torches, where the host city has been kind enough to donate back here.

All of that Olympic glory and exercise had created a thirst of Olympic proportions so it was time to head into the Plaka for some food and refreshments of a Greek kind!

It took a couple of twists and turns but we finally found Bretto’s (pronounced Vretto’s), a drinking institution here in Athens. This bar is the oldest distillery in Athens and still operates using an ouzo recipe that is over 100 years old.  We got ourselves settled at the bar with a cold beer in our hand and then started to peruse the ouzo menu.  Yes indeed, an ouzo menu, necessary for the ouzo tastings!  Distilled by Bretto’s themselves and stores in barrels located around the bar, it was something we had to do.  Drinking ouzo, even in taste-testers is something I’m not accustomed to doing in the middle of the day.

Ouzo in Greece is taken very seriously, and not poured down one’s throat ‘shooter style’ like we would be used to seeing.  Here in Greece, ouzo is treated with respect, and drunk with water and ice, turning it from a clear liquid into a cloudy one.  It is sipped, rather than consumed in a hurried fashion, making it the perfect thing to partake in over lunch….or dinner….or whenever the opportunity arises really. My husband also decided that we needed a roadie, so a little bottle of green label ouzo also came with us when we left.

With our thirst placated, it was now time to work on the hunger.  We’d picked up a couple of tips from the Bretto’s staff member, but we felt the urge to walk around the central restaurant area once or twice, just to soak up the theatrical atmosphere of having all the Greek men tout their menus and food offerings to us.  It was like a carnival, with all of them yelling over the top of each other and offering us all kinds of incentives if we were to dine with them.

No surprises, but the restaurant that finally got our business was the one that gave us a tour of the kitchen and showed us examples of what was on the menu.  Most of them also offer free wine as an incentive, which whilst on the surface seems like a good deal, watered down wine isn’t quite so pleasant.  Greek wine is not known to have overtly fantastic qualities, but with water added it takes ordinary to a whole new level.

Lunch was delightful but later in the afternoon, when the heat really hit me, I was thinking I really shouldn’t have had the Saganaki, Greek salad and whole fish, as delicious as it was ! Oh and of course the ouzo as well. The waiter was adamant it aids digestion, but I think it’s just a bit too strong for me !

I’ve never been one for believing in the whole siesta culture, but I must admit to needing to take advantage of it here. Firstly, the days are so long, so pacing yourself is definitely necessary, but with the habits of the Greeks and daylight saving added in, it’s quite easy to be awake and mobile for a very long time. Even when we have tried not to get up early, we are still hours ahead of the locals. They clearly need their later starts to give them the stamina to get through the heat, and to stay up until well after midnight, on any given day of the week !

As quickly as I felt I had over-eaten, I was back in the saddle and preparing myself for dinner.  But, since it was about 9.30pm when we ate, I was happy in the thought that at least some of lunch had digested.

Our hotel location was such that we didn’t have to walk too far to find somewhere great to eat, and tonight was a typical Greek Taverna, called METPOIIOA, located on the corner of a delightful little square bordering a Greek Orthodox Church.  After enjoying what was the first of many souvlaki meals, it was time to rest our somewhat weary legs and prepare for another long day in the heat exploring Athens.