Lyon was to be the centre of our attention today as we hadn’t been here since 2005 and we were looking forward to returning. With some memories of what the city looked like, it would be great to see it again. This was to be one of our smaller driving days so it should all have been reasonably carefree. We left Maçon slightly later than usual, as I was keen to extract as much wifi as I could to get some things done.

As we got closer to Lyon I caused my husband to take a wrong turn so we had a diversion or two to make before we got back on track. I should have realised then that things were starting to fray a little. We got into Lyon with no further worries, but, we just could not find a park. We had probably been a little disorganised in terms of planning today because I was focussed on other things and so we let ourselves down in terms of our preparation.

Lyon is a beautiful town, situated either on or between the rivers Saône and Rhône.  There is the old Lyon and the new Lyon.  Both are very different, and if you are visiting, it’s really the old town that you want to see. For an hour and a half we drove around the newer part of Lyon, occasionally crossing to the older side looking for somewhere to park our motorhome.

Ten years ago I remember parking in the new side and walking across the river.  Ten years on, there are plenty of parks, but they are made to snugly fit cars of miniature proportions, and they are all time controlled.  Some allow parking for three hours, others only an hour and a half.

We realised this after we finally found a park that we could safely fit it, only to realise it was limited to 1.5 hours. By the time we got into the old city it would be time to come back again and I hate bowing to the time lords when I am over here.  Frustrated and hungry, we needed another plan.

We decided to drive to a camp ground, 7.5 km on the south western side of Lyon. When we arrived at about 2.15pm, they were closed for siesta ! It just kept testing us.  As we sat and wondered what our next move was, a lady returned to the reception area and despite it not being open, she was ever so helpful and got us all sorted out.

With our pitch settled for the night, and our newly purchased bus tickets in our hand, we set off on the 10 minute walk to the nearest village of Saint-Genis Centre.  Thirty minutes later we were in the heart of Lyon and in the search for food before we could think of doing anything else.

We spent the afternoon wandering through the lanes and streets of the old town of Lyon.  It offered us so many opportunities for snaps of old churches and stunning buildings and the Basilica Notre Dame  high up on the hill, easily reached by funicular.  The cobblestone streets were being traversed by hundreds of tourists, making their way into major squares such as Bellecour, the brightly coloured red square that I remember having a coffee in all those years ago.  It was also the location I remember turning around and seeing my father posing for a photo with a street clown.

Further onto the old part of town, St Jean Place and its similarly named Cathedral drew large crowds of people, watching the whitewashed walls twinkle in the sunlight that had descended on Lyon today.  Inside, the stained glass windows, and centuries old buttresses decorated the church and showed it off in all its glory. I’ve seen so many churches now in Europe that I’ve completely lost count.  What I do know however is that each and every one is different and ever so spectacular in their own right.

Ducking down a small street it seemed wrong to pass the little pub offering up a chance to sit outside on the cobblestones with your beverage. Within a couple of minutes we were nursing our pints and sitting back admiring all that went on it front of us.

View from across the river 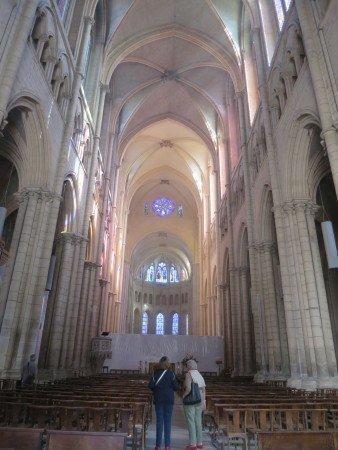 Now we had some serious work to do.  The traboules needed to be found. What’s a traboule?  A traboule is a secret, hidden passageway.  Many of them run between several buildings, connecting them to streets and other buildings.  They are hidden within the buildings. If you know what you are looking for, you can identify the door by a bronze plaque that is placed nearby, usually providing you with some information about that particular traboule. Some have doors that are open.  Others have doors that are not.  In this case, you need to know to press the button to open the door and let yourself in.

Those that live in the buildings have an agreement in place with the local authorities to ensure the traboules always remain accessible. In living there, they must agree to keep the laneways clean, and open to the public until 7pm each night.  In return those who use the laneways must be respectful of those who reside here.

The traboules are all different, some with exquisite balconies, some with unique pastel coloured plasterwork, and some with gardens and courtyards.  Some are only within one building, others run under four buildings planning an entire block. Whatever the case, it’s an amazing feature of these buildings and it was great fun seeking them out and walking through them.

Because we were late coming in today, we had decided to hang out longer and have dinner in Lyon instead of in the motohome tonight. Lyon is well regarded as a gastronomy hub so it was a good chance to explore it all. 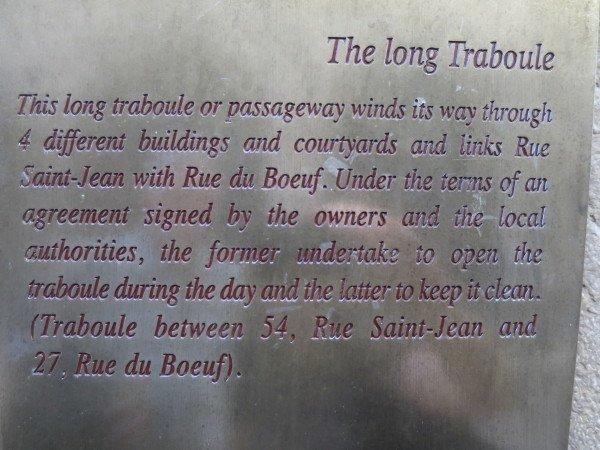 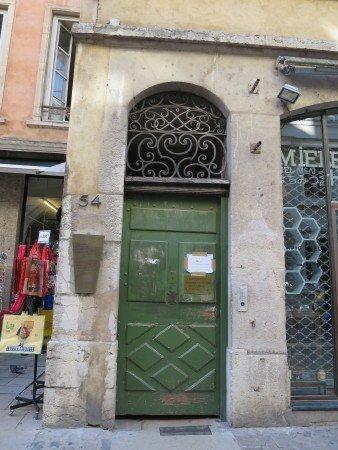 Door to a secret traboule 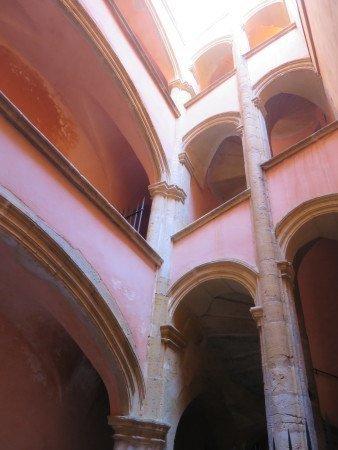 Pastel coloured plasterwork inside a traboule 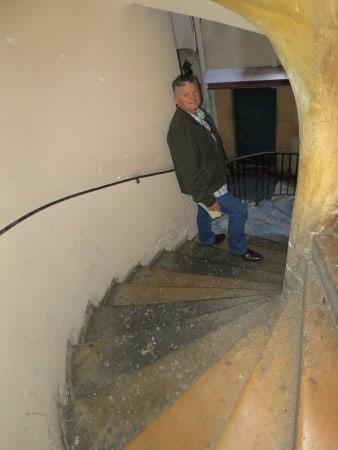 spiral stairs inside the traboule 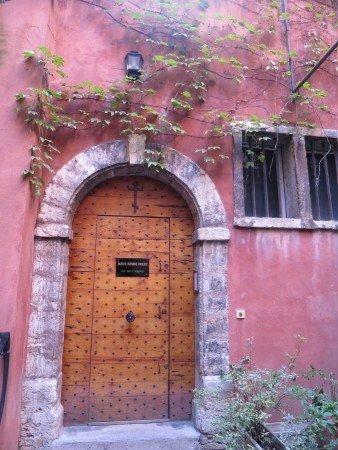 Inside the rose traboule 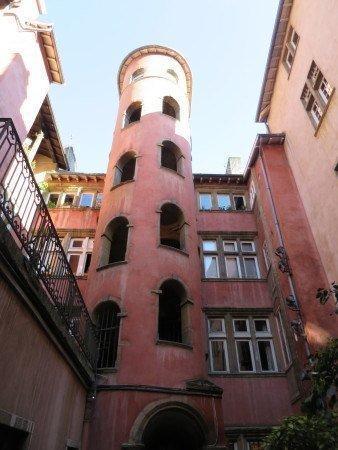 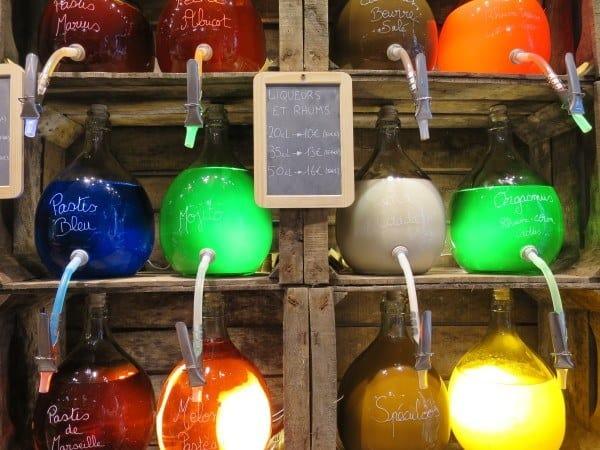 Liquers by the bottle

One aspect of Lyonnaise food culture is that they have a very traditional and specialised range of foods that are renowned here.  Known as lyonnaise cuisine, this type of food is not really my style.  I’m happy to try my hand at most things, but I had to draw the line here.  Andoullette (tripe) sausages, boudin noir (blood sausages), kidneys, Lyonnaisse saucisson,  quenelles (fish dumplings ) and a few other things that made my stomach turn, meant we weren’t eating at a Bouchin tonight.

After a drink at a new bar called Plein Sud, we were the first to arrive at Le Winch, one of many restaurants along rue  Mercière. With a hankering for duck, we did something that we don’t often do and ordered the same thing, along with a serving of L’oignon soup for my husband.  As we sat in the fading sunlight, our apéritif arrived. A Kir. I had been waiting to try one of these also.  Made with a blend of white wine and the locally made liqueur Cassis, the drink is unusual but not unlikeable.

When my duck arrived, I realised immediately that I had forgotten to say ” bien cuit” or at least “mi cuit”. My duck, an enormous breast, covered in a delicious red berry sauce, was medium rare at best. After getting over my first heart attack, I got over it and started to see if I could eat it. It actually wasn’t too bad, although the very rare pieces made their way to my husband’s plate.  As we ate it we couldn’t help but notice yet again how large the ducks are in France.  The fat in this piece alone was over an inch thick! Makes our ducks back home look like pigeons.

It was a very good meal washed down with some equally good Cotes du Rhone red.

The frustration of earlier in the day had definitely abated and by the time we caught our bus back to the village and walked back to the camp ground, it had turned into a pretty good day. 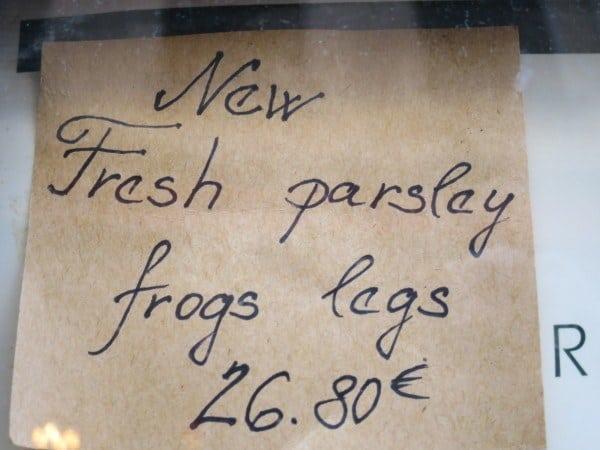 dinner at Le Winch and some amazing canard