A day out in Mechelen

About an hour away from Brussels our journey takes us to Mechelen, another hidden gem in Belgium.

It’s another small town, tucked away from mainstream tourism, but in my mind, just as beautiful as a city like Brussels.  Actually, it’s probably more beautiful because it’s smaller, easier to get around, and you can cover so much ground in one day.  This makes it a perfect town for a day trip from Brussels.

Despite it being freezing, we are still mad enough to ride our bikes into the town.  The locals, of course, make it look so easy, and if they didn’t ride their bikes in this weather, they would probably never leave their homes!  If they can do it, then so can we!

Walking through the Beguinage

The Beguinage is an historical area in a city containing a collection of small houses, that sit on narrow streets. Many centuries ago, men left their wives to go off on the crusades.  Many never returned.  Soon, the women outnumbered the men and many of them elected to live together in the small houses, living like nuns, but without the lifelong vows.  They were given the term beguines.

Beguinages exist in many Belgian cities and are noted as being small or large.  Irrespective of size, they are all worthy of a stroll through them, if your time permits.

The original “large” beguinage, built outside the Mechelen city walls was destroyed, and this one built in its place.  This more recent beguinage commenced being built in 1595 and has since been declared a UNESCO world heritage site.

It contains an amazing baroque church, several convents, many small houses, and narrow cobbled streets. With tiny doors, leading into tiny houses, these photos don’t do justice to the size of these buildings. Many of them felt as though they were barely extending over my head.

This baroque church was designed in 1629 and reflects the one-time wealth of the beguinage people.  Despite being covered in scaffolds when we visited, it was interesting to see how the restoration work is changing the face of the church.  Note the whiter facade at the top of the church against the bottom half.

A stop at the Het Anker Brewery

Having sampled a glass of the Golden Carolus Classic the night before, we headed to the brewery that is responsible for producing this ale.  It’s daunting enough ordering beer from Belgians.  Ordering in a brewery adds a whole new level to the fear.  The people that work here know everything there is to know about their beer, and about beers in general.  My request to try an Anker beer was therefore met with a rather odd look, a frown and a comment that made me feel like a beer drinking novice.  She wasn’t rude and didn’t mean to be.  It’s just that they are passionate about their beers, and apparently what I was about to order rates quite a way down on the “best beers to drink” list.

We were quickly given the beer bible, a professional looking portfolio noting all the beers on tap and their relevant characteristics.  Upon consultation, my husband opted for another Golden Carolus offering, this time a Tripel, a beer with a strong aftertaste, full body and a high level of fruitiness.  Me, well despite the fear of further ridicule, I still chose the Anker.  And, whilst I am quite sure it doesn’t live up to their expectations, it was still a refreshing ale for me.  After all, it was only 10 am, so no need to be into the heavy beers quite yet.

You’ll note in the photo the presence of a whiskey glass.  Despite the early hour, we were in the brewery and it made no sense to have to come back later to try their prized whiskey.  Made from the mash of the Golden Carolus Tripel that we had just ordered, this whiskey is smooth and refined.

Otherwise known as the Fish Market, this was where fish was traded in the main square dating back to the 1500s.  Today, there are still a few excellent fish shops on the square, selling some incredible food and fresh seafood.

I am not a huge “shopper” when I travel.  I spend most of my money on travel related exploration and food experiences.  If shopping is your thing however, there is a very nice street, called Ijzerenleen, that runs from the Koren Markt to the Grote Markt.  Beautiful buildings line the streets, and local fashion stores fight it out with the major chains.  There are also some wonderful food stores worthy of a visit, especially if you love cheese.

And just to prove that the Belgians also take their bread very seriously, we found a 24-hour vending machine, just in case you get to the bakery and it’s closed.  Good for unsuspecting tourists perhaps during siesta time.

Why can’t I buy something easy to take home?

We did make one special purchase, however.  Taken as we were with the Stella Artois glasses we drank from in Leuven we were now keen to try and find some of them.  Because these beer glasses were very old, they weren’t going to be something we could find in one of the ubiquitous beer stores in Belgium.  Rather, if they were going to be found at all, they would be in second-hand stores.  Luckily, there were quite a few in this main shopping street.

To our absolute delight, we found some in one of these stores.  They weren’t exactly the same, but they were old and we loved them.  And, they were the bargain of the year at €3 each.  Or so we thought.  We took two glasses up to the counter to pay for them and the lady there asked were we taking the rest.  The rest?  It seemed that we were in for an even bigger bargain.  All six glasses on the shelf were part of the €3 price tag.

Suddenly I found myself trying to cautiously place six fragile glasses into my handbag.  Today, of all days, I had decided that I didn’t need to carry my extra shopping bag with me. The second-hand shop didn’t have plastic bags (as is the case in most of Europe), so I had no alternative but to put them in my bag.  Lucky I guess that I’m not someone who carries a tiny handbag!

It’s also quite typical of us to buy something fragile when we travel and have to nurse them all the way back home.  To complicate matters this time, we still had weeks to go on our motorhome trip, where we had limited space.  If these get back home without being broken, we will have achieved something great!

So much more to see in Mechelen

There is no end of things to see and do in Mechelen, however, our day of rain meant that some of the things we wanted to do were made difficult.

With the weather preventing us from doing a few more things here, it was time once more to head for the next town.

With the rain continuing to fall, we drove the wet roads towards Antwerp.  We had added Antwerp to our list quite late, but we were ready to spend some time there tomorrow.  Tonight we were staying at a former campground, that was built in readiness for the Antwerp Expo some time ago.  Today, Camperpark Vogelzang  is known more as an “aire”, with limited services, but nonetheless a great place to stay the night.

Been to Mechelen?  Share your stories and experiences here with me by commenting below. 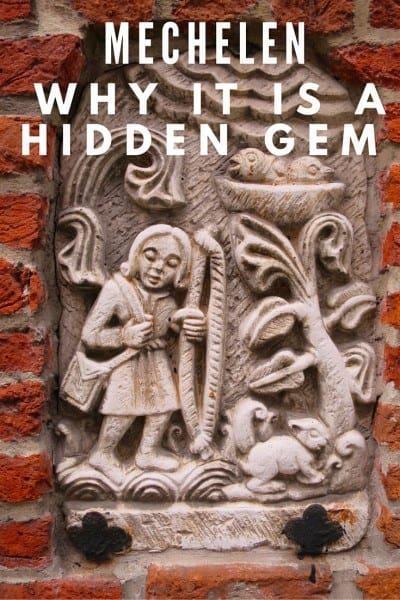 6 thoughts on “Mechelen: another hidden gem in Belgium”