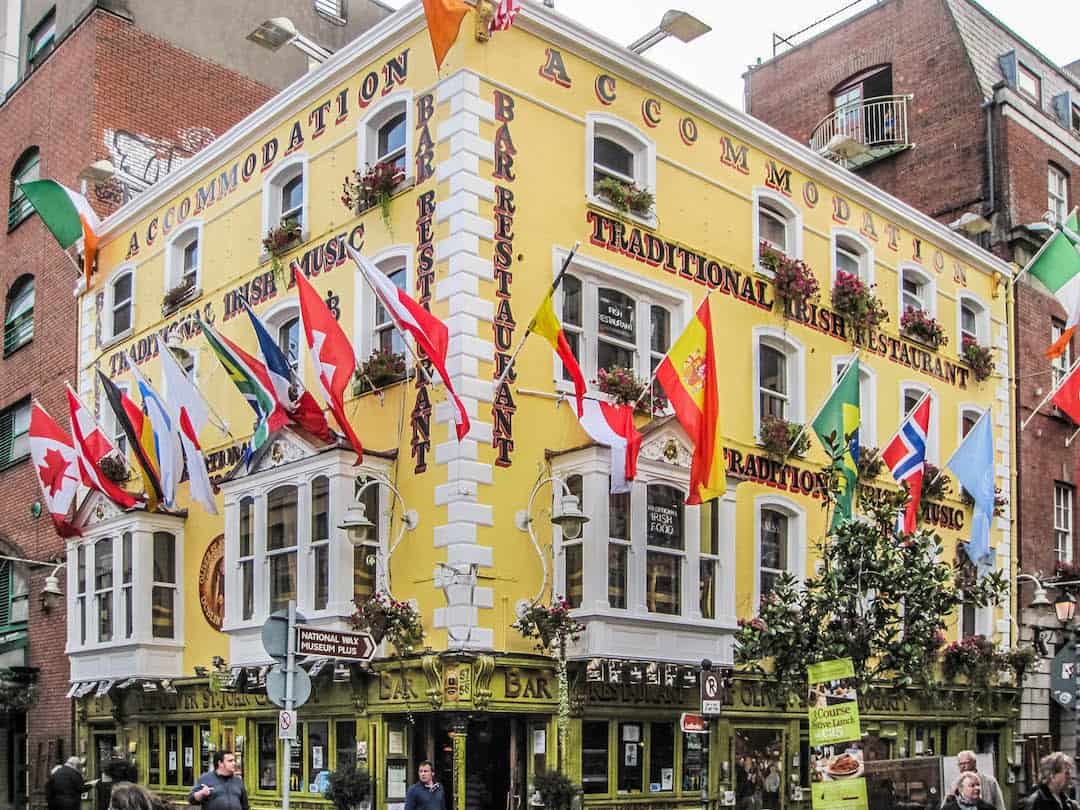 Planning a trip to Ireland

Travelling is quite often a trip into the unknown, especially if you are heading to a country that is very different to your own.    The great thing however about travel is that you can usually always find a destination that suits your own personal preferences.  Many destinations are quite clearly identified as being most suited to a certain type of person or a particular age demographic.

Ibiza, in the Spanish archipelago for example immediately brings an active nightlife for a younger age group to mind.  Conversely, a bus tour through a European destination might make people think of an older group of travellers.

These days, however, travel has come such a long way, that these stereotypes are being eroded, and people of all ages, all backgrounds and with diverse interests are all travelling to some amazing locations, building their own itineraries.

Not surprisingly, Ireland is a destination that has something for everyone.  The easy-going personalities of the Irish make travelling here so easy.  The diversity of the country when it comes to natural landscapes, history, culture, food and of course, their famous Guinness and whiskey make it an exciting destination.

Ireland is also perfect for that quick weekend break (if you live in a European location).  Its rich landscapes set it up for an epic road trip, either self-drive or on a tour.  It’s also a great place to explore all that nature offers with hikes along cliff tops that offer amazing views and hiking trails for both the fit and not-so-fit.

Let’s have a look at some of the key reasons for making Ireland a holiday destination.

The Irish are friendly.  They will tell you they are the friendliest in the world.  I’m not quite so sure about this, but they are indeed welcoming.  I still remember my first visit to Ireland.  I was at the Immigration processing area with Stirling.  The person who looked at our passports told me that he would let me enter Ireland under one condition.  Intrigued, I bought into his game and asked what that might be.

“You see this man here beside you”, he said, pointing to my husband, “wherever you go in Ireland, you must ensure that you allow him to drink as much Guinness as he likes, whenever he likes”.  It was an unusual comment, given most of these officials can barely raise a smile when you are with them.  However, it was a comment that most definitely brought a smile to our faces, was indicative of the type of people we came across, and a moment I’ve never forgotten.

The Irish love to joke and love to have a good time and it’s very easy to get caught up in it all.

As an island in the middle of the North Atlantic, there are plenty of opportunities to explore the breathtaking scenery that the coastline provides.  Locations such as the Wild Atlantic Way, on the Irish west coast, is fast becoming a “must-do” on any visit you make to this country.  Magnificent cliffs that drop away to the ocean, inlets and bays where the weather seems a little less wild, and small towns and villages to pop into along the way.

The Wild Atlantic Way provides perfect road trip material, allowing you to stop in anywhere you like, making this a leisurely place to travel.  The Wicklow Mountains brings a true sense of Irish country life.  I remember walking the cliff trails of the eastern parts of Ireland too, not far from Dublin, and thinking it was simply heaven on Earth.  For epic cliffs, the Cliffs of Mohar are a must see.

If getting into the Irish countryside is of interest, consider taking in the Ring of Kerry, a circuit that picks up the coastline, the beaches and the more rural parts of the country.

Once upon a time, Ireland was probably slated as being great for stodgy types of food and burgers!  I remember burgers being big the last time I was there.  Not surprisingly I suppose since they go so well with beer.

It’s always great to try the traditional foods, and servings of Irish stew with soda bread always makes for a hearty meal, especially if the temperature outside is less than favourable.  Colcannon is a regular in traditional food places.  It’s a mix of potatoes (never too far away from an Irish meal) and kale or cabbage mixed with butter or cream.

Both black and white pudding feature prominently although, with blood mixed into a blend of pork, fat and other fillers, you’ll never see me eat it.

Ireland is fast becoming known for having great food.  With a country rich in fresh produce and seafood, chefs and restaurateurs are now bringing a new type of fresh cuisine to the table.  Farmers markets are popping up all over and food trails are now one of the highlights of a travelling foodie’s travel plans.

Of course, there’s still plenty to love about sitting down in an Irish pub, having a pint or two, and tucking into some traditional fare.

Love it or hate it, you can’t come to Ireland without drinking some Guinness.  Now, whilst I love my beer, drinking Guinness is not something I can warm too.  However, I did my best and gave it a shot, with the barman even adding blackcurrant syrup to it as apparently “it tastes better”.  I had to disagree.  Drinking Kilkenny down in Kilkenny (where else) is also a must-do for beer lovers.

For those with a refined taste for spirits, a whisky tasting tour would be perfect, with famous names such as Jamesons and Tullamore heading a fine list of distilleries open to the public.

With U2 as possibly the most recognised Irish band in the world, it’s little wonder that the music scene in Ireland continues to thrive.  The pubs regularly have live music, further cementing these establishments as being an integral part of the Irish culture.  The music can be spontaneous too, with pop-ups happening around the streets.

If you’re up for it, Saint Patrick’s Day, a national day celebrated by the Irish on March 17 each year is when the country really comes alive.  Everywhere turns green, plenty of beer is consumed and the party atmosphere takes over completely.  Having celebrated Saint Patty’s Day in other parts of the world, I can only imagine how crazy it would be in the country of origin.

The nightlife is there for everyone to join in, not just a mainstay of the young crowd.  With thousands of pubs and bars all over Ireland, there is quite literally something to suit everyone’s taste and everyone’s age.

Ireland is also full of castles and beautiful churches.

It’s known as a haven for fine literature with many famous writers and poets either being born or residing here.  There are amazing libraries too and of course, Irish folklore is an important part of understanding the country (as well as it creating a shroud of mystery and fun)

With the beauty of Ireland as a backdrop, people come from all over the world to play golf.  Surfing is also huge given the breadth of their coastline and the waves of the North Atlantic.  Ball sports like rugby and rugby league also attract a loyal following.   Organised tours to key world sporting events that occur in Ireland are usually sold out well in advance.

There are so many places to see in Ireland that it’s so hard to see it all in one trip.  Doing a self-drive would be a special way to see the country, or if you are wanting a little more organisation to take the worry out of your trip, then there are some great organised tours in Ireland.

As you know, our style is more independent, but there are definitely times when a tour can be the right approach.  I remember doing some of our own travel in and around Dublin, and then jumping on a quick tour to get down into the south.

CIE Tours in Ireland are great for offering tours that provide just that little “something extra”.  The thing I like most about them is that they aren’t just about sitting on a bus.  All tours are designed around the specific locations, giving plenty of opportunities to really see the area you are visiting and have time to explore.

As they move with the times and expectations of travellers, they also offer luxury private chauffeur tours and tours that are more based around independent travel, such as self-drive tours or their special “Go-as-you-please” package where you self-drive and stay in local B&Bs.

A visit to Ireland is most certainly not complete without spending some time in Dublin.  Yes, it’s known as a bit of a party place, but it is also rich in historical buildings, has beautiful architecture and a vibrant student scene.

Head into the countryside next

We are spoilt for choice when it comes to beautiful countryside in Ireland.  This is where a self-drive road trip or an organised tour of Ireland can really help you see as much of Ireland as your time will allow.

Cities like Kilkenny have a bit of everything.  A village feel, a beautiful castle, lush, green countryside and Kilkenny beer.

Enroute to Kilkenny from Dublin, there are also many places worthy of a visit, many of which are not on the usual tourist trail.  Take the Brownshill Dolman for example.  Whilst many will be familiar with Stonehenge in England,  less are aware that a similar type of exhibit can also be found in Ireland.

The Brownshill Dolman is known as a portal tomb dating back centuries and thought to be the heaviest in Europe.  One can only sit and admire these and wonder how on Earth they got there.

Further south, near Glendalough, is the monastic ruins of a settlement dating back to the 6th century.  Here you can walk through the grounds and around the lake, discovering ancient tombs, crosses and ruins.

Nearby Glendalough Hotel does great tea and scones.

Where will you go?

These are just a few highlights of Ireland.  For further information on some of the best locations in Ireland, check out this list.  I know I have so much more of this beautiful country to see.  Whether you are a first time visitor or a repeat traveller, if you are planning a trip to Ireland, there’s something for everyone and there are so many ways in which you can travel to suit your own travelling style.  What part of Ireland do you think you will see first?