I got up early hoping to see some cows being milked but I was out of luck.  A little later we rode our bikes about four kilometres on a return journey to the boulangerie.  We wanted to be extra quiet to let the hard working farmers have a rest but they were up and at it all long ago. 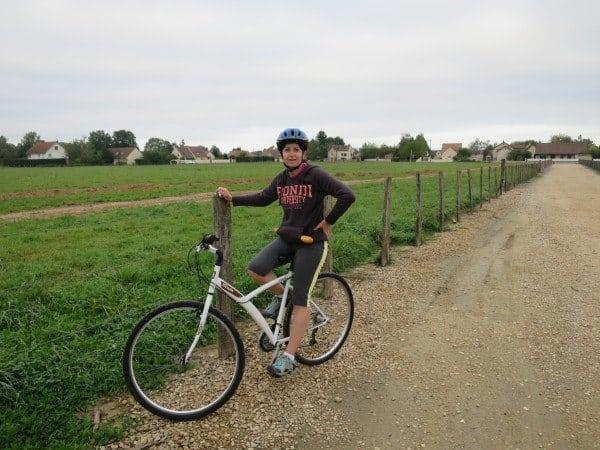 Back after riding to get breakfast.  Note the ficelle in my front pocket! 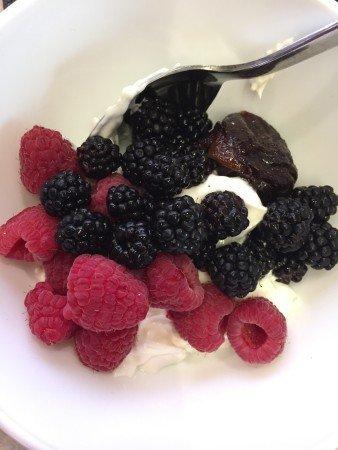 Our handpicked blackberries with some market raspberries

Our croissants this time were more bread like, not as buttery and flaky as we are used to.  It left us wondering whether these are a regional variation, which can happen, or whether they had something go wrong.  They were ok, but didn’t pass my perfect French croissant test. I think I will just need to keep eating them to test further !

Today we continued our journey through Burgundy, with an aim of making it to Maçon, just a little way down the road. 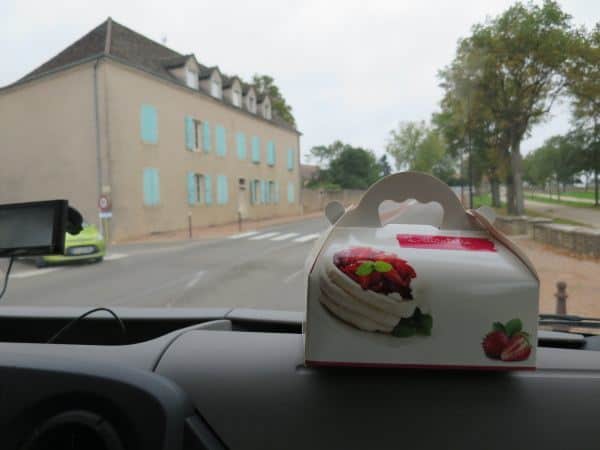 Our millefeuille with prime position in the motorhome 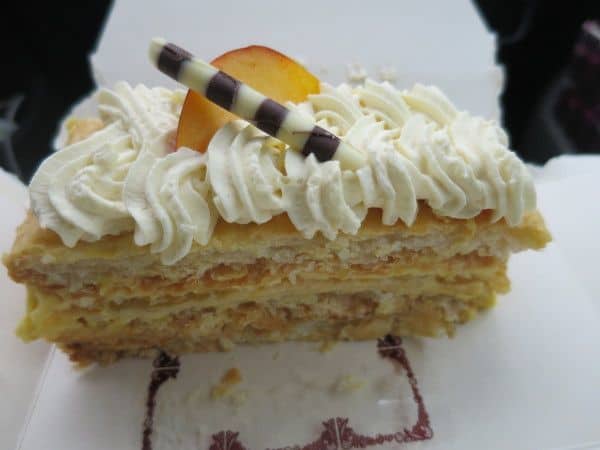 We needed more electricity tonight as the hour we got at the Aires de Service went nowhere with my MacBook.  I also needed wifi. So, we decided to stay at our first campground for the trip.

This camp ground was flagged as being 4* and I think that was accurate. With a great location only three kilometres out of town, plenty of trees, grass lined pitches, several amenities blocks and excellent wifi that could be used in your motorhome, it was indeed worthy of 4*.  The only negative, and this will always be the case with me, is that their hot water wasn’t hot.  Unless it turns my skin red, it’s not hot ! But that’s a suck it up moment, and I am quite sure I will survive.

We rode our bikes, along dedicated pathways into the city.  Being a Sunday there were less people around, and for parts of our day in the town, it was as though we were the only ones there.  On the waterfront, there was a lot going on.  A fishing competition, where they had caught some of the largest catfish we had ever seen was underway.  Fisherman out on little boats in the river trying to land the big one so that they could put it on a specially made tarpaulin and being it to shore. 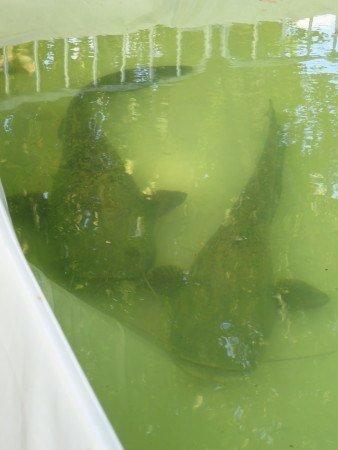 In the centre of the city on the boardwalk, athletes were all gathered around after completing whatever it was they had been doing all morning. Music, announcements, cheers and clapping for those who had obviously done well.  Further up, one of the Avalon company river boats had docked, and its passengers emptied into the town, filling it’s restaurants and bars along the river.

Let’s stop for lunch with everyone else

We too thought that to be a good idea although it became a little more difficult when we realised it was well after 2pm and most of the restaurants had closed their kitchens.  We finally found one of Maçon’s new and very trendy establishments to get a late lunch.

Having a beer in Macon 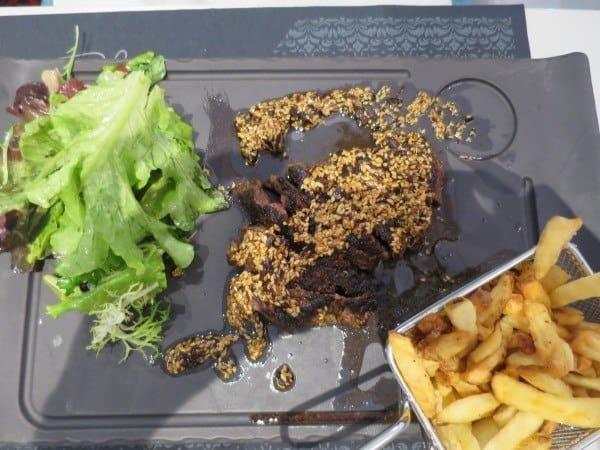 Waterways can bring such wealth to a town. Just having the river boats make your town a destination would make such a difference to the local economy.  Perhaps that’s also why so many of the bars and restaurants that now line the river have been updated.

Two extremely old buildings exist in Macon.  The first is Old Saint-Vincent, a church as old as the 6th century, which has been rebuilt several times since.  Various restorations occurred until in the 18th century it was decided to demolish it.  Today, really all that is left are the two towers.

Nearby is the oldest, completely wooden building in Macon. It’s facade, built entirely from wood is covered in carvings of men and monkeys.

The oldest building in Macon

The Saint-Laurent Bridge is a stunning stone bridge with arches, one of my favourite types in France.  This bridge is one of the few bridges in the region that were not destroyed in World War Two.

Back at the camp ground, we watched in absolute amazement how caravan after caravan came in to park for the night, parking everyone in.  When we parked up, we were the only motorhome for about 10 bays in any direction.  By the time evening came around, we had two spare spots beside us, one each side.  It’s like when you go to a cinema and there’s only five people in there but someone comes and sits right next to you.  It never ceases to amaze me why independent travellers want to park right next to someone else when they don’t have to. Maybe I look at things a little differently ?

Love these shutters on the waterfront buildings