We discovered this morning that our overnight lodging was very close to a riding track that led us directly to a boulangerie.  Who could resist then the opportunity to pull the bikes off the back of the motorhome for the first time, and let the rubber hit the bumpy track.  Off we went, shouting out a hearty morning bonjour to those we came across and mercy to those who kindly (or smartly) got out of our way.

Minutes later we had our bikes parked up at the Gron Boulangerie and were inside surveying the french goodies.  But, as tempting as it all was, we were only here for croissants at this stage. Last thing I needed to do was to fall off my bike because I was overloaded with pastries. 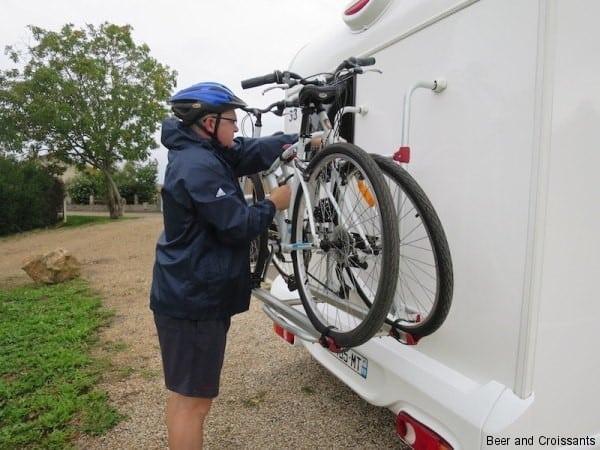 Getting the bikes off the back of the motorhome 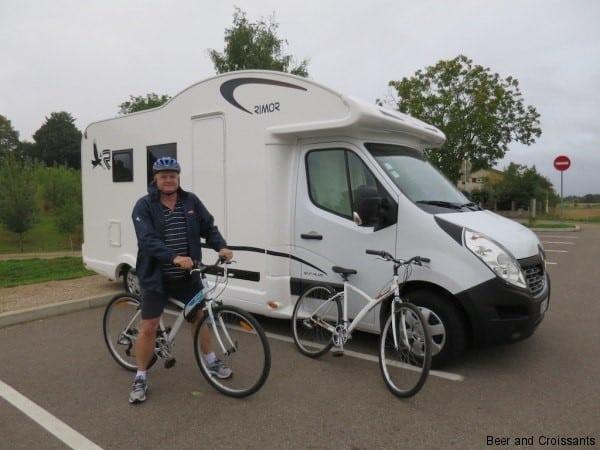 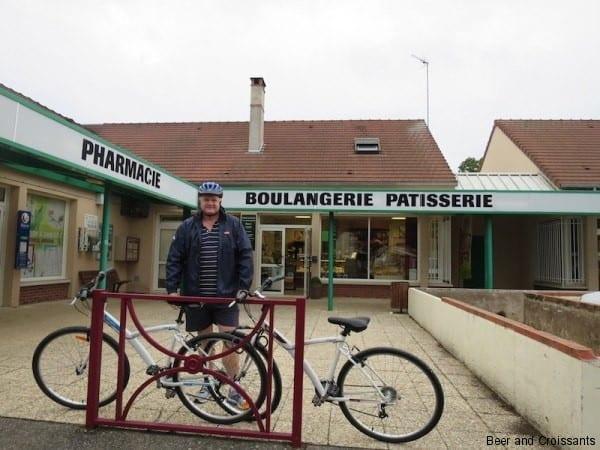 Arrived at the boulangerie

Before long, we were on our way, on day 1 of our trip, heading south of Sens down towards the French Riviera (eventually).  The rain was still around, although it did appear to ease a little more as the morning wore on.

The canals of Burgundy

One of the wonderful features of the Bourgogne (Burgundy) region are the canals and locks.  As we drove along the side roads towards Dijon, the canals followed us most of the way.  At a town called Percy, we took the opportunity to pull up on the side of the road, near the “lock house” to watch several boats make their way through the locks.

On one side we had the Danes coming through in their reasonably new and fancy boats, providing heaps of fun with their antics and conversation.  One gentleman thought he was quite funny posing for an unprompted photo.  The deckhand looked like he was a cross between the “Old Man and the Sea”, or a really gnarly old Richard Branson.

Watching the dedicated “lock man” was fascinating.  With a few simple twists and turns of the large wheels, the enormous steel gates opened enough to let the water from the high side rush through to the low side to let them through.  The Danes were pros at this, with all people on board having their own role and they were clearly comfortable with it.  Their boats helped them as well with side thrusters allowing them to manoeuvre the boats better.

On the other side, parked up, and waiting for these boats to come through were the travellers from the UK, and behind them a boat of Kiwis, spending some time on the canals before getting their dose of the Rugby World Cup later in the month back in Cardiff.  The Brits were a little less active and struggled a little with their boat, a large, heavy thing and without the support of the thrusters.  Hopefully they have good travel insurance to cover the bruises they give their boat.

Whilst we waited for them to get to the lock, we boiled up the kettle and had ourselves a cup of tea on the bridge.  It’s a hard life!

The Kiwis were a happy bunch and were on for a good chat as they waited for the other side of the canal to fill again so that they could pass through.  After a few Australia V New Zealand Rugby sledges they were on their way and so were we.  Or we were until I ran through a patch of stinging nettle on my way back to the motorhome.  Ouch !  Lucky for our first aid supplies on board. 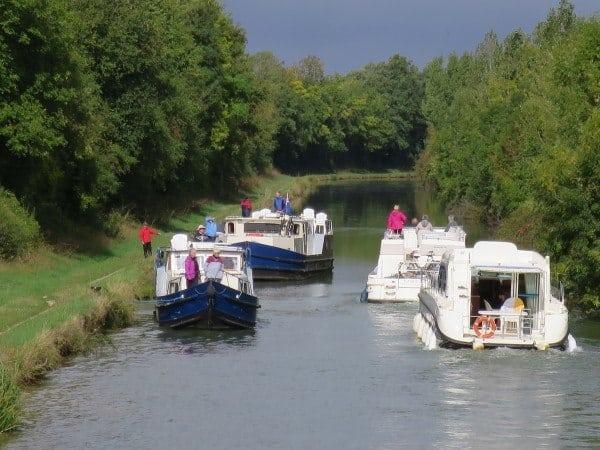 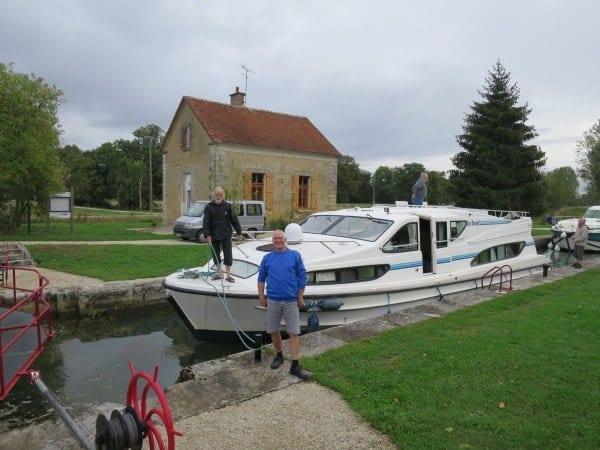 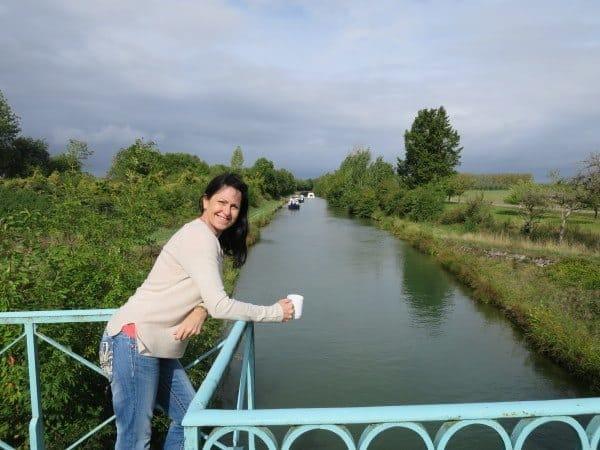 Time for a cuppa

Doing your own thing

We continued to drive through small villages, all incredibly delightful in their own right.  Perhaps one of the things I love best about travelling in a motorhome is the true freedom you can experience by being your own masters.  No-one else’s timelines.  No-one’s itineraries.  No-one’s list of “must-do’s” other than your own.

This means you can stop wherever you like and stay as long (or as short as you like).  It also means that you are more likely to see things that you would never see on a general tourist’s trail, or if you drove the big motorways all the time.  Here, along the quiet country roads, are incredible people and places.

And up pops a chateau

Today, in a town called Ancy-le Franc, we happened upon an exquisite chateau.  When you travel through the Loire Valley, you expect to see chateaus, and there are plenty of amazing ones there.  But to have one just ‘pop up’ is pretty special. 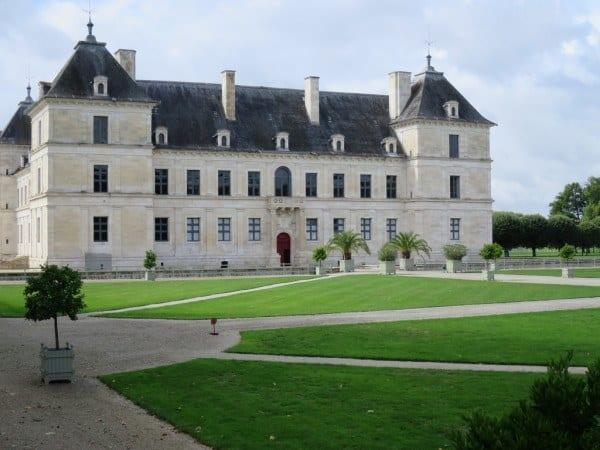 A local market was just packing up for their midday siesta as we walked away from the chateau, but we were just in time to buy some fresh petit pois.  These would go very nicely with our dinner that we were cooking up in the motorhome tonight. 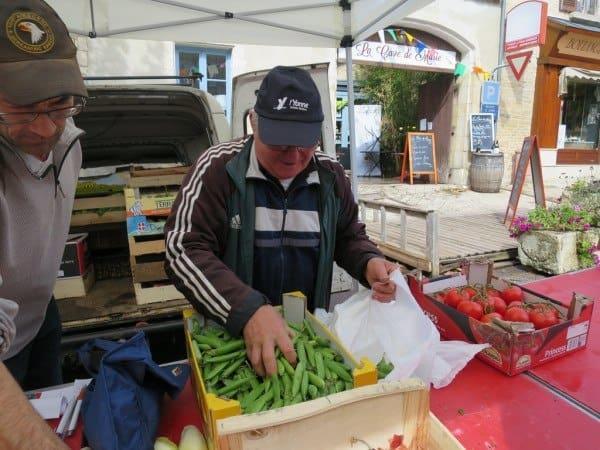 Lunch by the canal

As the boats continued to float past us as though it was a highway, we decided to hang out by the canals once more, this time for lunch.  At St Remy, a parking spot opened up right beside the canal, affording us a view of both it, and a couple of local fisherman and their dog. The view made our fresh baguette and ham, tomatoes and cheese taste so much better.  Well I’m positive it helped.

As we bit into our first baguette of the trip, we couldn’t help but think about the last futile attempt of a store at home to make a “French stick”. I’m not one for travelling somewhere and making fun of our own country but seriously, how can someone be that bad at making baguettes. Oh well, it’s a wonderful excuse to just keep eating as much as we can here. 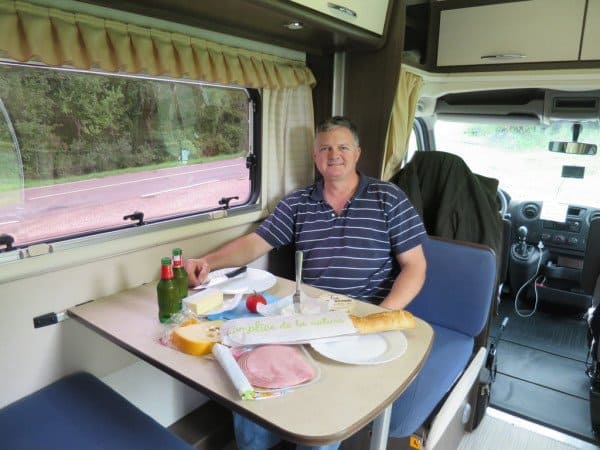 The day was marching on, but we had been seeing so much of this beautiful part of the country, just slowly making our way further south.  Our next stop came at the town of Flavigny-sur-Ozerain.  Such a picturesque town, with old gates and walls at the point of entry.  Largely a pedestrianised city except for the locals, it is also home to the famous Les Anis de Flavigny and is the location of the filming of the French movie Chocolat.

If I was wanting to move to France and to this town, I had just the place in mind with one of the local houses, complete with it’s own turret for sale.

The pastilles were not at all what I thought they were going to be. Small hard white balls, there was almost every flavour imaginable, and I think we tasted all of them.

Strangely, those that I thought would be my favourites, like orange and citron weren’t so nice, but cassis (blackcurrant) and mandarin were yum.  My husband was rather fond of the Anis flavour which interestingly is the original, hence the name. 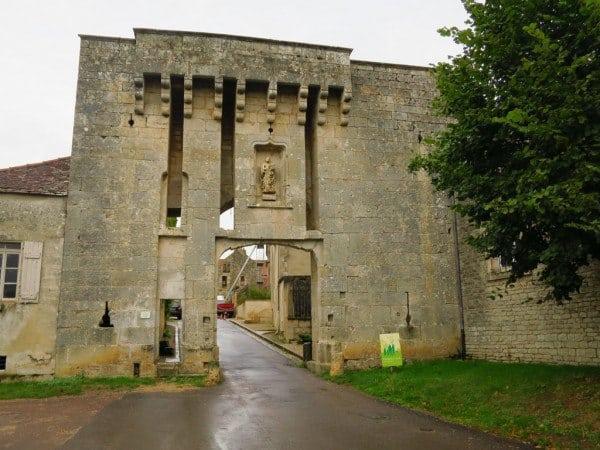 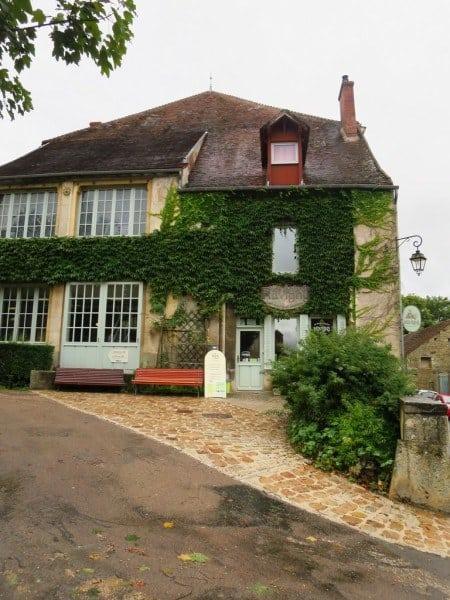 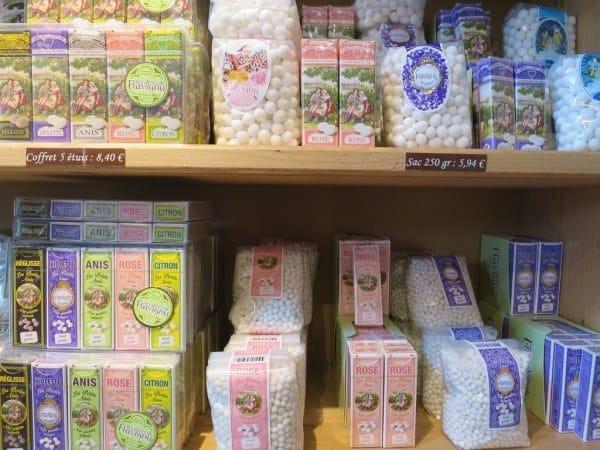 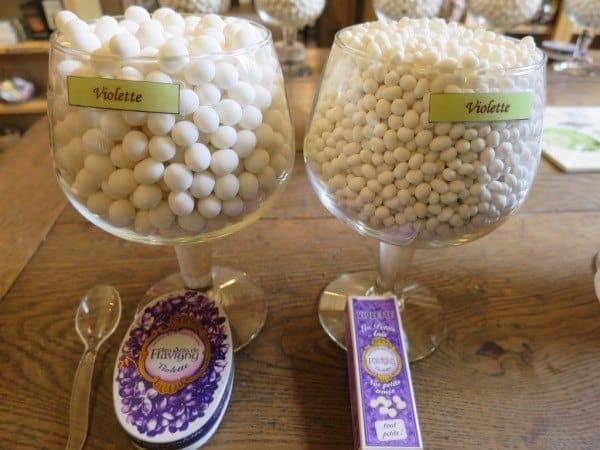 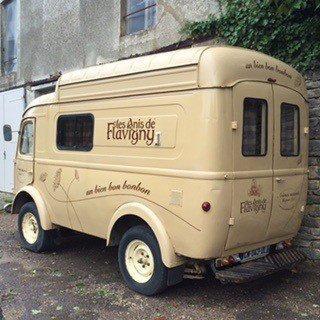 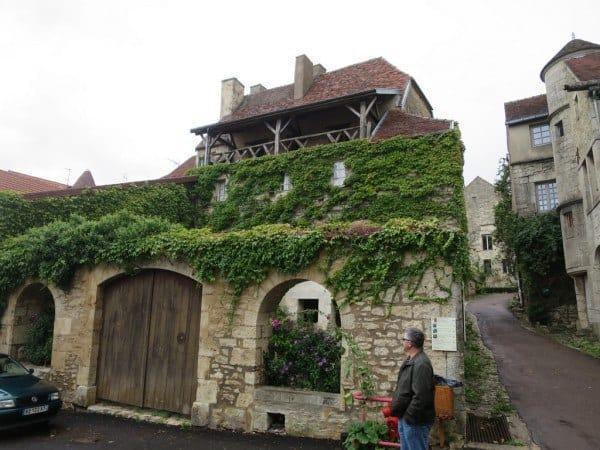 A favourite building of mine in Flavigny 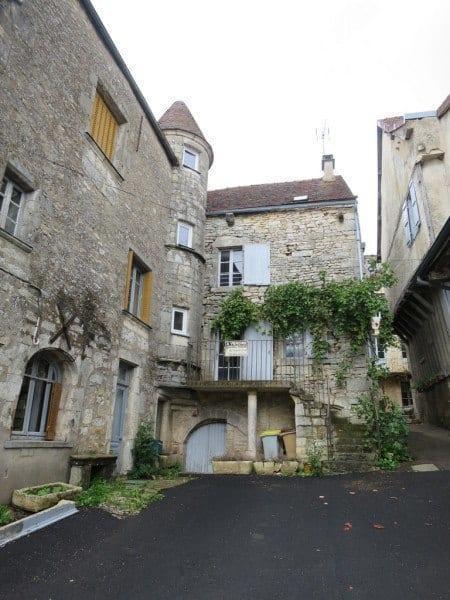 House for sale – love the turret

So who are France Passion ?

By the time we left this little town, it was time once again to find a home for the night.  Tonight it was time to start using our France Passion guide, provided to us as part of the hire by France Motorhomes.

France Passion is an incredible opportunity to get involved in local activities and is especially wonderful if you love food and wine and are here in France to enjoy anything associated with these activities.

For those who don’t motorhome and for those that do but haven’t heard of France Passion, let me explain.  France Passion is a collection of places to stay for people in motorhomes.  Winegrowers, farmers, craftspeople, and even motorhome owners, open up their properties completely free of charge to those wanting to stay.

They ask for nothing in return, so effectively your camp site for the night is free.  Many have access to emergency water supplies and rubbish disposal, whilst others are a little more elaborate. All they expect is a hello and a goodbye,  that’s it.  But the beauty of all of this is that there is often so much more you can do for your hosts to say a true thank you.

I’ll be talking more about the France Passion sites at each place we visit as it is our intention to stay at as many as we can whilst on the France part of our trip. Should make for some interesting interactions.

In this part of France, there are reasonable numbers of France Passion sites, making it possible to choose the best options based on your own interests. It’s also a little easier travelling at this stage of the season, as the volume of tourists that abound in the peak seasons of July and August have long gone home.

Tonight, our first France Passion site, we struck gold.  Vignoble Flavigny de Alesia was located at the bottom of the village of Flavigny-sur-Ozerain.  It’s a working vineyard, and a former labyrinth maze playground.  With the maze now gone, the paddocks are left to the big and beautiful white cows that graze around us.  In front of the operational area is a shop selling a variety of handmade crafts, and also the area for wine tasting.

We went in to say hello and to ask if we could stay the night and we couldn’t have been more welcomed.  Despite the guide saying that English was spoken here, we had some good conversations of mixed English and French attempts, but we all got through.  Tasting wine seems to be a generic language and so we thought we would start off this new friendship over a couple of bottles.  We left with a bottle of their 2011 Pinot Noir under our arm, making the day of our host, and allowing us to end ours on a sweet note also.

Outside we had the whole parking area mostly to ourselves by 5pm, as all of the workers tumbled out of the back sheds, washing off their muddy gumboots before getting into their cars.  In addition, those working in the fields, picking the last of the seasons grapes, came flooding off the main road and into the property. By 7.30pm, the managers had all left, leaving just us and our van to ourselves.

So with a view of the old building on one side and the countryside on the other we settled in for the night. Time to lift the top off a Kronenbourg and a cork out of a bottle of local Burgundy sparkling and red.

By 8.30pm I was falling asleep in my dinner.  The lack of sleep over the last three days of transit from Australia had caught up with me and I could no longer keep my eyes open.  Off to the back of the motorhome and into the comfy double bed. With the shutters up and the curtains drawn, we were once again transported to our own private world, as though we were the only people around.

Highlights of the day 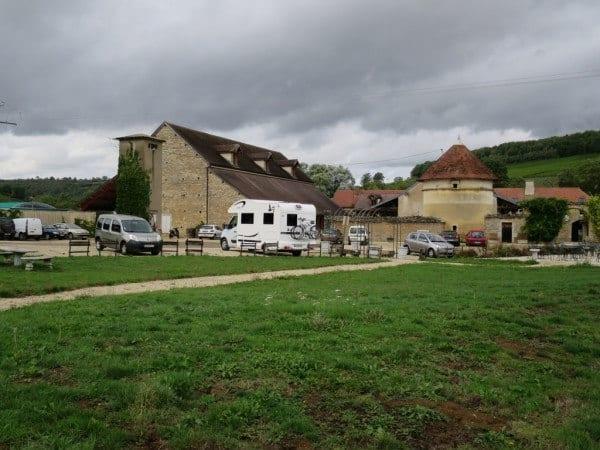 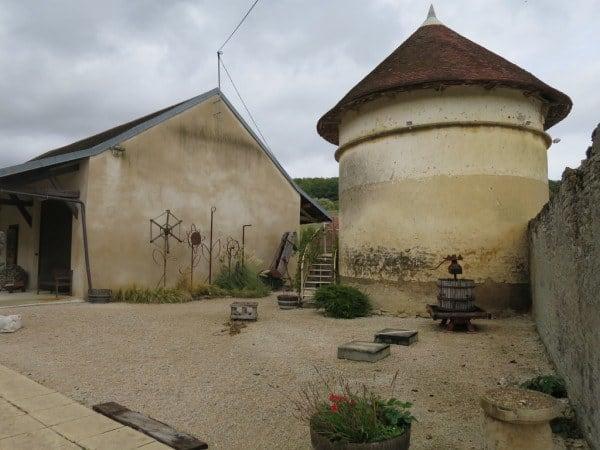 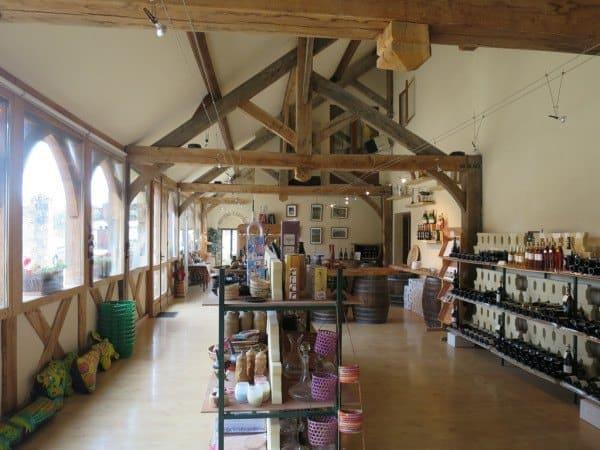 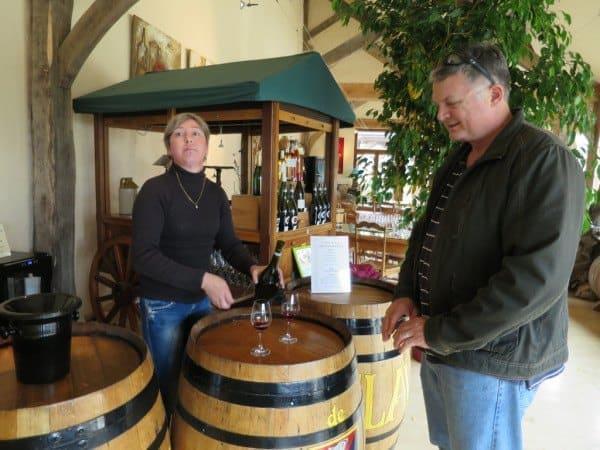 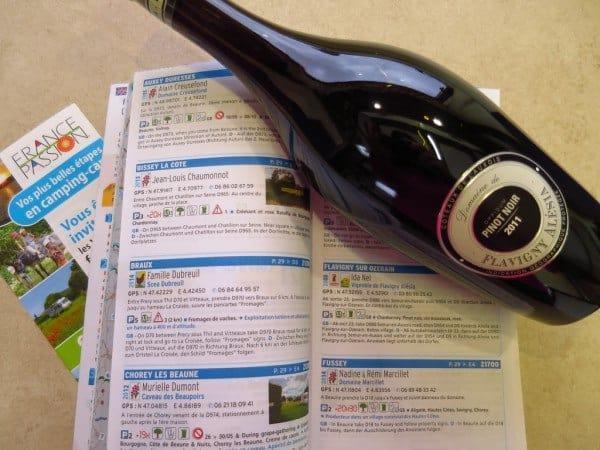 A bottle of Pinot from our France Passion site