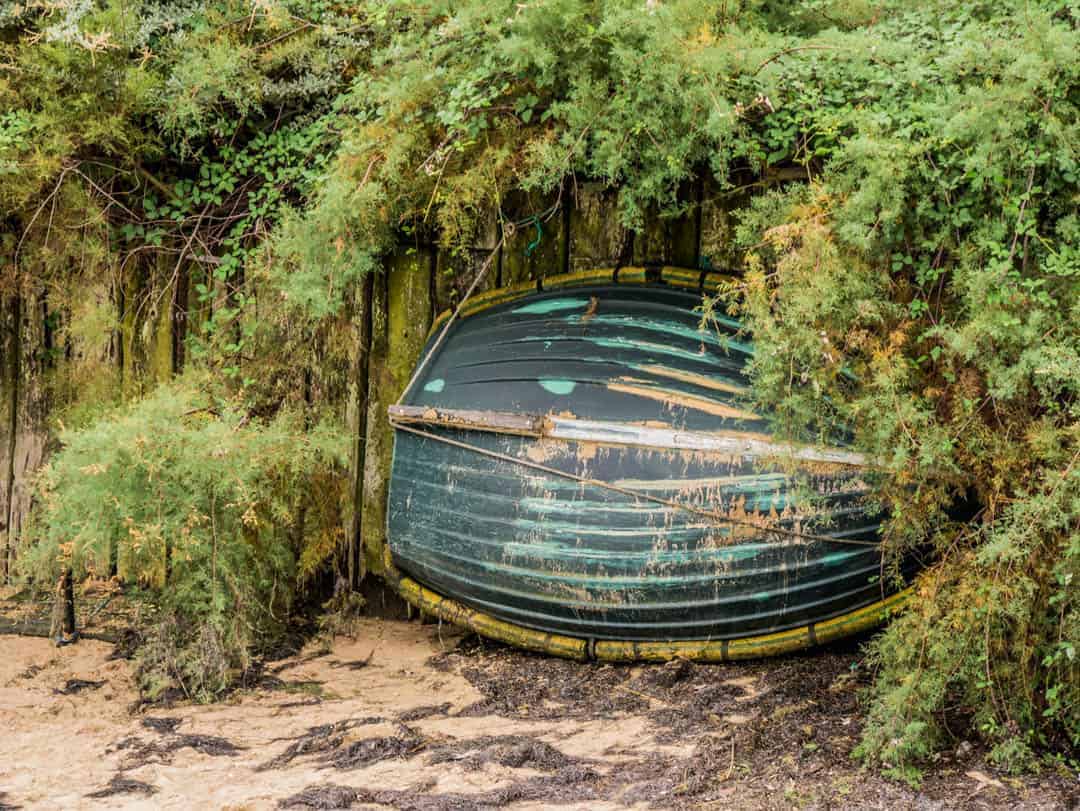 It’s mid-afternoon when we finally leave Bordeaux, having succumbed once again to the calling of the rotisserie chicken from the local markets.  It’s time to continue on our 20-day journey around the south-west of France and this time, we turn our vehicle towards the coast.  We skirt around the edges of this busy city, leaving the chaos of the inner roads for someone else to battle.

We turn her nose westwards from Bordeaux, towards an area little-known to many outside of France.  First, we have to drive through a litany of roundabouts.  On a reasonably easy road to otherwise drive, it feels a little like the roads department had a surplus in their budget one year and elected to build these annoying concrete mounds every kilometre along the D106.

About an hour after leaving Bordeaux (without any kind of major traffic), the road starts to narrow and the scenery starts to look more like a beach environment than that of a big city.  Sand leaches onto the roadway, and the trees dance a little more in the sea breeze.  This is the Lège-Cap-Ferret peninsula, a long, thin piece of land jutting out off the mainland like a dangling arm.

On the west, the Atlantic Ocean keeps things interesting with its wayward waves, whilst on the other side, the Bassin d’Arcachon (Arcachon Bay) is the picture of calmness.  Here, the waters provide the perfect backdrop to many waterside cafes, water activities and a view across to the magnificent Dune du Pilat.

It should not be confused by that other area with a very similar name, Cap Ferrat.  Different by only an “e”, Cap Ferret is everything the other is not.  Whilst the former is flashy and ostentatious, elevated by the celebrities and cashed-up visitors that love to frequent the French Riviera in the south, the Cap Ferret with the “e” is the understatement of idyllic and unassuming.  I’m a little biased though too.  As much as I adore France, having now been in the French Riviera on many occasions, I can take it or leave it, preferring locations like this one to have a real French experience. 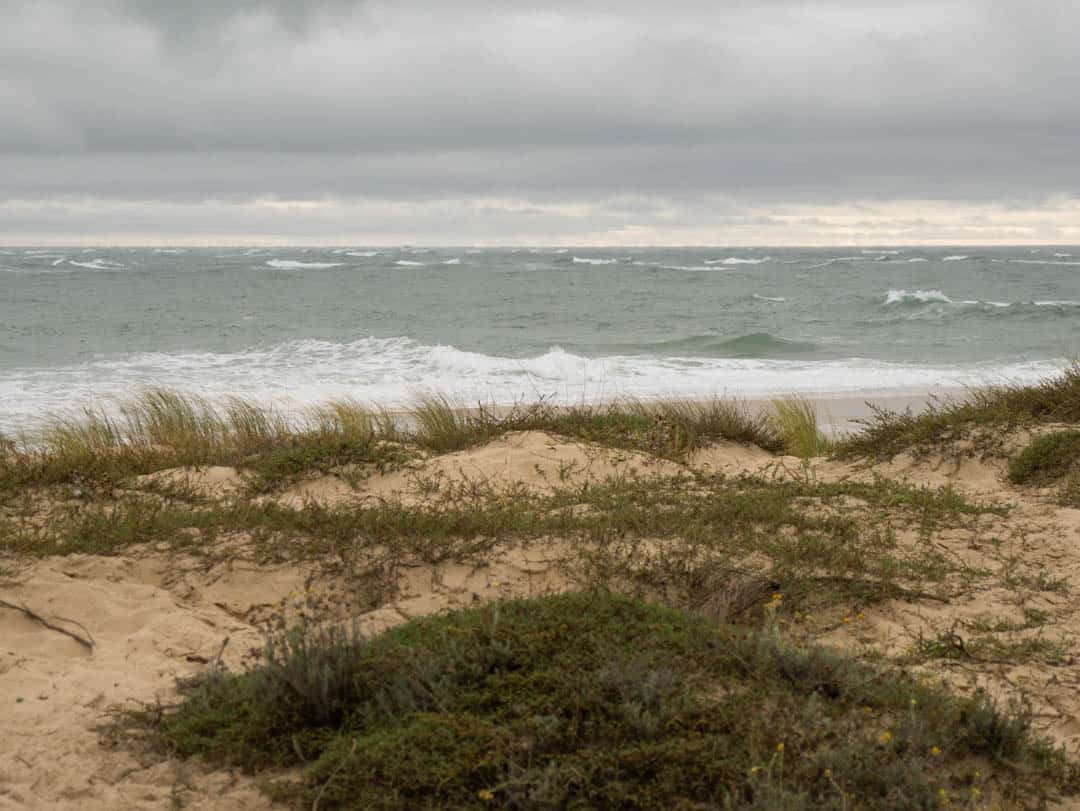 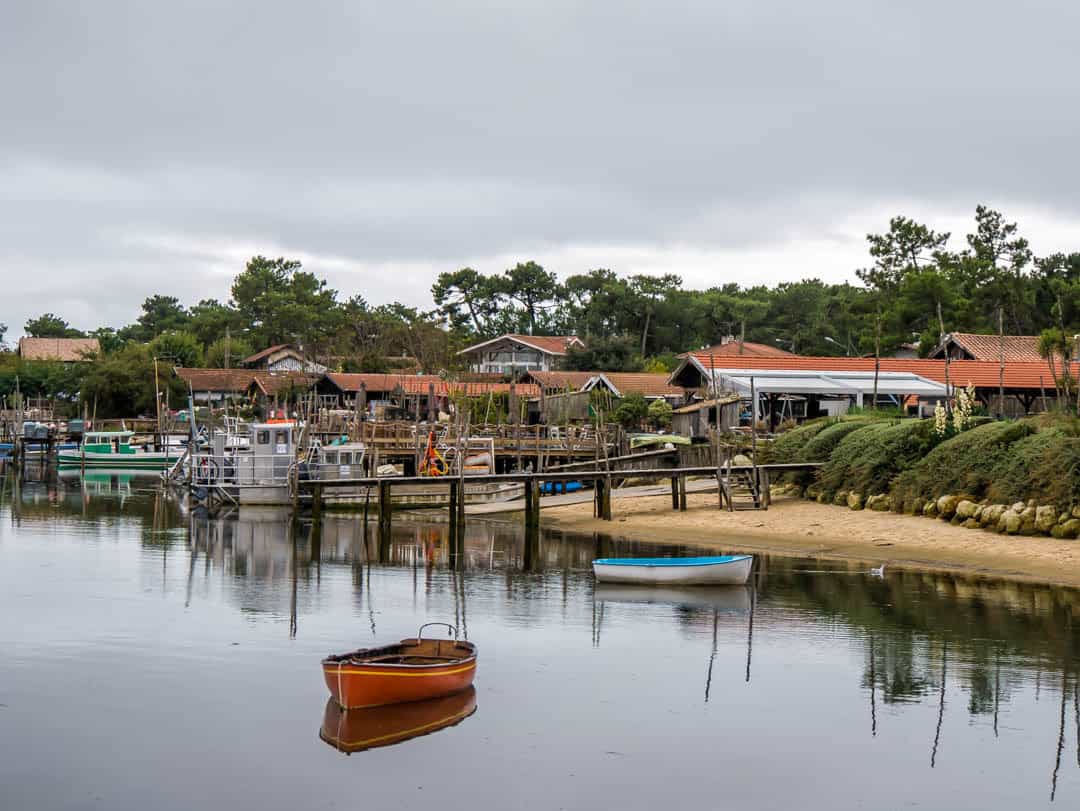 The area is often generally called Cap Ferret.  To be accurate, Cap Ferret is a town on the Cap Ferret Peninsula, in the south-west of France.  There are other towns like Cap Ferret also located here.  Cap Ferret can be reached by road from the north, with good roads connecting it to Bordeaux and other major cities and highways.  It is also accessible by passenger ferry from Arcachon, the city across the bay.  There is also a small train, almost toy-like, that runs between the ferry stop at Belisaire and the beaches further south.

Outside of the main European holiday periods, especially August, when hordes of people throng to these shores, this seaside area turns into a quiet hideaway.   It’s close enough to still beckon those who live in nearby Bordeaux and surrounds, but not enough to generate the plague-like proportions of sun worshippers.  Late September, early October is still a perfect time to visit.

There’s a gorgeous little gourmet providores store on the main road in.  It’s worthy of a stop to collect a few local goodies.  I spy Confit d’Oignon, always a delicacy here and some goat cheese that will match with it perfectly.  Many of the streets on the left-hand side of the road lead into cul-de-sacs with water views.  Local residents, happy I’m sure to get their haven back after the summer, glide by on bikes, or stop for a chat in the street. 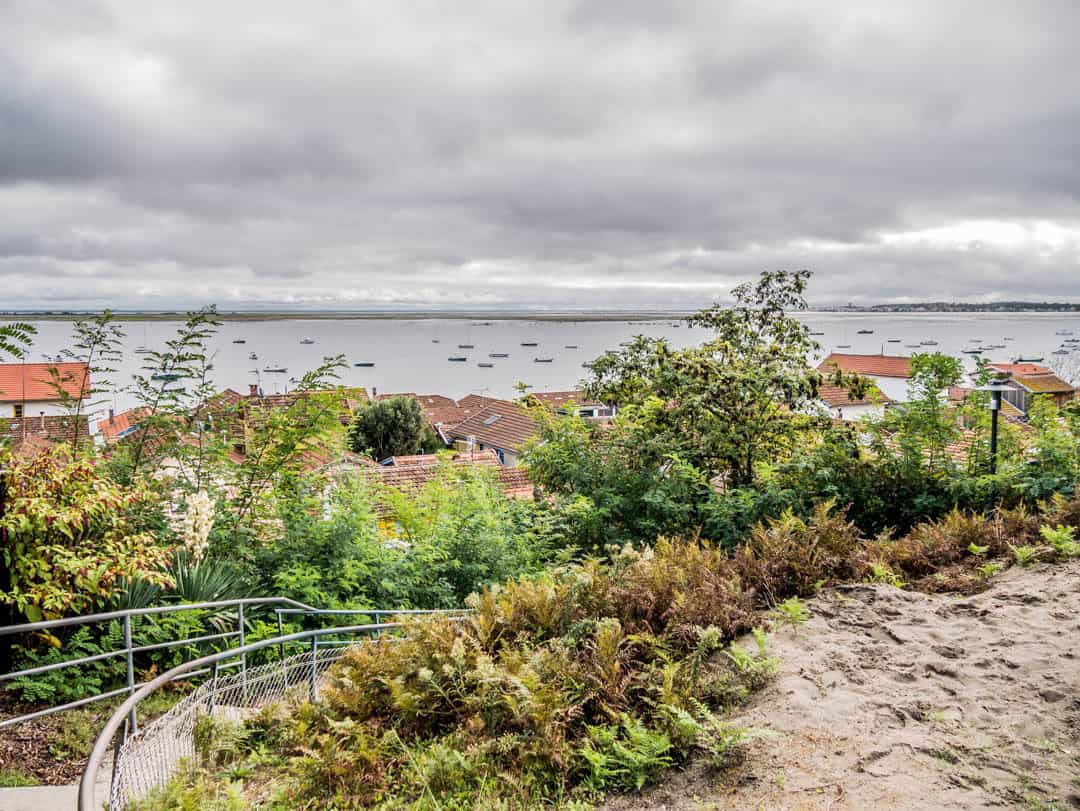 The eastern side of the peninsula is lined with very small enclaves of residences, each protective of their own little part of paradise.  We stop at many of them along the way, sometimes only staying for a quick look, other times, getting out for a walk.  The area is also thick with pine trees, making riding along the many paths a beautiful way to see the area.

Whilst this area might be a secret to many, if you are a lover of oysters, then this area will need no further explanation.  This peninsula is the home of ostréiculture.  No this isn’t about ostriches, it is the French term for oyster farming, with this area providing much of the French supply of these prehistoric looking items.  For those who covet their salty flavour and gruesome texture, this is their destination of choice.  There are plenty of opportunities here to watch those who work in the industry and to eat them, of course. 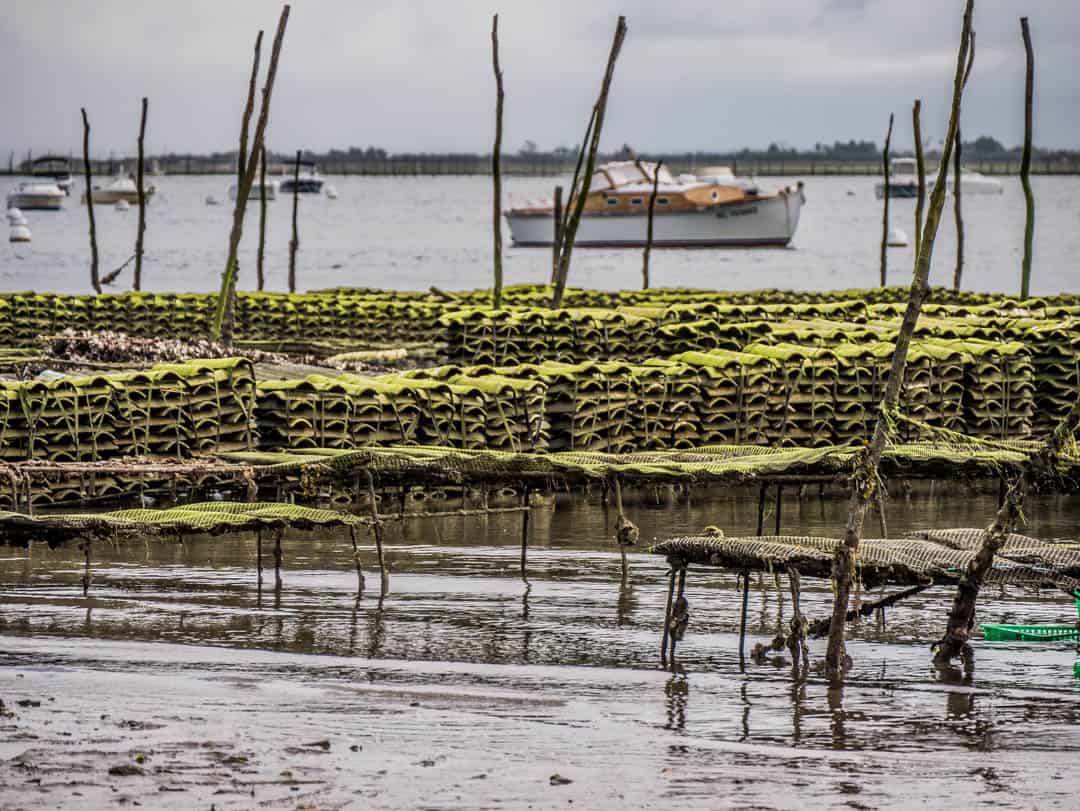 Things to see and do in Cap Ferret

It gives its name to the entire peninsula so it seems only right that we should spend some time hanging out in the village itself.   Located right down the end of the pointy end, it’s known for some excellent restaurants and great water activities.

Visit the Le Phare du Cap Ferrat Lighthouse, located inland on the peninsula, not on the water’s edge like we would expect.  The original lighthouse was over 47 metres but was destroyed by the Germans during World War Two.  Returning as an operational lighthouse in 1947, it is now 52 metres.  It is now open to visitors but to ensure it is open on the days you plan to visit, check their website. 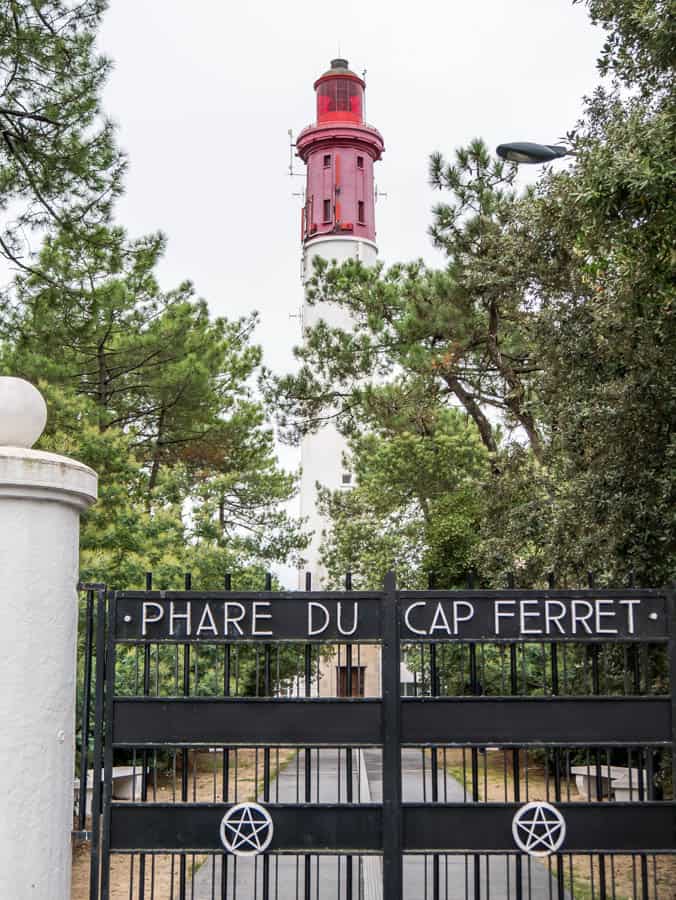 Or Herbies as we liked to call it was my favourite location here.  Whilst there is a local road that connects down to the small village, it’s not somewhere we would get the motorhome into.  There’s not much parking in a lot of areas on the main road here anyway.  There is a parking area near L’Herbe dedicated to motorhomes so we just parked here safely and then rode our bikes into L’Herbes.

The road took us to a location above L’Herbe, offering sea views over the top of terra cotta rooflines.  A quick walk down a track and this cute town is laid out in front of you.  Connected by a series of sandy paths, these weather-beaten timber houses have stood the test of time since the 19th century and served their working owners well.  Brightly coloured, many with small wooden tenders and other fishing paraphernalia strewn about, it’s clear this is still very much a working community. 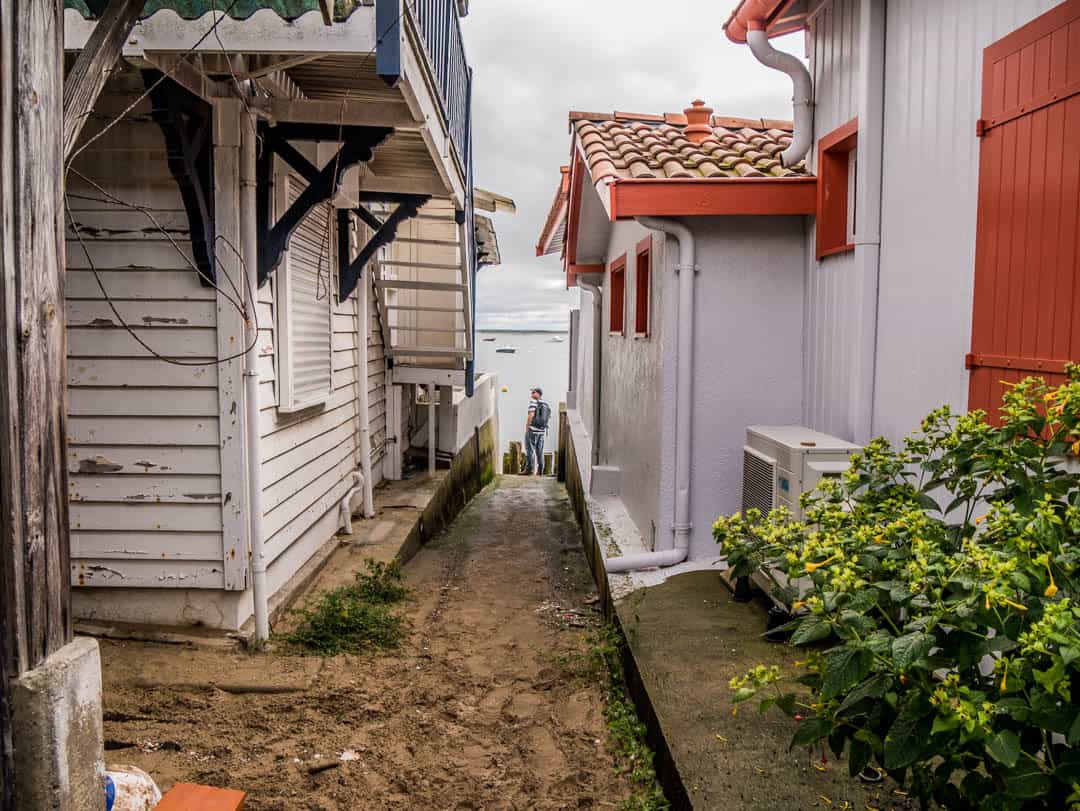 It felt a little voyeuristic, walking along these laneways down to the beach.  More often than not we were walking in their front yards of this small oyster farming community. 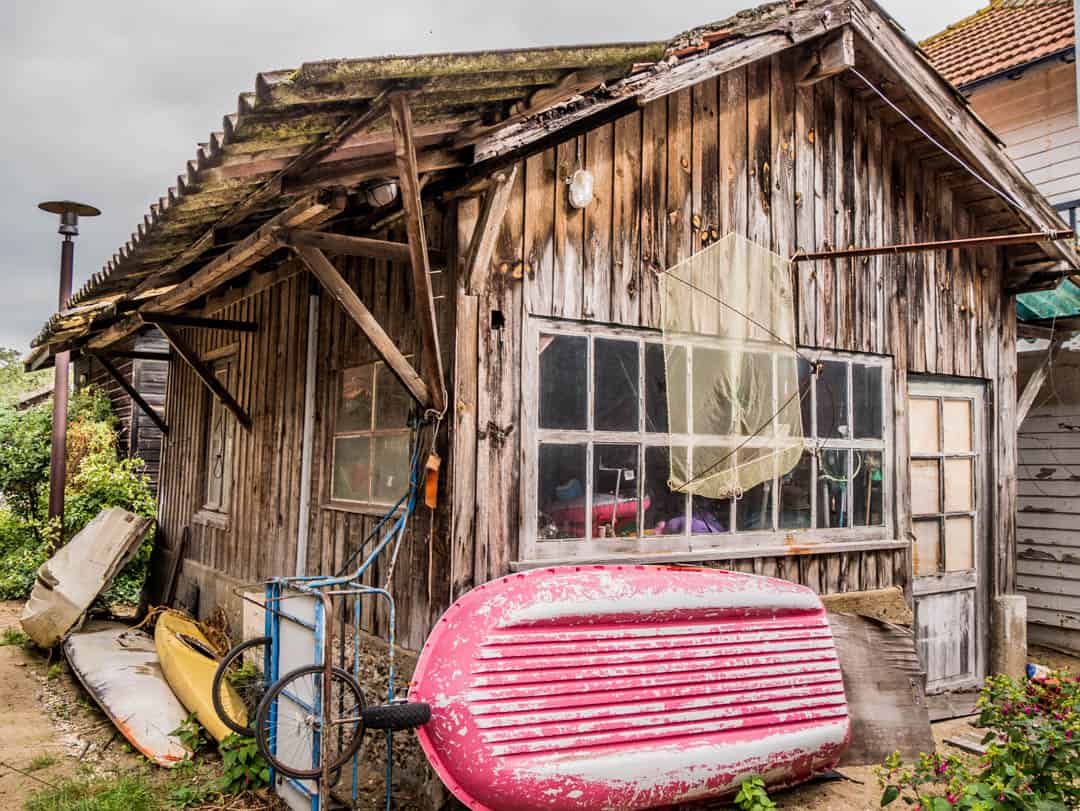 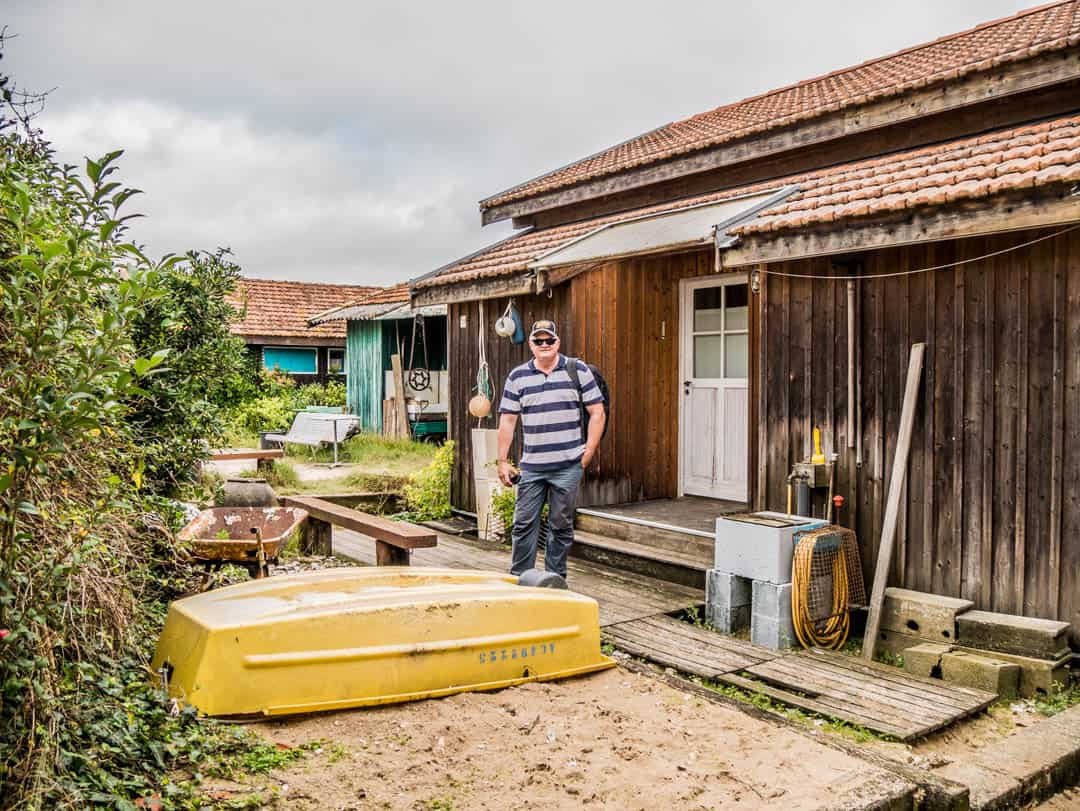 A little more modern looking, with some great outdoor cafes, and a large paved outdoor promenade where you can sit and watch all that is happening on the water.

If you make it down as far as Cap Ferret, extend yourself a little further and get over to the western side of the peninsula.  It’s everything the eastern side isn’t.  Wild, woolly and windy, the Atlantic Ocean serves up some incredible waves here, ripe for surfing if you are ready for an adrenaline rush.  It’s not really the best place to swim on the wild days.  Taking a paddle in the calmer waters on the other side will be more enjoyable and quite simply a whole lot safer.

There are some great walking trails here,  although many of them would be difficult for anyone with mobility issues.  From the parking lot near Plage Mirador, we walked through the sand dunes for about 15 minutes to get to the western beaches.  Mostly it was soft sand, making walking more challenging. 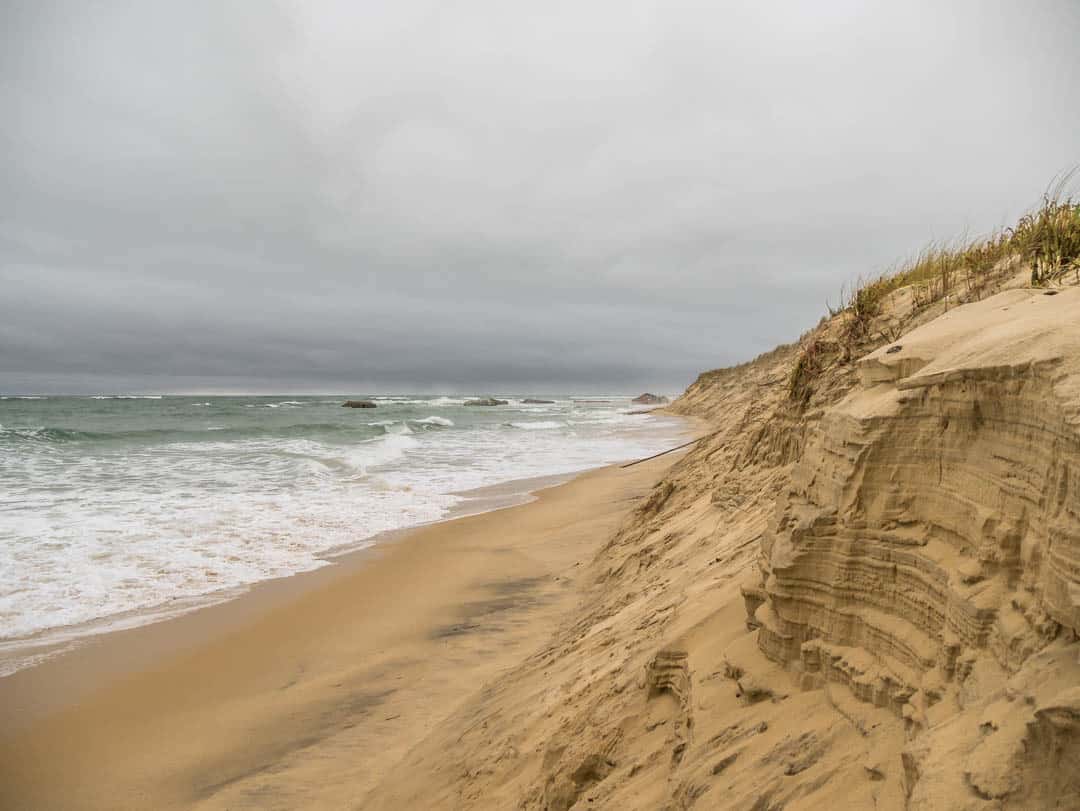 The erosion on the dunes is evidence of the wave action

From here, you can also see across the Dune du Pilat, the largest sand dune in Europe, located across the bay at Arcachon. 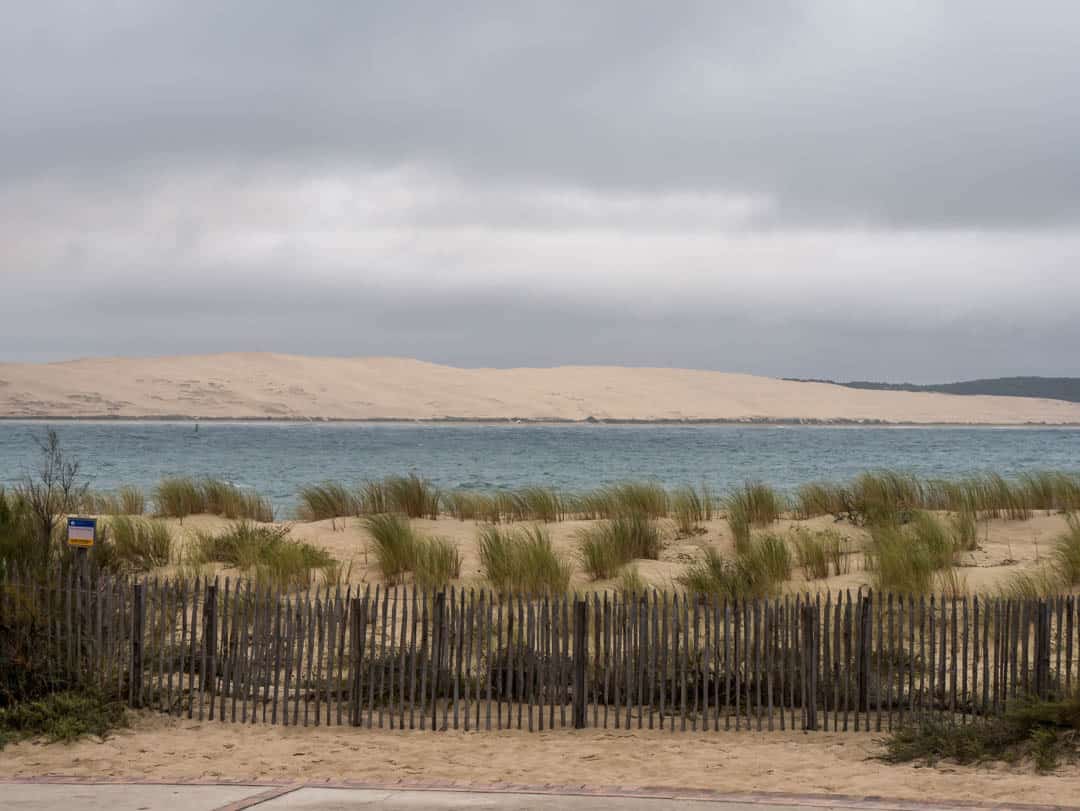 The Dune du Pilat in the background

Where to eat in Cap Ferret

There are some more well-known restaurants in Cap Ferret such as Chez Hortense which has been attracting diners with good food and views.  We went a little more rustic and headed into the oyster shacks.  Both of these were working their oyster trade all around us whilst we visited and ate.  A sure sign that these places are the real deal, and a great source of education and interest for us also. 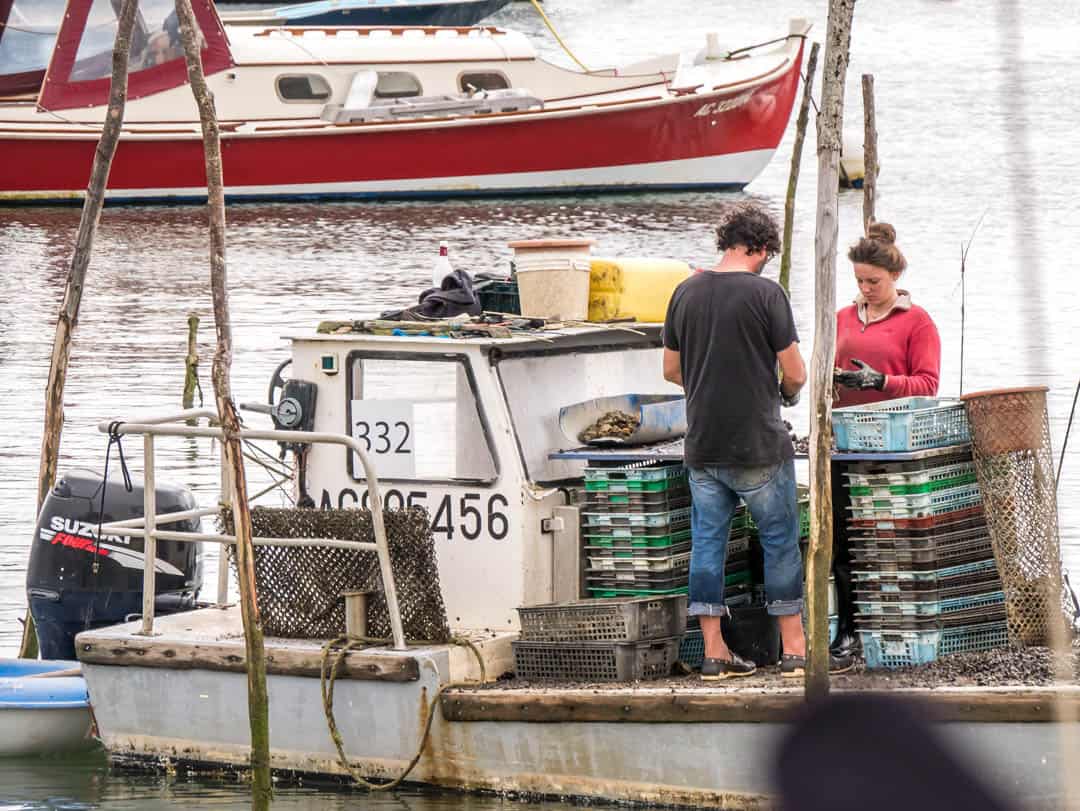 On the beachfront at L’Herbe, you can get a beautiful view and tuck into some of the area’s fresh oysters.  I’m not an oyster fan, so sat this one out albeit with a cold glass of rosé in my hand, and watched Stirling enjoy his selection of huîtres.  It’s a top location to sit and eat, and there is a menu rich in seafood, not just oysters.  They are incredibly cheap here as well, and you know exactly where they are coming from when you see them being brought straight off the boats into the restaurant. 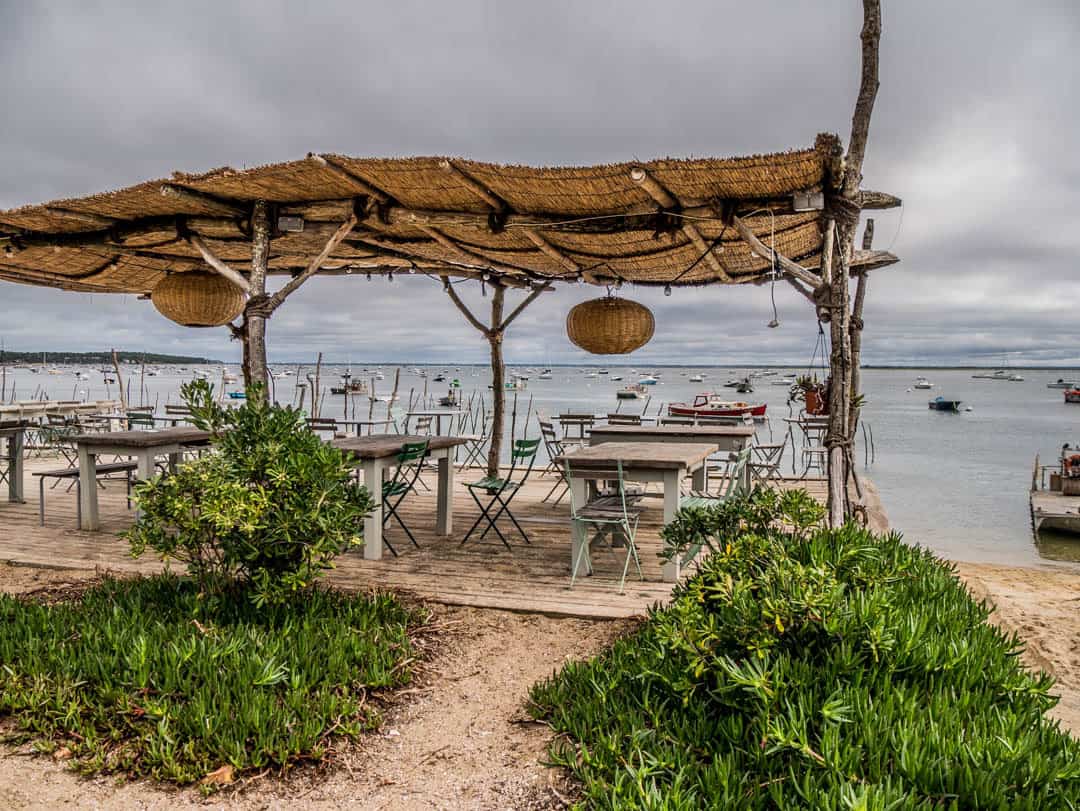 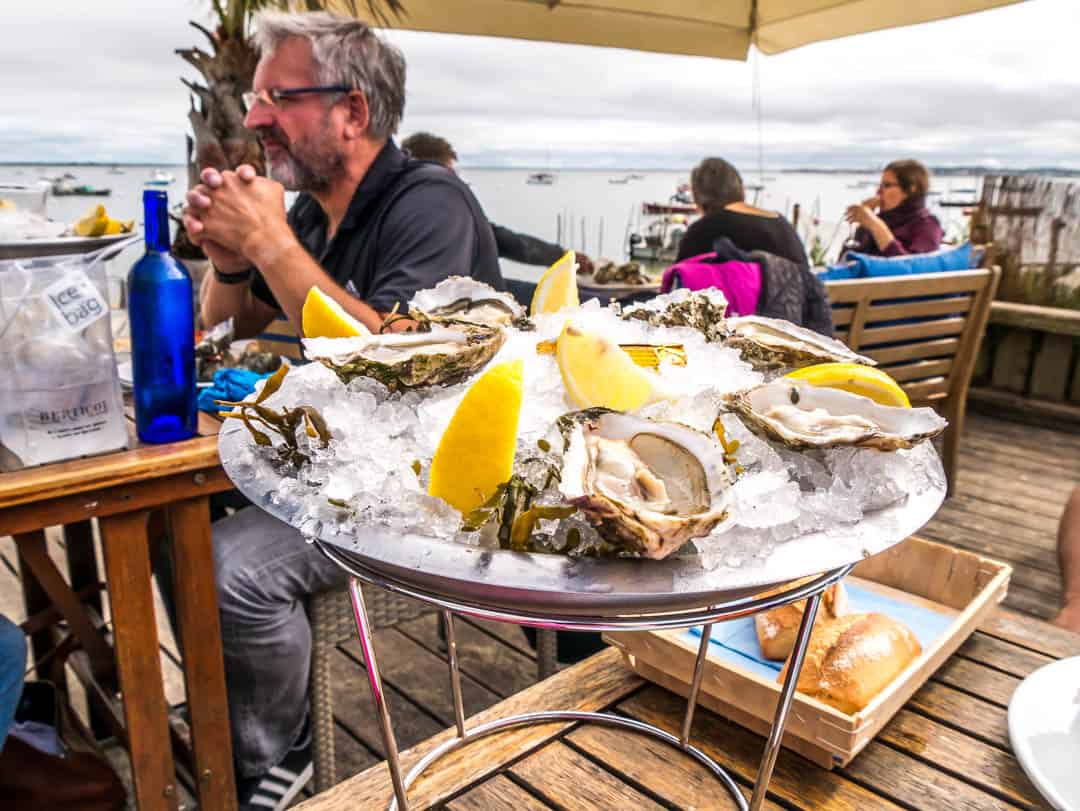 There are several restaurants of note in Cap Ferret.  Seeing, however, that I was never going to choose one based on the oysters, I chose instead on the outlook.  With a bright green wooden building catching my eye first, a quick look inside saw me sold.  The laid-back alfresco dining arrangement, with chairs and umbrellas, was a tick.  The shimmering reflections on the bay was another.  But, it was the long pier, reaching out over the water, where we could sit right on the end that sealed the deal.

Another batch of oysters and some more rosé for me sealed the deal.  Having now eaten his fair share of oysters in one day, Stirling believed he was able to claim that they “were the best oysters he’d ever eaten”.  Given that he is also not a huge fan of them this statement was most telling. 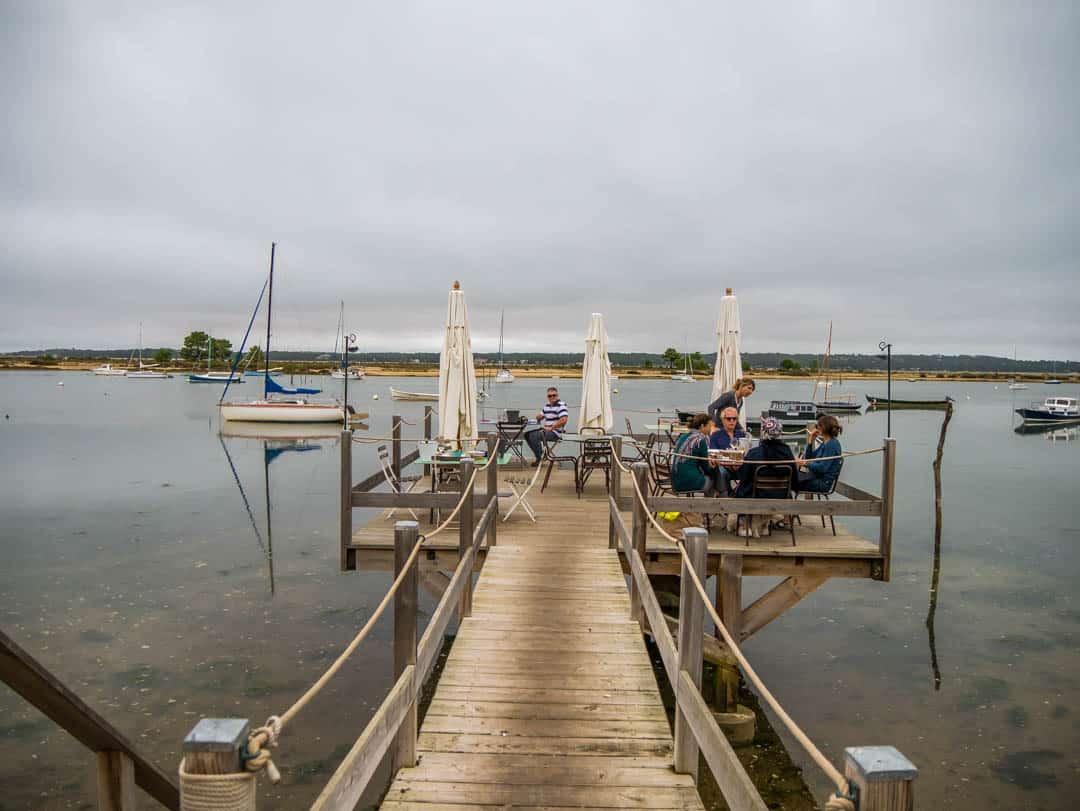 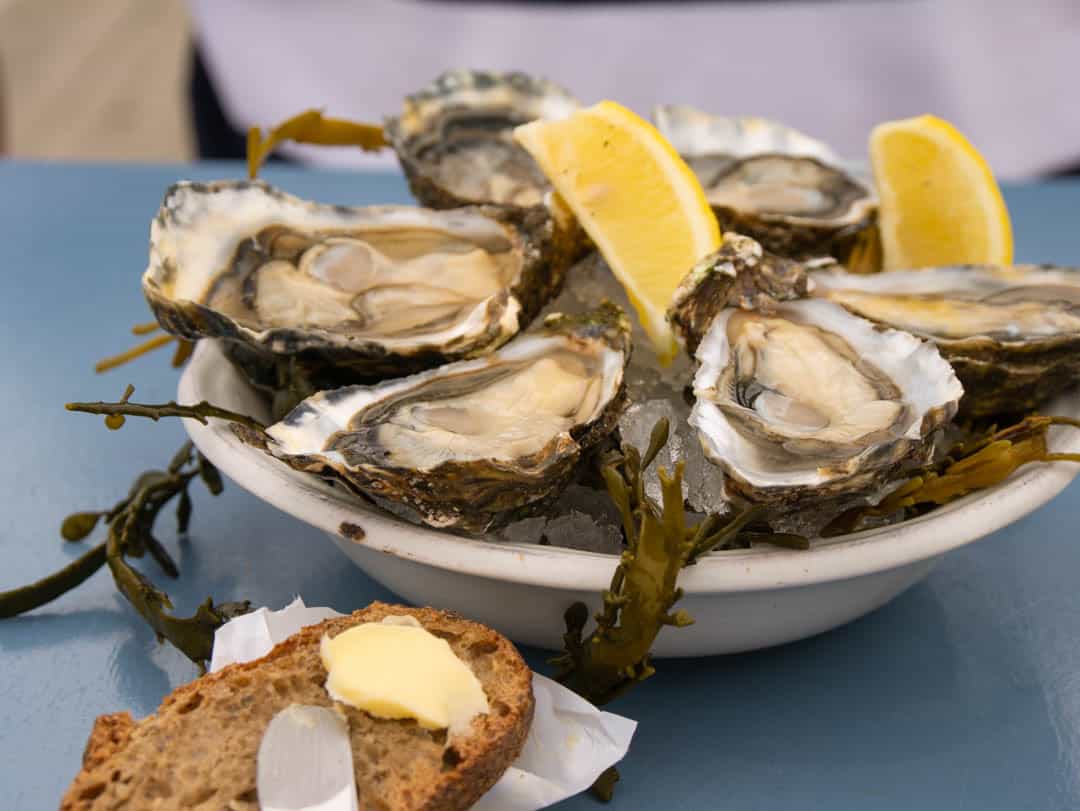 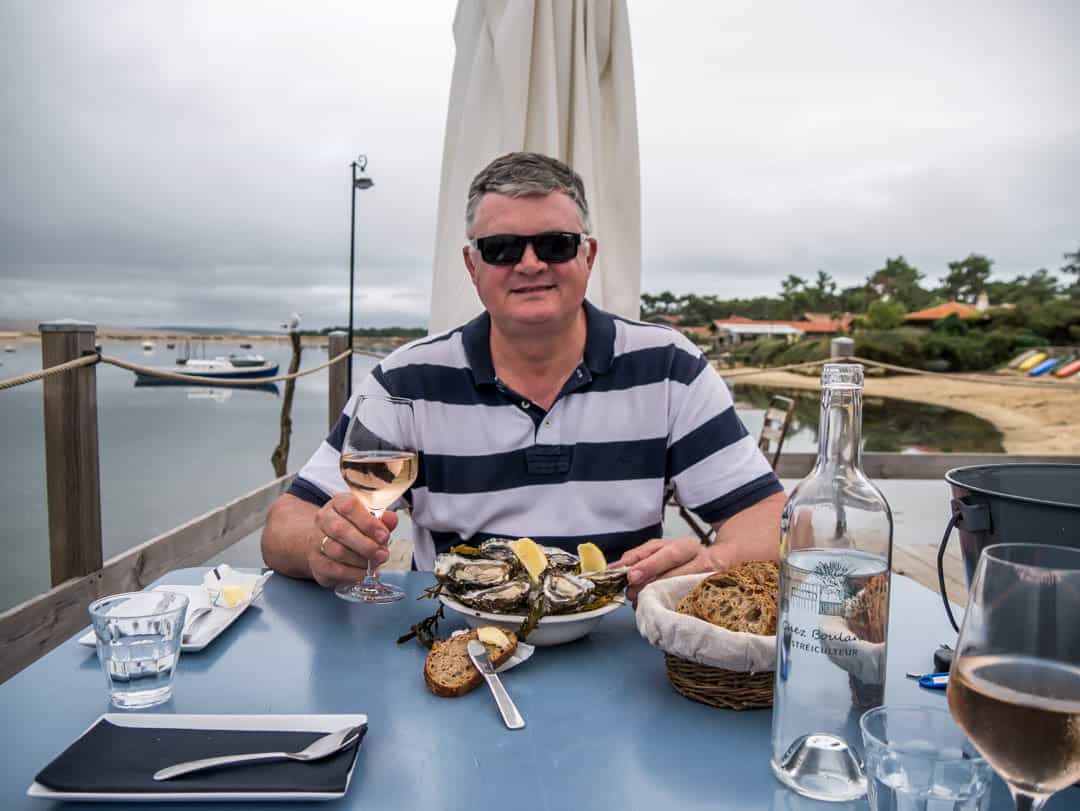 If you are looking to stay somewhere that encompasses everything that is historical about this area, then the La Maison du Bassin is the pick.  This was my only disappointment of our trip down here.  Tucked away on the little side streets of Cap-Ferret, elegantly covered in foliage, the two-storey timber hotel was closed when we got here.  Even though Stirling had probably had his fill of food for the day, the restaurant here comes highly recommended, as does the cocktail hour.  Sitting outside on the verandah, with one of their signature Kir’s had my name written all over it.  Never mind there’s always next time. 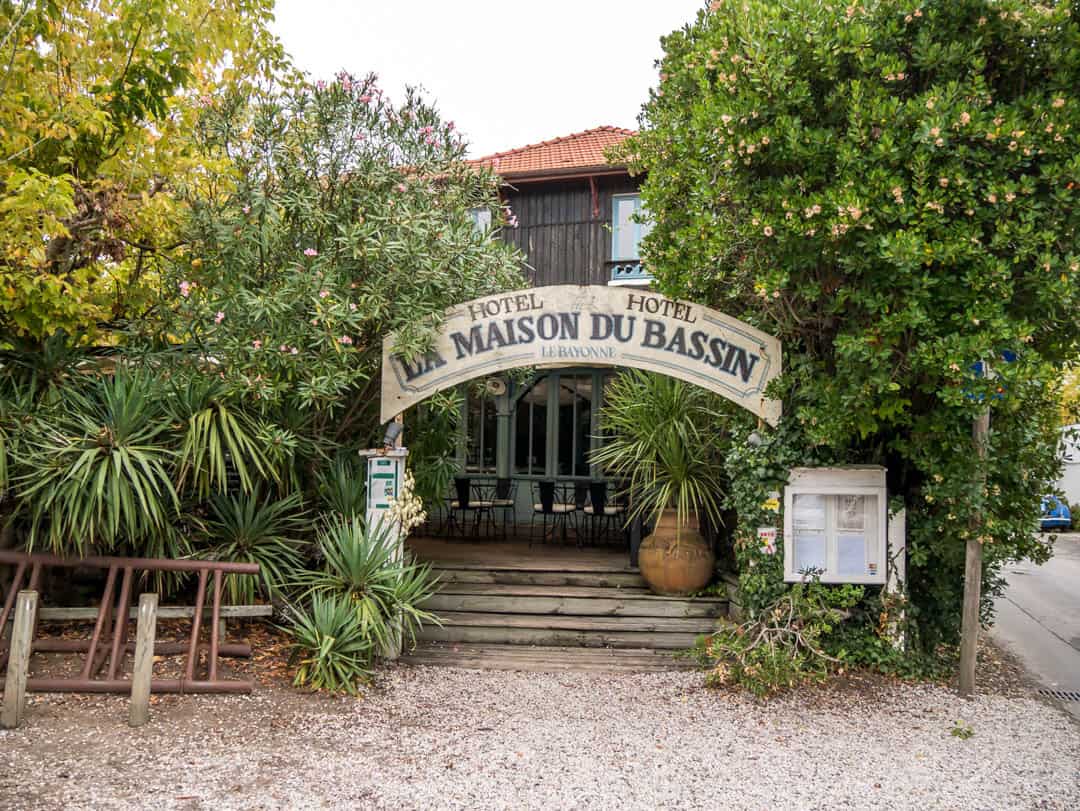 Hotel Cote Sable is another boutique style hotel further down on the southern end of the peninsula and there are many apartments, guest houses and Airbnb here also.

Hotel de la Plage is a stunning building dating back to the 1860s located in L’Herbe.  It’s a great place to stay.

Holiday homes, for extended stays in Cap Ferret, are also very popular, especially for families.  There are many on offer on the peninsula.

The Lege Cap Ferret Peninsula is the perfect place to camp.  For starters, it’s got that relaxed, beachy feel to it.  Who doesn’t love a place that’s comfortable and has access to some amazing places to swim, ride and relax? There are a great selection fo official campsites to stay at.  Just remember, in summer the Lege Cap Ferret area gets quite busy, so I’d recommend booking.

Being in the motorhome, we couldn’t pull up at La Maison du Bassin, but luckily, there are many options for travellers like us.

If an official campsite is what you are after, click here.

If services are not required, consider the parking station near the cemetery at L’Herbe where an overnight stay is permitted.

We stayed at a municipal aires de service, near the entrance to the peninsula, near the Claouey parking area.  There is also an official campsite, Les Pastourelles, next door.  This aire also kindly allows for the emptying and refill of water.  In peak times, it is possible to pay for electricity also.