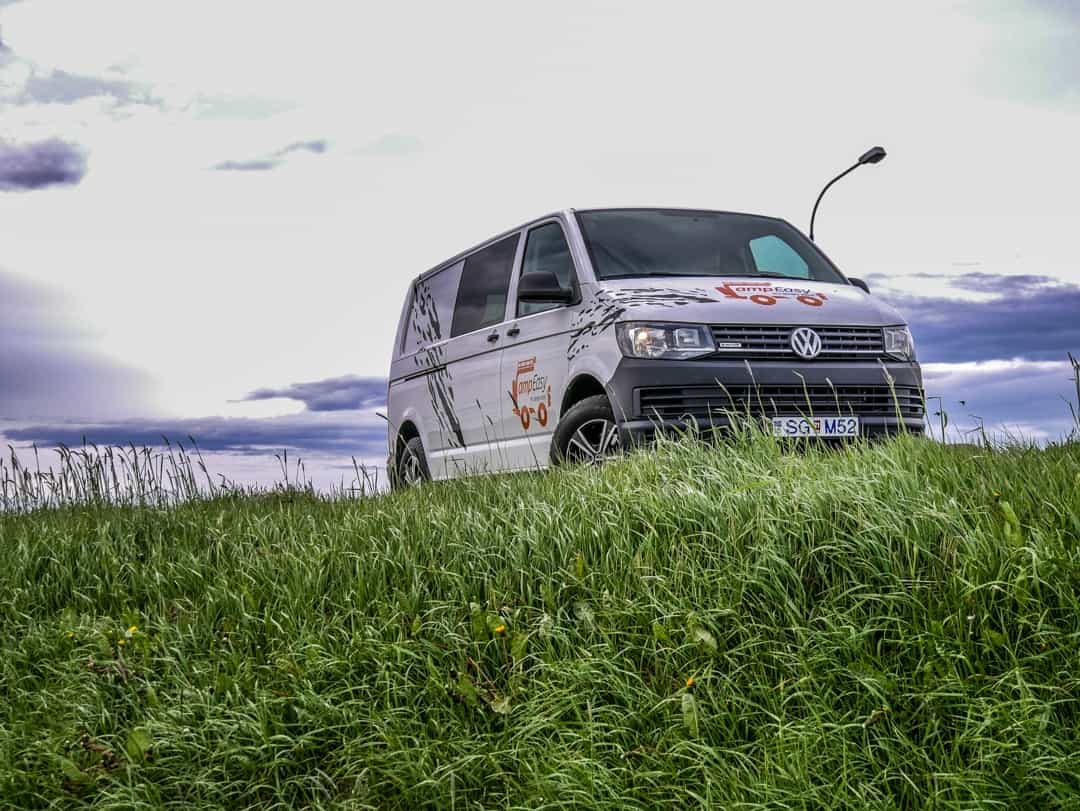 Explore more of the south-west of Iceland

As we hit the road for our final day driving around Iceland on the Ring Road, it felt as though we had been in the campervan for much more than seven days.  That’s the thing I especially love about road trips.  That feeling that time isn’t weighing you down.  With no real plan and no calendar or diary pushing us to be somewhere, the week has drifted along in such a relaxing way.  Even though this is the last full day of driving, we know there will be plenty still to see, and no doubt there will be some surprises along the way.

As hard as it was to tear ourselves away from our beautiful overnight location near the Fossarett Waterfall, we left the fjord area and headed back in the direction of Reykjavik.  We skirted around it, as our area of exploration today was the south-westernmost area of the country.  This is an area that is often neglected by tourists, who come for shorter periods of time with their hearts and minds alight to see all the “big” tourist locations, like the Golden Circle.  They may return, ever so briefly, to take a dip in the Blue Lagoon, but that is all. 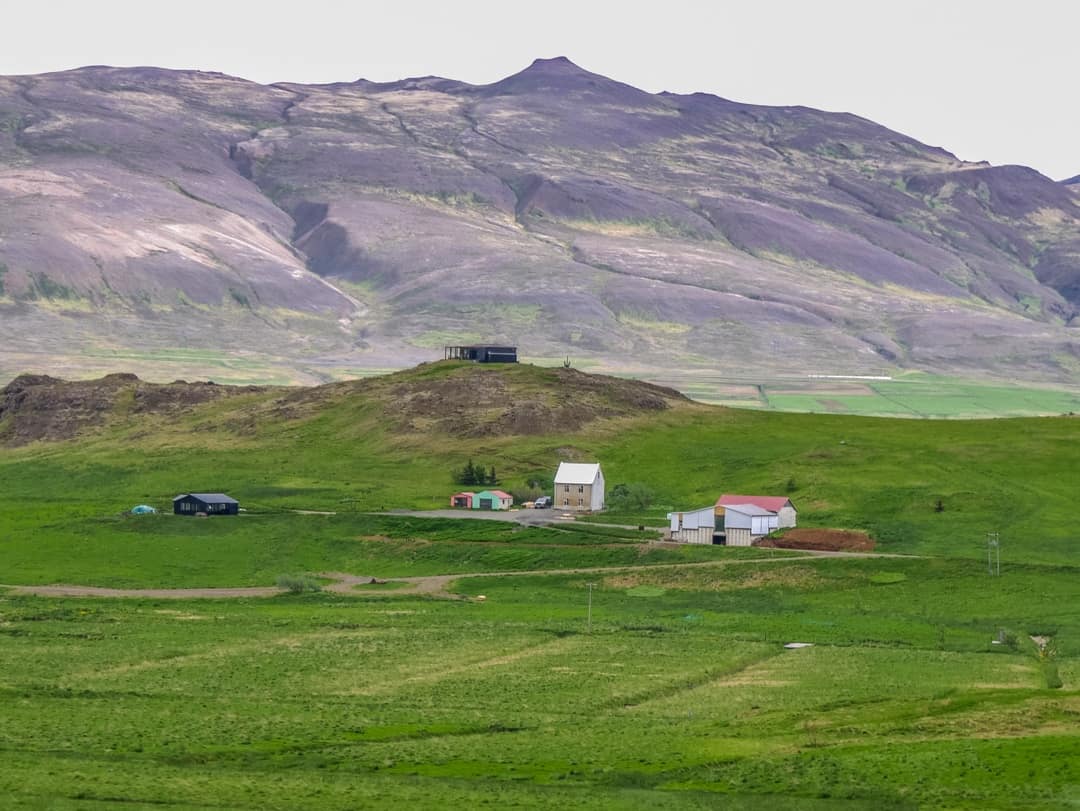 If you fly into Keflavik Airport, it is the landscapes of the Reykjanes Peninsula that will be your introduction to Iceland.  The often desolate looking, barren mounds of volcanic rock, spreading out as far as your eye can see.  It’s not possible to see every location in Iceland, especially if your time is limited, but with its proximity so close to Reykjavik, if you can fit it in, you will be amazed by what you can find down here.

This pretty little town perched out on the south-western coast was once the most populated town on the peninsula, although that still wouldn’t have been much by usual city standards.  Today, it is a town frequented by visitors who love to take moody photographs, featuring the two lighthouses, or to bird watch.

The oldest lighthouse, right out on the point was built in 1897.  The larger one was built in 1944.  There’s a restaurant here with a great outside deck.  It’s perfect for water views if you can withstand the wind and the cold.  Underneath the restaurant is a museum full of all kinds of machinery and other eclectic pieces.

There’s also a large area here set aside as a campsite for motorhomes and caravans. 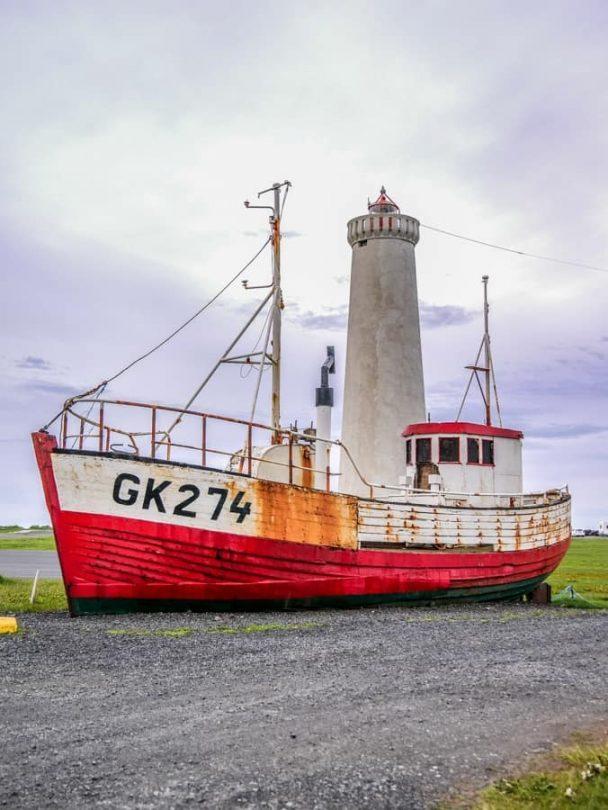 The town is also home to a pretty church called Utskalakirkja and pretty traditional houses.

Sandgerði is a fishing town, located right on the peninsula.  Apart from the usual birdwatching and hiking activities, there’s not much else to do here.  We just loved driving around to look at all the beautiful buildings.  The one below is one of my favourites from the entire trip. 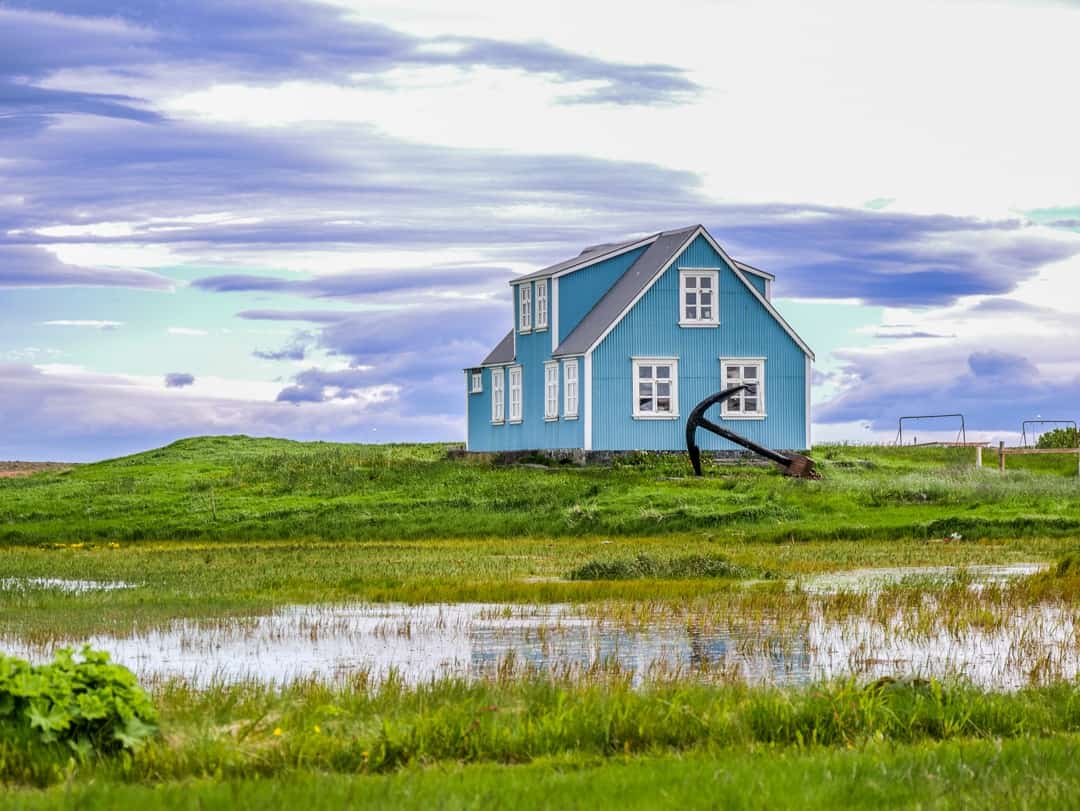 Could this possibly be the cutest church around?  Further along the coast, heading south away from Sandgerði is Hvalsnes.  There’s literally nothing here, save for a couple of houses and this beautiful structure.  Even though this church was formally dedicated to the church in 1887, evidence in the form of gravestones indicates much earlier life (and death) here.

This church has quite a fascinating story.  Back in 1649, the four-year-old daughter of a local priest was buried here.  Somehow the gravestone disappeared and was lost for many years, finally being found once again in 1964.  It had been used as part of the walkway to the church.  Inside the church, the timberwork has been done from that found washed up on the coast.  The outer black rock, sourced from local supplies.

It’s a hard place to describe sometimes unless you’ve been there.  We can drive through town after town and see no-one and sometimes see nothing of any great consequence.  However, there’s an unspoken beauty and even mystery that envelopes this entire country.  I think I’ve mentioned it often enough, but the landscapes just keep changing, keeping us interested and motivated to keep driving.

There can quite literally be nothing but desolation in front of you and then a tiny house, in the middle of a lush green paddock pops up at the strangest of moments. 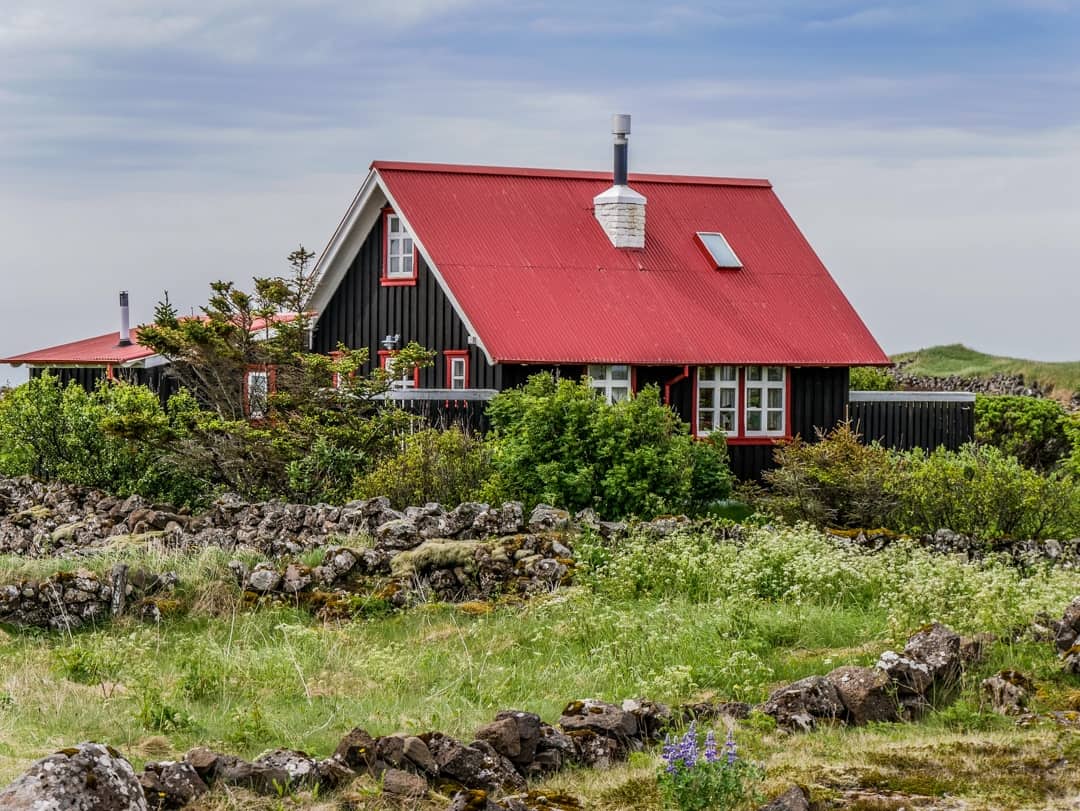 This was the most surreal place of all, and that’s saying something in this country.  About an hour south of Reykjavik, but just a little further on from where we have been driving is the Midlina, a bridge that will take you from Europe to North America.  I thought so too until we found ourselves standing in a huge crevice between two tectonic plates.

The Reykjanes Peninsula sits on the North American tectonic plate, on something referred to as the Mid Atlantic Ridge.  The two plates are continually moving apart but only a few centimetres every year.  Still, the footbridge has a span of 15 metres, allowing you to cross the fissure that has developed as a result of this movement.  On one side you’ll see a “Welcome to America” sign and on the other, “Welcome to Europe”.

Heading towards the coastline once again, you’ll notice a lighthouse.  This was the location of the first lighthouse in Iceland, built in 1878, but most of this was damaged in a 1905 earthquake.  This lighthouse was built on the hill in 1907 and was commissioned in 1908.  Whilst only 26 metres high, it sits 69 metres above sea level.

Nearby are the cliffs of Valahnúkamöl an imposing natural structure formed by powerful waves and storms.  It’s so windy when we arrive that I physically couldn’t open the door of the campervan.  This was when all the driving tips that we were told about when we hired the campervan really made sense. 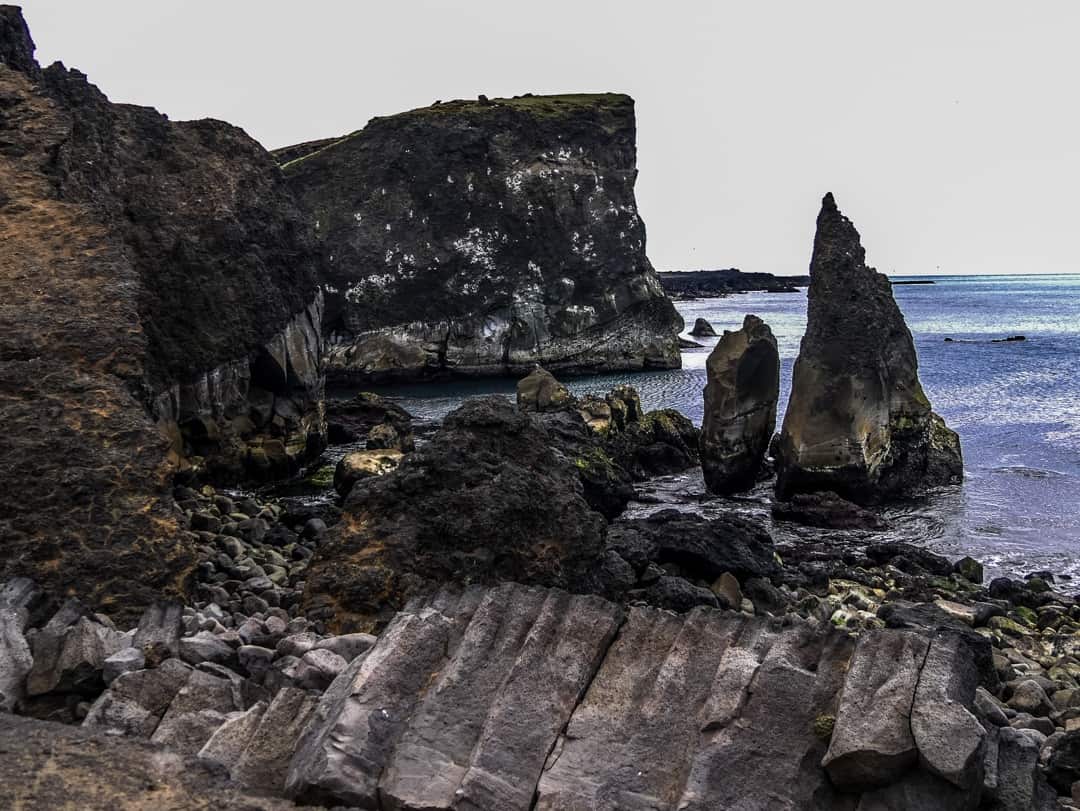 There’s a statue of a gigantic auk here.  I’ll admit to not knowing what an auk was until we came across this bronzed monster.  The auk was an enormous flightless bird, with a natural habitat on the North Atlantic coast.  They were hunted to a point where they became extinct with the last pair being killed just offshore here in 1844. 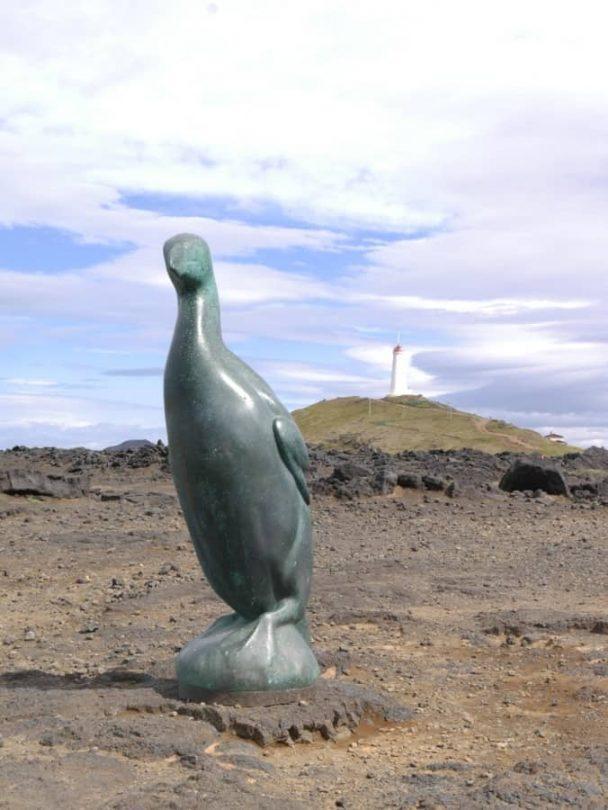 On the opposite side of the main road to the Reykjanes lighthouse rising steam is visible from the road.  We are in a vast geothermal area down here on the Reykjanes Peninsula and you don’t have to go too far to see the power of this natural energy.  These are the Gunnuhver Hot Springs

As we head into the park, the signage couldn’t be more obvious.  This is a place you don’t want to venture outside of designated walking areas. 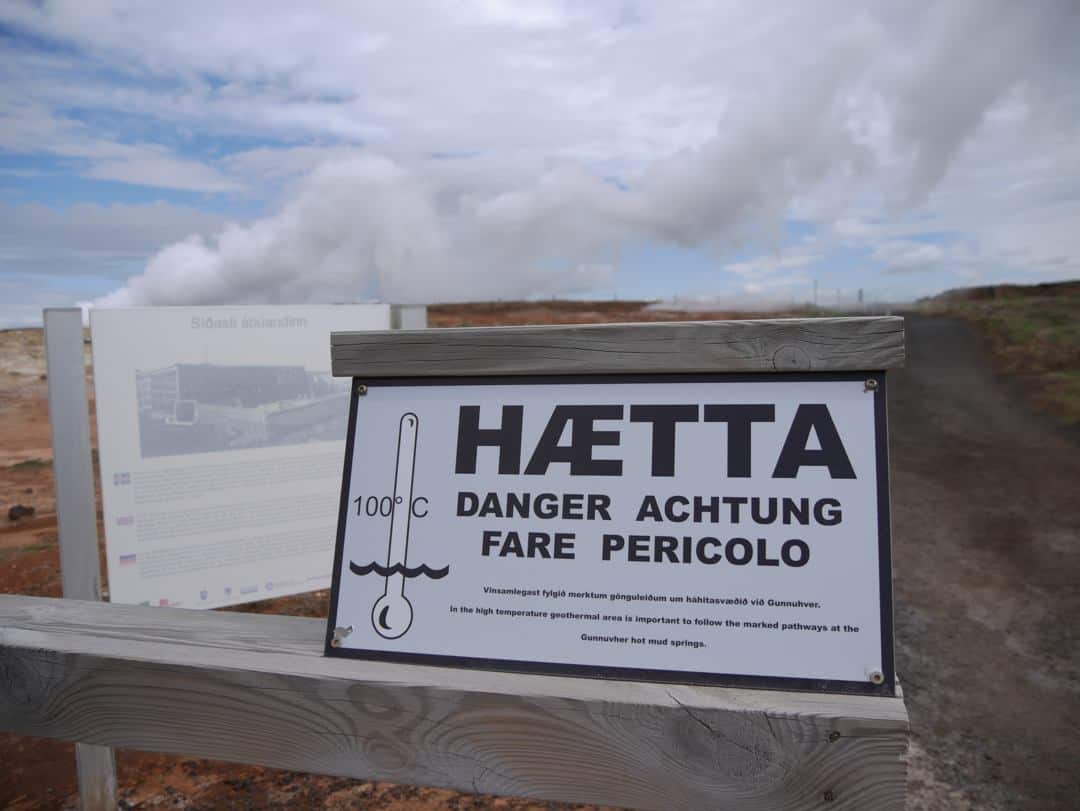 There are two timber walkways here, where you can view the hot springs and the area in general from a point upon a hill.  There’s no doubt this area is alive.  The steam is hissing out of fumeroles built up off the ground.  Boiling mud gurgles pops and bursts from its hot pool.  Get close enough and you can feel the steam on your face.

Today, the wind is blowing, so the steam is totally covering the walkway.  It’s not a soft mist by any stretch of the imagination.  It’s pretty fierce and it’s actually quite hot! Of course, it also stinks here.  Like any place that has such strong thermal activity, the smell of sulphur is omnipresent.

Getting to the South-West of Iceland

Whilst there are many tours that go from Reykjavik into the south, very few will come out to these areas.  It is therefore recommended to hire a car unless, like us, you are road tripping in a campervan.  This area can easily be accessed on a day trip from Reykjavik.