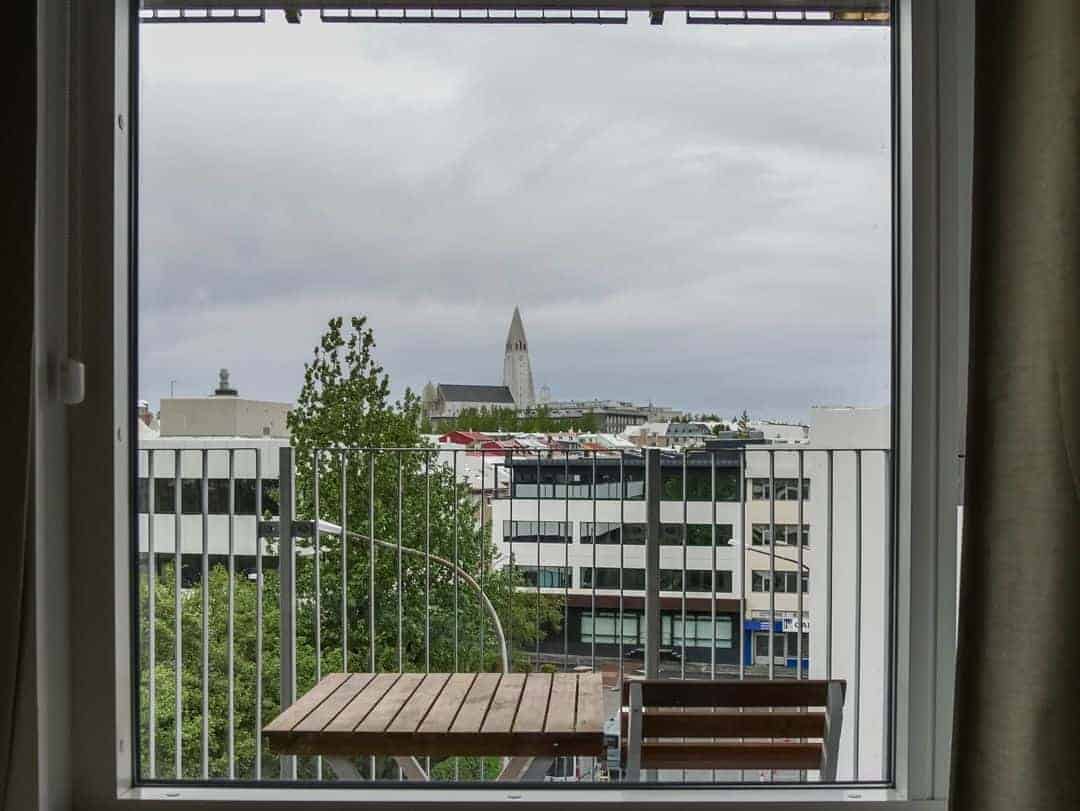 I’ll admit to not knowing much about Reykjavik (pronounced Rake-a-vik) before we decided to visit Iceland.  I remembered the name because it was associated with the massive airport delays following the eruption of that volcano starting with “E” a few years ago.  Now, I’m proud to say that I know the capital of Iceland a little better and if nothing else, I’ve learned to say its name properly.  I can’t say the same for Eyjafjallajökull (the aforementioned volcano), nor most of the other parts of Iceland!

We arrived into Keflavik Airport on a midnight special out of London Heathrow.  As the plane began its descent, I got my first insight into this country where the sun would barely set over the coming months.  Without the bright lights of the city to mask the experience, I could clearly see the city and its landscapes beneath me.  The brightness only masked slightly by the cloudy skies, it felt as though we were arriving in the middle of the day, not at the end of it.

The second thing that caught my attention was a huge billboard within the airport noting that Iceland was the third windiest country in the world, but the first two aren’t inhabited!  In the days to come, when we were out in our camper van, we were to learn first hand just how windy it could be.

Our exit out of Keflavik Airport was not as smooth as it could have been as our luggage had disappeared.  Forecasting some miserable moments over the next ten days without all of our warm clothing and shoes, I searched every carousel possible looking for our luggage.  Eventually, having commenced the official lost luggage process, the bags miraculously appeared an hour or so later.  No time for recriminations, we had a bus to catch to the city so that we could get to our apartment and get some sleep!

Finding good value apartments in Iceland is not an easy process.

By Icelandic standards, this apartment was huge and you could quite easily fit a family in here.  With a separate bedroom, sofa bed and lounge, there’s plenty of room for at least four people.  With 65 square metres of space, there’s enough room for everyone to spread out and have their own space.

Our bedroom came with a very comfortable queen size bed.  Mind you, by 3am any bed looks alluring!  Thankfully the room has thick block out curtains as night time at this time of year doesn’t offer the cover of darkness that many of us are accustomed to. Soft, memory foam pillows are provided as well as warm coverings.  The apartment is fully air-conditioned, has ceiling fans and has additional central heating for the colder months. 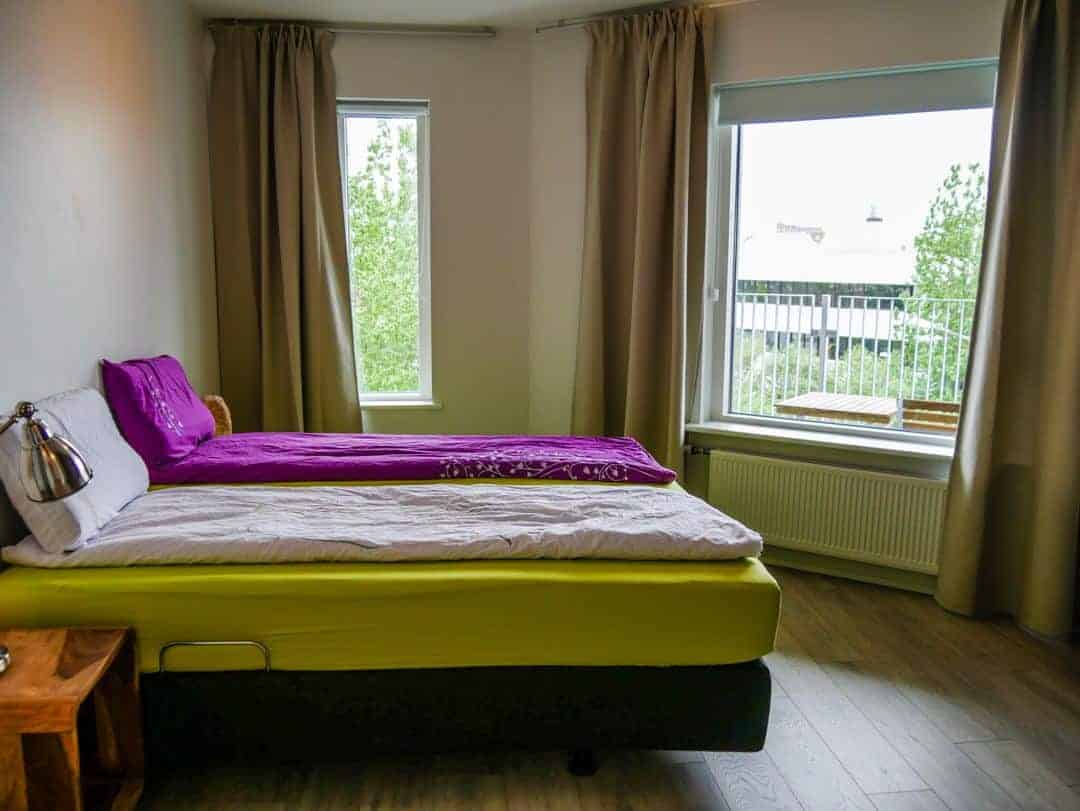 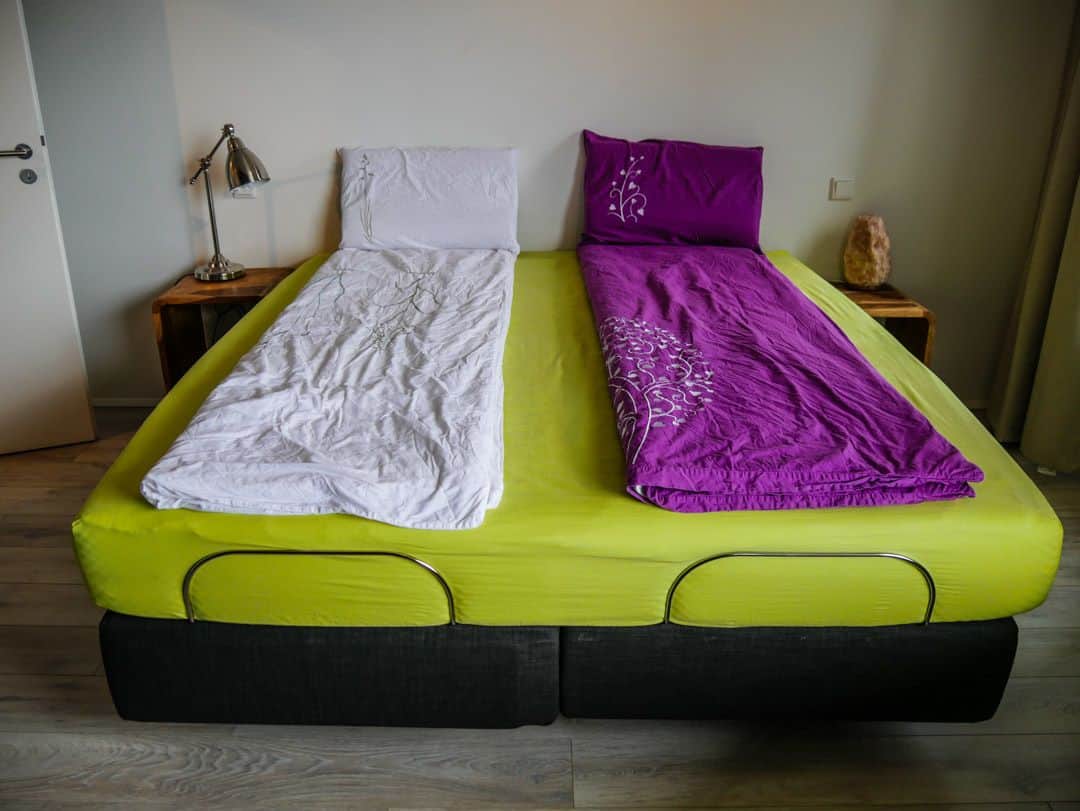 There is extensive wardrobe space here with an entire wall of built-in cupboards. The cupboards have an Ikea feel about them with modular shelving and hanging space inside. This was possibly the best wardrobes I have ever seen in any of the apartments and hotels I have stayed in. In a nod to the cold weather experienced here, there is also additional blankets and bedding for the sofa bed. 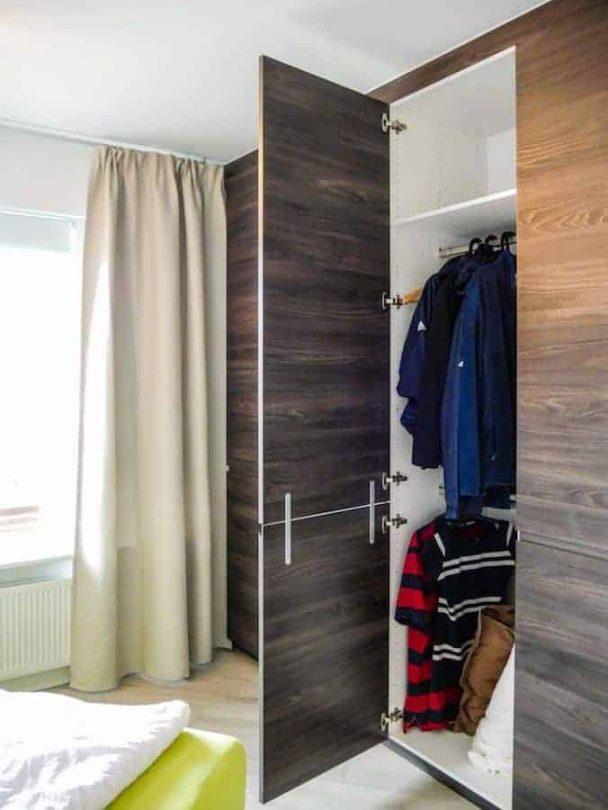 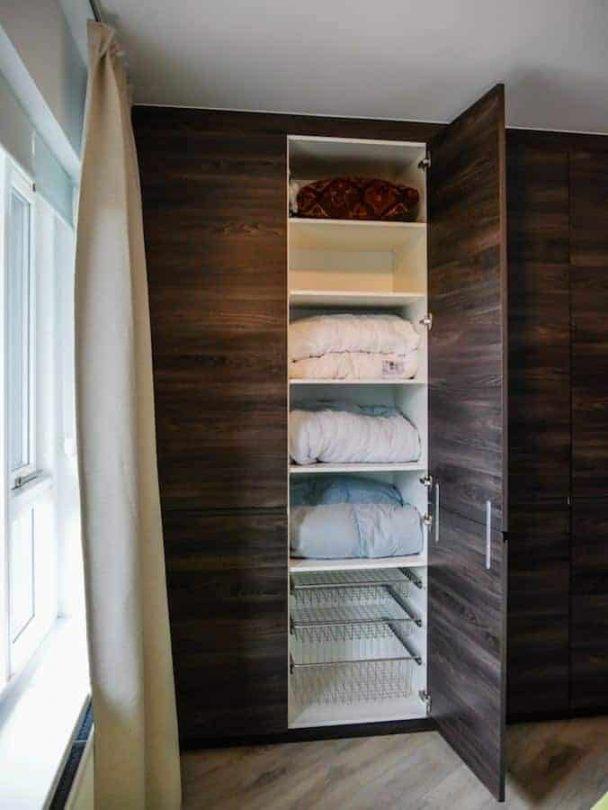 Iceland, and Reykjavik especially, is expensive.  If you are travelling with family or are staying for at least a few days, I would highly recommend renting a self-contained apartment.  The kitchen in this apartment was excellent. It would be easy to feel right at home here with this fully functional kitchen, including microwave, oven, cooktop, huge fridge and dishwasher.  A toaster, coffee machine, and electric jug are also included. 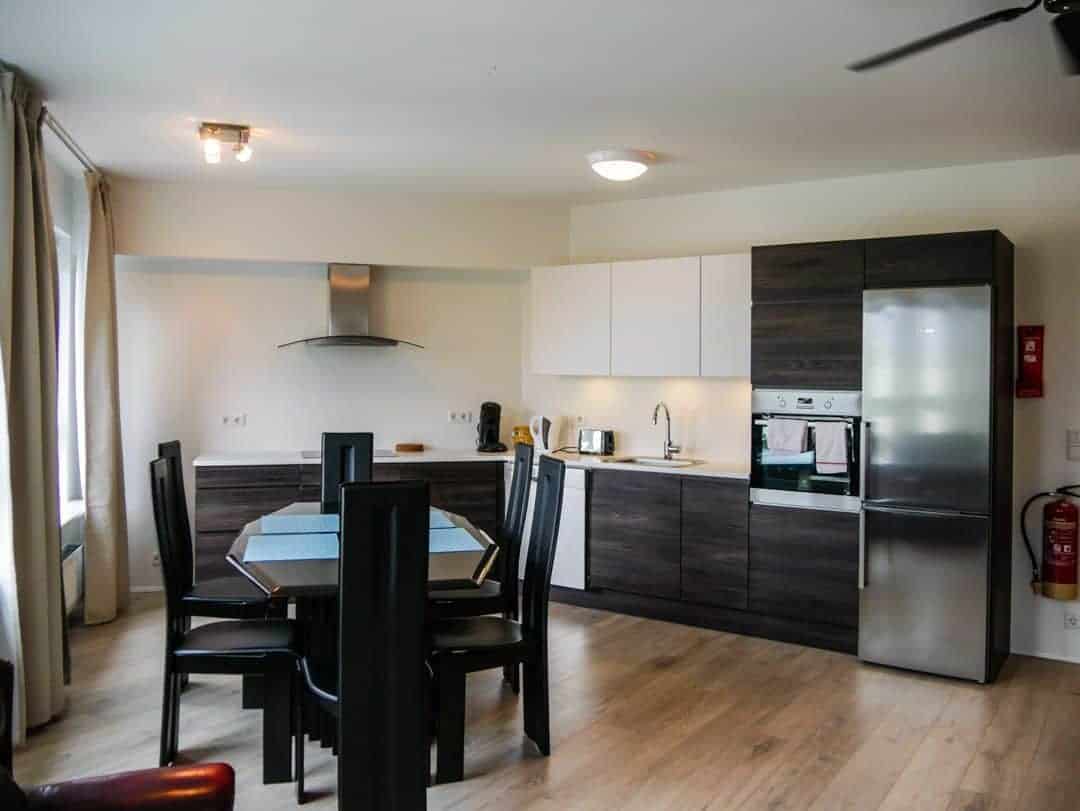 I don’t think any kitchen would come close to the number of appliances and utensils that I have in mine, but this one was very well stocked.  Generous quantities of crockery, cutlery, glassware, pots, and pans could be found in the cupboards.  Everything was clean and in good condition.

Some of the drawers resemble a mini pantry, as previous guests leave behind any non-perishable items they no longer require.  It’s a great process for preventing food wastage and it wouldn’t be the last time I would witness this practice in Iceland. 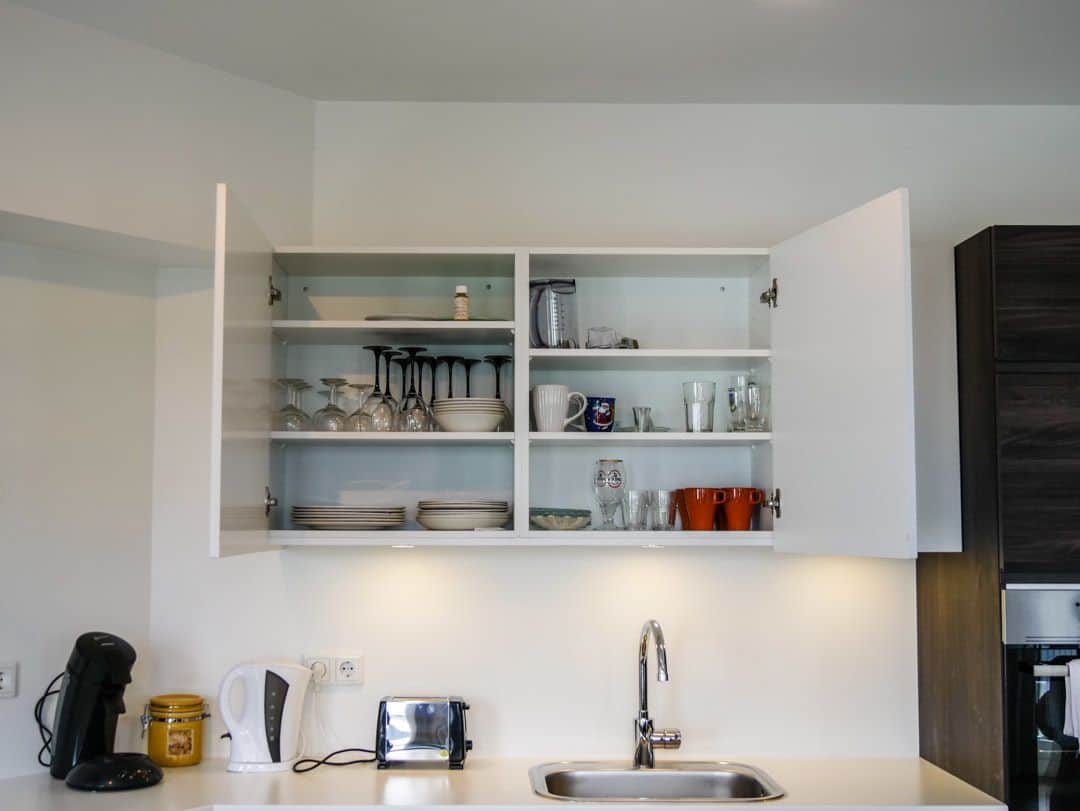 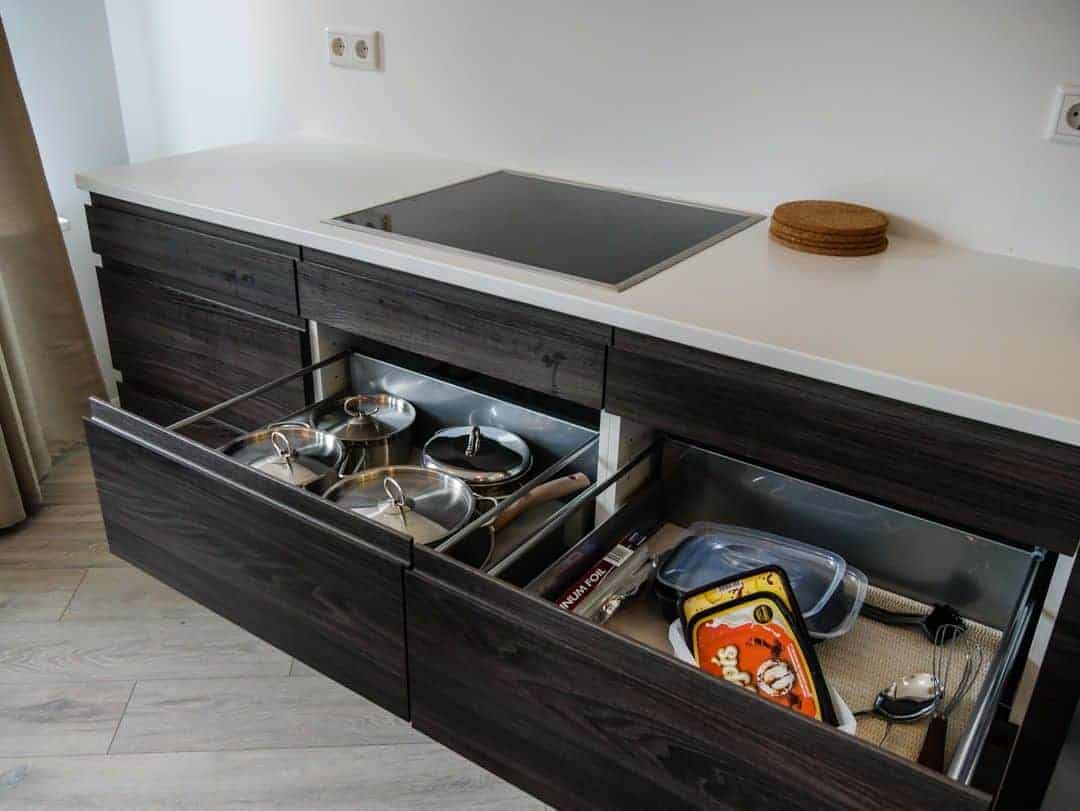 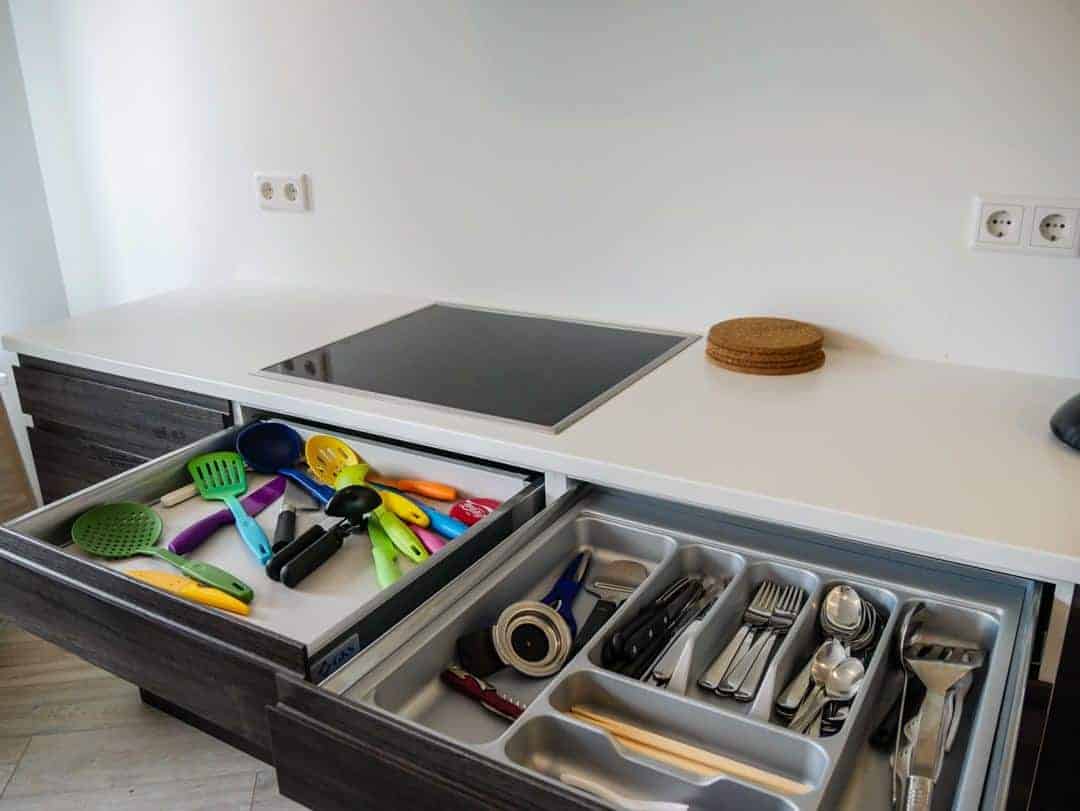 Clean, spacious and with all the things I love – hot water with plenty of pressure, a good mirror and great lighting.  The attention to detail was evident once more in the bathroom with additions such as cotton balls, body lotion, shampoo and shower gel.  Not the itty bitty hotel shampoos either, but large generous bottles. 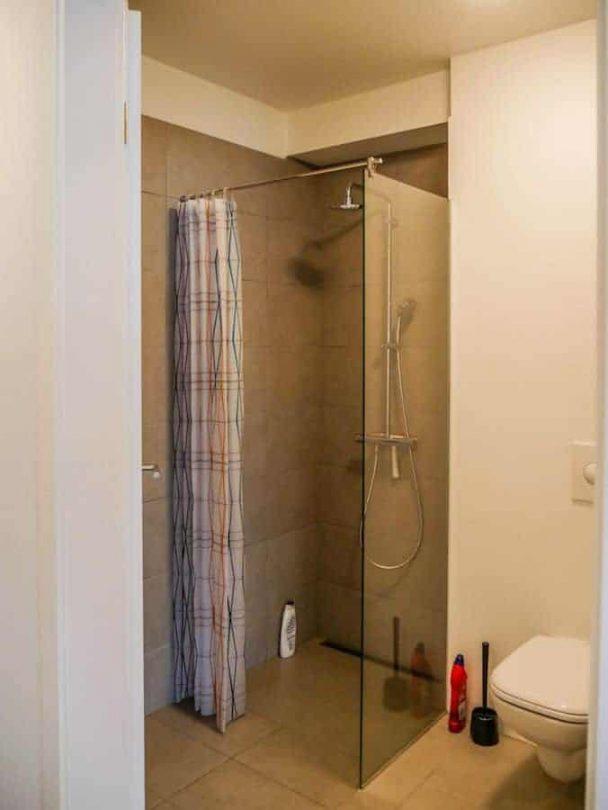 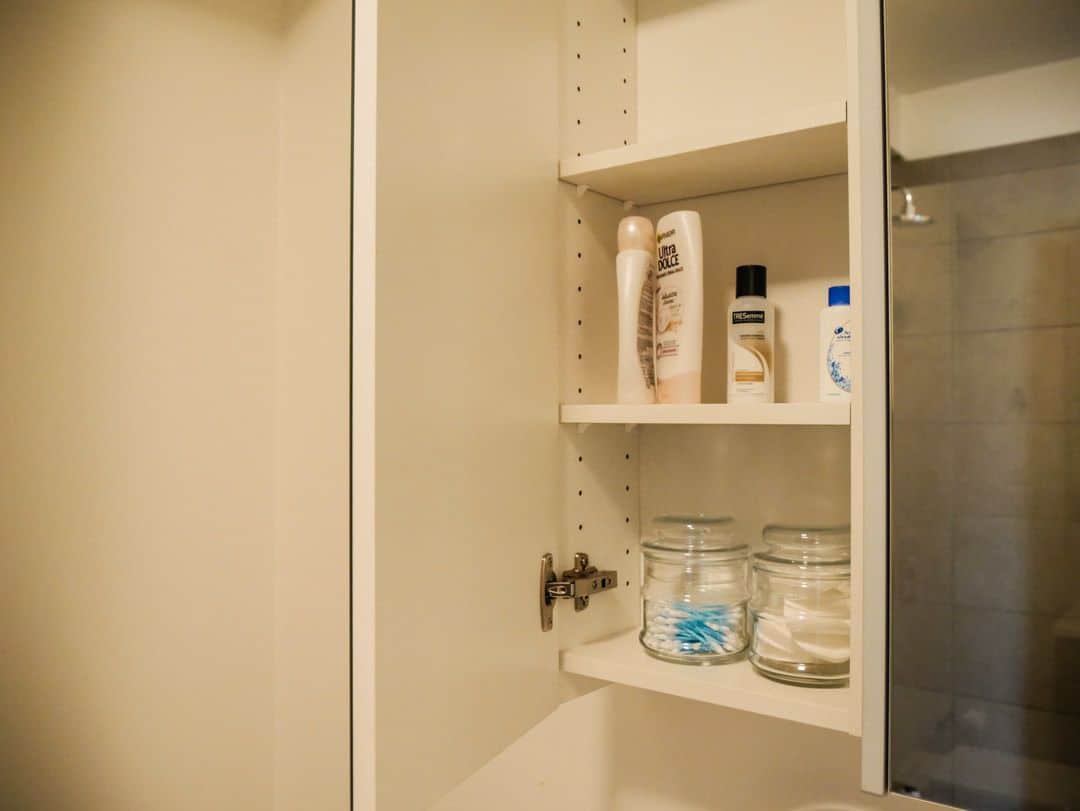 A washing machine and dryer are located in a separate laundry opposite the bathroom.  Instructions in English for the operation of these were found on the wall.  A nice inclusion since most times I try to use machines in a different language usually means they get washed for three hours!

An ironing board, decent working iron, a mop and broom can also be found.  An extension cord and various adaptors were also provided.  There are hooks for hanging coats, useful I imagine when the weather outside is rainy, although there is also a coat cupboard available near the entry to the apartment. 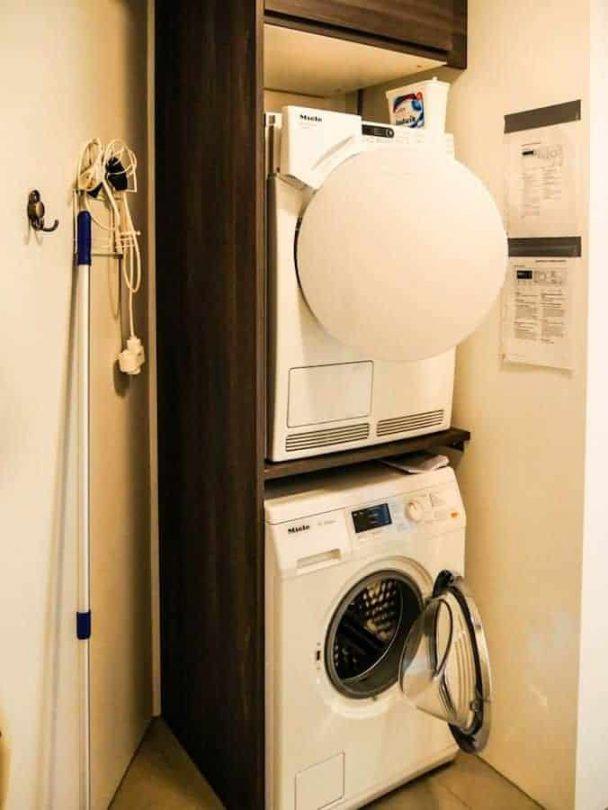 The living area forms a large part of the apartment. With many large windows throughout, the apartment is light and airy.  A large flat screen smart tv, complete with free access to cable tv and Netflix was great.  Being a smart tv, it will also connect to anything you are running off your devices.

The only negative I have about this entire apartment involves the tv and its location.  It’s on the wall at the end of the living area, outside the bedroom.  It can’t be seen from the bedroom and it can’t be seen from the lounges, making it a really bizarre location.   You could move the furniture around but it’s not something that I really think guests should be doing.

Free wifi is provided throughout the apartment. It offers good speed and enough bandwidth to run several devices at once plus streaming to the smart tv. 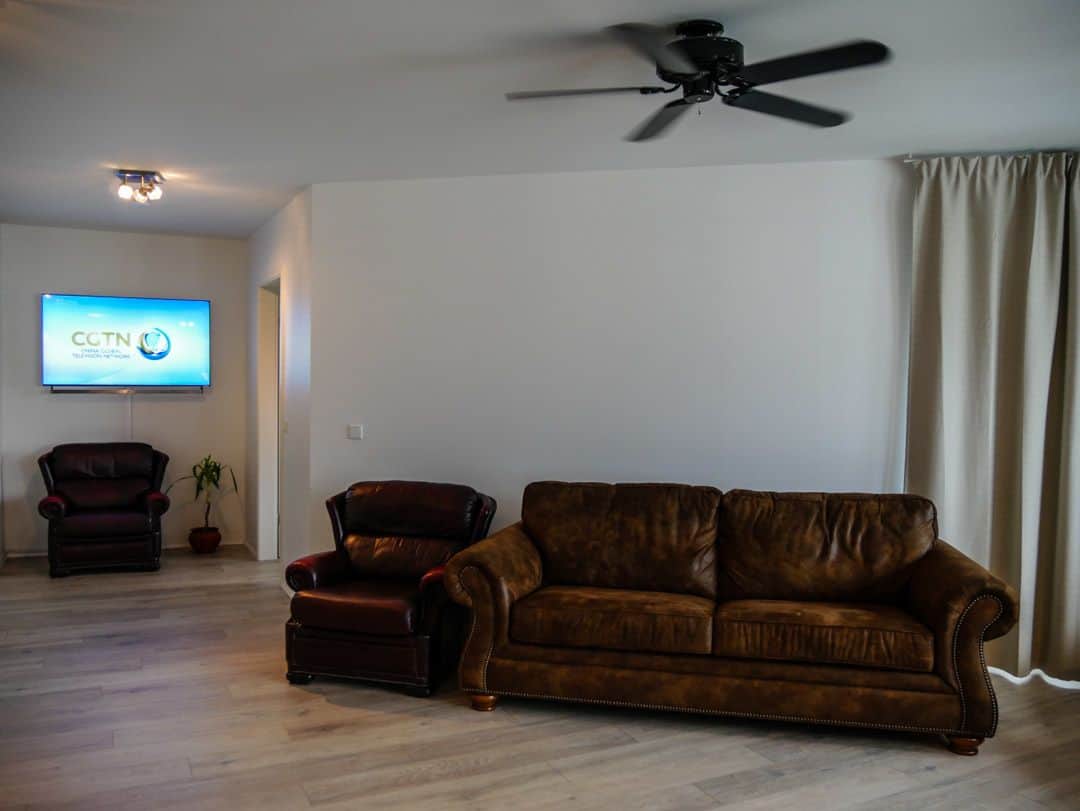 A large dining table suitable for six people adds to the appeal of this apartment for larger groups. We simply used it as our mobile travel office, spreading our maps, devices and local brochures all over it. 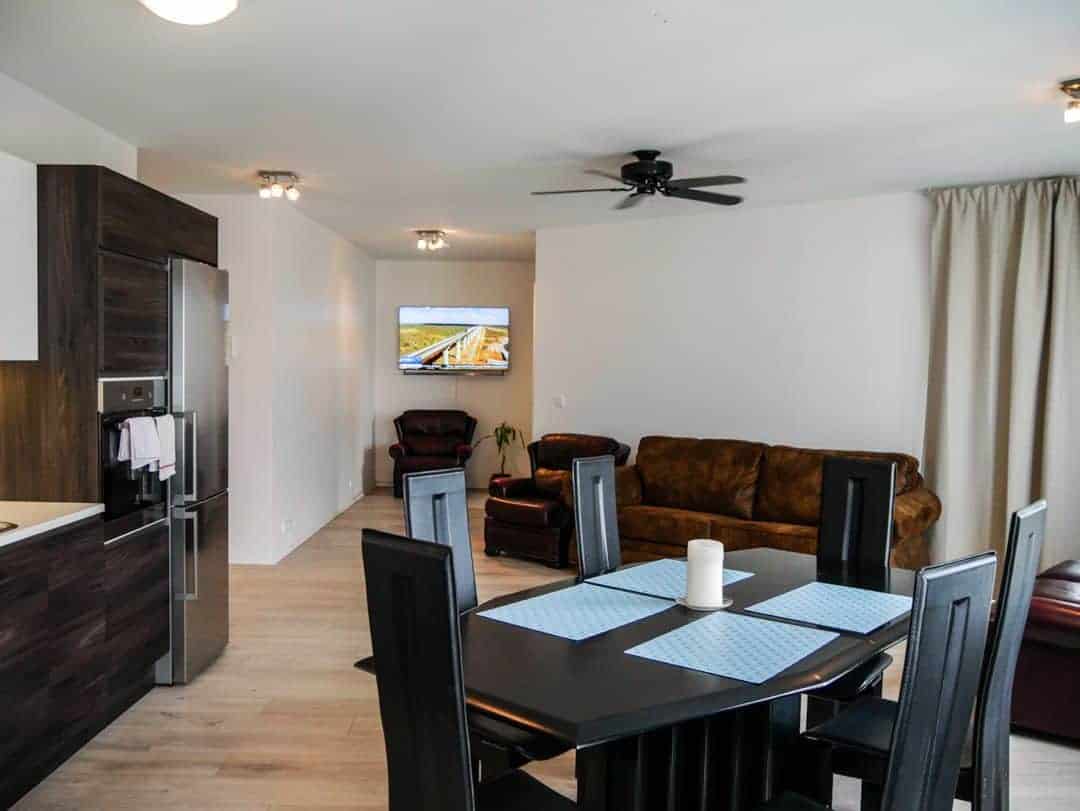 The windows open, allowing for fresh air if air conditioning isn’t your style and a door that opens up onto a small balcony. 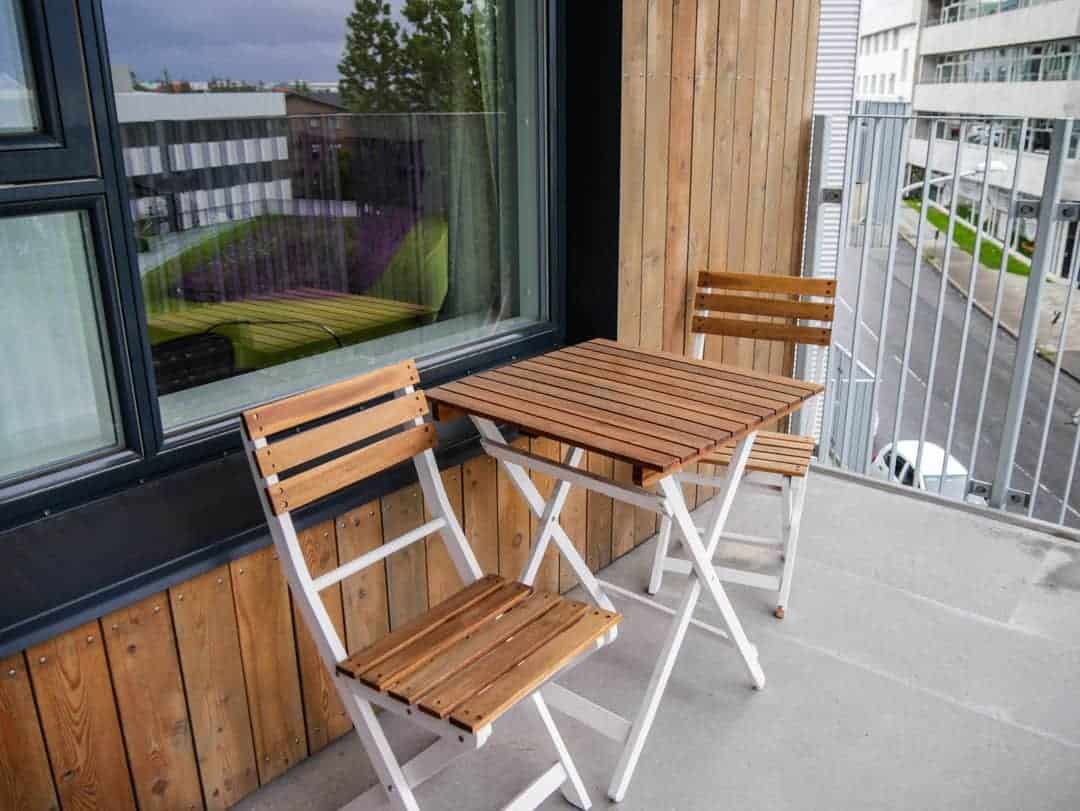 The apartment is serviced by an elevator which can only be accessed through a secure door.

When I realised we would arrive into Reykjavik in the early hours of the morning, I was concerned about our apartment access.  Thordur provided us with an excellent set of instructions about where the apartment was located, where we needed to get off the bus, and how to access the apartment after hours.  I just had to make sure I had a copy of those instructions with me as it would have been problematic without it as we needed access codes for keys etc.  If you are arriving by car, he will also provide parking information.

Cost of the apartment

Finding apartments in Reykjavik is an interesting process.  Iceland is a ridiculously expensive city and accommodation is at the top of the list.  Given this situation, I was pleased with the rate I got for this apartment, which was significantly reduced online.  As a couple, this is a price we have paid in other large cities in the world.  With more than two people in the apartment, the cost obviously reduces per head.

Search for other places to stay on Trip Advisor, where you can also view rates and availability and check reviews.

We loved the location of this apartment too.  With a view from the bedroom window of the famous landmark the Hallgrímskirkja church (see photo at the top of this article), we knew we were centrally positioned.  It is just off Laugavegur St, the spine of Reykjavik and home to many great cafes, restaurants, and the shopping precinct.  Reykjavik is an easy city to explore by foot and unless you need a car for other purposes, I would suggest saving money and getting some exercise instead.

If you wish to take advantage of the fabulous kitchen in the apartment, there are several supermarkets nearby, just make sure it’s a Bonus Supermarket to save the burn in your wallet.

How to get from Keflavik Airport to Reykjavik

Keflavik Airport is located approximately 38km from this apartment.  Taxis are not common in Iceland and are expensive to catch from the airport.  The Flybus is the best way to get to and from the airport.  It’s a regular service, with people who know what they are doing, so provides a comfortable and hassle-free way of getting in and out of Reykjavik.

If you are heading into Reykjavik, go outside the terminal once you have collected your luggage.  The buses are just outside and can’t be missed.  There is no need to pre-book as there are so many buses that a seat is always guaranteed.  Buses depart 30-40 minutes after every flight arrival and take about 45 minutes to get into the bus station.  Allow extra time for transfers to your hotel, apartment or hostel.

Tip:  If you can’t pronounce the name of the hotel you are going to, write it down and show that to the driver.  Even if you think you can pronounce it, I’m almost certain it won’t sound like it’s meant to.

The bus will stop at the BSI (the main bus interchange).  From here, smaller shuttle buses will go to most of the major accommodation places.  Be sure to keep your tickets as they will dictate which shuttle bus you catch and you will need to show to the driver. 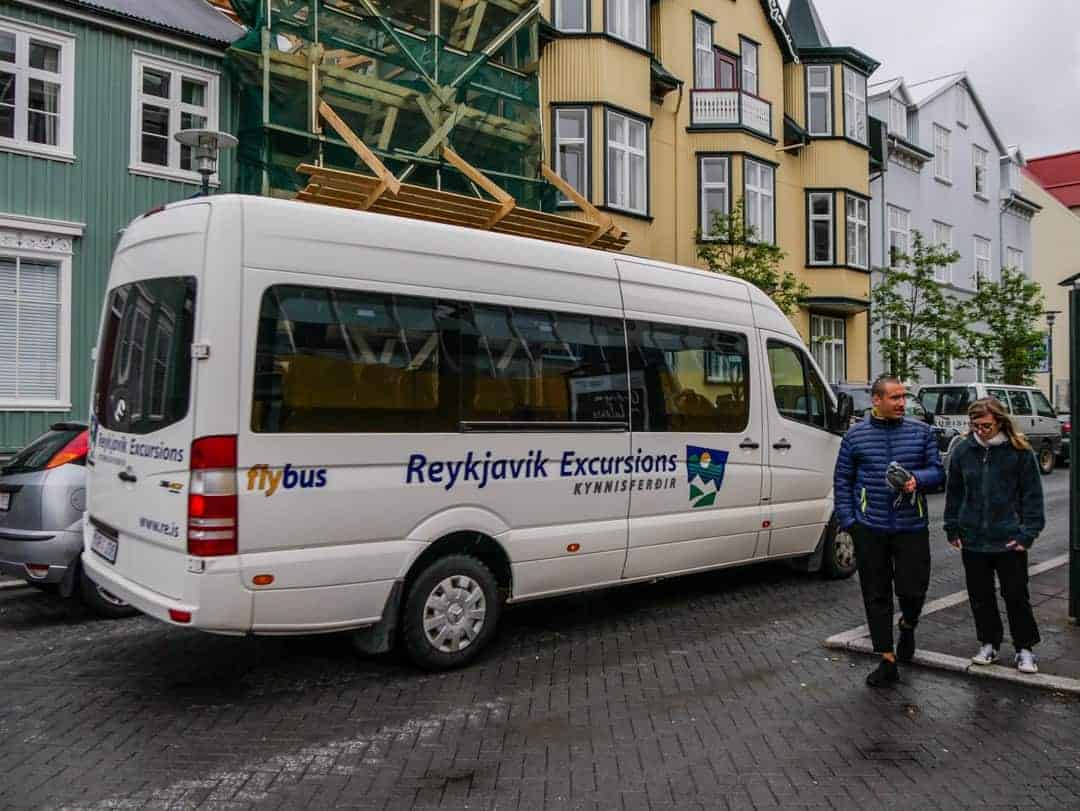 Credit cards are the preferred method of payment all over Iceland, including this bus.

Self Guided walking tour in Reykjavik

Campervan Iceland Review – how to get the best campervan in Iceland

Keep this pinned to your travel boards to save searching for it later!

13 thoughts on “Looking for apartments in Reykjavik, Iceland? Check out City Town Apartments”