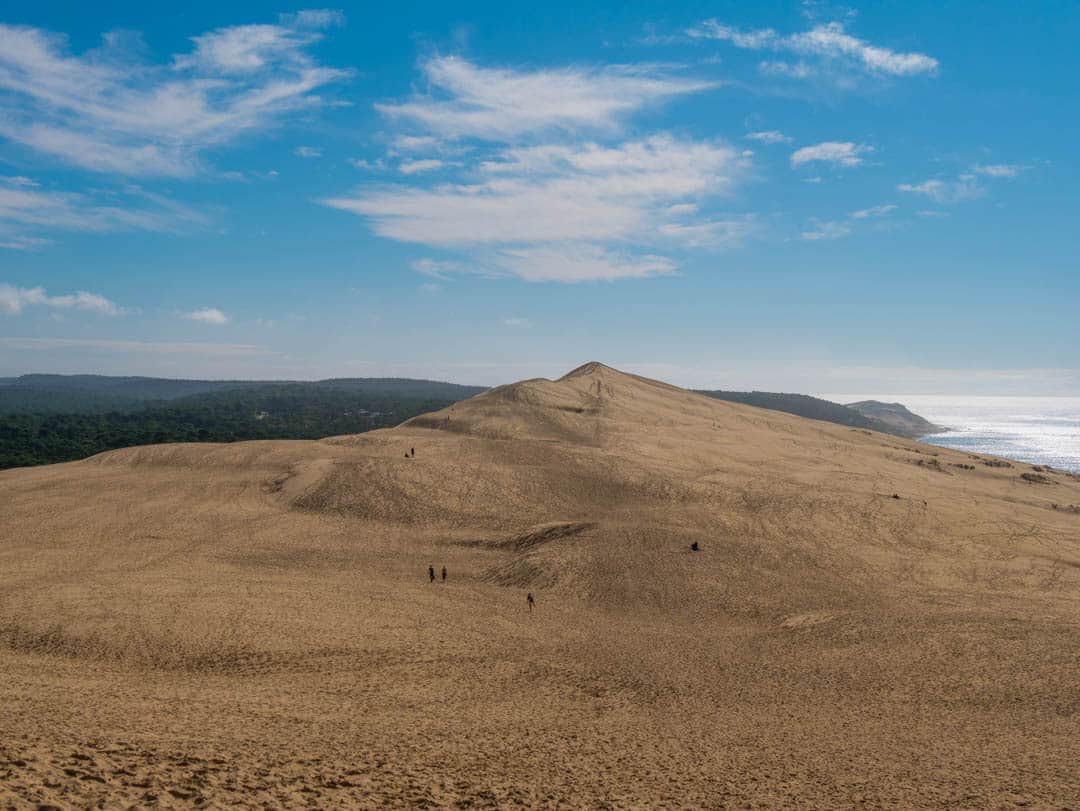 It’s not every day you get to see the tallest sand dune in Europe.  Nor is it a common occurrence to be close enough to be able to walk on and along it.  That’s exactly what we did whilst we were visiting Arcachon in the south-west of France.  100 or so metres up in the air, it felt like we were on top of the world.

The Dune du Pilat, or Pyla as it is known by the locals and French, is a big hunk of sand located on the eastern side of Arcachon Bay but on the western coastline of France, in the Nouvelle-Aquitaine region.

This enormous sand dune is approximately 500 metres wide and extends for nearly three kilometres.  It stands 107 metres tall, the key metric in making it Europe‘s tallest sand dune.  It sits in the middle of the water and the dense forest of pine trees, a common feature in this area and on the peninsula.  The sand is the giant wall between ocean and land, and from the ground, it’s an imposing one.

The dune is a natural phenomenon and a moving one at that.  The prevailing Atlantic winds blow the sand around, pushing millions of cubic metres of sand upwards each year.  What goes up must come down, and on the eastern side of the dune, sands are encroaching onto the pine forest below.  As this is a natural occurrence, dictated solely by the winds, the amount of movement each year is not consistent.

On average though, it is said that the dune is moving eastward at around five metres per year.  This might not seem like much, but the sheer volume of sand here means that this can have a significant impact.  History has already documented well the collapse of houses at the base of the dune, swallowed by the moving sands.

It was a seriously hot day when we ventured up the dune, even though it was out of peak season.  It’s not always possible to plan your trips in the shoulder season, but this is one location where it would be ideal if you could.  The sand dune will be packed in peak season, and the walk up to the top much slower given the number of people accessing it.  I don’t know about you but if I’m going to go up onto a huge sand dune, I don’t want it to be covered in people.  However, it’s the traffic that will be the most painful, crawling at a much slower pace along the only road in, and parking will be more difficult to secure also.

The Dune du Pilat is free to access and climb and is open all year round, 24/7.  That’s right, the dune can be climbed in the middle of the night and in the dead of winter.  Images around the dune actually show this mass of sand totally covered in snow!  At the entrance, there are several of the usual souvenir shops and food and drink vendors and cafes.

The walk from the main carpark is only about 400 metres, a little further if you are coming from the motorhome park.  There’s sand all around, so it’s obvious that we were in the right place, even though from here, we couldn’t see the dune.  It’s quite lovely actually, walking through the soft sand as the path leads you through the pine trees.  It’s also a little relief from the hot sun under here, and a great spot to sit and take a break on your return journey.

Suddenly, the dune appears and it quite simply cannot be missed, rising high up into the sky.  The steps, about 250 of them, have been built on one side to make it easier and more accessible for those who can’t manage walking up the dune in a freestyle fashion.

Having been across the bay and seen the dune, I also knew the view that lay on the other side, once I got to the top.  It was time to stop gazing and start walking.

Views from the top of Dune du Pilat

The views of the surrounding area start at about a quarter of the way up, with the pine forests filling the landscape.  They are dark green a strong contrast to the pale sands and the blue sky.  We lucked out on the weather that’s for sure. 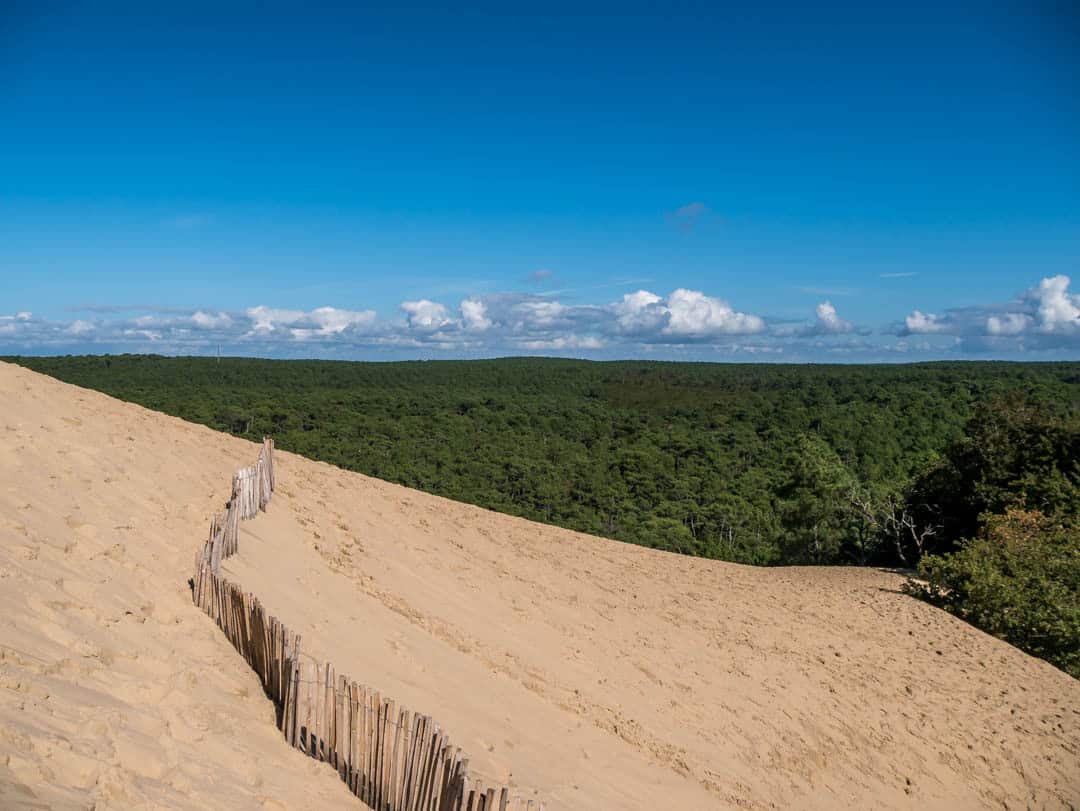 A number of wooden fences appear on the sides of the dune.  To many, they would seem an odd construction, but these flimsy-looking fences play a very important role.  These are erosion fences, strategically placed in certain areas to gather the shifting sands being blown by the wind. 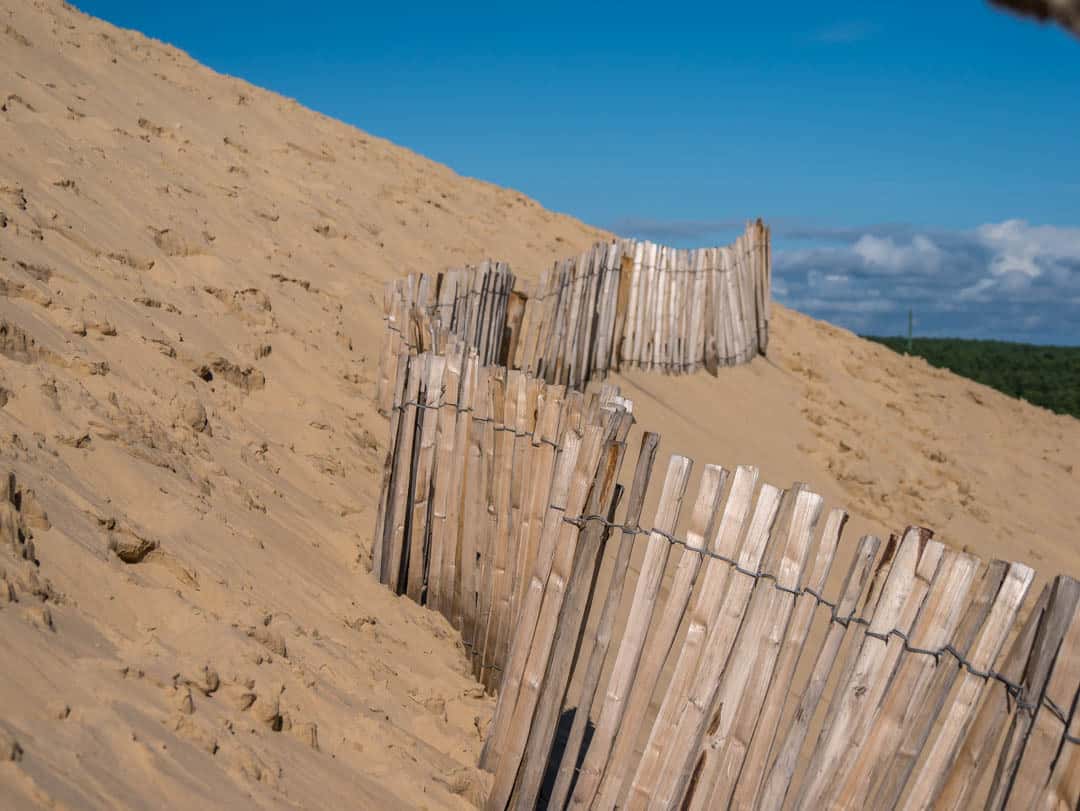 The climb is definitely worth it.  Not only are the views fantastic, but the sheer size of this lump of sand is mind-blowing.  It just looks like it extends forever.  Even more amazing for me was the number of people up here who looked like they were making a complete day of it.  Not content to just climb up and have a look around, they had settled in for quite some time.

They brought towels and miniature shade tents to go over their heads as they lay on the sand.  Women were up here sunbaking.  I understand it’s like a beach, but as a non-sunbaker, the thought just never occurred to me.  Kids had kites.  Yep, that one seems like a no-brainer with the wind up here.  People were sandboarding and in an old-style way, kids were rolling themselves down the sand, over and over again. 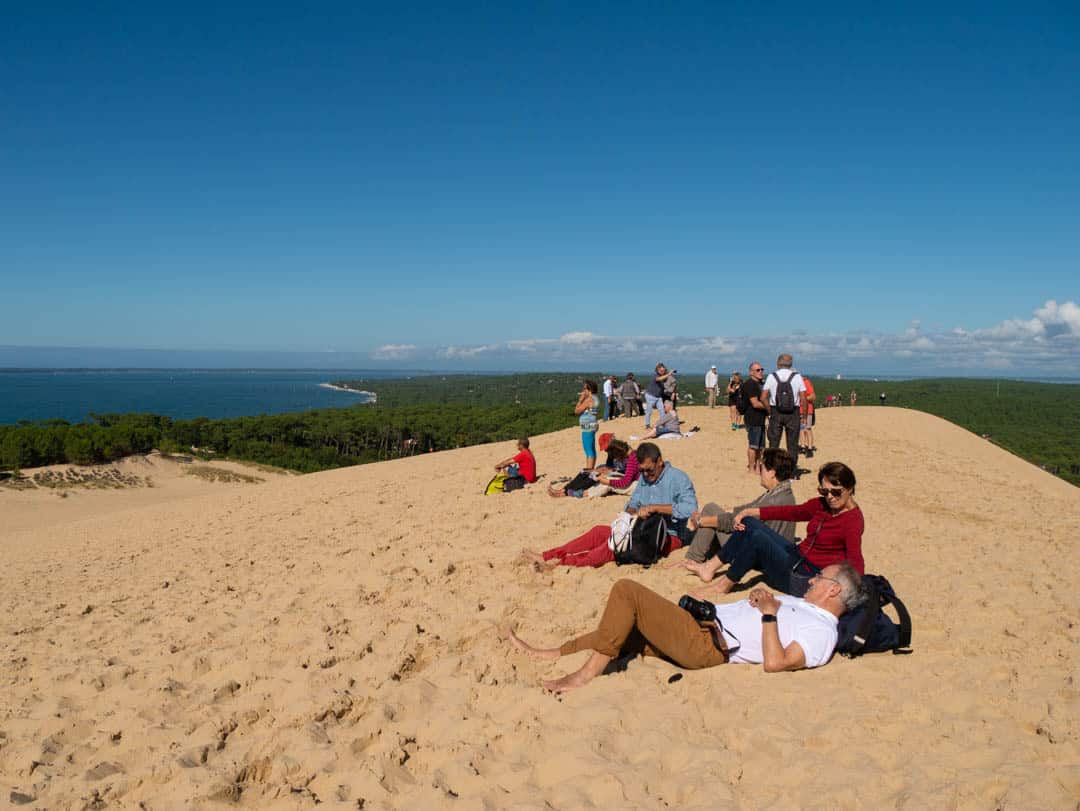 Whilst the dune itself is impressive, it is the surrounding landscape that completes the scene.  On one side, there’s the water.  The calm, blue waters of the Arcachon Bay and leading out into the Atlantic Ocean.  It’s a mix of sandbanks and ponds at low tide and inviting water when the tide is all the way in.  The tiny hamlets of the Cap Ferret Peninsula can be easily seen across the bay, a short ferry ride away.  The Cap Ferret Lighthouse, a beacon for seafaring ships, also stands prominently for all to see from over here.

Whilst we were up here, the Air Force buzzed us overhead in a couple of their super-fast fighter jets.  Perfect timing!

Getting back down the dune is easy.  The stairs operate in a two-way fashion so you can just make your way back down.  If the kids have given you a bit of a need for speed, you can always try and roll back down the side.

Getting to Dune du Pilat

It’s easy enough to get here from Arcachon or Bordeaux as the signage is quite frequent.  Any good GPS tool or Google Maps will also get you here with little trouble.

From Bordeaux take the A63 and then the A660.  Take the D259 exit which will lead you to the dune.  It’s an easy drive and should take an hour (traffic depending).

Trains connect Bordeaux and other cities to Arcachon but do not continue onto the dune.

Buses leave from the Arcachon train station (Gare d’Arcachon) regularly and takes roughly 30 minutes.  In 2018, an Express train was used for the peak season, taking passengers directly to the dune without stopping.

There are very good bike paths that run from Arcachon right out to the dune.

If anything is going to be difficult when you have a car at a major tourist destination, it’s going to be parking.  Prior to coming here, I researched as much as I could for the parking options for the motorhome.  There were endless comments about it being difficult and there being limited parking.  There were suggestions to park outside on the edge of the road but this appeared to be a reasonable target for fines, judging on the anecdotal comments.

Sure enough, as the road got closer and closer to the dune, we could see cars starting to park alongside the road.  A few motorhomes were parked in what I would consider to be fairly ordinary (and obvious) locations.  We drove further along the road, looking for suitable parking but nothing felt right and we seemed to be too far away by this stage.

Then we saw the carpark, a huge thing taking up to 950 cars, just off the main roundabout near the dune.  For a very reasonable amount of money, you can park cars and motorhomes here safely for up to 12 hours.

There is even a dedicated area for motorhomes, you just need to drive through the main car parking area.  It is signed for motorhomes and offers larger spaces in a shady environment.

The parking rates are subject to change so you should check the website for current pricing.  In general terms €4 car / €8 motorhome will get you two hours of parking in peak times.  In off-peak, it’s half that rate.  Six hours will set you back €8 / €12 in peak and half again in off-peak.

Note:  people in motorhomes/campers have obviously blotted their copybook here by staying overnight.  Anyone found “parking” here between 2 am – 5 am will be fined €50.

What to see and do in Bordeaux in 48 hours

France Passion for motorhomes in France