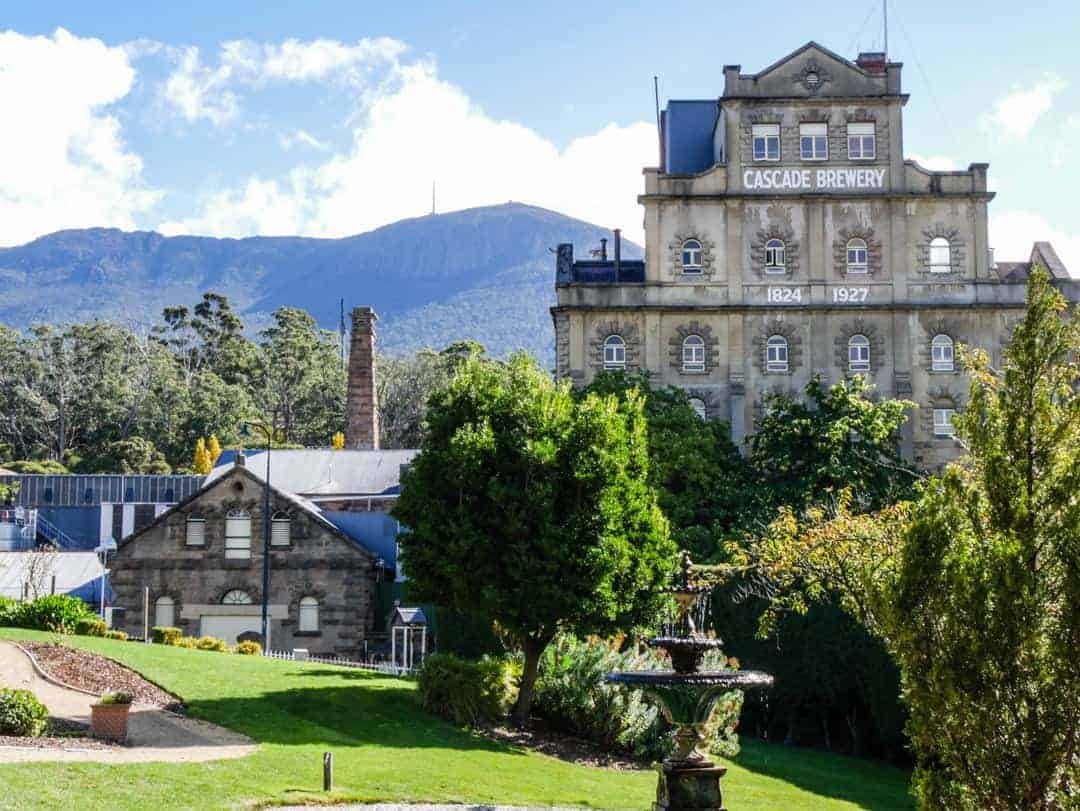 The best brewery tour in Tasmania

Whilst several mainstream breweries exist here, I think the best brewery tour in Tasmania is at the Cascade Brewery.  Visiting the Cascade Brewery during our visit to Hobart was just too good an opportunity to miss.  Sampling the local beers is something we’ve become quite accustomed to, and learning more about the brewing process seems to lend some extra authority to the whole drinking process.  Well, that’s our story anyway and we’re sticking to it.

The Cascade Brewery is a short distance out of Hobart and is easily accessible if you have a car.  For once, we had kept ourselves car free, so on this occasion, the public bus was the best way of getting there.  The bonus of course in taking the bus is that we didn’t need to worry about a designated driver!  I’d actually go so far as recommending the bus option, unless you have a non drinker in your group, as this will allow you to take full advantage of the suite of Cascade products.

The first thing you will notice on approach to the brewery is the beautiful building.  Dating back to the early 1800’s, it remains the hub of beer production for the Cascade label. 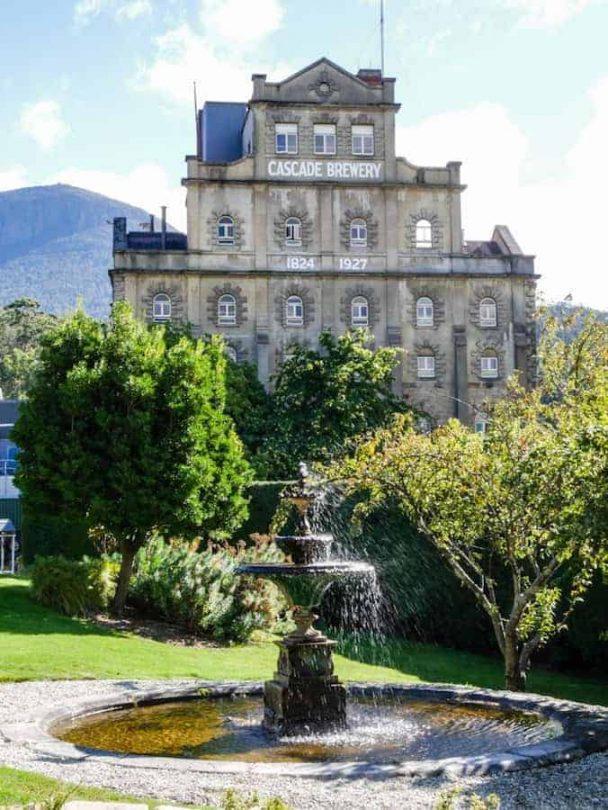 The second thing you will notice is the stunning gardens that surround the buildings across from the brewery. 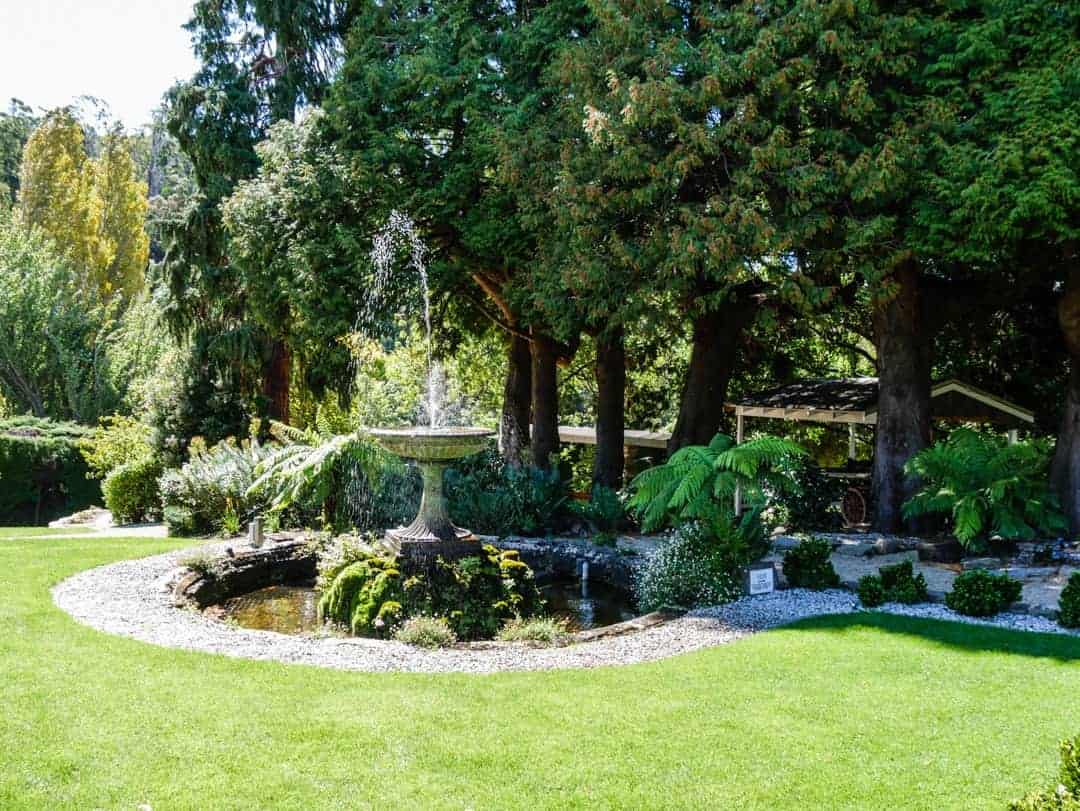 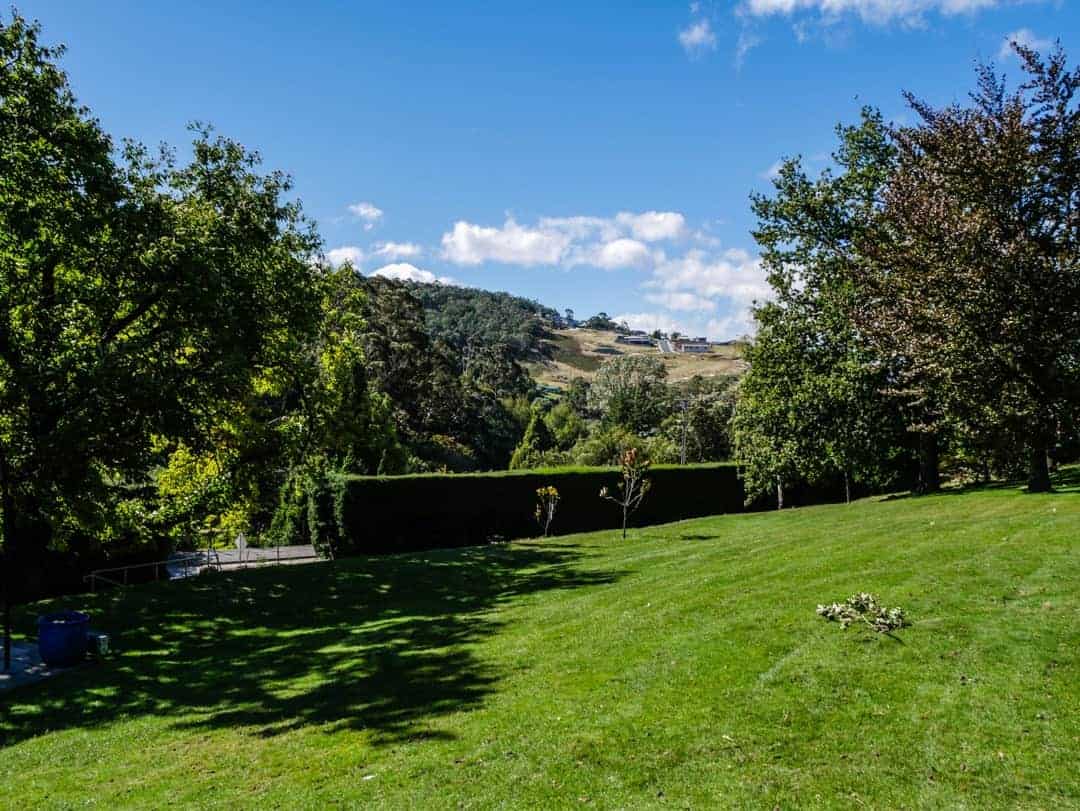 On a warm day, grabbing some food from inside the restaurant and sitting outside on these tables would be just perfect.  With the mountains in the background, and the Cascade buildings, it’s the best backdrop for a brunch or lunch.  On the day we were here, the wind was quite literally howling, hence why all tables were empty.

On the front of the building, two dates intrigued us.  The first was 1824, the second 1927.  Before I had even commenced the tour, I had a question for the guide.  Whilst it is usual practice to see a year of origin on the front of a building, it is a different matter to see two dates.

1824 was the year in which the Cascade Brewing Co was formed.  In somewhat typical Australian fashion, it operated as a sawmilling business, despite its name.  Later in 1831, an English man, Peter Degraves, saw value in using the crisp clean waters flowing down from Mt Wellington and used it to brew beer.  The first beer under the Cascade Brewing Co label was produced in 1832, making this the oldest working brewery in Australia today.

To assist with more modern technology, three levels were further added to the brewery, in keeping with its heritage and style, in 1927.  This is where the second date on the building originated from.

The brewery had its ups and downs over time.  With the death of Peter Degraves, his sons took over the ownership and later sold to private enterprise.

In 1967, a raging bushfire swept down Mt Wellington and through southern Tasmania, taking everything in its path, including the brewery.  Despite being extensively damaged, the owners vowed to rebuild, and with the help of the workers (none of whom had to be made redundant) and other Tasmanian brewing companies, Cascade was back on its feet in three months.

Today, Cascade is the premier brand in southern Tasmania.  Only some of its beer is exported out of Tasmania, meaning that a visit here (and to Tasmania) allows you to get a taste of a beer not readily found in the market.  It’s a shame in a way as the beers I loved the most are the ones I can’t get at home, but at the same time, it makes it a little special.  Despite higher demand, Cascade limits the production of its own brew and uses excess production capacity to produce for other labels including Matilda Bay (Fat Yak, Wild Yak etc)

Did you know the X reference to beer relates to the alcoholic strength?  So, for example, a beer with one X is relatively low in strength as compared to one with XXXX.  This process of identification was all that was used before technology and improvements in science meant it could be measured more accurately.  Having been a Queenslander all my life, it was a little embarrassing to learn this is why our local beer called XXXX (Fourex) is so named.

Tasmanians love their beer and those who worked at the brewery loved it even more.  Right up until the early 1990s (if you can believe that !), workers were allowed to drink on the job.  In the very early years, workers drank as much as they liked all day.  As the years moved on and the brewery fell into more corporate ownership, the rules were modified.  However, with a workforce that was used to drinking all day, it wasn’t an easy change to make.

Today, stringent health and safety legislation prevents any of this from happening however free beers are still put on for the workers every Friday.

If you love beer and are interested in the production process then this tour is for you.  With only an hour of your time required, it could be suggested that even if beer wasn’t your thing (but history and old buildings were), then this would still be a great tour to be part of.

Such is the demand for these tours, they are run every day (except Christmas Day and Good Friday), from 10 am until 5 pm.

The tour starts at the front of the building where a short history of the brewery is provided.  From there, the tour moves inside the building and through the various stages of production.  Upon completion of the tour, the group moves back across to the Visitor Centre for the final part of the tour, the tasting.

The tasting is generous.  I thought, pre-tour, that the tasting would see us standing at the bar having a few sips of beer from the draft taps.  Not so.  Each person receives a beer flight, containing four 7oz glasses of any beer or cider of your choice.  We mixed it up so that we could spread our taste buds across as many of their beers as possible.  The lager, draught and pale ale all came up trumps for me. 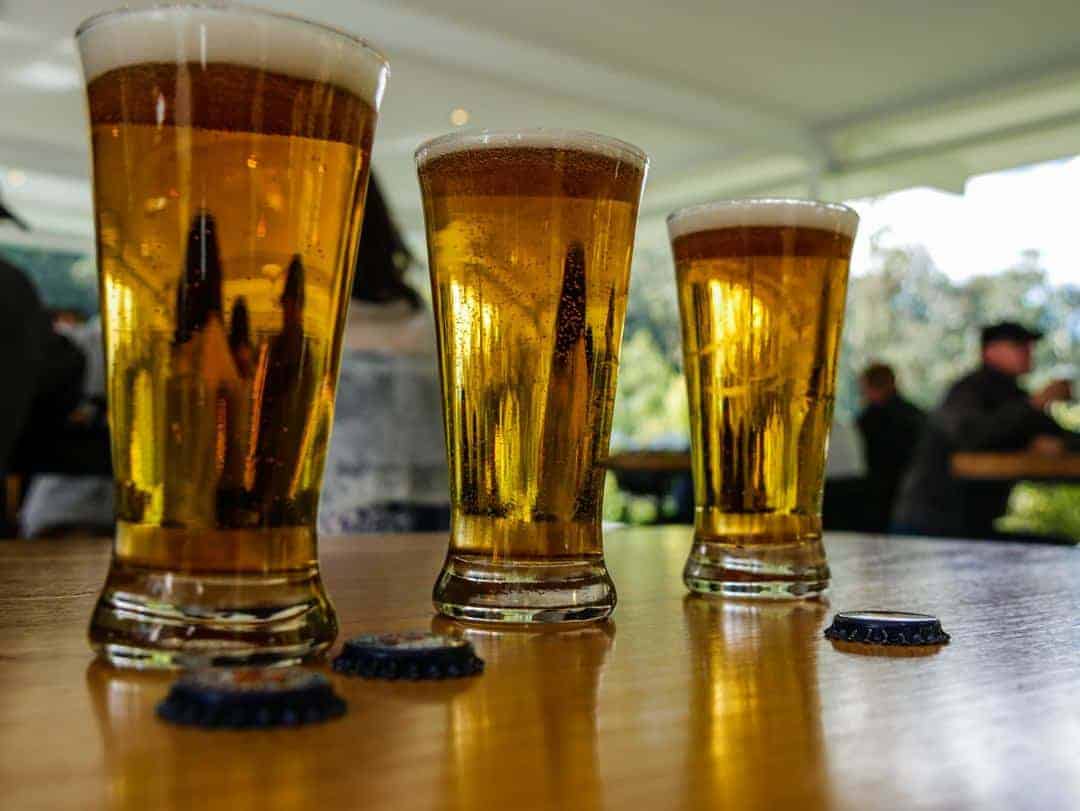 Tickets prices for the tours may be found here.

Inside the restaurant, copper pipes reach from the floor up and over the bar, carrying the Cascade liquid gold to the glasses of patrons.  The bar and restaurant have been designed to let the outside in.  It’s a great way of seeing the chilly wind whip through the trees whilst being tucked up inside in the warm, drinking frosty beers.  Sounds like heaven, right?

The bar and restaurant is open for usual business seven days a week.

The Cascade Brewery and Visitor Centre is a great place to visit, whether you are doing the tour or not.  Be sure to check it out if you are in Hobart.

There are plenty of BnBs around Hobart and its surrounding areas.  We chose to stay at the Mantra Collins in the CBD, simply because of its proximity to everything.  You can read more about that stay here.

Pin this to your travel boards for future reference