Skip to content
Home > Destinations > Boondall Wetlands walk: One of the best nature walks in Brisbane 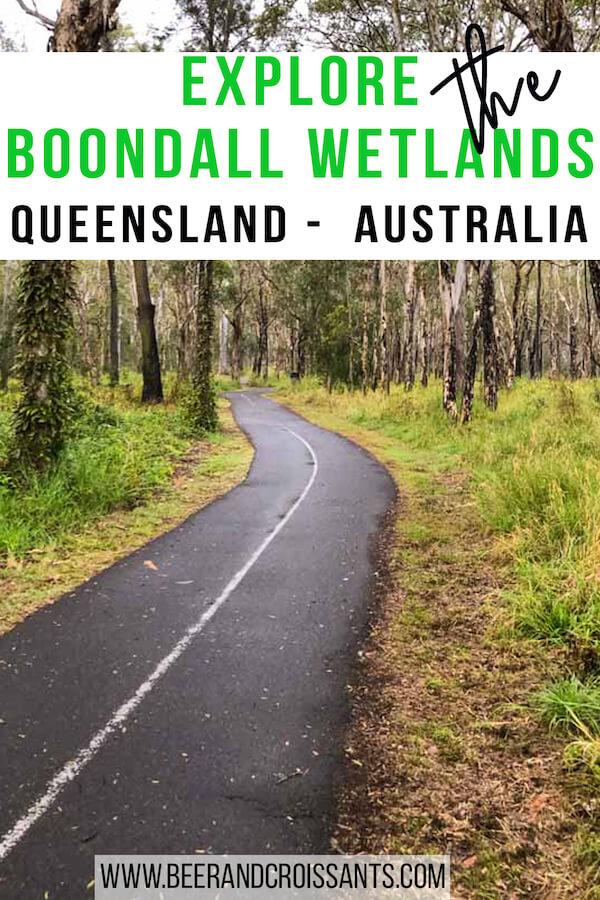 The Boondall Wetlands walk is one of the premier walking tracks in Brisbane. Queensland is blessed with beautiful places to hike and walk. From the rainforests of Springbrook National Park in the Gold Coast hinterland and in the Daintree to the mountains of the Sunshine Coast, western locations like Carnarvon Gorge, the city walking tracks of major cities like Brisbane and so much more. Regardless of your level of fitness, there’s a walking track or hiking trail waiting for you somewhere.

At the Boondall Wetlands, the protected reserve has been transformed in a way that allows nature to co-exist with some excellent walking tracks and cycle paths.

Where are the Boondall Wetlands?

The Boondall Wetlands can be found in the north of Brisbane, the capital city of Queensland. They are an important part of the environment in an area close to the ocean, covering 1,150 hectares of land. Located approximately 15 kilometres north of the Brisbane CBD, it’s home to melaleuca forests, mangroves and grasslands. With its close proximity to Nudgee Beach, there are also plenty of tidal flats to be found.

The Boondall Wetlands lie between the Brisbane suburbs of Boondall and Shorncliffe.

The importance of the Boondall Wetlands

The Boondall Wetlands are so much more than a nature reserve and a place for great walking and cycling tracks in Brisbane. They are an integral part of local indigenous culture, and there are many important areas both within the Boondall Wetlands and in locations close by where there is evidence of the local people who lived here.

Over time, the area that we now know as the Boondall Wetlands has been owned by many different entities including the Catholic Church and local government. Concerns from locals about the potential for urban development of this site led to the Boondall Wetlands becoming a protected natural reserve in 1990.

The easiest place to start any of the Boondall Wetlands walks or to access the bikeway is in front of the Environment Centre. From here, different walking tracks noting the direction and distance are placed at the entrances to the paths. There is also a large information board with a Boondall Wetlands map so that you can get your bearings and decide which way you’d like to walk.

The Billai Dha-gun walking track is an easy walking trail that can also be completed quite quickly. The loop starts and finishes at the Environment Centre and has a track that is a blend of hard stony gravel and timber boardwalks. It can get a bit muddy in wet weather.

The main track running from the Environment Centre is a 13-kilometre loop and is officially known as the Boondall Wetlands Bikeway. However, it is co-share with those who wish to use it as a walking track as well. Whatever your preference for exploring this area, the track will take you right through the wetlands, providing excellent opportunities to observe the animals and plants, en route to the end of the track at Nudgee Beach.

The Boondall Wetlands Bikeway and walking track is a mixture of bitumen, hard compacted gravel, concrete, rubberised compound and timber boardwalks, usually over the water areas.

Keep an eye out for the Nurri Millen Totem Trail as you walk through the wetlands. These cast aluminium totems are part of the Brisbane City Council public art display and are located throughout the wetlands to recognise and celebrate the indigenous culture of the area. There are eighteen of them in total.

Once you get to the end of the wetlands, the walking route continues along Nudgee Road, down to Nudgee Beach. Here there is a mixture of footpaths and grassy shoulder areas on the side of the road.

For a break along the way, stop at the Ann Beasley Lookout, named after a local environmental advocate, for a view over the top of the wetlands.

The walkway is not a difficult one, with the only incline being near the Nudgee Transfer Station.

As this is a shared walking track/bikeway it is important to be aware of your surroundings and where you are walking on the track. Most cyclists are considerate and will ring their bell well in advance, but some don’t. Keep to the left when walking and always look in front and behind before crossing paths or changing direction. Out on Nudgee Rd, there will be plenty of cyclists, particularly in the early morning and vehicles.

Other things to do at the Boondall Wetlands

If you have time, and you aren’t walking or cycling outside of normal business hours, be sure to pop into the Environment Centre. It’s a great source of information about the area, especially the wetlands flora and fauna. With interactive displays, it’s a perfect learning centre for children too.

Not far from the Boondall Wetlands, tucked in behind a university and the busy Gateway Motorway, the life of the local indigenous Jagera people can be seen. It is one of only two locations where an indigenous Bora ring can still be found.

Essential items to take to the Boondall Wetlands

How to get to the Boondall Wetlands

1 thought on “Boondall Wetlands walk: One of the best nature walks in Brisbane”