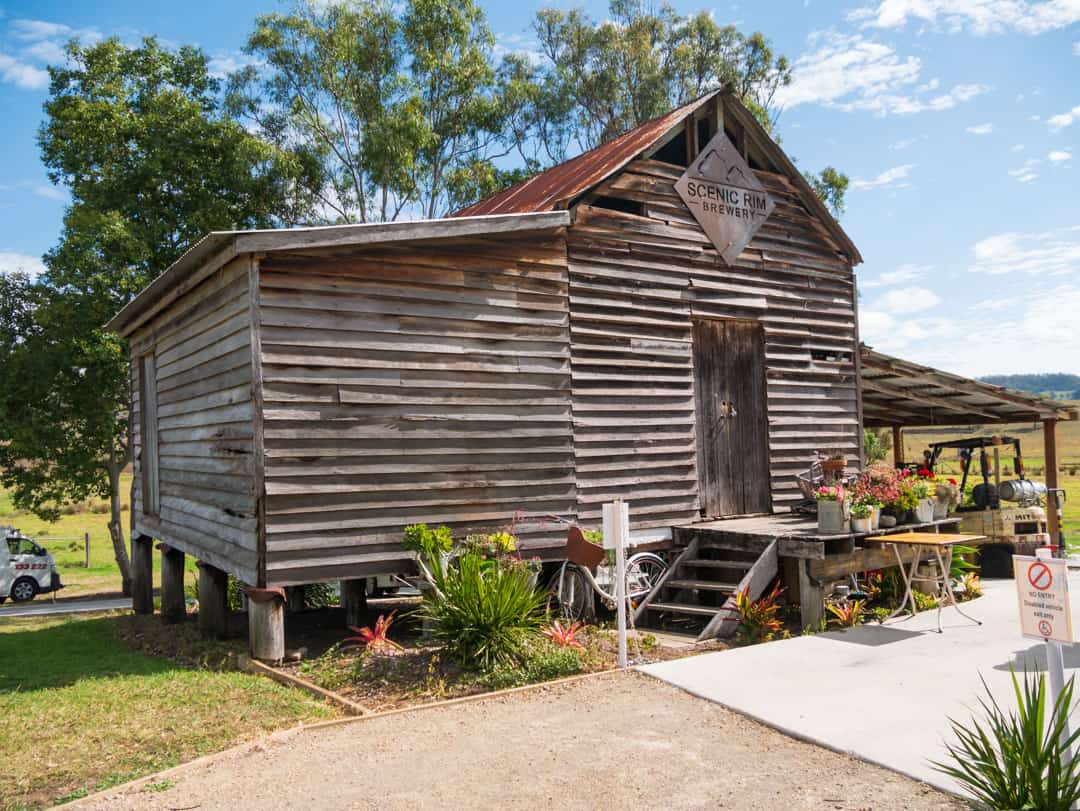 As the capital of Queensland, Australia, there is plenty to keep you occupied in Brisbane.  Often touted as the “poor cousin” to the more well-known cities of Sydney and Melbourne, Brisbane is taking on the challenge.  With fabulous weather all year round and a relaxed, casual vibe, Queenslanders, as we are fondly known love our state and are happy to share it with those who visit.  Brisbane is perfect for a quick one or two day trip, but it’s also perfect to spend a week or two here as well.

A longer visit will also mean that you can include some of the many places to visit near Brisbane.  Less than an hour’s drive from Brisbane and the Gold Coast is the region known as the Scenic Rim.  It’s an area well known for weekend getaways from Brisbane.  These days, it’s also raising its profile as a food, wine and produce destination.

Whoever knew the humble camel could be so interesting? I was astounded to learn that a fully functional camel farm and dairy existed so close to the city of Brisbane.  Summerland Camels, with a herd of around 860 at present is the third largest camel dairy in the world.  The top two are located in the Middle East, a country often immediately associated with this lumpy animal.

The first thing I notice when I arrive at the farm is the absence of any farm-related smell.  The paddocks are clean, ably helped by the dung beetles that are part of the farm’s responsible farming practices.  Their work in breaking down the camel’s excrement is just part of the process in ensuring that everything done on this land supports the environment and various ecosystems that exist.  The surrounding creek is full of platypus and lungfish and koalas can be found in the native trees.  There are no chemicals used on the property at all. 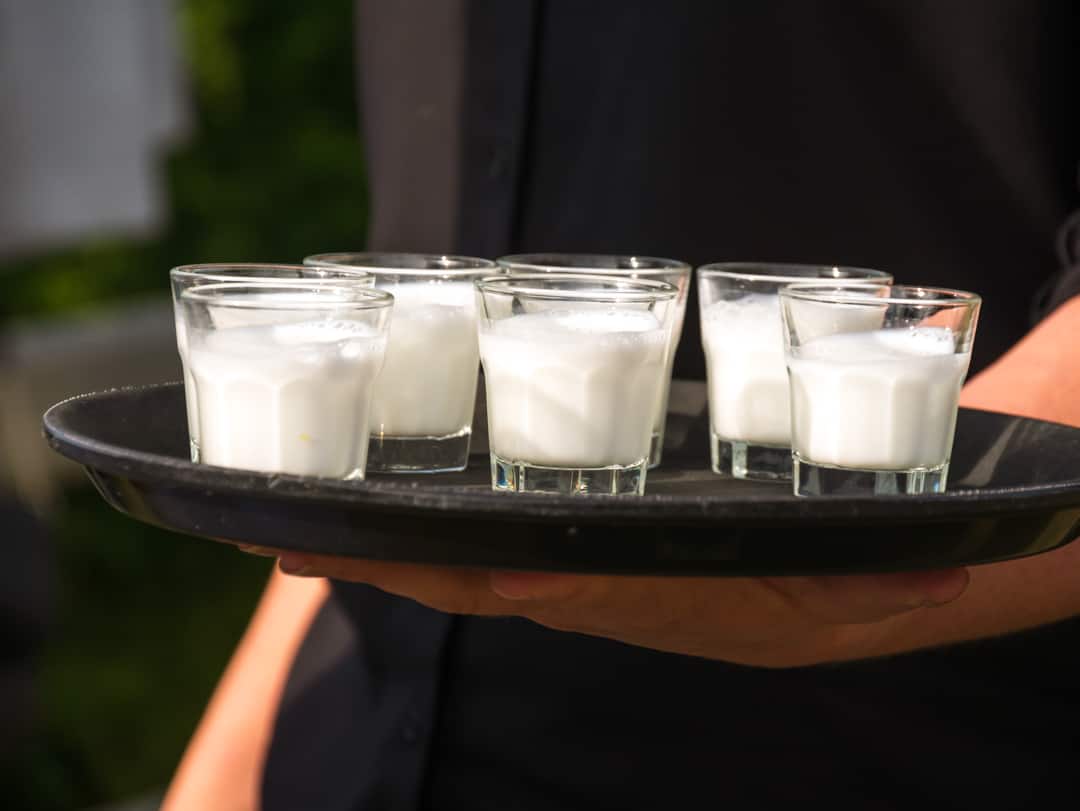 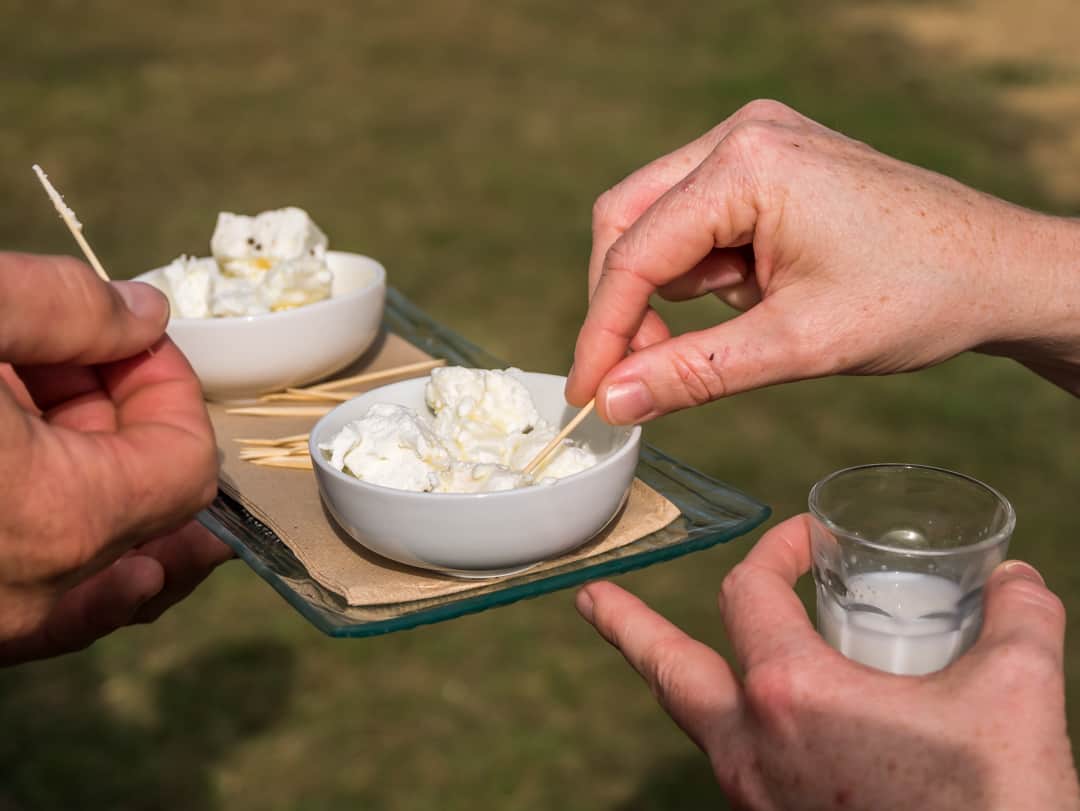 I spent some time with one of Summerland’s co-directors who knows more about camels than I ever thought possible.  Jeff left his physiotherapy practices in Sydney behind, moving into a world of camels.  Here at Summerland, they milk the camels every day, getting anywhere from 2-12 litres per animal.  They are currently milking around 200 per day, but have plans in place to milk around 1,000 in the future.  It’s the only milk in the world that has no listeria and they have found ways to pasteurise it so that only a small amount of the goodness of milk is lost. 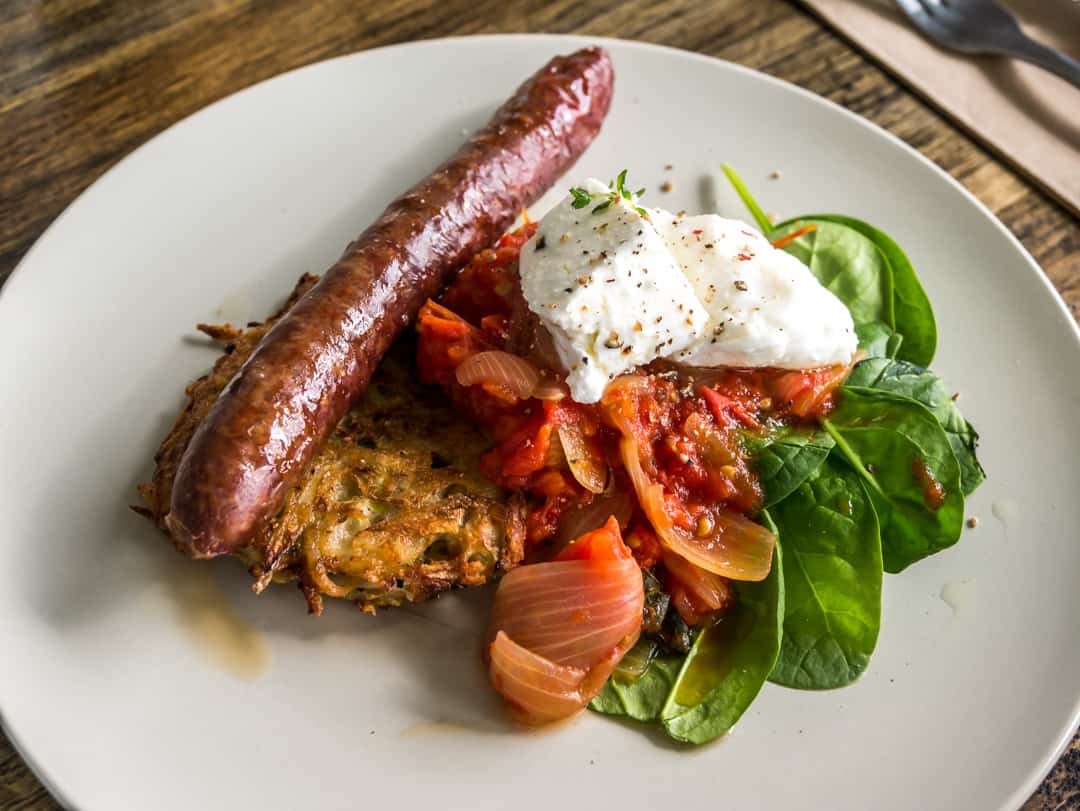 On-site, they also make camel fetta, halloumi, fromage blanc and gelato.  Camel milk is also one of the emerging dairy products for people who have health issues.  It also doesn’t have the proteins in it that cause issues experienced by people who have a sensitivity to drinking cow’s milk for example. 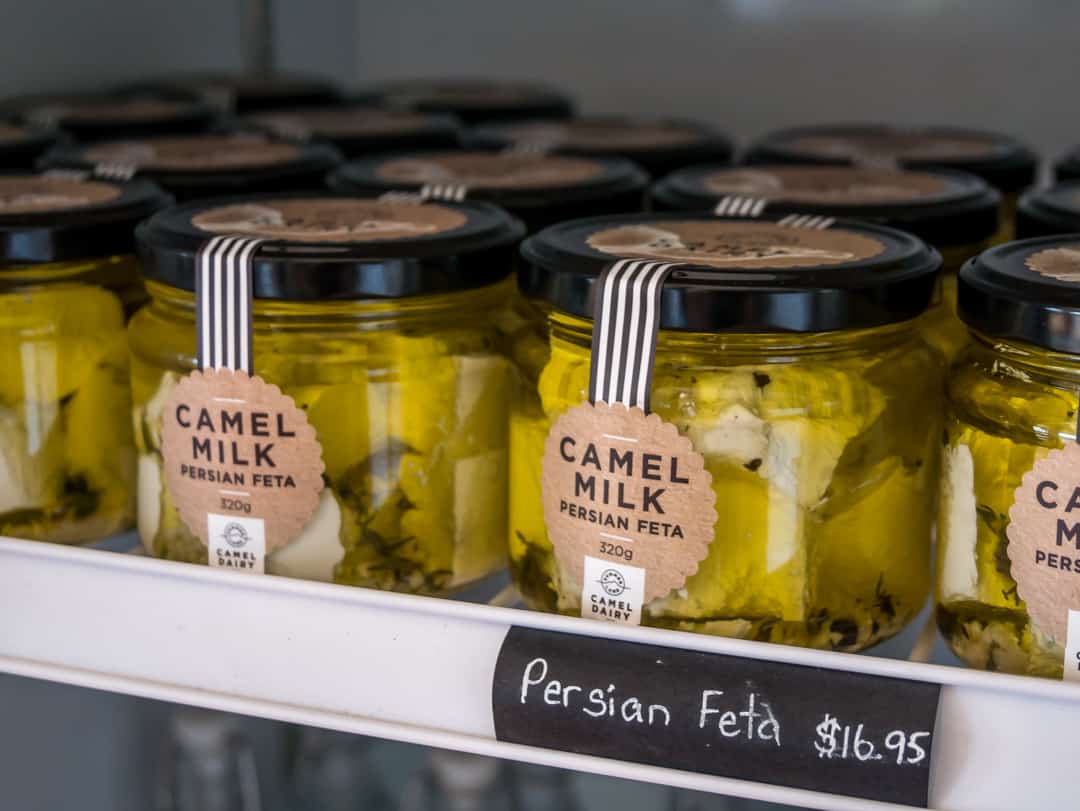 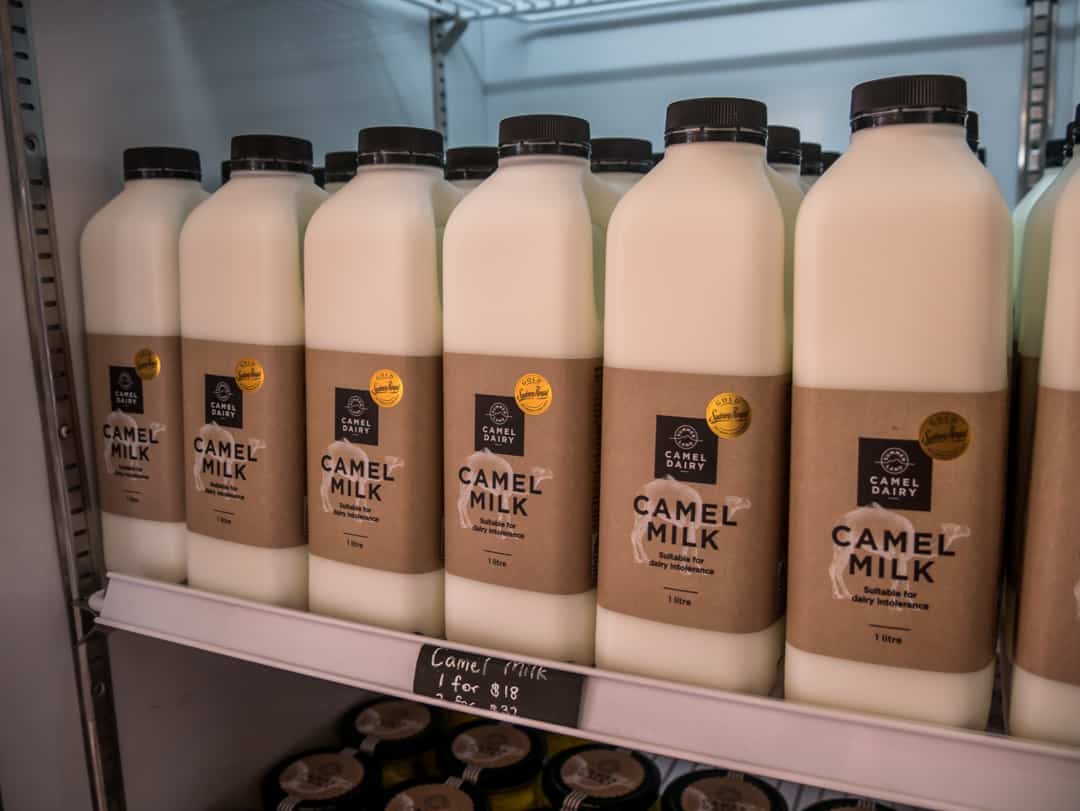 A range of skincare has also been developed to help skin issues such as psoriasis and eczema. 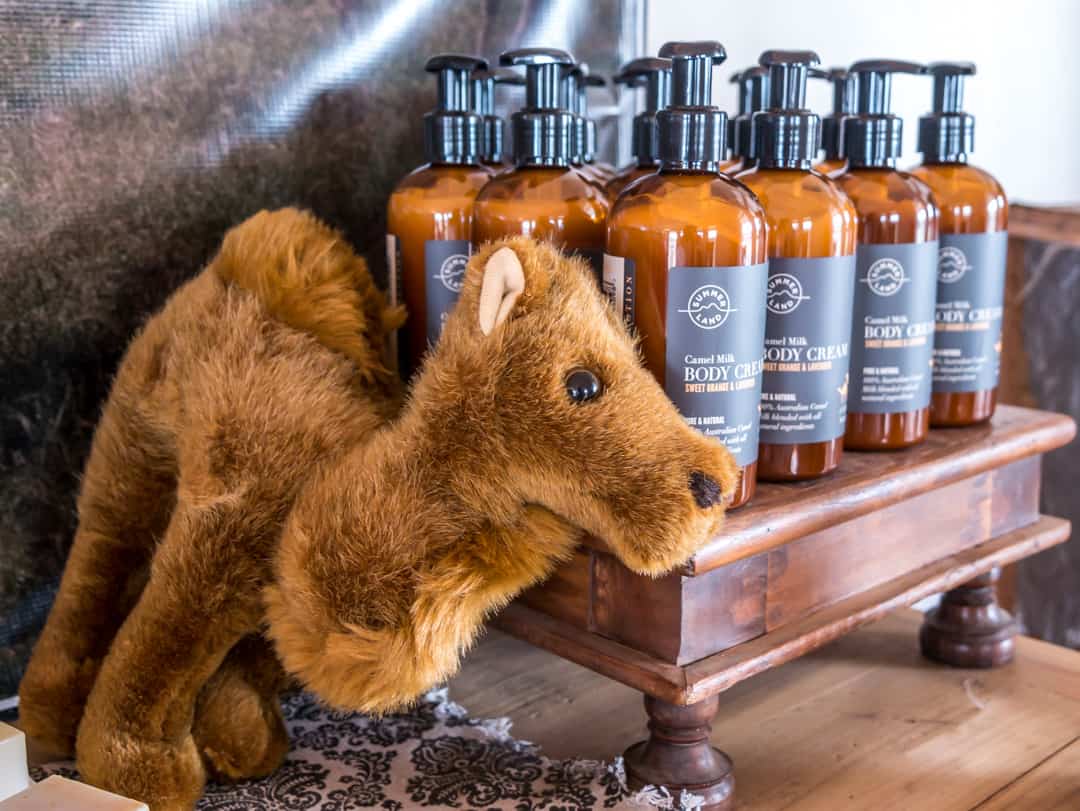 In the small town of Mt Alford, the Scenic Rim Brewery does a roaring trade.  From a humble former corner store, owners Michael and Wendy set about creating a new life path for themselves.  Having moved to nearby Lake Moogerah some years before, they fell in love with the area and started thinking about establishing a business.  Michael, a builder had “an insatiable thirst” and in 2014, the corner store, built in 1884 was purchased.

With a design brief to keep as much of the original building intact, the Scenic Rim Brewery has become the heart of the town.  Starting off slowly, as is the case for most new business startups, 30,000 people a year now make the pilgrimage to try out new beers and old. 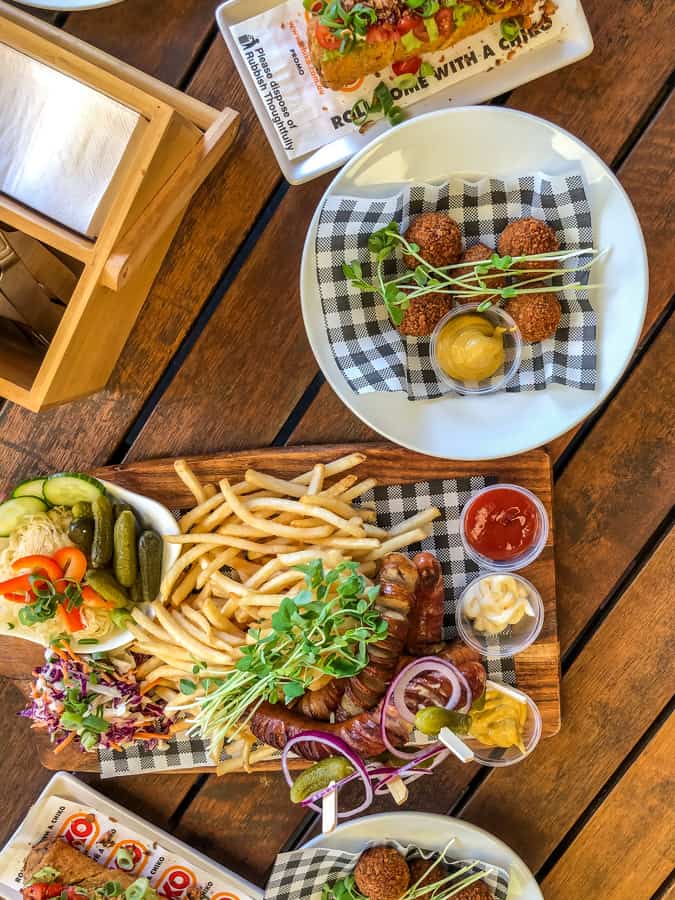 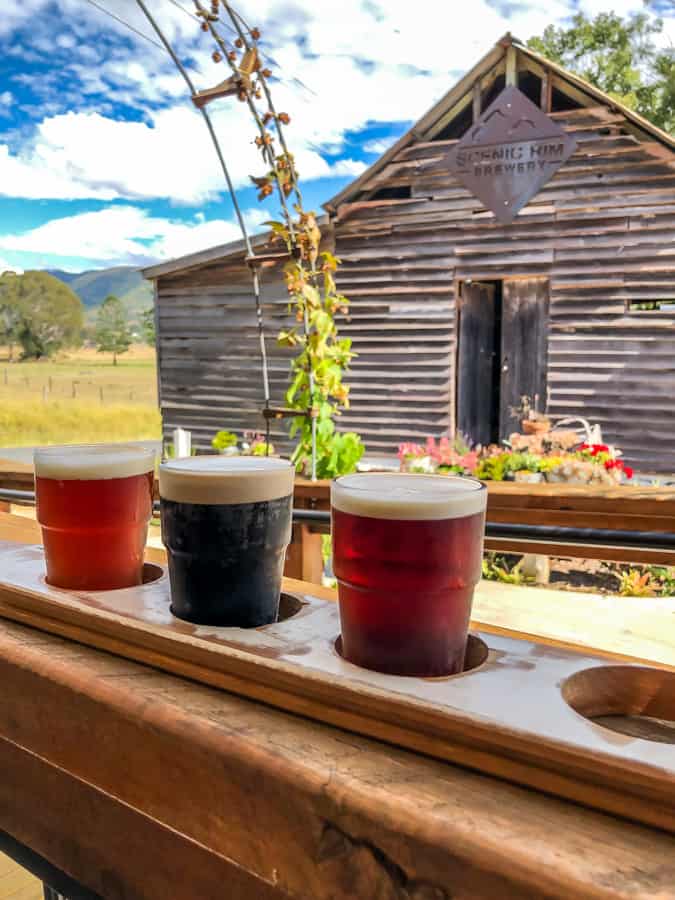 They also come for Wendy’s homemade food.  Wendy, with her Dutch heritage, creates hearty, warming food that is perfect alongside a cold glass of their finest.  I can never go past the Bitterballen with their slow-cooked beef inside a crunchy exterior.  It’s lucky there are only five in a serving as I could easily eat double that. Others must agree as Wendy made 6,000 of these delicious balls last year alone.

There are hotdogs, made with Kransky or the enormous Wurst platter featuring bratwurst, frankfurts and cheese Kransky, alongside sauerkraut, fries and pickled vegetables. In a nod to an Australian fried food institution (which I note I have never eaten in my life!),  there is a pimped up Chiko Roll, with avocado, shallots, tomato and chilli sauce. 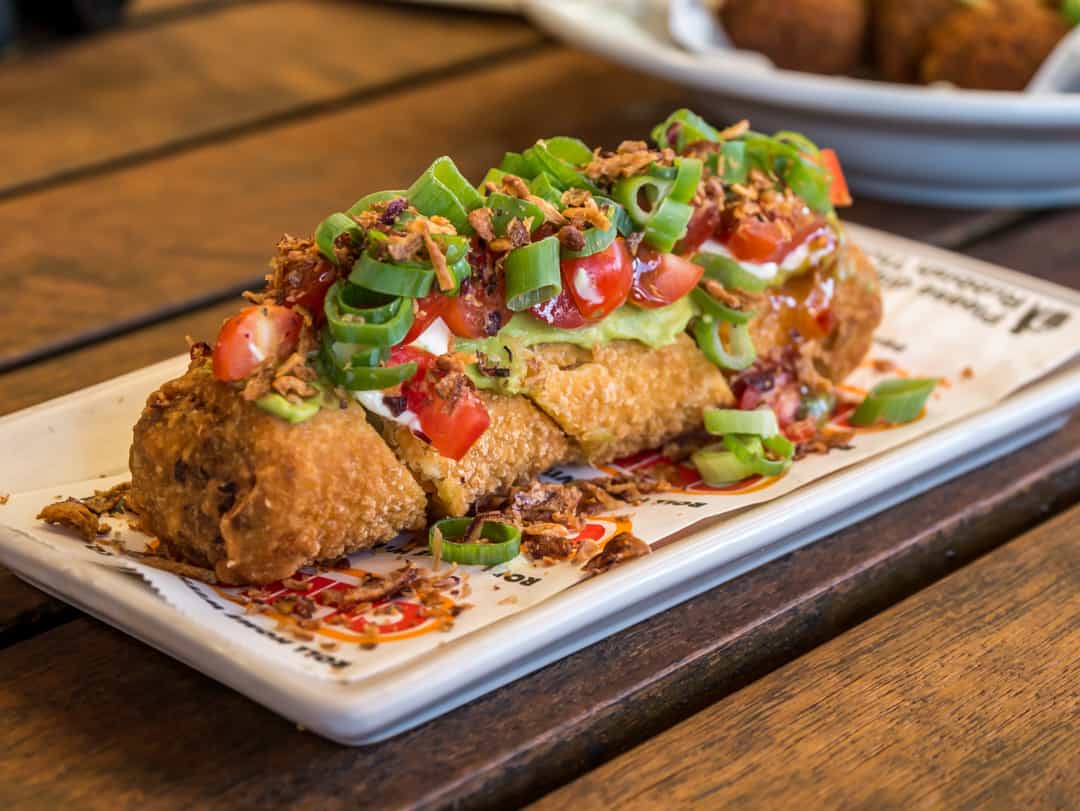 All the beers on tap have quintessential Australian monikers, making the most of our slang and ability to shorten everyone’s name.  It’s the perfect location for lunch or a couple of quiet ales on the rear deck.  If you are not a beer lover, never fear, Wendy’s scones are a great offering as are many of the locally made and sourced condiments on sale inside.

It’s also dog-friendly which is another reason why it’s at the top of my list of places to visit in the Scenic Rim. 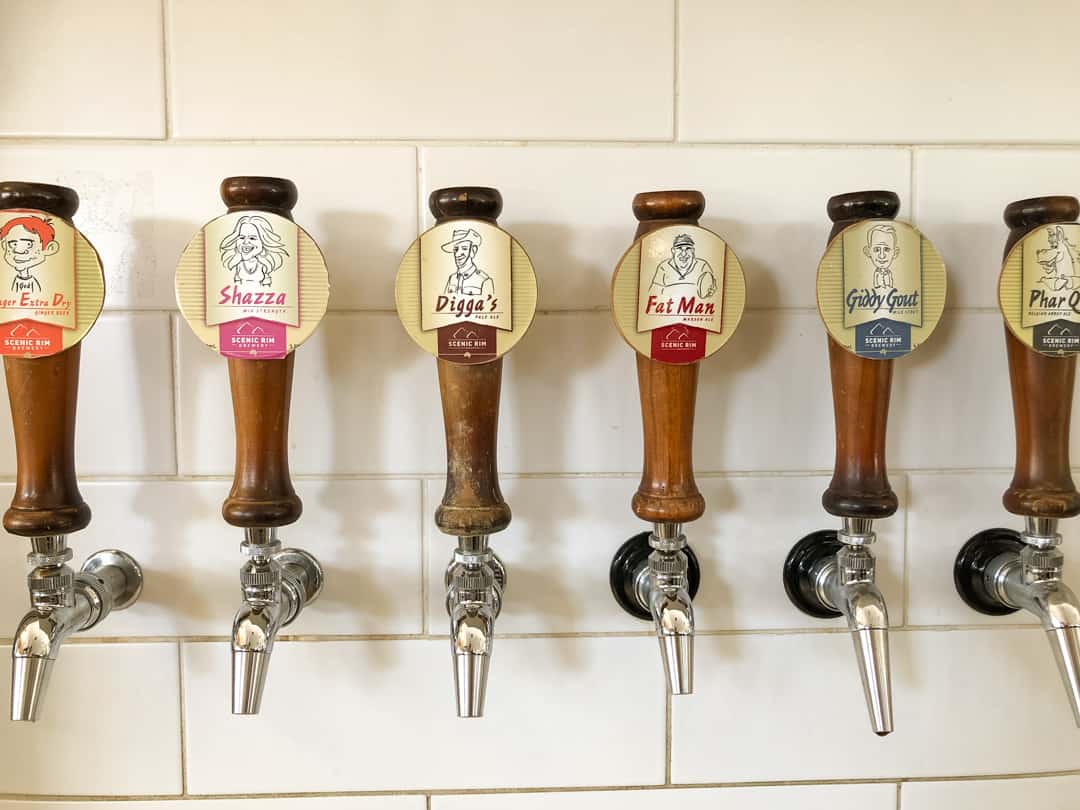 It had been years since I visited theKooroomba Vineyards and Lavender Farm but I was so pleased to see it looking just as beautiful as I remembered.  Perched up on a hill, the stone and timber building that serves as their cellar door and restaurant dominates the landscape.  From the rear, you can look out over six hectares of lavender farmland and vineyards.  There are a number of wines produced for the Kooroomba label that are waiting to be tasted as I enter the building that is just as beautiful on the inside as it is outside.

The tasting is perfect to have before dining as you can have a sample of the wines before you commit to buying a bottle inside. 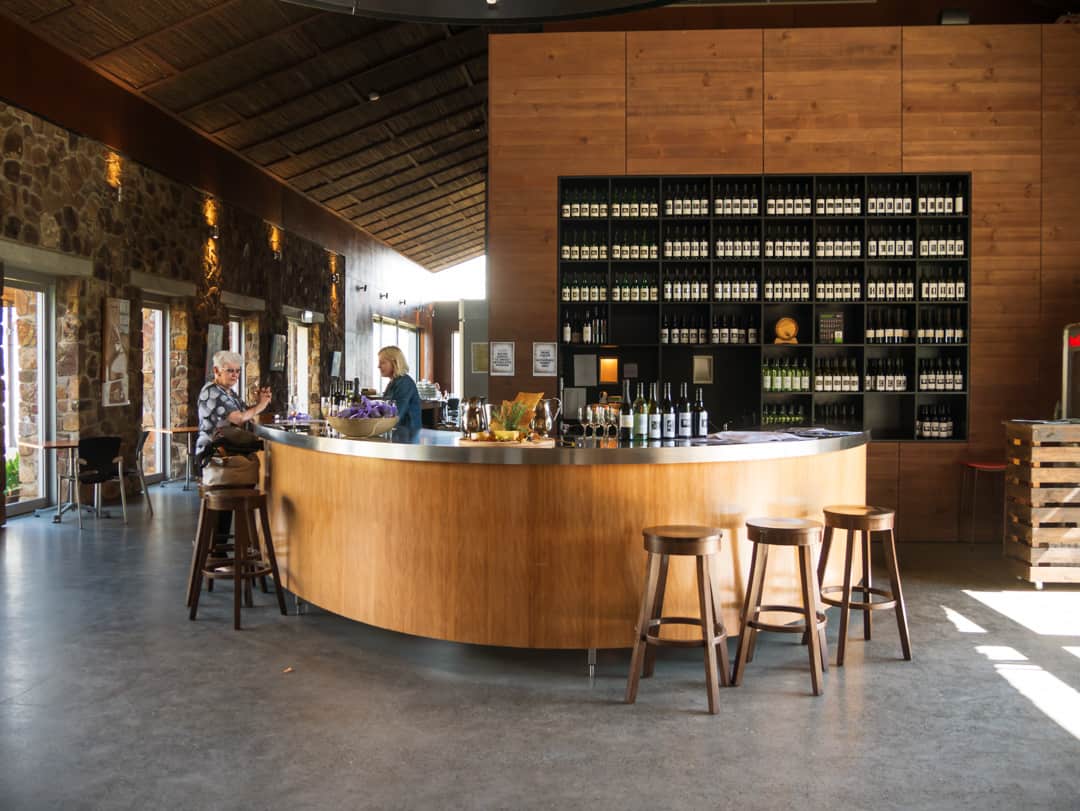 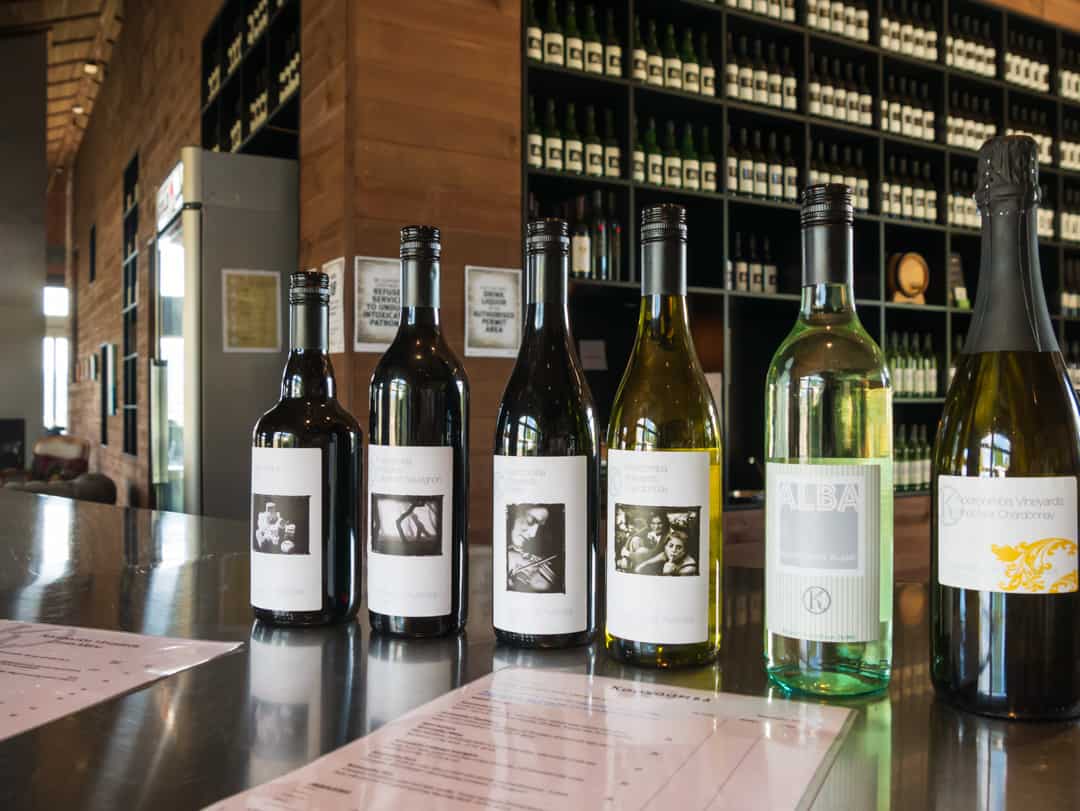 If you want to heighten the wine tasting experience you can order a cheese board or a charcuterie platter.  It’s all very civilised out here. 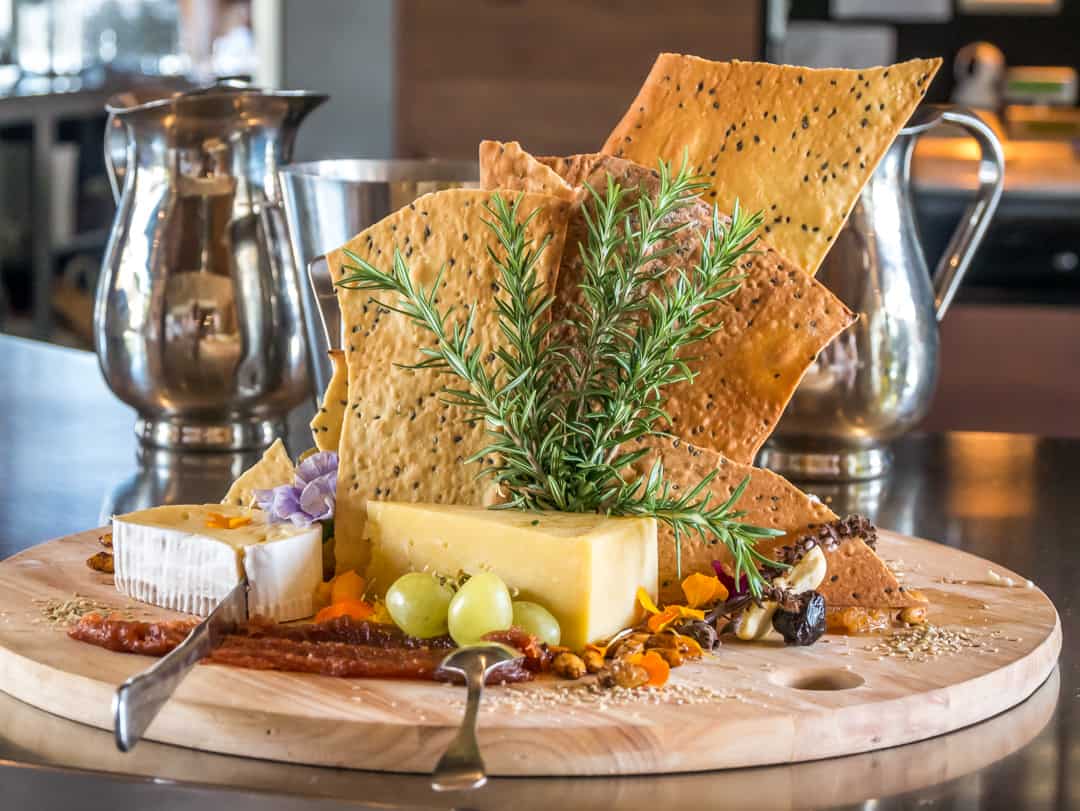 Kooroomba is also now a very popular location for weddings, with a floating floor chapel built out on the lavender fields. 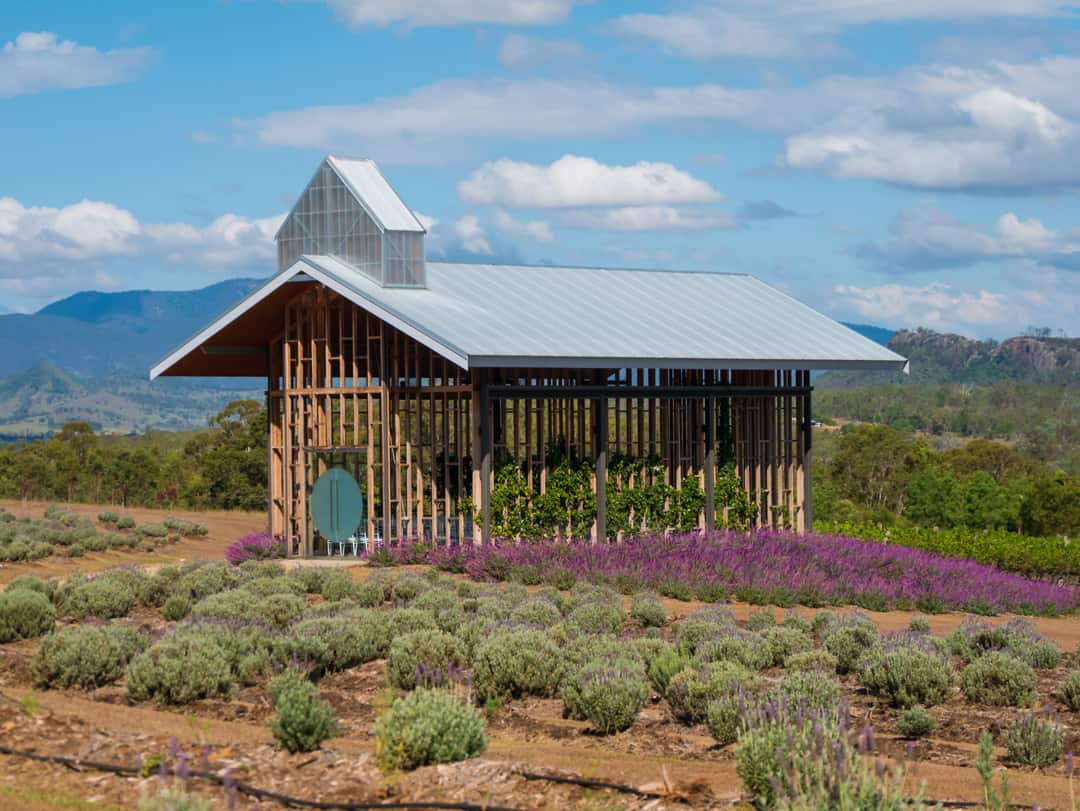 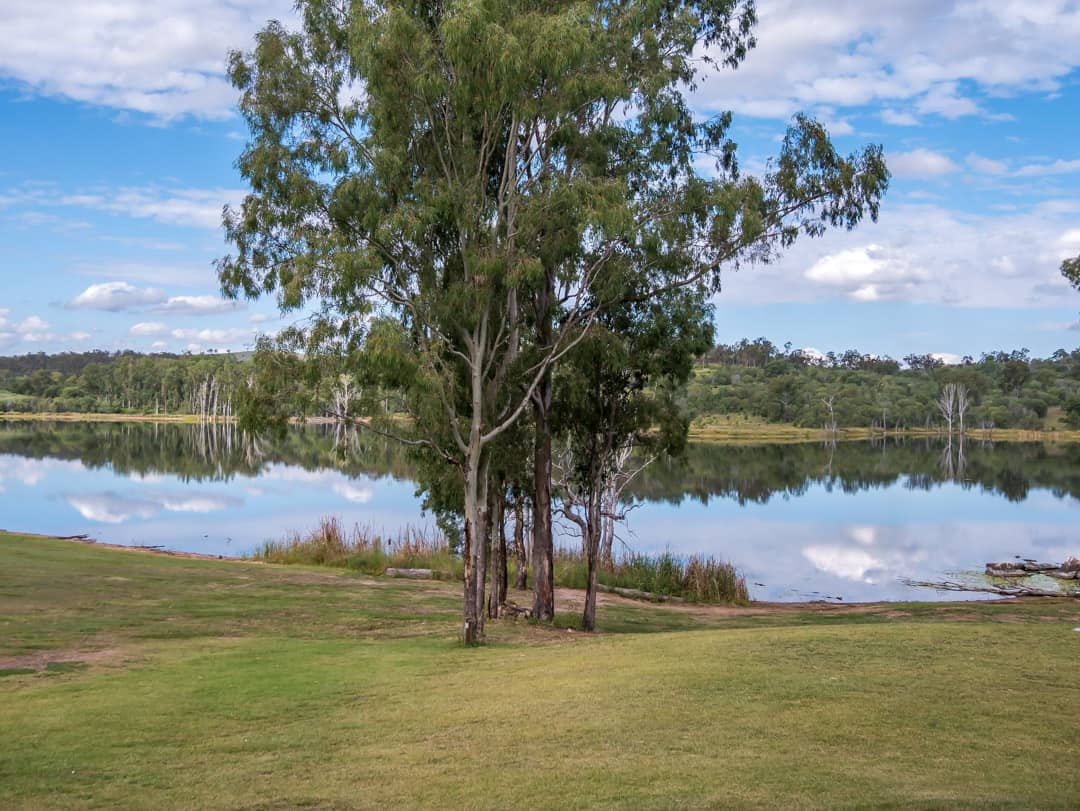 View from the deck of Overflow Estate

The Overflow vineyard also has a stunning outlook, overlooking Teviot Brook, part of the Wyaralong Dam.  The vineyard has been built from the ground up, with the rootstock for the vineyard being planted in 2012.  Australians love wine but there are a few varieties that are known by the everyday drinker.  Here at Overflow, they’ve chosen to feature some of the lesser known varieties like Vermentino, Tempranillo, Fiamo and Montepulciano.  Their origins are robustly Mediterranean, making this land perfect for growing.

Take advantage of the beautiful outdoor space overlooking the dam to kick back with a glass, or bottle of your favourite Overflow wine.  Match it with a cheese platter or one of the tasty options from the grazing menu. 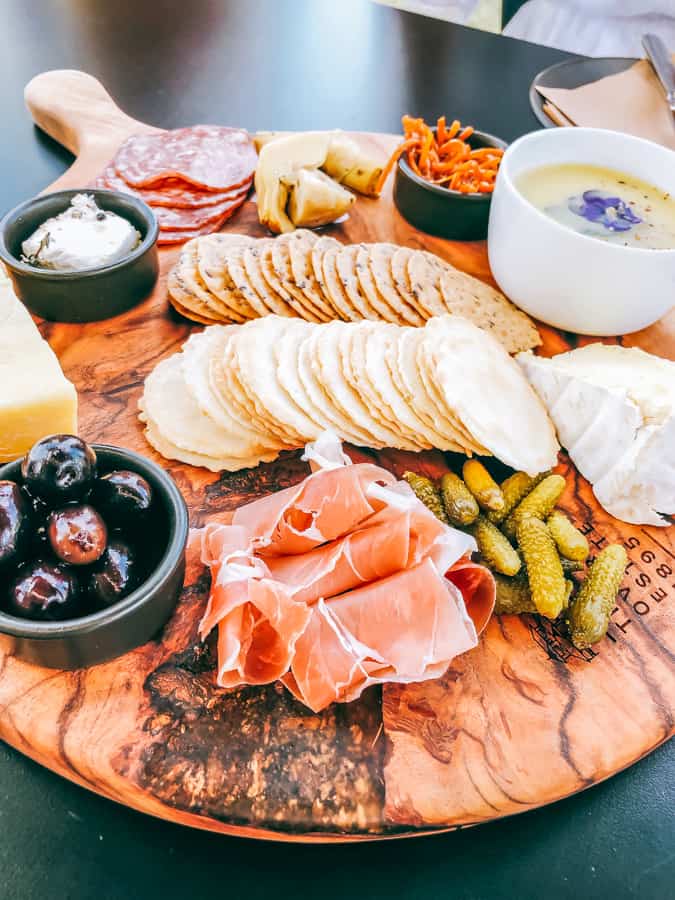 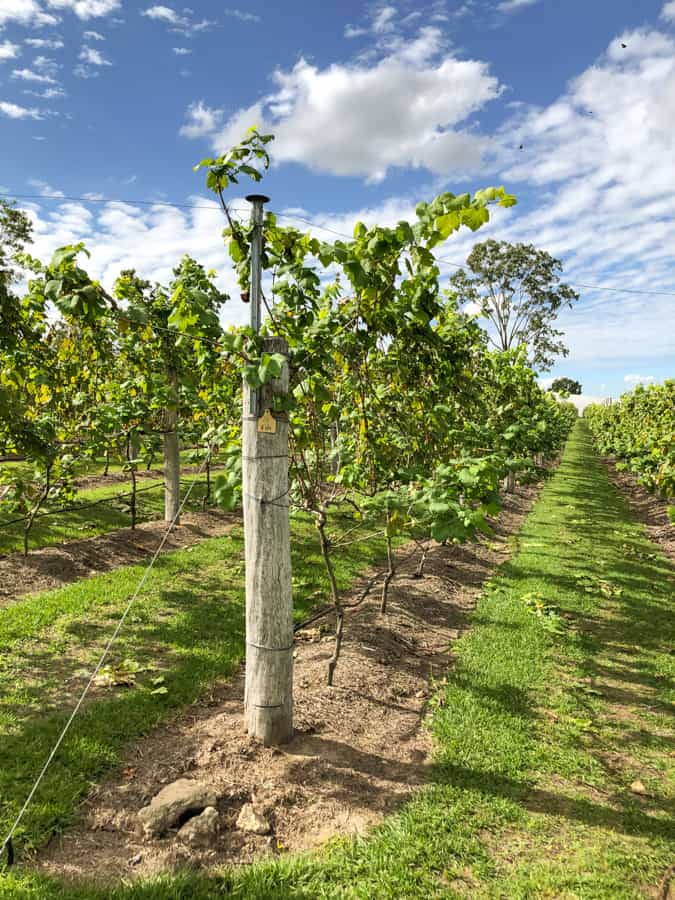 Milking sheep isn’t an easy task, especially when each one only produces around 1.5 litres of milk per day.  That doesn’t stop the owner of the Towri Cheesery, Carolyn Davidson from loving her sheep.  Within a few hours of the sheep being milked, it has made its way into the cheese room and been processed into cheese.  There are plenty of reasons to love sheep milk and its value-added products of cheese and yoghurt.

Sheep milk doesn’t leave an oily residue for one, but it’s also very good for people who have issues with the proteins and lactose in cow’s milk.  It has more solids and is only lightly pasteurised here.  Carolyn has owned Towri since 1988 and has been making cheese here since 2004.  Annually, she produces around two tonnes of cheese!

Tours of the farm and tastings are conducted at the farm once a week.  There’s also a wonderful spot for having a cup of tea and tucking into some of the excellent sheep milk products. 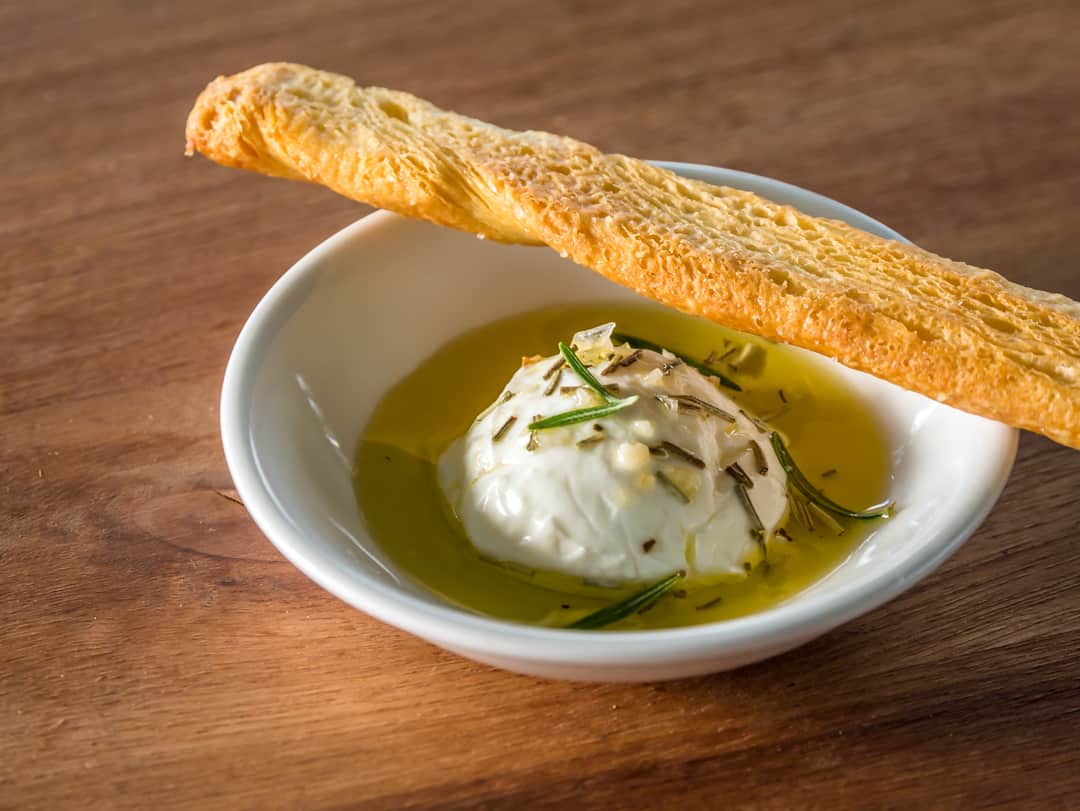 Where to stay in Brisbane

Unless you are planning to stay out in the Scenic Rim for a few days, it is best to find somewhere to stay in Brisbane.  The Brisbane CBD is one of the best places to stay in Brisbane as it is central and has public transport.  You can also hire cars from here and is the perfect starting point for Brisbane day trips.

How to get to Brisbane

Various commercial bus lines include Brisbane in their route.

Australia is one of the most popular countries for doing road trips.  Major highways connect Brisbane to the eastern seaboard capital cities and other rural and regional locations.