Skip to content
Home > Destinations > Europe > Belgium > Dinant :things to see and do in 24 hours

We left the town of Bastogne behind us, and we continued to rattle and bump our way along the appalling southern Belgian roads.  By the time we arrived in Dinant, the first of many beautiful Belgian towns we visited, I think the milk had turned into cheese, the eggs were scrambled and the wine was now sparkling!

As beautiful as the big cities in Belgium are, this is a country where the experience is made all the richer for getting in amongst everything in the smaller towns.  Many of them are particularly under-rated, and I can only imagine that in years to come, they will start to shine on their own.

As the horrendous roads gave way to something a little less rocky, we were faced with a gigantic rock, that from a distance looked as though we would never get through.

This was the Rocher Bayard.  As legend has it, the Bayard was a magic horse and the formation was said to have been split by the Bayard’s hooves.  Whatever the reason, however, it got there, it is a spectacular entrance to the city.

But, back to my previous comment about width.  We were driving a motorhome after all, and anything like this puts up our radar instantly.  Will we be able to fit through it?  The road sign suggested we would, but when it gets this narrow, nothing beats a personal observation and assessment of whether the vehicle will fit through.

Whilst we didn’t have too much clearance, it was enough to pass through safely.

Where to stay in Dinant

Dinant was the first time we didn’t have some kind of plan for where to stay the night.

There were no campgrounds to speak of that were open. The great thing about Belgium is that they love driving around in their motorhomes, so they are incredibly supportive and welcoming of them being in their towns.  This extends to staying overnight.  In Belgium, motorhomes (or camping cars as they are often called) can stay on the side of the road, or in public carparks for 24 hours, free of charge. (unless signed otherwise)

And so, a generous sized public car park just on the edge of the city became our home for the night.  We parked up next to some cars that looked like they hadn’t moved for a while, such was the depth of red and yellow leaves piling up all over their windscreens.  We figured we wouldn’t be disturbing them tonight.

As is the routine for us every night, the window shades go up, blocking out the outside world.  The acoustics of the motorhome means that each night we are transported quite easily into our own world, away from everyone and everything that continues to move outside our walls.

Alternatively, search on Trip Advisor for hotel reviews, pricing and availability in the town.

Best things to see and do in Dinant

Have coffee by the River Meuse

The River Meuse runs through Dinant and has been a strategically important lifeline to Dinant and many of the other towns that it passes through, particularly during the World Wars.  It is also an important part of the transportation and commercial trading network.

We sat in Boulangerie Kempinaire, watching the locals throw their line into the river, hoping to catch something to take home as a reward for their early morning efforts in the cold. We also marvelled at the incredible churches built high on the river banks, and the Citadel, perched even higher on the rock that dominates the city.

Oh, and the chocolate chaud, coffee and croissant that we devoured wasn’t too bad either!  It never ceases to amaze me how these scrumptious pastries are sold for such a low price, considering how much effort goes into making them.  If we didn’t have other things to do I’m quite sure I would have been tempted by the amazing range of fresh cakes on offer in the window.  Instead, I had to be satisfied watching the locals come in and spirit away their favourites, packaged ever so delicately in their own special box.

Walk along the River Meuse

I didn’t realise that Belgium was home to so many underground caves.  So many that’s it’s hard to decide which one is best.  Reviews of all of them abound on the internet, so it’s really just a decision to be made based on where you are likely to be, and if there are any specific features that one cave has over another.

Considered one of the most beautiful caves of Belgium, La Merveilleuse were discovered in 1904 and opened to the public in 1905.

The caves can only be accessed via a guided tour.  For accurate details and pricing visit the Caves of Dinant website.

We walked from the river to the caves, located on the left bank. Or for those who get a little confused sometimes with direction (like me), it’s on the opposite side of the river to the Citadel.  The walk is about 1.5km, up a slight incline.  We didn’t mind the walk as we had time to get there, with the tours starting every hour on the hour.

As we waited outside for the tour to start, I suddenly realised that I had the most ridiculous shoes on for such an outing.  When my husband and I engaged in a conversation about him wearing his hiking shoes, my brain must have gone on a holiday instead of thinking about my own situation.  Now, here I sat in knee-high boots.  Oh well, at least they were flat.  But for someone like me who always finds it amazing that people wear shoes that are inappropriate for the purpose, I had failed badly.

On the stroke of midday, our multi-lingual tour guide opened the door to let his previous tour escape, and to get ours on its way.  The groups are deliberately kept small so that they are manageable.  Our guide today told the story of the caves in three languages – English, French, and German.  The tours are also available in Dutch.

You can smell the damp as soon as you enter the caves, but it’s not a bad smell, just a sign that you are now underground.  It’s not cold though, although we are dressed a little warmly.  Like any underground cave, the temperature is always constant.  Here they are around 12 degrees Celsius.

The sound of water dripping is evident too, but that’s the only sound you will hear down here, apart from the humans who are cautiously following the guide around the wet areas underfoot.  It’s not dangerous, but it’s still necessary to take care where you place each step.

It’s pretty amazing down here.  Frozen waterfalls, the end result of water constantly dripping, now clinging forever to the rock face.  Ice stalactites and stalagmites have formed everywhere, glistening white in the glow of the torch.  And then, we are told, if we use our imagination, we can see Buddha, elephants and even children’s faces in the rock.  Whilst some require a lot of imagination, and maybe a glass of champagne 🙂 to see them, I can clearly make out the Buddha and a baby face.

These caves are also home to a rare geological feature.  Under normal conditions, and over a long period of time, stalagmites and stalactites may join, forming a column.  In the rare event that a stalactite slightly moves away from being perpendicular(usually as a result of wind), it will not meet up with the stalagmite below.  The result is an oblique stalactite and is one of the main highlights of these caves.

These caves also played an important role in World War Two, with many of the town’s people taking shelter here in one of the long tunnels.

Accessible down to 30m, the tour starts at the top and winds it’s way down until the exit at the bottom of the caves.  There is plenty of time to take photos and to soak up the atmosphere of being so far underground.  Unlike the times when I have been underground in mining tunnels, these caves are open, clean and airy.  It never once felt claustrophobic or unsafe.

For anyone visiting the caves, it is quite easy to get around, but there are quite a few stairs, including the final set of 120 steps en route to the exit.  I did survive in my knee-high boots, however, it’s not something I would generally recommend.  Good walking shoes, with good grip, would probably be the most sensible option.

I knew so little about Dinant before I arrived that the number of saxophones in the town had me wondering what on earth was going on.  Did they love music?  Did they have famous musicians here?  Almost every corner, the Pont Charles de Gaulle, the backstreets, the squares, had saxophones standing proudly (and a little loudly).

I soon learned that Adolphe Sax was born in Dinant in 1814.  After following his family into music, he later invented the saxophone in 1846.  He may have only lived in Dinant for a year but the locals have taken clear possession of their links to him and celebrate it to the fullest.

Check out the Collegiate Church of Notre Dame

This church, with its enormous internal buttresses, was built in the 12th century but later suffered enormous damage.  It was rebuilt in the Gothic style, which is prevalent throughout Belgium.

The Citadel sits high up on the edge of the mountain, overlooking the Collegiate Church of Notre Dame, the River Meuse and the city itself.  Having been a fortress of some kind since 1051, the current building was built between 1818 and 1821.  A set of 408 steps links the ground level beside the church to the top of the mountain.  You can walk the steps or for the same price, you can catch the cable car to the top.  Unless you are wanting the exercise (which is always a good idea when travelling), the decision is a no-brainer.

A tour can be taken here. The entrance ticket you pay to get here covers the cost of the tour.  You can also drive up the mountain.  There is plenty of free parking at the top, a coffee shop and a military cemetery containing 1200 French war graves.  Even if you don’t do the tour, the view from 100 metres up is spectacular.

Where to drink in Dinant

After a huge day and plenty of walking, it was time once more to drink from the local vats!  There are a number of places to choose from, but the cafes with the best outlook are right next to the church.

Sitting at La Citadelle Bar, right alongside the church, we sat outside, even though it was cool, as for the first time all day, the sun was actually shining.

We couldn’t go past at least one glass of Leffe, given its connection to the town.  Leffe was an Abbey brewed beer, still made today from a recipe developed in the 1200s.  Today, the brewery no longer exists, but the beer is still very popular. 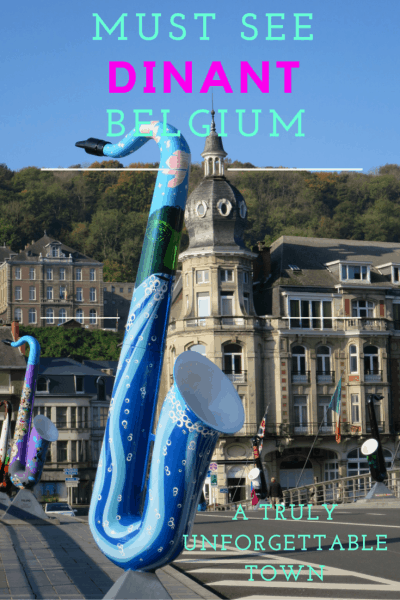