Melbourne’s Laneways are a must do on any visit to Melbourne.  In Melbourne’s grid-like inner city streetscape, these little laneways bring colour, hustle and bustle to the city.  Whether they be full of great cafes and restaurants, uber-cool bars, luxury shopping or edgy street art, they are all worth a visit.

Here’s a list of where you can find some of them.  But, be warned, this is only a snapshot of all the Melbourne laneways that exist.

I’ve also provided their locations and a Melbourne laneways map showing where they can be found.  One of the comments I hear the most when people are talking about the Melbourne laneways is that they either couldn’t find them (some aren’t actually available on mapping tools), or they didn’t know any of them actually existed.  Hopefully, these details will make them a little easier for you to find.

Once you have finished exploring Melbourne’s laneways, there is plenty more to do.  Here’s a 48-hour itinerary of things to do in Melbourne.

Following a passionate two year fight by family and fans, this laneway was finally renamed to Amphlett Lane in 2015.  It is a perpetual dedication to one of Australia’s finest rock chicks, Chrissie Amphlett, lead singer of The Divinyls.  The iconic wall paintings here are instantly recognisable to those who grew up listening to her music.

Location:  Amphlett Lane is not currently recognised by Google Maps.  It is tucked just behind the corner of Little Bourke and Spring St.

This bright, bold laneway is right in the centre of the city, jutting off the Bourke St Mall. It was one of the first laneways used as part of the Street Art Project that has now wound its way across much of the city.  It’s one of my favourites!

Location:  Runs between Bourke Street and Little Collins St in the block bordered by Elizabeth and Swanston St.

Another awesome lane and easily Melbourne’s best known.  It’s rare to come here and find it completely empty, whatever the time of day or night.  There’s always a photographer somewhere, taking different angles, looking for what’s new.  The foodies also come here for another well known Melbourne institution.  Movida and Movida Next Door are two spanish tapas restaurants.  The queues are normally long, so the street art keeps everyone entertained.

There’s the Good2Go Cafe, providing coffee and profits to a local charity assisting with homelessness.  And, there’s Misty, a bar which draws the late night crowds.

There’s street art of all kinds here and I won’t even try to give you an accurate name of it all.  I just loved looking at the different murals, logos, political messages, even painted shows stuck on the outside of a building.

Location:  Off Flinders Street, in the block bordered by Russell and Swanston St.

If you’ve found Hosier Lane, then you’ve also found Rutledge Lane.   Rutledge Lane amps up the grunge by painting the bins, the stairwells and the side of an old above ground parking garage.

As a regular visitor to Melbourne, this lane has long been on my list of favourite phang outo hangout.  This is one of the foodie havens in this great city.  Here you will find wall to wall cafes and outdoor seating.  It gets really busy during lunch and at night.  Unfortunately, there’s also quite a bit of touting going on, but as long as you take it in good fun, it shouldn’t bother you too much.  Italian fare is quite popular along this strip.

Location: Runs between Flinders Lane and Flinders St in the block bordered by Elizabeth and Swanston St.

AC/DC is a large part of Australian rock culture, and they are celebrated here in AC/DC Lane.  It’s wall murals are a fitting tribute to these rock legends.

Location:  Located off Flinders St in the block bordered by Russell and Exhibition St.

This small, dead-end alley honours one of Melbourne’s most loved comedy characters, Dame Edna Everage.  There’s not too much to look at here, save for a few “Hollywood” stars on the ground.

Location: Off Block Place, in between Collins and Little Collins St, in the block bordered by Elizabeth and Swanston St.

Small bars and great restaurants are the go-to places in this daggy laneway.  My favourite is the Argentinian restaurant, San Telmo.

Location: Located off Bourke St, in the block bordered by Exhibition and Spring St.

The Royal Arcade is as far away from the street art scene as you can possibly imagine.  Still set in yesteryear, people come here to shop at some luxurious establishments and to admire the beautiful interior.

With its glass ceiling and tunnel-like arcade, it has striking similarities to the passages in Paris.  Mythical creatures Gog and Magog guard the clock that still chimes every hour.

Location:  Connects the Bourke St Mall to Little Collins St, in the block bordered by Swanston and Elizabeth St.

The Block Arcade is simply stunning and built in the same vintage as the Royal Arcade.  There’s plenty of casual eating spots here, all offering excellent lunchtime deals.

In the glass-domed arcade, you’ll find Haigh’s, one of the best chocolate shops in Melbourne, and a must-visit for anyone new to the city.

Location:  A dead-end lane off Little Collins St, in the block bordered by Swanston and Elizabeth St.

Once upon a time, Hardware Lane was a rough part of town.  Today, it is similar to Degraves St. It’s full of great places to eat that won’t break the bank.  There’s also a number of groovy bars here as well and there’s always plenty of music at night.

Location:  This is a long lane and runs all the way from Little Lonsdale to Bourke St, in the block bordered by Queen and Elizabeth St.

I like this lane because it’s not on the usual lists for people to visit.  I also like it because it’s the home of cafe Shebeen, who gives 100% of their profits to charities that support the developing world.

Location: A dead-end lane off Collins St, in the block bordered by Elizabeth and Swanston St.

Another of the lesser known laneways, here you’ll find some healthy and vegetarian eats, usually away from the mad Melbourne lunchtime crowd.

Location: Off Little Collins, in the block bordered by Queen and Elizabeth St.

So there you have it, my list of some of the best Melbourne laneways.  If I could give you one tip it would be to map out your planned trail first.  Many of these laneways are close by, whereas others are further out.  to save you doubling up, it’s easier to have a clear idea first of where they all are.

Coming to Melbourne and want to explore the city more?  Check out these great resources. 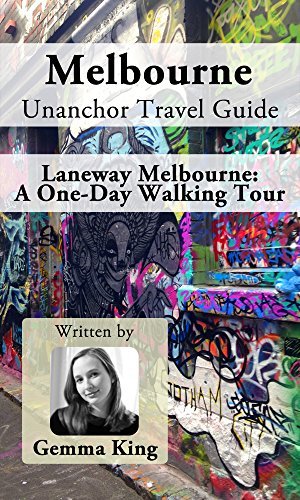 96 thoughts on “Exploring Melbourne’s Laneways: 13 of the best laneways in Melbourne Australia”