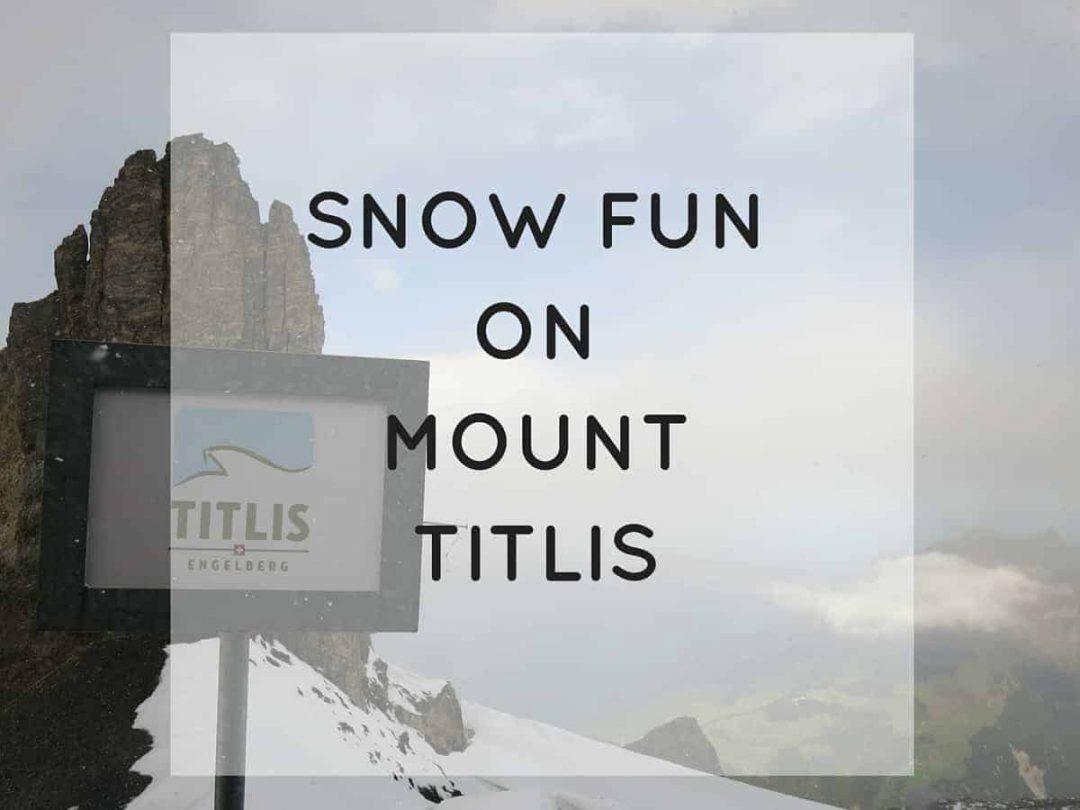 We couldn’t come to Lucerne and be so close to real Alps snow and leave without visiting it.  We had discovered yesterday that Mount Titlis, the highest mountain in central Switzerland, was only about a 30 minute drive away from Lucerne.  Mount Titlis, or Titlis as it is more commonly referred to, has snow all year round.  It just sounded all too amazing to let it pass us by.

We are not big skiers by any stretch of the imagination.  But, to people who come from and live in a hot climate, where it never, ever snows,  it has a kind of luring effect on us.

There are plenty of activities for everyone up there as well.

How to get there

The town at the base of Mount Titlis is Engelberg.

Can you drive here in a motorhome ?

Of course you can!   Our motorhome has been on quite a journey with us, and she’s been in some very interesting places.  There aren’t too many places that she can’t go (within reason)  But, today was one of the days when she would just have to be happy parked up in a regular carpark, hanging out with some other vehicles.  She might be able to climb some mountains, but not this one.

There are a number of large carparks at the base of the mountain, near the entrance point for Mount Titlis.

Two of these are for tour buses only.  Don’t do what we did and head on in, thinking that motorhomes could also park here (as is often the case on open air parks).  The boom gate is controlled by a card swipe system for the buses.  We couldn’t get in, and then very quickly couldn’t get out, because two buses had lined up behind us.  Both of them had to backup to let us out which I guess they were less than impressed with.

Closeby there is a carpark for cars, which we parked in over several bays.  It only cost SFR5  for the whole day which was more than reasonable.

How much does it cost?

It’s not a cheap exercise but seriously, how often do we get to do this.  As a way of justifying similar expenditure, back home we have some theme parks that cost $AUD100 for a day, so this is on a par and therefore not extreme in our mind.

The entrance fee covers almost all activities and you can stay from the time it opens to the last cable car ride back if you want to.

You can pay in SFR or Euros.

They will also allow you to pay for your parking ticket here.  This saves having to queue at the machine on the way out.  In summer, the queues build up substantially.

A funicular ride and two gondolas get you up most of the way.  Then the Rotair 360 takes you on the final journey.  It’s a steep climb!

There are restaurants/cafes/bars to take respite from the cold and knock back a warm drink or warm cider.  I’m used to drinking cider ice cold but I don’t live in sub -zero temperatures either.  There’s something oddly refreshing about drinking warm cider on the edge of a mountain that is covered in snow.

Ice flyer – This is a larger chairlift that takes you out over the snow and the natural glaciers.  It’s an awesome experience that you don’t get from the normal gondolas that get you to the top.  It’s also possible to ride in the open air as well which adds to the experience.

Glacier Cave – This is a real glacier cave that has been built around to provide easy access to visitors, without having to take helicopters to the top of a mountain, or to have to climb one.  It is 150 metres in length and about 20 metres below the surface of the actual glacier.  It’s blue inside which is due to the light reflecting off the ice and it maintains a temperature of around -1.5 degrees celcius. 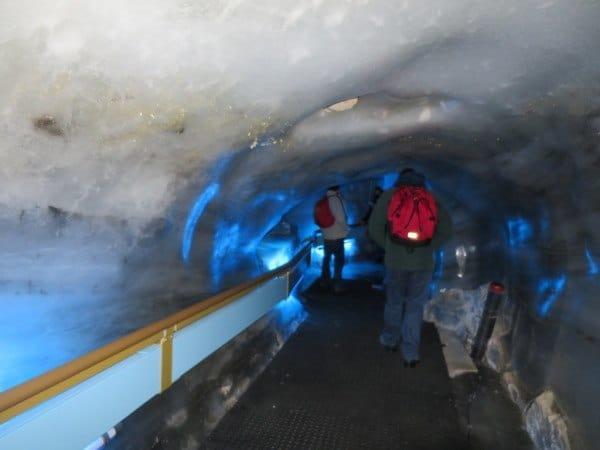 Sledding – On the way to the Ice Flyer is an area where you can pick yourself up a sled and go speeding down a hill and up the embankment on the other end.  Just be careful you don’t go too fast and land on your head! 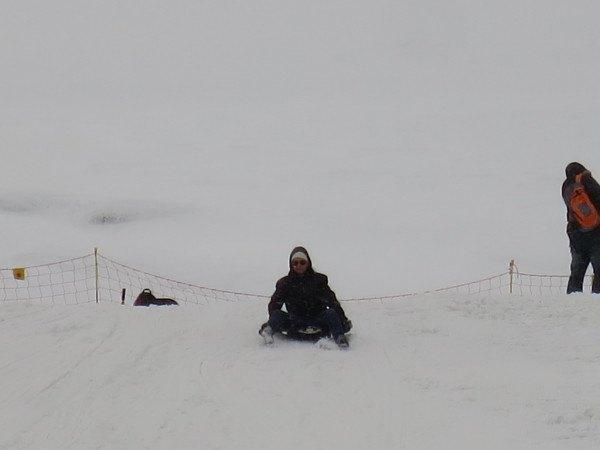 Chain suspension bridge –  This is Europe’s highest suspension bridge which is scary enough, but when it’s howling wind and snow, it’s even scarier for some.  It’s 3,041 metres above sea level and 500 metres off the ground. 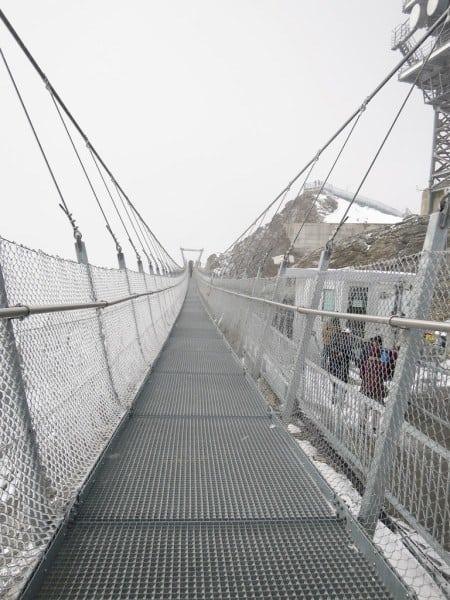 If you want to go on the Ice Flyer but the person at the main ticket booth on the ground won’t sell you one because of possible inclement weather, make this your first stop once you get to the top.  If the weather is going to turn, your best bet to see anything is to go before that weather closes in.  We did this and about an hour later, the Ice Flyer was closed.

Go early, especially if you are going in summer.  The queues can be long to get on the funicular and it seems that people don’t know how to queue properly making it a bit of a crush at times.

Wear warm clothes and good shoes.  It’s the snow and it’s below zero a lot of the time with blizzard conditions.  You don’t need snow gear but if you have it all the better.

Rotair  360 – get on the window, any window.  The whole cabin rotates 360 degrees so you will get a great view.

If you can get on the funicular carriage last, you will be ensured a view at least out the side window near the door.  Getting on first obviously allows you to get to the front.

If your budget allows, go to the a la carte restaurant and order the traditional Swiss meal of  sausage and potato roesti.  It’s not expensive (just more than some of the other eating places here).  The other cafes are more self service, buffet style with more mainstream and less interesting meals.  You will also get an awesome view of the mountain.

The drive to Engelberg is quintessential Switzerland.  It’s what story books are made of.  And postcards.  Everything is neat and orderly, as though everyone is living with some OCD tendencies.  The hills are soft, rolling and bright green.  The chalets are dark timber, with many windows, usually framed with gorgeous bright flowers.  There are cows everywhere!  There are wood piles.  Some of them are bigger than the houses.  Parachuters jump out of planes and land in the fields. 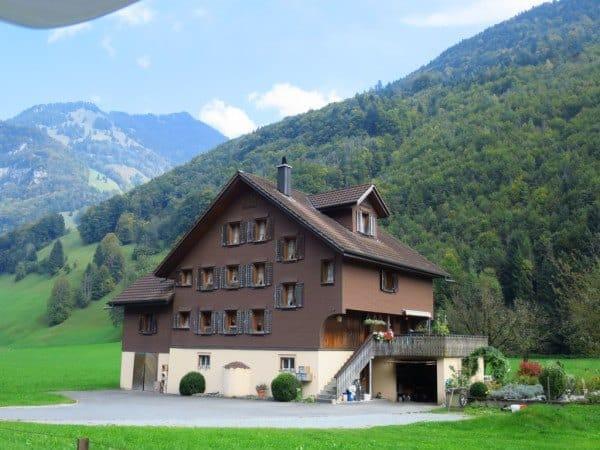 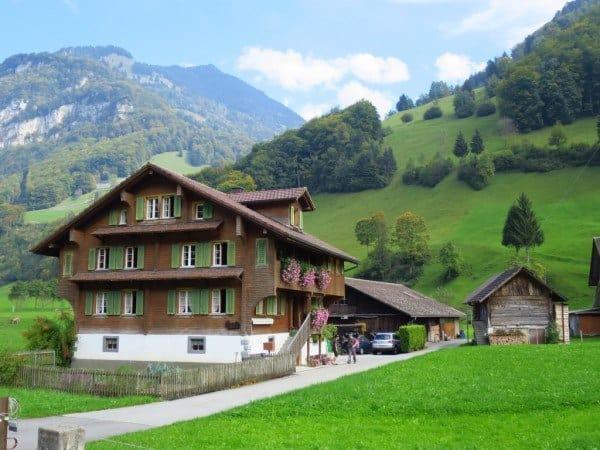 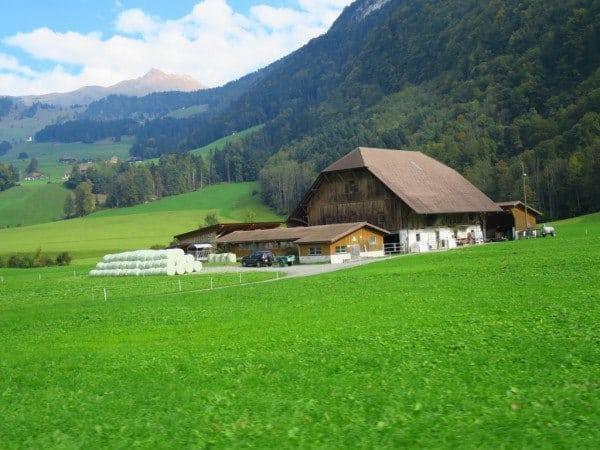 As we were making our way to Engelberg, the traffic came to a complete standstill.  All we could hear were bells.  We weren’t at all sure where they were coming from.  All of a sudden I saw something up ahead.  Cows.  Heaps of cows.  It was the annual parade, where alpine farmers bring down their herds from alpine pastures.

It was incredible as we sat and watched the cows, all dressed up in traditional Engelberg colours and costumes.  This was the one day of the year that this occurred and we had been lucky enough to witness it, without even knowing it was going to happen.  These are those wonderful moments of travelling. 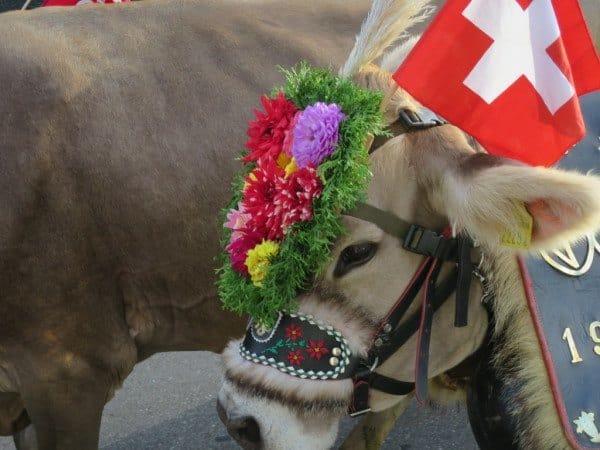 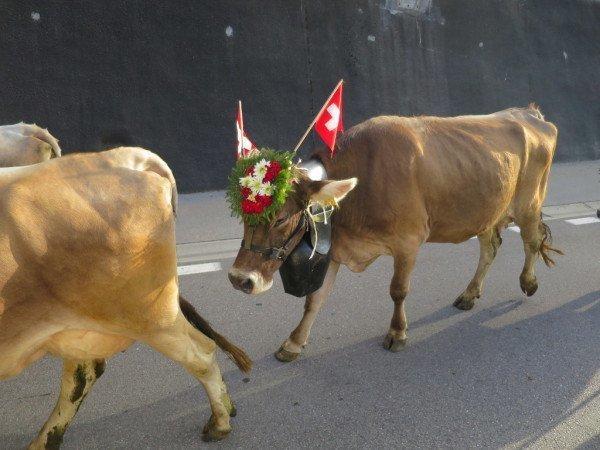 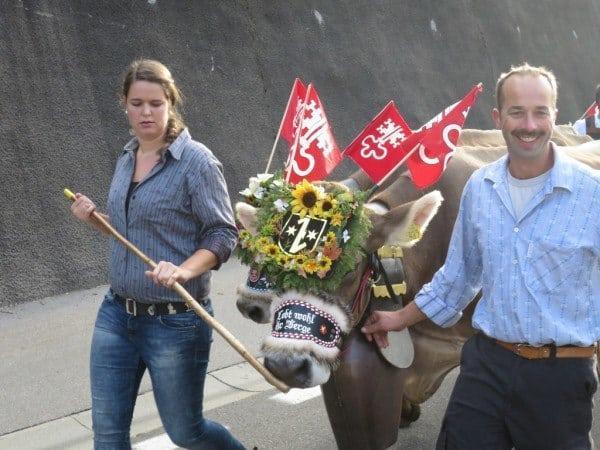 As for the rest of what we did up here, the photos will tell the story. 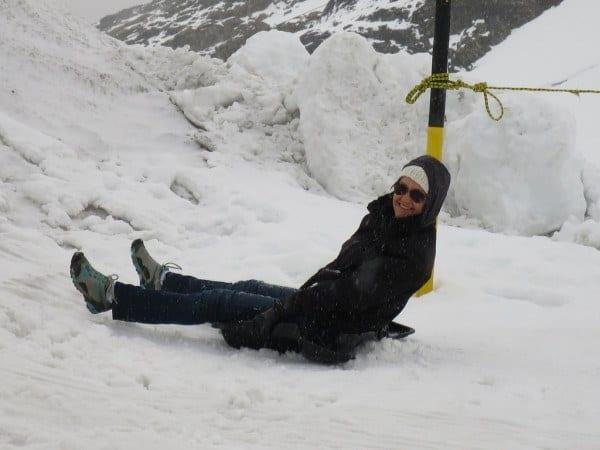 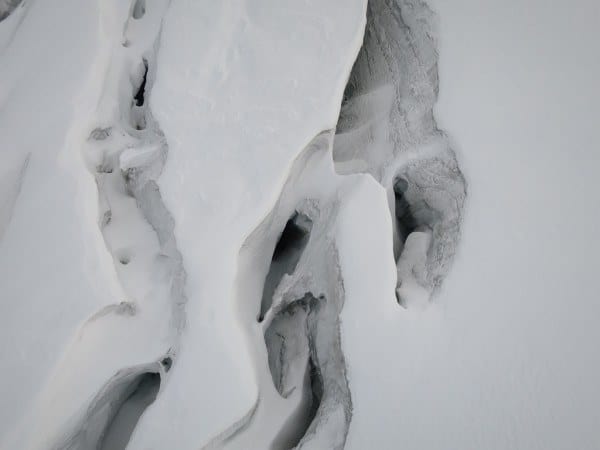 Looking to head to the snow?  Why not pin this for later.

6 thoughts on “Fun in the snow on Mount Titlis Switzerland”