It’s worth the effort

Making French bouillabaisse from scratch is not a quick thing to do, but it’s something my husband has been wanting to do for a long time.  With many visits to France, we’ve really appreciated the regional variety of food there.

Galettes from Brittany and calvados and apple-inspired goodies from Normandy.  Champagne, from the Champagne region of course, and lemons and olives from Provence.  The list goes on with each region having their own local specialities that are often not found anywhere else in France.

The same can be said for French Bouillabaisse, found mostly in the southern parts of France in Provence. Predominantly however, it is the local favourite of Marseilles, the town built on a harbour in south western Provence.  Historically, the bouillabaisse was  made with a bony fish and traditional Provencal herbs and spices.  It was a large, hearty stew made for whole families to share.

Today, in many restaurants, the bouillabaisse is far fancier, but still follows the same basic framework of fish, shellfish, herbs and spices and the essential accompaniment rouille.

The first step for this French Bouillabaisse was shopping for the all important seafood.  We combined a trip out to Scarborough in Brisbane’s bayside to Morgan’s Seafood.  This business is legendary in these parts.  Many people buy their seafood direct off the trawlers that dock alongside Morgan’s.  It was such a glorious winter’s day that we decided to squeeze a little more out of our trip and eat some takeaway fish and chips in the park.

A little later, with a nice selection of fish and shellfish in our possession, it was time to head home and start cooking! 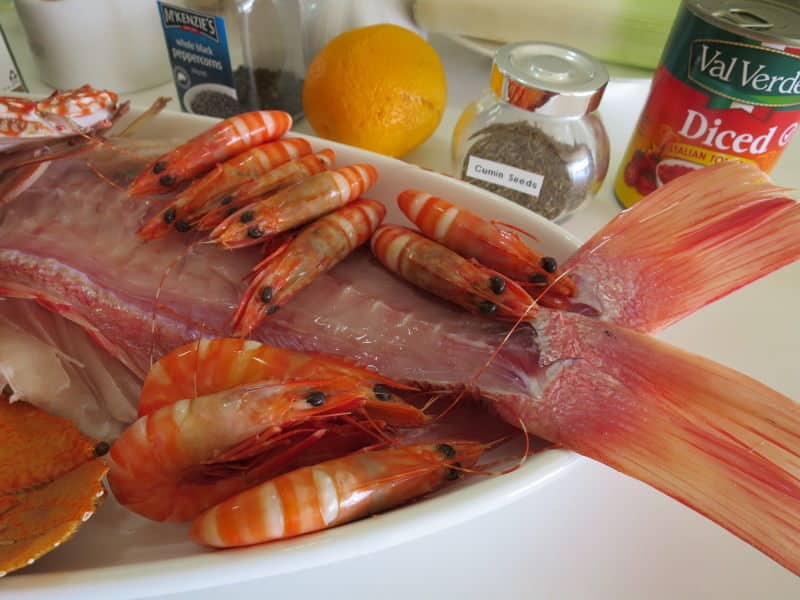 Surrounded by white fish fillets, Moreton Bay bugs, green lipped NZ mussels, tiger prawns and fish carcasses, the first job was to cut up the sandcrab into eight pieces and clean it out. 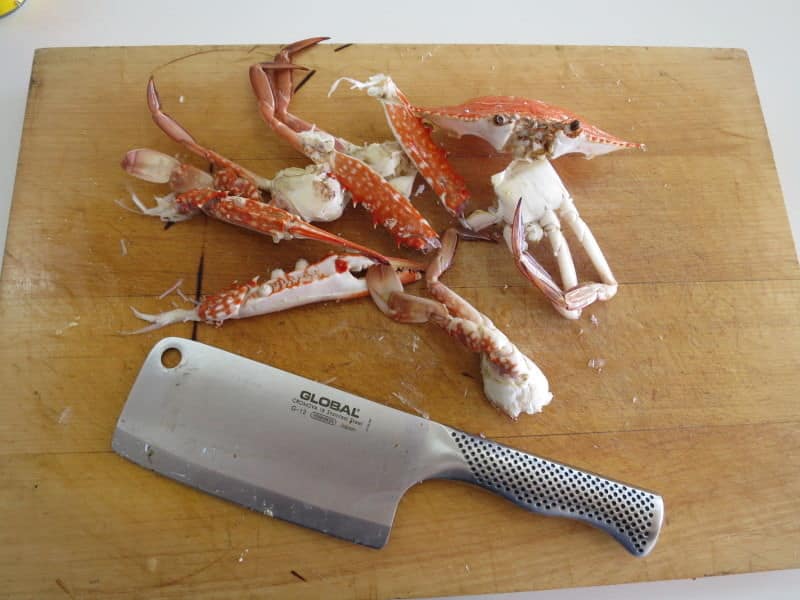 Into a pan went leek, garlic, onion and fennel and olive oil to cook down until soft. 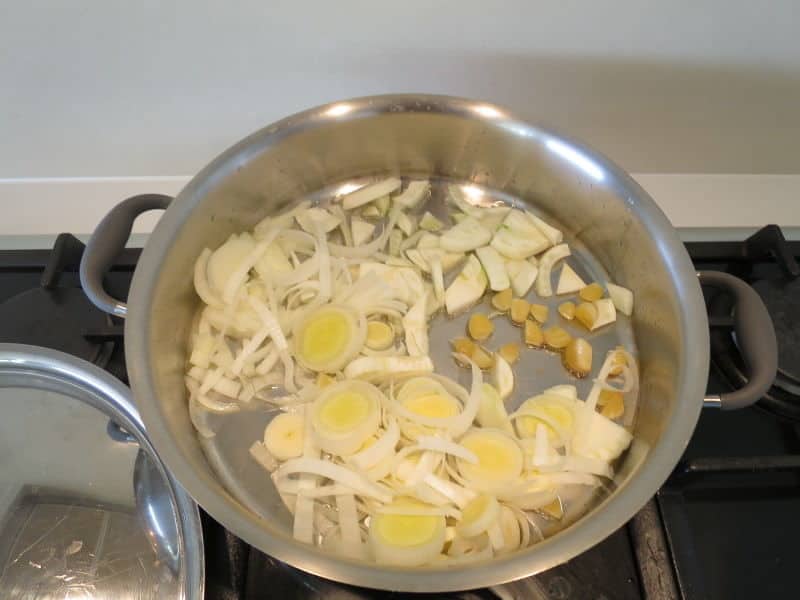 Next step was to add the herbs and spices to the pan.  This included: cumin seeds, star anise, thyme, bay leaf, black peppercorns, orange zest, tomato paste and tomatoes. 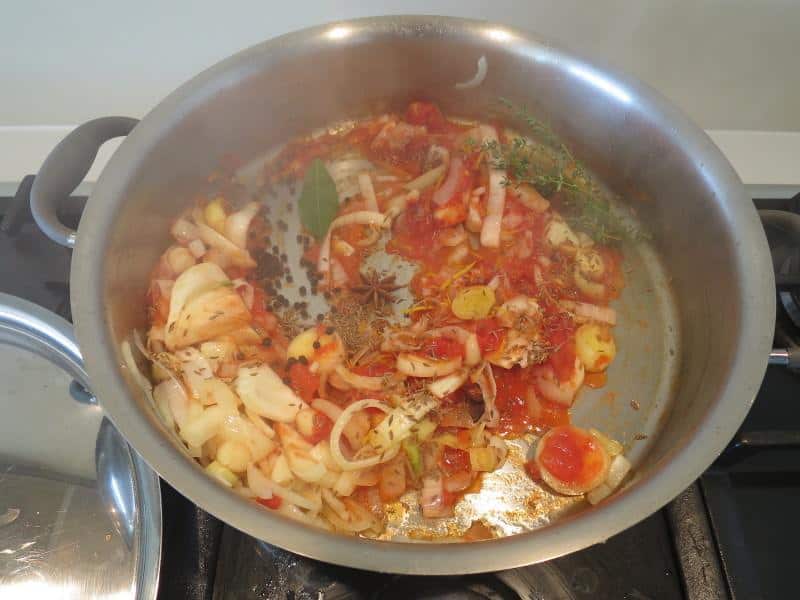 Next the crab was added and then the fish bones and white wine. 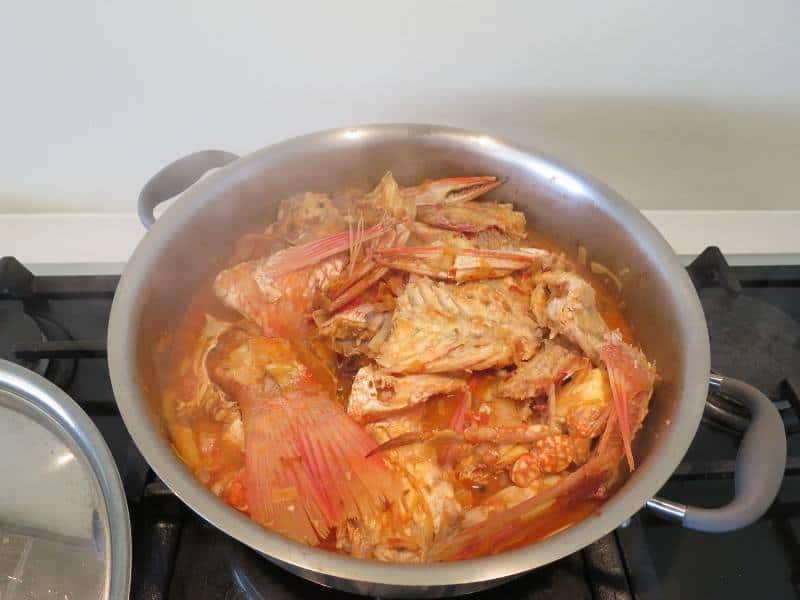 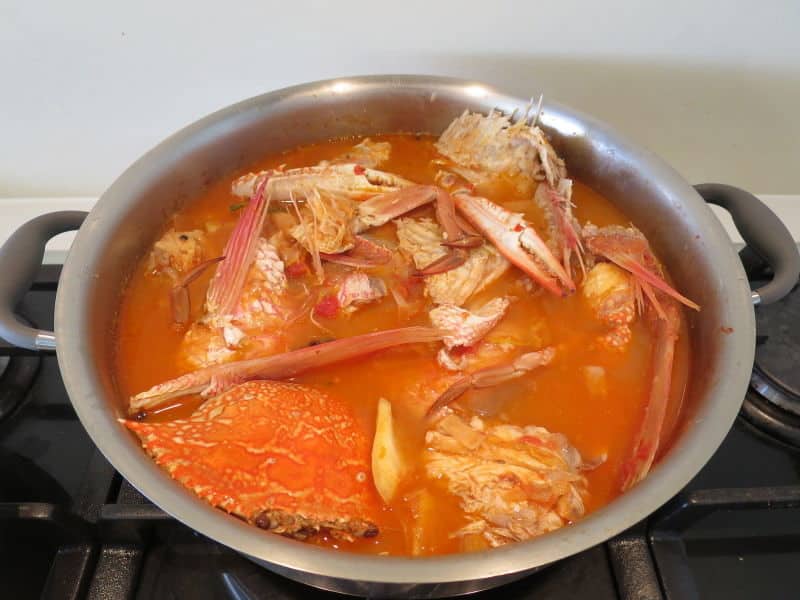 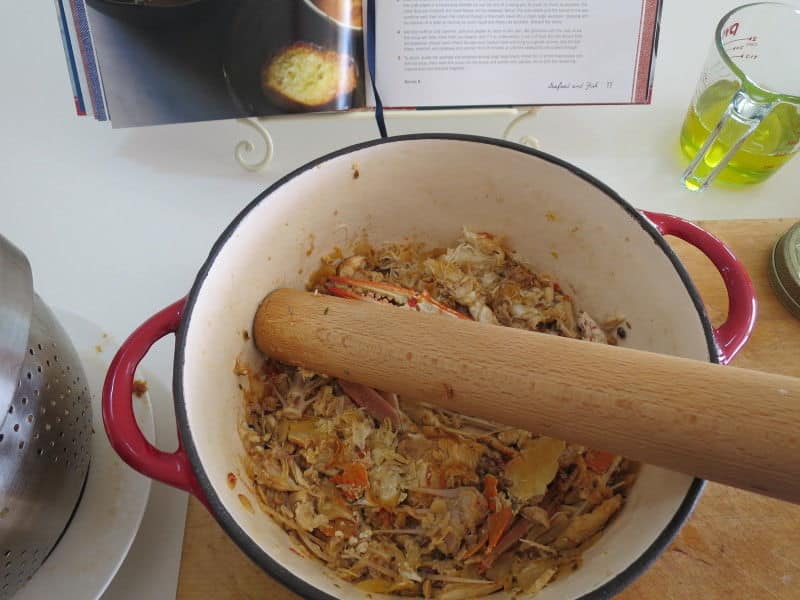 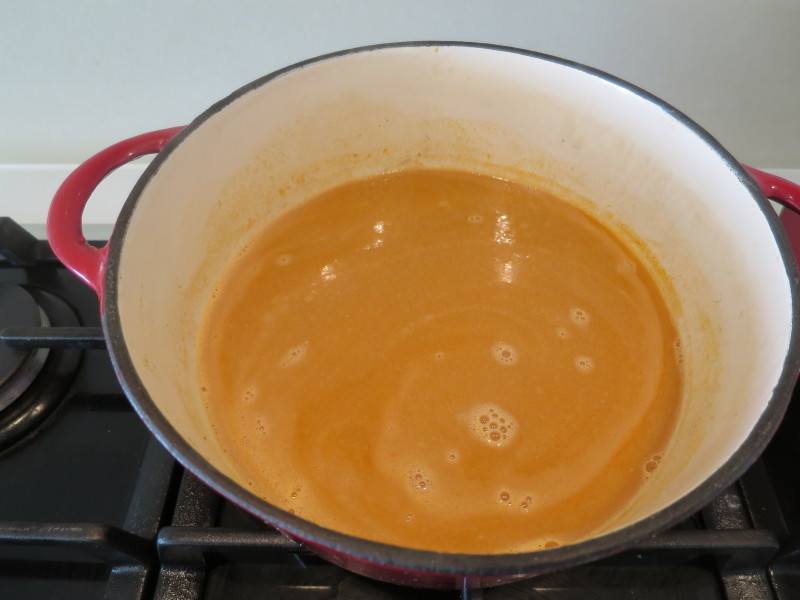 In what seems like a never ending process of “in and out” , the crushed bones are now placed back into the stock on the cooktop and combined well.  Once it has cooked a little more, it is sieved through fine mesh and/or muslin to prep the final liquid base for the dish.  All the crushed bone material was then discarded.

Saffron, cayenne pepper , salt and pepper were added to taste (note: the amount of salt you add will depend on how salty your seafood is).

With the broth made, it was now time to prepare the rouille. There are several ways of making this.  Our recipe used  garlic and roast capsicum as it’s ingredients.  It was blackened on the BBQ and then cooled, peeled, and blended with the garlic, egg yolks, saffron and lemon juice until smooth.  Oil was added last, drop by drop, to ensure the mixture was emulsified correctly. 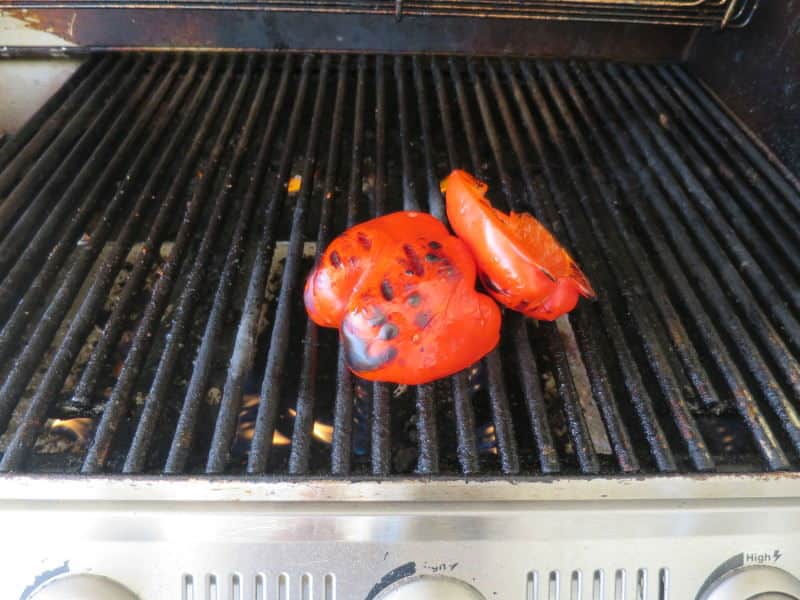 Now it was getting close to serving so it was time to add the fish fillets, shell fish and potatoes. (The potatoes were steamed separately until tender, then peeled and set aside before adding) Simmer until the seafood is just cooked through.

Pull out seafood once cooked and place in bowls ready to serve.   Just prior to serving, whisk a small amount of the rouille into the hot broth then ladle out broth over the cooked seafood. 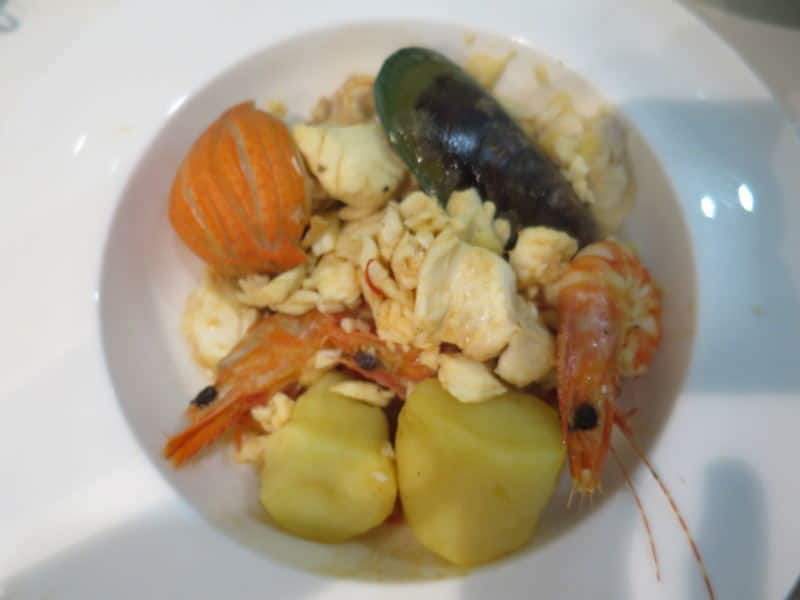 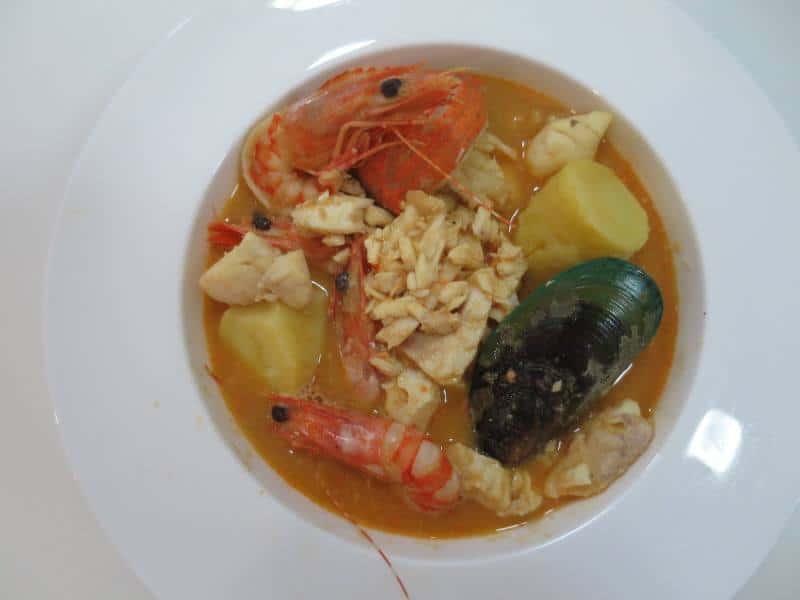 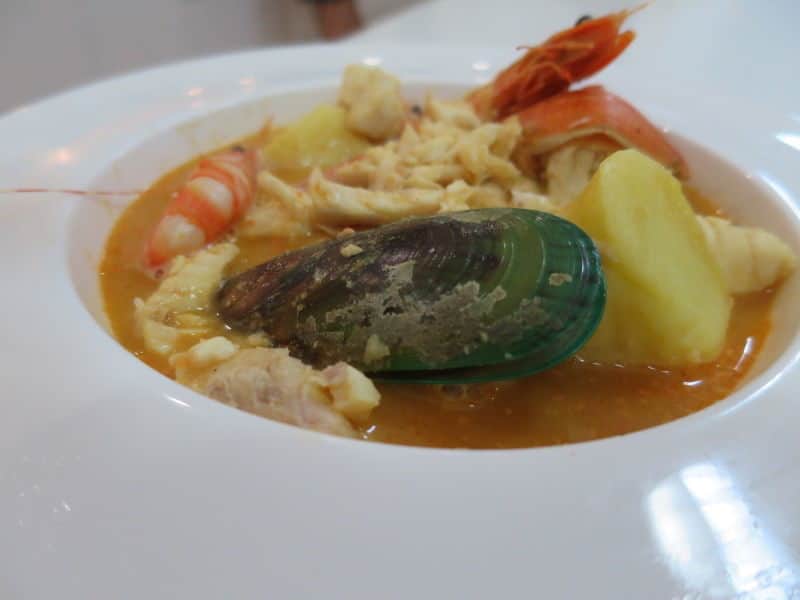 We served this with homemade french baguette and additional rouille.  It was piping hot and absolutely delicious, and was enjoyed with a chilled glass of white to add to the occasion. 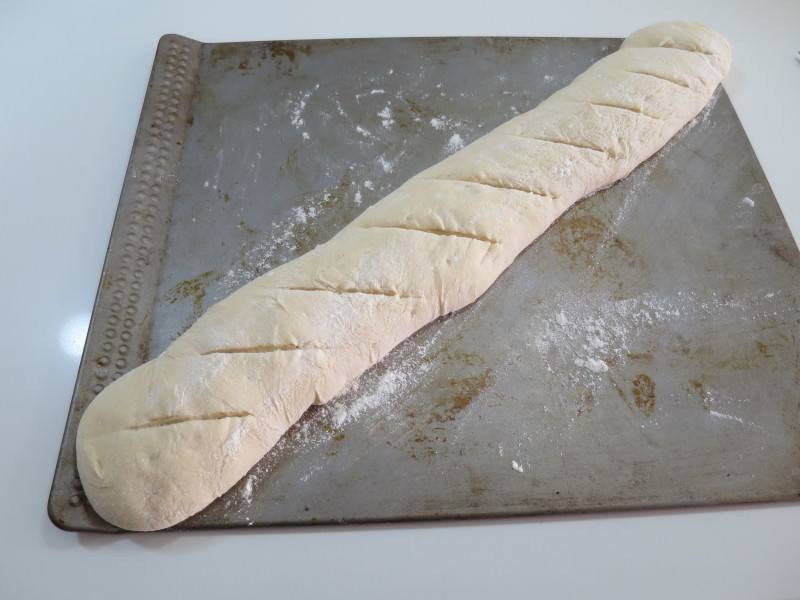 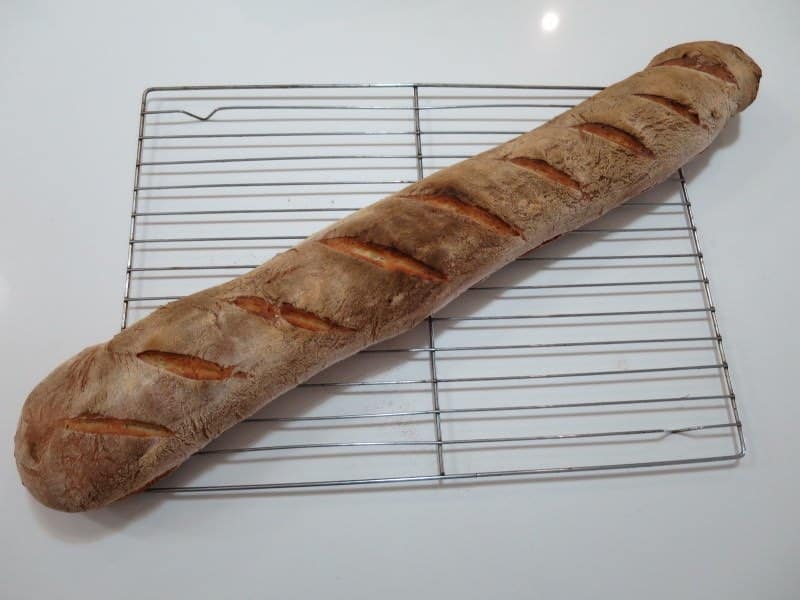 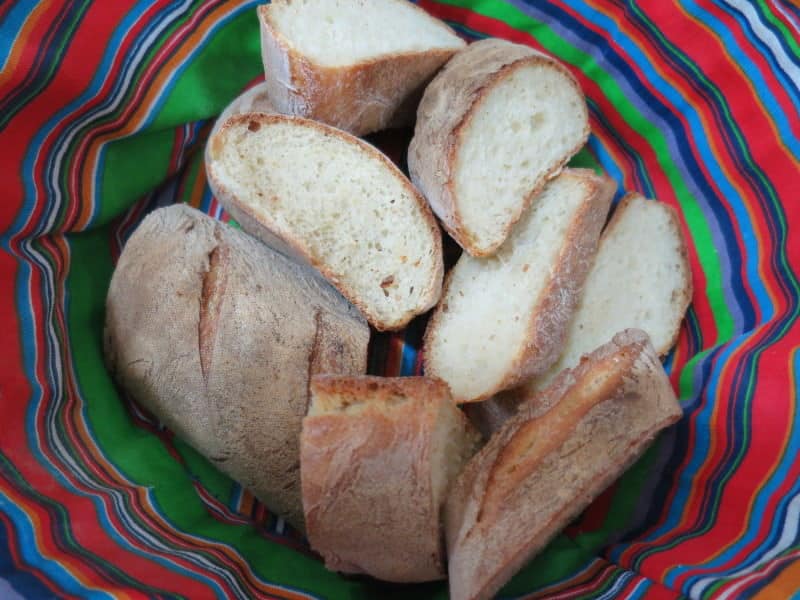 Special thanks to one of our favourite cookbooks “Manu’s French Kitchen” – Manu Feildel, for this recipe.

Have you tried to make bouillabaisse?  Would love to hear your stories, or your variations.  Let me know if you are interested in the whole recipe.  I’d be happy to email it also.

For more French recipes head over to our Cook with Me page. 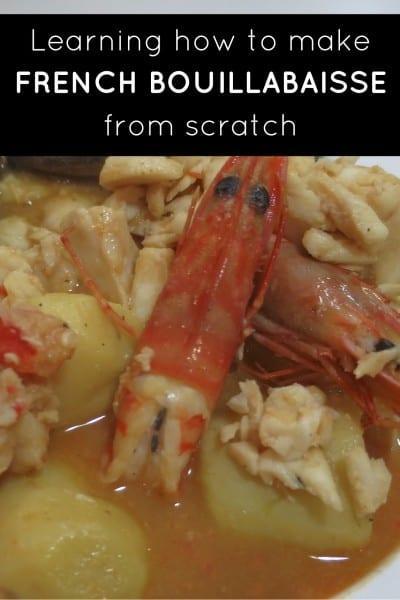 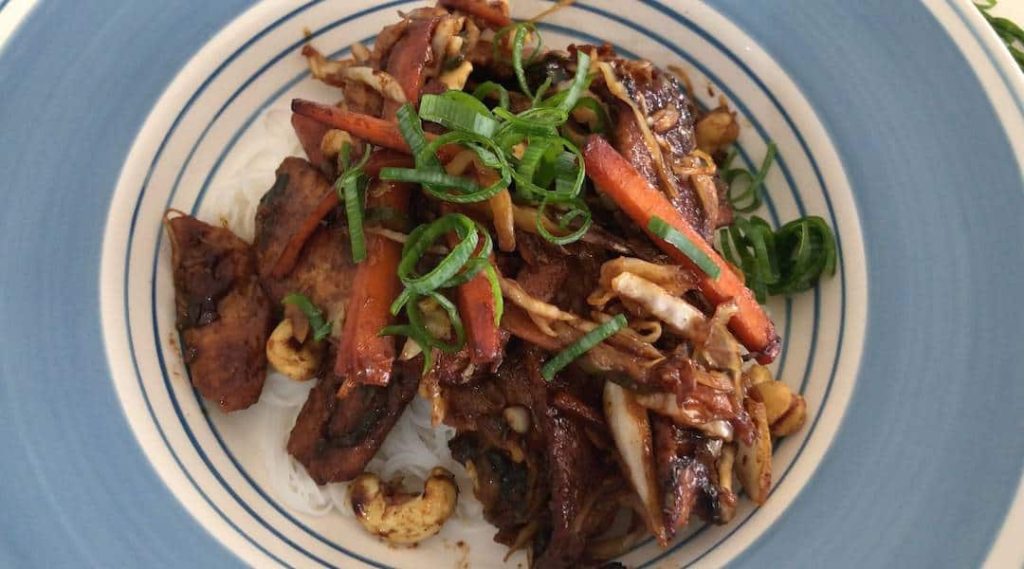 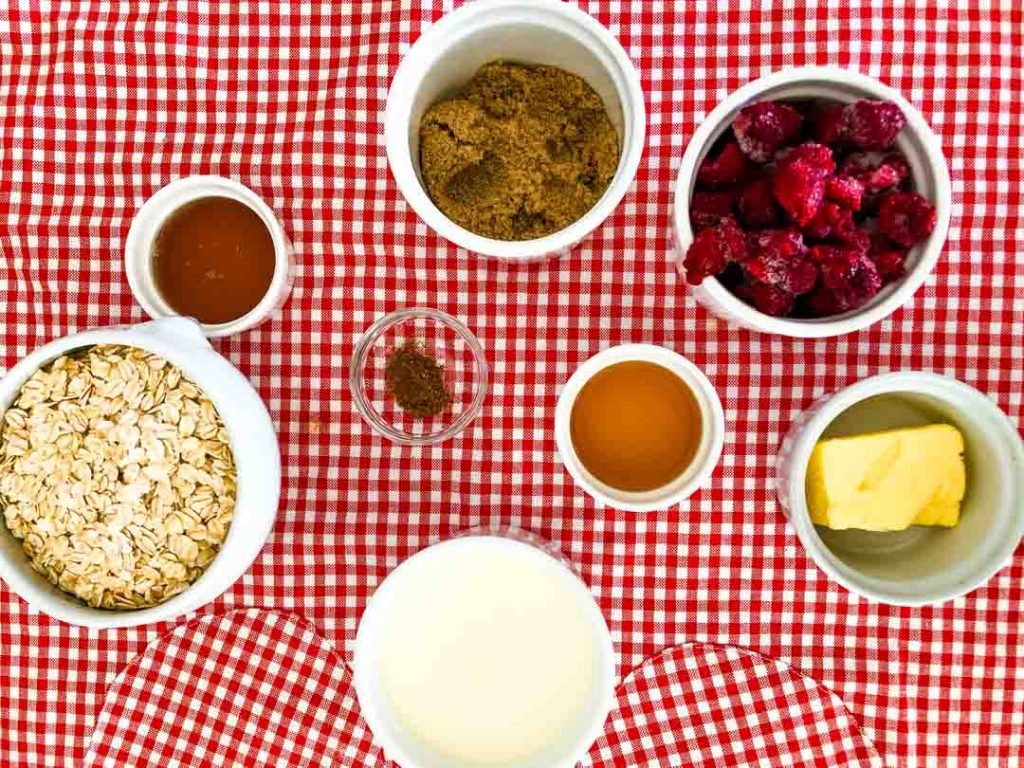 9 thoughts on “Learn how to make French Bouillabaisse from scratch”