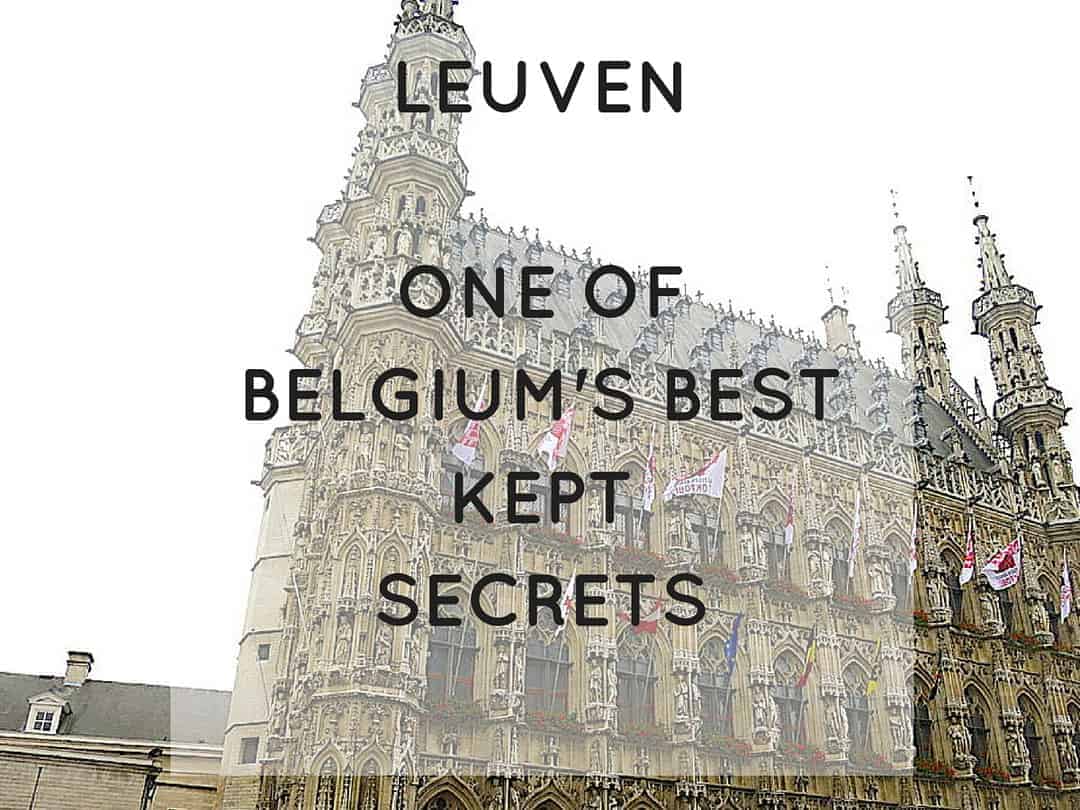 Why Leuven is a must visit town

Welcome to Leuven, Belgium.  One of the ten “under the radar” towns that we had on our list to visit on this trip.

Whenever we return from a trip, I am always asked “what was your highlight”.  It’s a question I have always found difficult to answer.  I still do.  This is because no matter how major a town, or how small, we can usually always find something that makes the visit worthwhile.  It is very, very rare that we find a town we don’t like.

We’ve spent time in large towns, sure.  But what we really love, is getting into the small towns.  The places others don’t know about, or at least the hundreds of thousands of visitors that descend on some towns are not visible.

The towns that fly under the radar.  The under-rated ones.  The ones I love.  The ones where you can mix in with people just going about their daily lives, as opposed to being caught up in throngs of tourists, flocking to look at the same statute or church.

Leuven turned on the weather in a not so pleasant way the day we arrived.  It was bitterly cold, with rain as well.  It was unusually cold at this time of year as the locals kept telling us.  Even they were feeling it.  We noticed it too, with the outdoors areas of the pubs and cafes strangely empty and quiet.  The hum of those eating and drinking their favourite Belgian beer had been confined to the indoors, where heaters kept everyone warm.

The streets of Leuven are dominated by a thin, red-brown brick, not the natural stone colour that I have been used to seeing.  It’s a student town.  If you didn’t realise that, a quick drive on the main roads would highlight this very quickly.  This is a young person’s town.  This is a bicycle town.  Ordinary bicycles.  No poly-carbonate frames or fancy gears to be found here.  A few basic gears is all that’s needed for everyday riding in this small, very flat town.

On almost every corner, and certainly the main squares, there are bikes, tethered to their racks, or to each other to keep them safe until their rider returns.  The Belgians are great bike riders.  And they are respected on the roads here.  Not like in Australia, where each day provides for another round of Car Vs Bike situations.  Often scary, sometimes dangerous.

As I parked up my bike and shoved my frozen hands into my pockets, I took a glance skywards.  I was instantly mesmerised. The Leuven Town Hall  on the Grote Markt was looming large over me, and as the rain sprinkled down my face, the last thing I was thinking of was an umbrella.

This Town Hall was really something to behold.  Built in the 1400s, I find myself simply stunned that a building like this could be built in 30 years.  It is incredible.  The intricate work on the facade is a lost art.  There are 236 statues that adorn its beautiful facade, added years after it was originally built.

It was here in Leuven, our third stop in Belgium, that I was truly sold on what a beautiful country this was.  And, I was incredibly pleased that we had given ourselves the task of finding 10 of the most beautiful and underrated cities here.  This was going to be fun!

Continuing the gothic theme, the Collegiate Saint Peter’s Church sits across the square.

Now, you’ll remember I mentioned that this was a student town.  And what do student’s like to do?  They like to party.  In the Oude Markt (Old Market), the “longest bar in the world” plays host to hordes of students and visitors every night.  Over 40 bars are here, nestled around the perimeter of the old square.

This is one town where if you couldn’t find a drink, you’re not looking hard enough.  Today, however, it was raining, and the square looked more than a little forlorn, with chairs tipped up onto their tables, and rain running off any of the umbrellas that were still up.

From the longest bar to the oldest

Say what?  How many beers?  If what the sign says is true that is unbelievable.  Where do they put the 400 individual glasses that they would need to serve each beer in?  Better take a look.

De Fiere Margriet was extremely unusual in its decor and incredibly local and friendly with its host and clientele.  The locals kept us entertained for ages, laughing, calling out to each other and of course, having a good drink.  We settled for a glass of Stella Artois, after all, we were now in the town where it is brewed.

We got to choose our glass too from either the modern chalice or the rarer, thin, gold-rimmed glasses.  As much as we tried to encourage the lady behind the bar to let us buy them, she wasn’t coming to the party.

We would have loved to do a tour of the brewery but we were in town a little earlier than the weekend, which is the only time they conduct them.  Never mind, I can drink their beer perfectly well without a tour.

On our way out of Leuven, I couldn’t resist going for a bit of a whizz around the square (with all the other students) on my bike.  The University Library which stands on the edge of this square is considered by many to be the most spectacular building in Leuven.  I agree that it is incredible, but in my opinion, the Town Hall wins out.  It’s a close call though, and I really am splitting hairs.

With the weather only getting worse, we elected to hit the road once more.  It had only been a short drive from Brussels to here (about 42km) so a little more driving today wasn’t going to hurt anyone.  We drove on to Mechelen, another 24km drive.  Along the way, we pulled up alongside a canal to have some lunch.

The weather hadn’t improved as we pulled up at Mechelen.  Never mind.  We had wet weather gear with us, so we jumped on the bikes again and went into the town to acquaint ourselves with it before unleashing ourselves on it tomorrow. It was freezing, but somewhat exhilarating, as we zipped along the bikepaths.

We had a terrific, and highly informative chat to the person at the tourist office, leaving with our arms full of brochures and great tips for where to eat and drink.  We were set for tomorrow.

With all the “work” done,  it was time to try another local drop, so we headed for Taverne Paviljoen, on the Grote Markt.  In Mechelen, their local beer is Golden Carolus, so of course that had to be one of the daily drops.  I chose Jupiler, the highest selling beer in all of Belgium.  It’s another easy to drink beer, light in colour and unoffensive in flavour.  The Golden Carolus, made by local brewery Het Anker, has a fuller strength and more body to it’s fine drop.

Our home tonight was a bit of a test.  Apart from our overnight stay in Dinant, where we stayed in a public carpark, tonight was more of a classic “wild camp”.  We had found this location on an online motorhome website.  If luxury is your thing, then I wouldn’t bother stopping here.  It is simply a truck stop, attached to a public carpark for Stad Mechelen.

Even though it is near a major road, it is reasonably quiet.  Trucks will come in during the night but I’m a heavy sleeper, particularly after a long day out in a new town.  In the morning, I awoke to being completely surrounded by trucks, having not heard a single noise when they arrived.  Despite the location in a non-sanctioned campground, it was safe, and this one was free.

If staying in a carpark is not your style (and I understand it’s not for many), then why not check out these hotels in the city.

4 thoughts on “Why Leuven is a must visit Belgian town”