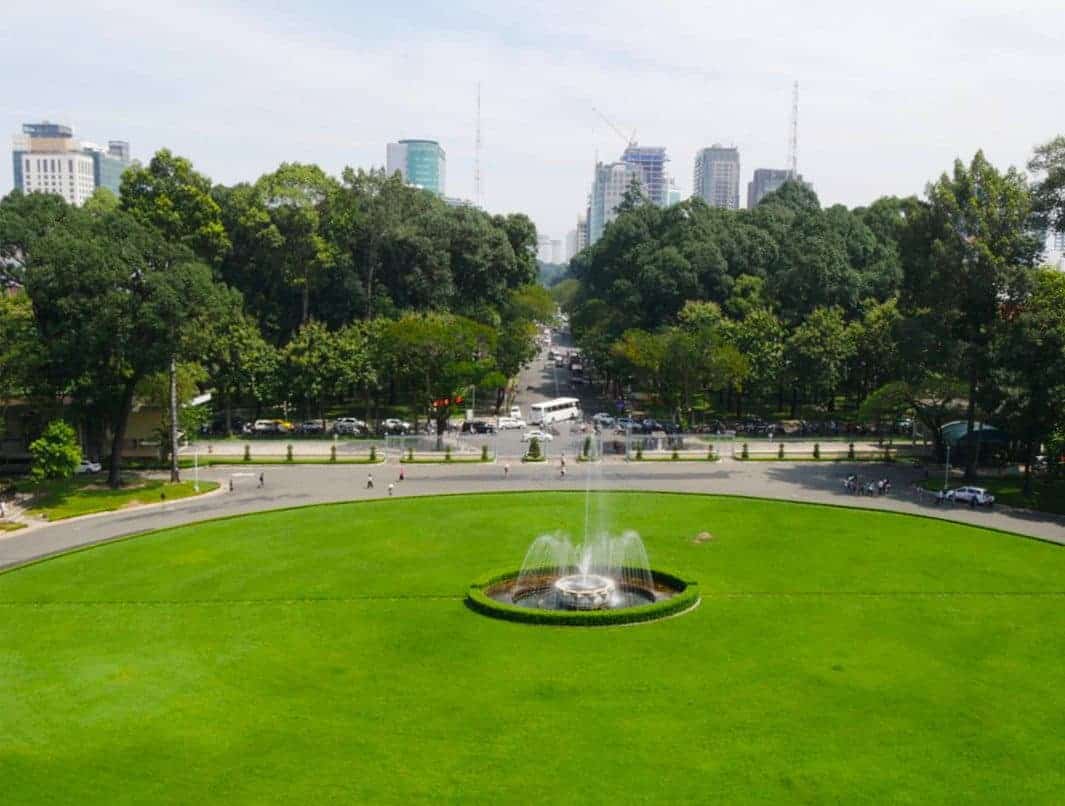 One of the great museums in Ho Chi Minh City

I’m not a big fan of museums at all.  Visiting them is not something we actively plan for, and if we went an entire trip without setting foot in one, there would be no tears.  But, occasionally, we do find one (or two) that interest us.  Nine times out of ten, it will be related to war history, which is more modern history and for us, more relatable to today’s world.

War history is everywhere in Vietnam, and it is no more visible than in Ho Chi Minh City.  A city, formerly known as Saigon, that has seen more than its fair share of wartime.

The Independence (or Reunification) Palace is most known for its place in the Vietnam War years.  However, its rich history dates back to the 1860s when the French held significant imperial rule over this country.  One could also argue that it’s not technically a museum.  Perhaps that’s why we liked it!

A bit of history

From the 1880s through to the end of World War Two in 1945, the French-Indochina Governors used this palace, known then as Norodom Palace, as their base.   In 1945, the Japanese took control briefly, before handing it back to the French, who again held it until their defeat in 1954.

In 1954, the palace became the home of the President of South Vietnam.  More strife was to befall this building when members of the Vietnam Air Force attempted to kill the President by bombing the palace in 1962.  Whilst the President was not injured, others were, and the building was so badly damaged, it was demolished.

The palace was rebuilt and renamed Independence Palace in 1966, becoming the home of a new President once more.

As though it had a target on it, the palace was bombed yet again during the later years of the Vietnam War.

The red circle below is one of two on the roof of the palace.  The circles indicate the location of the bombs that were fired at the palace from aircraft.

Rebuilding – a palace and a country

The new palace, an imposing Soviet looking concrete building, remained a target.  On April 30 1975, it became the location for the ending of the Vietnam War as the National Liberation Front sent tanks crashing through the gates.  The leader of the NLF went into the palace, taking down the existing flag and replacing it with one of their own.

Today, the building remains government-owned and is used for official business on occasion.  It mainly serves as a museum, offering an insight into the former life inside.

A world belonging to yesteryear

It’s a huge building, with vast, open spaces and walkways. There are internal courtyards where souvenirs of former presidents are on display.  In the basement, a bomb shelter was built, given the propensity of the palace to be attacked.

There are meeting rooms, elaborate official reception rooms and the laid back games room and cinema.

I couldn’t wait to get to the roof where a wonderful view awaits you. On one side, the UF-1 helicopter, a sign of the US involvement in the Vietnam War, sits on the helipad.  On the other side, a view down the street leading down towards the Saigon Central Post Office and the Church of Notre Dame.

The furniture shows a strong influence towards its European heritage, with beautiful antique furniture.  There’s a definite retro feeling here, and I am somewhat surprised when I remember I am in Asia and not in a European palace when I stand in some of these rooms.

The President’s chair in his reception room sits up a little higher than the others and is adorned with a dragon head carving.

I loved the State Banqueting Hall for no other reason than the gold, velvet-like carpet.  If ever there was a colour that depicted opulence it’s this one.  I can visualise this long table laden with wonderful food being shared amongst the dignitaries.

In this room, with its bright orange high backed chairs, I can imagine the First Lady, entertaining her guests.  Guests would stand at the windows, looking out over the gardens.

The President and his ministers sat around this table, discussing the strategies of the day.  Imagine the discussions that would have taken place here.

Prior to 1975, many foreign ambassadors came to visit with the President and they would meet with him here.  This room stands out from the overall feel of the palace due to it’s Japanese influences.

One of the many planning rooms in the bunker.  I just loved the reminder of communications in the 70’s.

Through ancient and modern history, the Independence Palace has endured more than most, and yet it stands here today as a sign of the reunification of Vietnam.  Opened to the public in 1990, it now offers group tours or the ability to wander around privately yourself.  Events and exhibitions are held here also.

The palace is open daily from 7.30am – 11am, re-opening again at 1pm until 4pm.  Tickets are very cheap with adults costing 30,000 VND (about $A2) and students and seniors at reduced rates.

If you are spending some time in Ho Chi Minh City, then a visit here will surely be on your list.  If you only have 24 hours, a quick visit would still be considered worthwhile.