Our overnight stopover in Seyðisfjörður was as far north as we would venture on the eastern side.  This was our fourth day driving Iceland’s Ring Road and it was time to head back towards the west.  First, our journey would still climb further north though, with Akureyri to be our final destination today.  In the meantime, there would be some very special North Iceland highlights.

Having followed the path of the glaciers since Reykjavik, today this part of the country took us away from the icy behemoths and into some of the strangest, lunar-like landscapes we had seen so far.

The photo below is a classic shot of driving into what sometimes felt like either the great unknown or the end of the world!  Having just come from the spectacular glacier environment, this was indeed different.

The land is barren here.  No trees and barely anything green to speak of.  It’s a tough environment that’s for sure but it just adds to the complexity of Iceland.  It was also at this moment that I came to firmly dispute something I have heard quite often.  It is a common suggestion that Iceland and New Zealand are the same and that if you have been to New Zealand, there’s absolutely no point coming to Iceland.  Here I completely disagree.  Sure, some of the green mountainous areas, even though with the glaciers can look similar to some of the New Zealand landscapes, but that is where it ends.

Nowhere in New Zealand do you get the ready access to the glaciers.  The New Zealand landscapes are far greener and more densely packed with lush foliage.  Whilst they do have a couple of areas of obvious thermal activity, it’s different to Iceland and these lunar landscapes, well, I’ve never seen anything quite like it in New Zealand either.  To compare Iceland with New Zealand or vice versa is to do both of them a complete injustice.  They are uniquely different and deserve to be considered as two incredible places to visit.

Heading to the Northern Lights? Check out the best hotels here

Enroute to Akureyri is the Dettifoss waterfall and another must see.  I’ve often read that people have unfortunately run out of time in their itinerary and have missed Dettifoss.  I know you can’t see everything but if you are up in this part of Iceland, try to do everything you can to take the detour off the Ring Road to see it.  I can guarantee you won’t be disappointed.

Dettifoss is regarded as being the strongest falls in all of Europe, with 500 cubic metres of water pushing over the edge every second.  I struggle to comprehend that number but then as we sit on the edge of some extraordinary cliffs watching it, it seems to make sense.   Contributing to its power is the 100-metre width and the falls of around 45 metres into a deep canyon.

The power of the water and usually a good helping of wind contribute to plenty of mist around the falls.  This also usually means that rainbows are visible as the light plays its magic with the mist.

This is a canyon waterfall which makes it different to many of the other falls in Iceland, which often fall from the top of a mountain or cliff.  This one pounds into the cavern, where natural forces have split these rocks apart, forming sheer cliff faces and deep ravines below.  Many canyons are formed through the slow erosion of the rock caused by water over extremely long periods of time.  This canyon was said to have been formed following three rapid floods that took place thousands of years ago, putting pressure on the basalt rock and creating large and immediate canyons.

The area around Dettifoss is also known for its hiking trails.  There are short walks but also a 34-kilometre trail from Dettifoss to Asbyrgi.

The western side of the falls is far more developed in terms of viewing platforms and there are many great vantage spots to be able to get a view of the falls, even when it is busy.

From the highest platform on the western side, there is an incredible view of the Jökulsa River and the Dettifoss waterfall.

Getting to Dettifoss Waterfall

There are two roads that lead off the Ring Road.  The #864 road runs parallel to the canyon on the eastern side.  This is a gravel road and driving will depend on the weather, the vehicle you are driving and whether you like a rough and slower road trip.  The eastern side is also not as well developed for visitors here with the main viewing platforms on the western side.

Read our tips for driving in Iceland by clicking here

Road #864 is closed during winter or poor conditions.  When driving in Iceland, it’s always a good idea to check the weather and road conditions before starting out.  You can check those conditions here.

On the western side, the #862 road is paved and much easier and quicker to drive on.  This road is usually closed in the winter months also.

The road takes you to a large carpark (with bathroom facilities) and then you need to walk down to the canyon which will take a person of reasonable fitness about 15 minutes.  Remember to wear walking shoes with good grip as whilst there is a path, it is rocky and sometimes wet and slippery.

When down near the canyon, especially on the eastern side don’t get too close to the edge (like we saw many people do).  The rock of these canyons and cliffs are made from basalt which fractures easily.  I imagine it’s infinitely better to see the falls from a safe viewing distance than to tumble over the edge.

Just a little further down the road from the turnoff to Dettifoss is Lake Mývatn, Iceland’s fourth largest lake and home to many fish, animals and plants on its large nature reserve.   At the base of Namafjall, just before Lake Mývatn is Hverir, a geothermal reserve of the most spectacular kind.   The few mountains that can be seen in this area are the result of eruptions that occurred underneath the glaciers during the Ice Age.

It is here that you can truly appreciate the raw power of Mother Nature.  As we walk into the reserve, my face covered with my scarf once again because of the strong smell of sulphur, we pass bubbling hot springs and boiling mud pools.

Steam is extruding from holes and vents that I learn are called fumeroles. The stinky smell of rotten eggs caused by the hydrogen sulphide still somehow finding its way underneath my scarf.  Holding my breath for long periods of time becomes a good option.

If I thought the earlier landscapes were off the planet, this area took it to a whole new level.  Orange and yellow stained ground mixed with the dark grey and black from the mud.   It’s a harsh area here, where nothing grows.

At 1000 metres below the ground, the temperature reaches around 200 degrees Celsius and above.  It’s very important when walking around here to keep to the paths.

How to get to Hverir

The geothermal reserve is easy to access with a road coming directly off the Ring Road, six kilometres east of Lake Mývatn and near the town of Reykjahlíð.  There is an area for parking here and well-signed paths lead you throughout the area.

A little further west along the Ring Road is Gamli Bærinn,  a small, cosy and very friendly location for lunch or dinner.  We tried their house speciality, the lamb soup, seeing lamb is so highly revered in Iceland.  It was a good bowl of soup, without being anything special, although on a cool day the free refill is a nice touch.  It’s the most expensive bowl of soup I’ve ever eaten however at about AUD$25 (USD $19).

Driving in North Iceland is full of surprises

The drive today was 340 kilometres and would be the largest of our entire eight-day trip.  It’s not an onerous drive though, and we took our time, stopping along the way as usual and making the most of the landscapes that continued to throw up new and interesting sights.

Don’t miss the Golden Circle when driving in Iceland

Driving the Ring Road from Jokulsarlon to Seydisfjordur

Looking for a fun  resource on driving in Iceland?  This guide book is a little different to most.  Check it out. 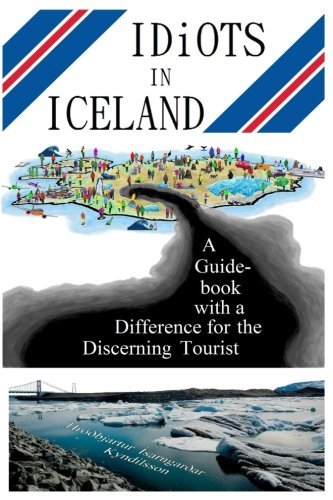