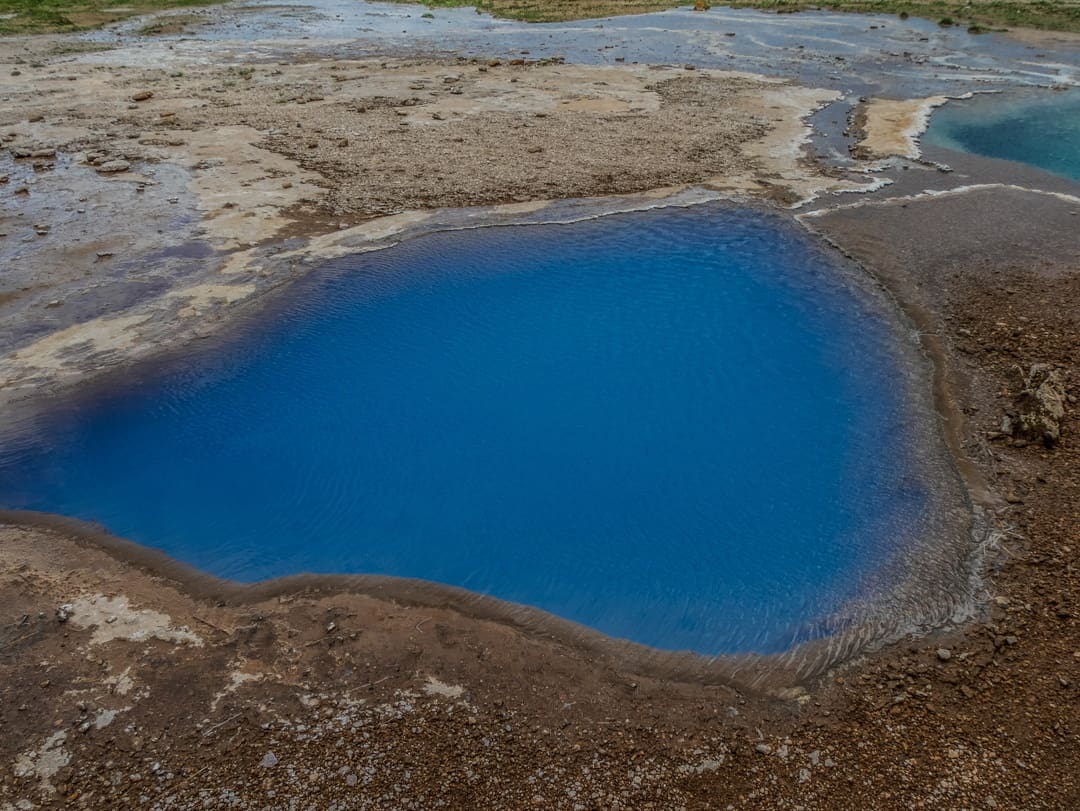 The Golden Circle in Iceland is heavily frequented by tourists, there’s no denying that.  It’s a fact that in summer time there are going to be heaps of people.   As we did our basic pre-planning for our road trip around Iceland’s Ring Road, it was the first thing that came up on almost every search.  We knew we would have to go there, irrespective of how many other people might be competing for the same view.

Whilst sometimes certain places or sights can be over-hyped and a huge disappointment, it’s definitely not the case with the Golden Circle. Sure it’s beautiful, but there’s another reason why it’s so popular.

For those who visit Iceland for only a short period of time and base themselves in Reykjavik, it’s the perfect location for a day trip.  Tours galore run in and out of the capital city, making it an easy way to see this drawcard.  If you are hiring a car for the trip out of Reykjavik, it’s also a very easy drive.

Having travelled the country for eight days in our campervan though, seeing all of the amazing things around the Icelandic countryside, I realised this.  The Golden Circle provides visitors with a compact snapshot of some of the best natural attractions that Iceland has to offer, waterfalls, thermal activity and national parks come together rather conveniently.

READ NEXT:  Visiting Iceland?  Why you should hire a campervan

We arrived here on a day when Iceland was intent on showing her might.  It was our first real introduction to the Icelandic winds that we had been warned about.  We would see plenty more of this over the next week, but right here as we attempted to get out of our parked campervan, it was proving a challenge.

A timber boardwalk leads down towards the waterfall.  Trying to walk in a straight line was interesting as the wind made every effort to knock me over.

Down at the canyon, the conditions were worse, with the wind whipping up the spray from the waterfall and throwing it around.  Despite trying to weigh my tripod down with weights, we were no worthy challenger to this incredible force.  Trying to take photos without rain spots was just as tricky.

The River Hvítá turns into a raging, thrashing torrent of whitewater as it approaches the area known as Gullfoss.  With water being fed from Langjökull Glacier, the country’s second largest glacier located further north, it creates a magnificent show as the water is restricted from a wide river into a more narrow waterway as it approaches the falls.

The roar of the water is almost indescribable.  It’s a sensory overload with all the natural weather elements at play here, and it’s a battle sometimes just to stay on your feet.

The water tumbles down the first group of rocks, creating an 11-metre fall which is impressive all on its own.  But, as the water then gains momentum from this cascade, it hurtles towards the canyon for its final 21-metre drop.  The roar is deafening.  The spray fierce.

History shows that the Gullfoss falls have always been in the strategic sights of many an entrepreneur.   It did, however, avoid any unscrupulous development or damage over this time and as of 1979, the whole area was made into a protected nature reserve.

The Gullfoss waterfall provides access only from the top, giving a new experience to those who are used to standing at the bottom of a mountain or canyon to watch the water come down.  As the water pounds into the canyon below, you can hear and see the full force of it as it disappears out of sight.

What to take to the Gullfoss Waterfall

I’d recommend taking a waterproof jacket, preferably one that will also keep you warm and good walking shoes with good tread underfoot.  We visited in summer and it was still very cold here.  Leave your umbrellas at home as they will only turn inside out.  If you are a serious photographer, some decent weights are needed and a rain hood.  Bring your common sense too.  If it looks dangerous, it probably is. 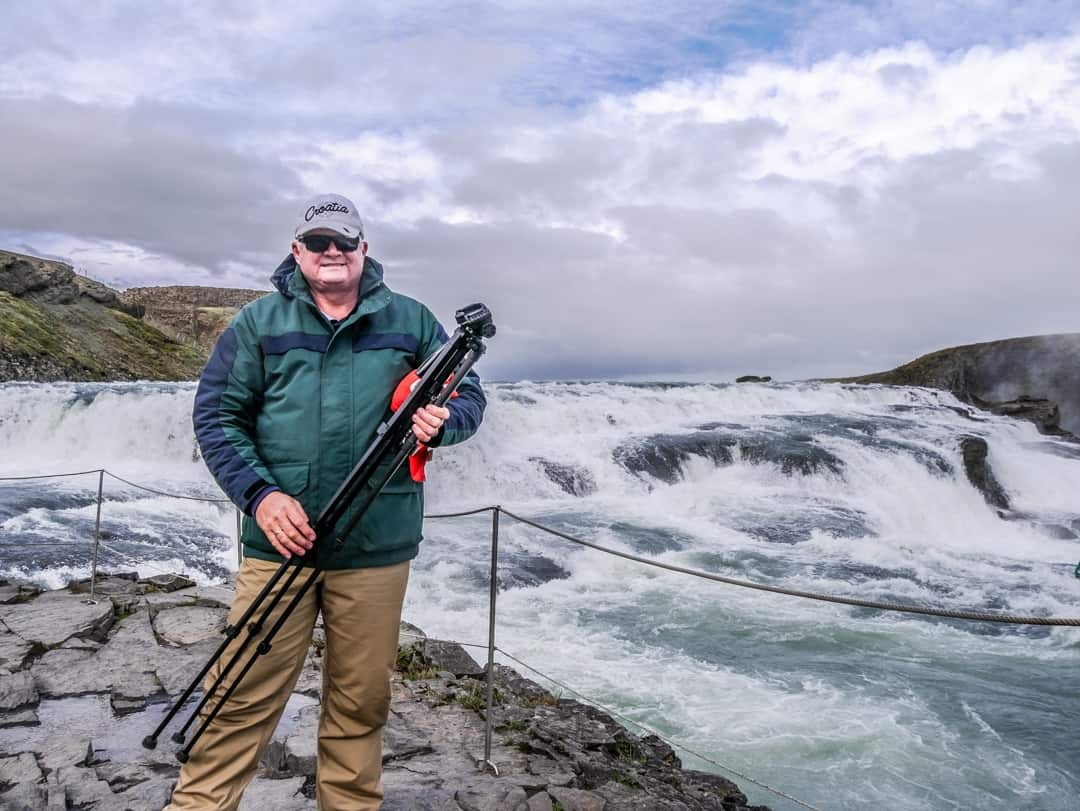 What not to do at Gullfoss

Don’t be that stupid tourist.  Seriously.  You know the ones who put their own lives and usually those of others at risk by standing too close or going out on a slippery rock, or jumping through a roped off area with signs saying “Stay out”.  You might think you’re cool or even funny, but moments like that mean nothing if you end up in the water.

When to visit the Gullfoss Waterfall

The Gullfoss Falls may be visited at any time (technically speaking) as it is open 24/7.  However, this is Iceland and weather will always play an important role.  In times of bad weather or winter, it’s best to make some inquiries first.  Certain viewing platforms and paths may be closed off during winter or dangerous weather conditions.

If you can, go early, or a little later in the day.  The tour buses tend to arrive mid-morning.

It is also free to enter the nature reserve.  There is an excellent Visitor Centre, souvenir shop and cafe located just near the carpark.  It’s a great place to seek out some warmth if the outside elements aren’t exactly friendly.  Toilet facilities are also available.

There is a very well constructed timer boardwalk that leads from the carpark to the falls and a purpose-built viewing platform right at the top.  Once you get to the falls, the pathway, whilst paved can be a little tricky in some places due to both incline and water.  In winter the tracks will get icy too.

How to get to the Gullfoss Waterfall

Gullfoss is located approximately 110 kilometres south-south-east of Reykjavik and if you are self-driving should take around 1 hour 45 minutes.  It’s an easy drive and there’s beautiful scenery along the way to keep you interested.  If you are just visiting Gullfoss, allow at least several hours there to take it all in.   There is a large hard-stand carpark also provided.  Alternatively, day tours operate from Reykjavik.

We visited the Golden Circle as part of our eight-day road trip. You can read about it here.

Who doesn’t love to watch a geysir erupt?  I find them fascinating and eagerly sit by, willing them on to spill their boiling hot water upright into the sky.  The term geysir is one that is used the world over for any such event.  Interestingly, the word was taken from this location, from the hot water spout called….you guessed it, Geysir.

Unfortunately, Geysir in the Golden Circle has seen better times, no longer commanding any attention as an eruption is rare. Folllowing an earthquake in 2000, it started to erupt once more, but this was short-lived.  Litli-Geysir still erupts but the big attention drawer now is Strokkur. 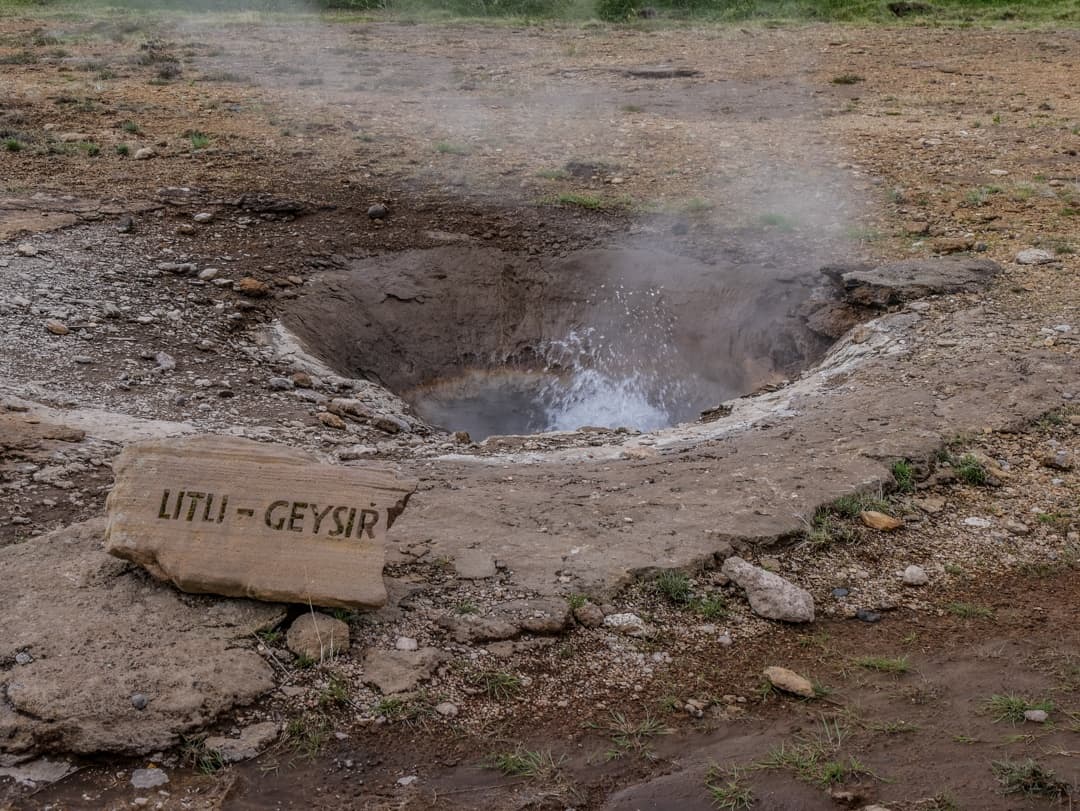 Strokkur is the most active of the geysirs in this geothermal park, covering approximately three square kilometres.  The geysir erupts approximately every 10-15 minutes, depending on how quickly the pressure builds up beneath the surface. 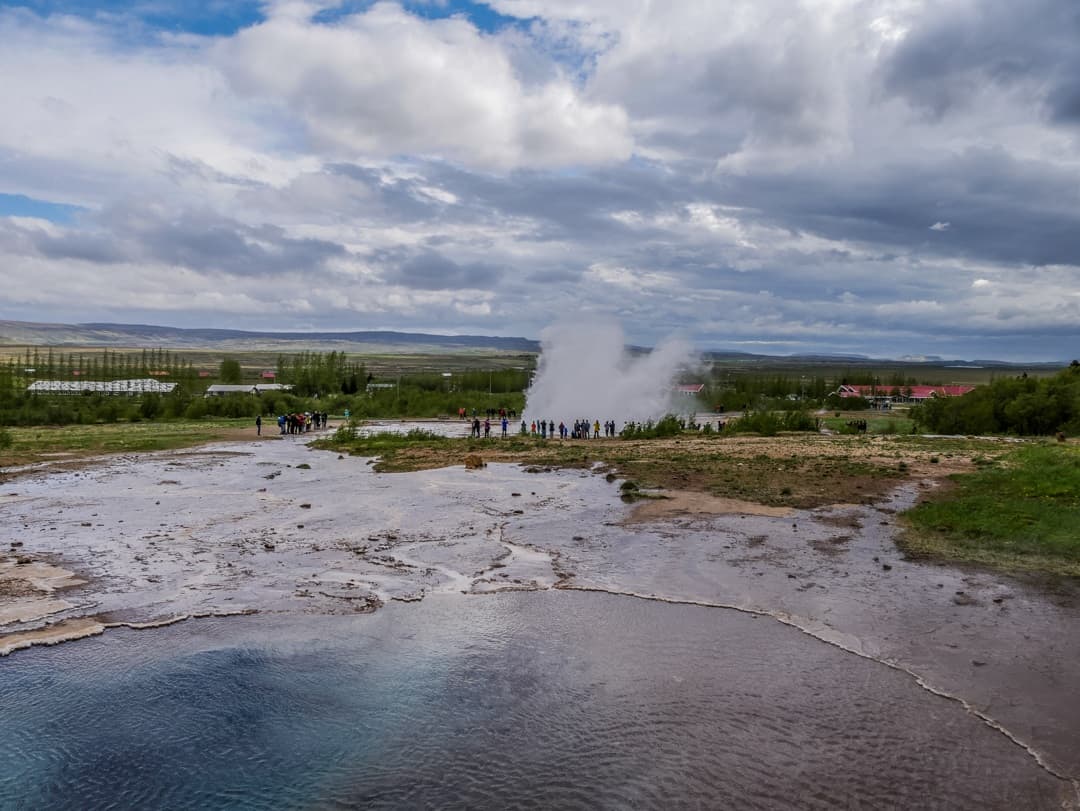 The most incredible part of Strokkur erupting is the blue bubble.  As the heat and pressure build up below, an electric blue coloured, convex bubble starts to build over the opening and it grows and grows until it finally bursts skyward, projecting its boiling water up to 20 metres or so into the air. I could have stayed there just to watch the bubble.  It was the coolest thing to see and can’t be seen anywhere else in the world.

When to visit Geysir

Being in a nature reserve, the park is accessible all year around.  As noted above with Gullfoss, the weather may determine whether certain areas are open or safe.  There is a Visitor Centre on the main road across from the geysirs, with cafe, shop and facilities.  It is currently free to enter the park.

How to get to Geysir

Once again, there are many tours and day trips that operate out of Reykjavik.  For those who are self-driving, the most direct route from Reykjavik is through the Thingvellir National Park.  It is a drive of 106 kilometres and should take around one and a half hours.  Alternative routes add slightly more kilometres but don’t necessarily add to your investment of time.

As you get closer to these areas, there are some gravel roads.  Slow down your speed and respect others who are probably driving a hire vehicle like you.  Even if they aren’t, it’s not cool to spray others with gravel and dust.

Note:  Gullfoss and Geysir are approximately 10 kilometres apart, meaning that any visit to one should really include a visit to both.  You’d be silly not to.

You can stay in a hotel with a view of the geysir. Click here to see photos and reviews of the Geysir Hotel

The third part of the Golden Circle is Thingvellir National Park, an area of geological significance.  Located as part of a fissure zone that runs through the country, it is situated on the tectonic plate boundaries, similar to what can be seen down in the Reykjanes area of southern Iceland. 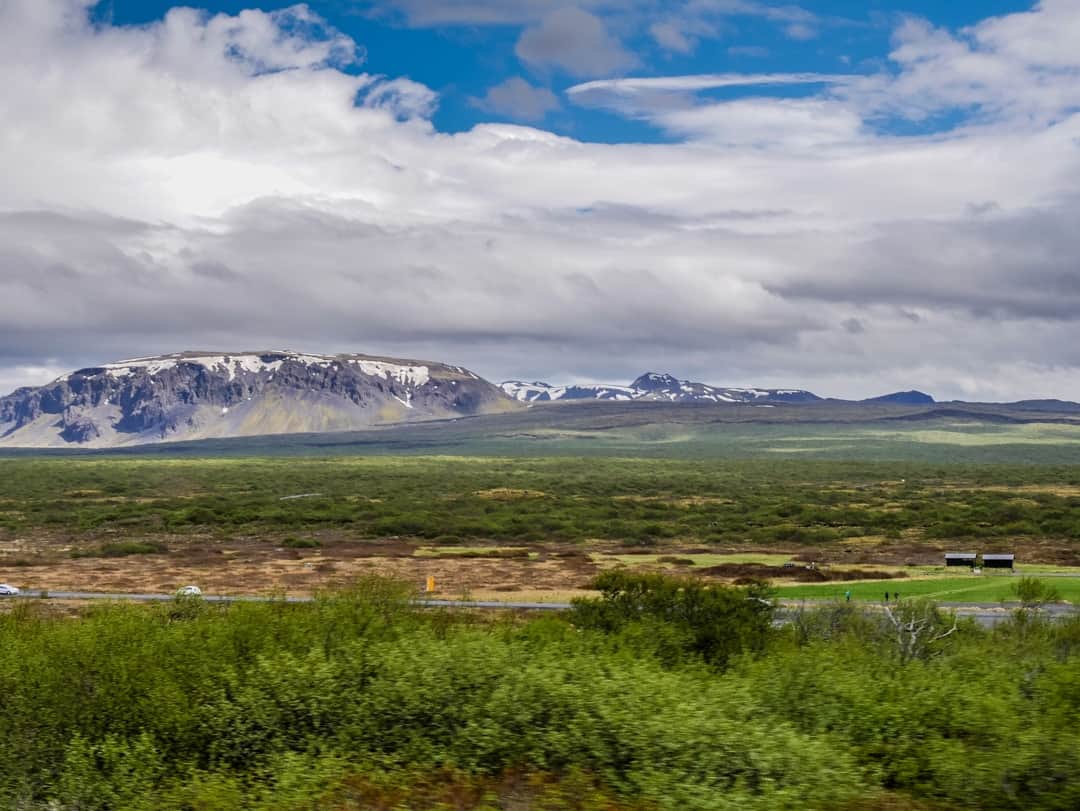 Visitors come here to horse ride, hike, fish and dive.  Diving here is said to be incredible, with the clearest water in the world.  Freshwater at 2-4 degrees Celsius comes from the glaciers all year round and never freezes.  The most interesting part?  The diving occurs between the Eurasian and the Atlantic tectonic plates mentioned above.  When you dive here, you are diving between two continents.

When to visit Thingvellir National Park

Once again, the national park area is open all year round.  Certain activities may not be possible at various times of the year.

The main Visitor Centre is located at Hakið and includes a multi-media program that runs for about 40 minutes.  There are also facilities available, but these carry a small charge.

There is also an Information Centre at Leirar, near the campgrounds.

How to get to Thingvellir National Park

Thingvellir National Park is located about 55 kilometres or a 45-minute drive from Reykjavik.   It is more directly accessible via road 36, a road which remains mostly open even in winter.  Taking alternative routes is possible in the summer time but winter will see some of them subject to closures.

How to do your own road trip in Iceland

8 thoughts on “Golden Circle Iceland self-drive: Why you shouldn’t miss the Golden Circle”