Both sides of the Regents Canal were humming, with people quite literally flowing over into the water.  Legs dangling from overhead bridges and into the canals, juggling food, beers and sometimes both.  It was a gorgeous summer’s day in London, and the people were out in force.

Our visit to Camden Markets in London came at the end of a leisurely Regents Canal boat ride from Little Venice.  It had taken an hour to get here but had been a worthwhile and relaxing journey.

Development of the area now known as Camden began in the late 1700’s but it wasn’t until the opening of the Regents Canal in 1820, that progress really started to take hold.  The “Camden Lock”, officially known as the Hampstead Road Lock, became the central point from which all development radiated.

The burgeoning railway industry also created further prosperity to this area, along with an increase in migrant population.  Buildings were built around the lock as warehouse and distribution points to support the trade on the waterways.

There were also plenty of horse stables around, given the reliance on horsedrawn boats along the canal.  Evidence of this can be seen in the Stables Market, a part of the overall Camden Market scene, and where you’ll find plenty of vintage items.

In the 1930’s the area was economically impacted by the decline of both canal and railway transport.  It was also the subject of heavy bombings during World War Two.  The town of Camden fell into great decline.  In the 1960’s some entrepreneurial men leased some buildings around the lock, transforming them into craft workshops.  Crafts became a significant local industry as a result.

In 1974, a weekend market was introduced, one of the first antique and craft markets in London.  It was conducted on the site of former timber miller T.E Dingwall, now one of the most significant buildings on the lock.

As one of London’s leading markets, today it plays host to nearly 30 million people a year.  With over 1,000 stallholders selling everything from arts, crafts, jewellery, antiques, fashion and food.

Located between Chalk Farm Road and Regents Canal, there are several buildings all used to house the stallholders, many of which are incredibly beautiful inside.

Camden Markets seem to have something for everyone.  Random objects, plastic toys, hats, scarves, leather goods and t-shirts with crude sayings are here.  So too are beautiful antiques, jewellery, socks, all manner of fashion items, shoes, records and books.

Then there’s the food.  Food stalls are everywhere covering every latest food fad and trend, promoting healthy eating, multi-cultural eating and there’s always evidence of junk food!  The smells permeate the market, making me now wish I hadn’t eaten before I arrived here.

This is the kind of food we love with a great street food vibe.  People are sitting down in dedicated eating areas, but with this many people, you need to be quick to secure a spot.  The alternative?  Find a spot anywhere and sit down and eat your beautiful food.  No-one seems to mind, it’s all part of the scene.

The aromas of portuguese chicken mix in with the spice of a pungent curry.  The smell of coffee floats overhead and mixes with the sweet smell of cinnamon as fresh churros are made in front of us.  There’s a myriad of food to choose here and there is quite literally, something for everyone.  This is after all London, a true melting pot of many cultures, nationalities and languages.

Soak up the Camden Markets atmosphere

We couldn’t pass up the opportunity to have a beer by the canal and hang out with the local crowd.  The view from the front of the Ice Wharf Hotel was fantastic and it was good fun just watching the lively afternoon crowd.  My pint of pale ale however,  was perhaps the warmest I’d ever had.  Needless to say, as the pint got older, it got even hotter so Stirling had to take one for the team and finish it off. 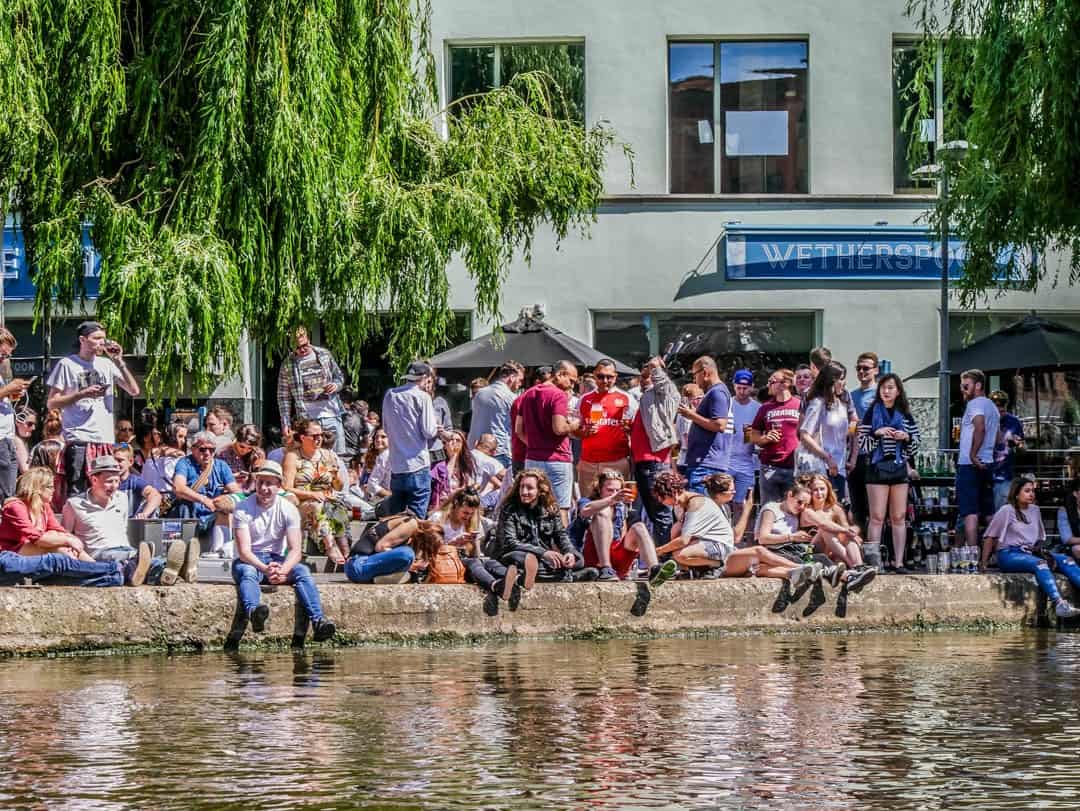 Leaving the market behind, it was time to explore the High Street and its surroundings.  The High Street is like many other London High Streets, full of a mix of quality fashion shops, knick-knacks and places to eat.

How to get to Camden Markets

The closest tube station to Camden Markets is Camden Town on the Northern line. Further afield, Chalk Farm and Mornington Crescent are also on the Northern Line.  Alternatively, Camden Road is on the London Overground.  All are within 5-10 minutes walk from the markets.

Buses run across the city into the Camden Town area.

Check your journey planner for the best route.

The Camden Markets are open 364 days a year.  They are closed on Christmas Day.

The markets open at 10am every day (a good time to go to avoid the large crowds) until late.  Due to the variety of businesses that operate here, including bars and restaurants, closing times may be variable.  It is recommended to check with the individual location for accurate closing times.

CHECK OUT THE LONDON RESOURCES BELOW

3 thoughts on “Visiting the Camden Markets and street art”