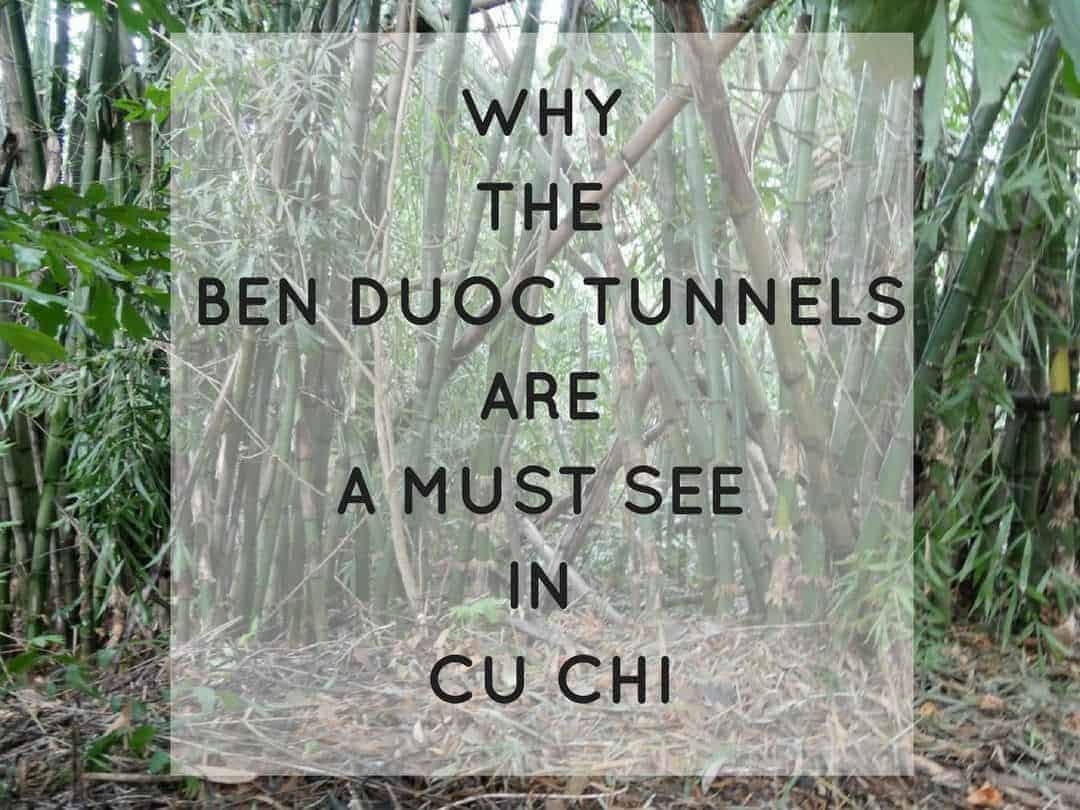 Why you shouldn’t miss the Cu Chi tunnels

As an Australian born during the later years of the Vietnam War, I grew up with constant references to our national involvement, both at school and publicly.  Each year, on ANZAC Day and Remembrance Day in particular, the stories of this war and the losses endured have become part of our national fabric.

My husband gave us a quick refresher course on some of the important points of this war prior to this trip, so we were both really looking forward to visiting here.

Where are the Cu Chi Tunnels?

The Cu Chi tunnels address is given as TL15, Phú Hiệp, Hồ Chí Minh, 733814, Vietnam.  This is not entirely helpful however as there are two tunnels in Cu Chi and this address will only lead you to one of them.

This area is now one of peace, a place where everyday lives have returned to normal following the devastating impact of the Vietnam War on this area.  It has a rural, small village feel about it.  Where shopkeepers sit out the front of their stores, directing visitors to the correct bus and hoping to sell a bottle or two of water.  Where women walk up the road with a basket and return with it full of leafy greens, having foraged on the side of the road.  Motorbikes towing pigs in cages share the road with farm trucks.

There are two areas where you can see the tunnels, Ben Dinh and Ben Duoc.  We chose to go to Ben Duoc as they are the best example of the original tunnels.  Ben Dinh still has tunnels but they have all been widened for tourism purposes.

However, my mission was clear!  If I was coming all this way to see the tunnels, then I wanted to see exactly how they were all those years ago when the Viet Cong used them as part of their strategy.

The Cu Chi tunnel complex is northwest of Ho Chi Minh City, in an area that was of strategic importance to both North Vietnam and the US.  In this area, approximately 120km of the overall network exists.  Visiting here is one of the “must-do” activities on any visit to Ho Chi Minh City and for good reason.

One of the advantages of coming to Ben Duoc is that the crowds are usually less than in  Bin Dinh.  We had a quiet day, with only about 10 people here at the time of our visit.

Directional signage is not a strong point at the entrance but we found a hut which turned out to be the ticket office.

Ticket prices are two-fold, 70,000 VND for the entrance fee and 20,000 VND for the guide.  You cannot choose to go without a guide as this is mandatory for access into the tunnels.   Besides, at around AUD$4 and AUD$1 respectively, I don’t think it’s a problem anyway.

At the commencement of the tour, a video is played.  It’s old so expect that the quality of both picture and sound is not to 2016 standards, but it serves as a good starting point.

This was the part however that I found the most interesting.  Perhaps I hadn’t thought enough about it, having always had the Australian perspective in my head? Maybe it is that I have had only fleeting real experiences with the communist ideologies?  Or perhaps it was because it was propaganda at its best, making light of an ugly war, in which all sides had heavy losses and ongoing impacts that can never be properly understood or imagined to those who weren’t there?

As images of local women laughing and dancing played, having fought the enemy that day, appeared on the screen I felt uncomfortable. As the soldiers gambled and had fun, and the words in the video referenced them “being heroes for killing Americans”, and “there was always some way to kill Americans”, I squirmed in my seat.

Whilst I have no doubt that opposing forces may have made similar comments, I have never seen this war glorified like this.  The hatred for American forces was still tangible.  There was no mention of any other country in their fight against North Vietnam.

I expected a different perspective, of course.  I didn’t expect sympathy towards the US but I expected a conversation about the impact of the war to those who fought and survived, and to those who had to learn to live again in a changed country.

I’ve sat through countless videos, reproductions and stories from the side of Nazi Germany during the world wars, and listened to stories from different sides.  And whilst they were cruel and had their share of propaganda, I’ve never seen anything quite like this.

Highly strategic and incredibly clever, the tunnels were the way for the Viet Cong to continue their fight to secure southern Vietnam and at the same time to halt their “enemy”, the Americans, from taking Saigon (now Ho Chi Minh City).

Interestingly, the first tunnels of this 250km network were dug in the 1940s when the Vietnamese fought the French to end their colonial rule.

It was during the Vietnam War, however, that three levels of tunnels were dug, going down as far as 10 metres underground. As those fighting against the North Vietnamese armies amped up their fight in the air, these tunnels became homes for many of the locals.

Having now been inside a few of these tunnels, I cannot even begin to comprehend how they lived here.  In the deeper tunnels, they were safe from air strikes, but they could only stay for one hour due to a lack of air!

There’s a reasonable distance to walk from the ticket booth to the commencement of the tunnels.  Along the way is the memorial to nearly 50,000 Vietnamese who fought and died on these lands in both wars.

Once you pass through the memorial grounds, an open-air museum provides some physical insight into the weaponry used during the war.

Here’s one of our tour group getting into the small tunnel.  Entry is by lowering yourself in, feet first, on the diagonal.  It’s a bit tricky and is a testament to the size of those who used these tunnels.

This is my husband, who is 6 foot, creeping along the tunnels in a hunched position.  It was quite tight in some areas for him. 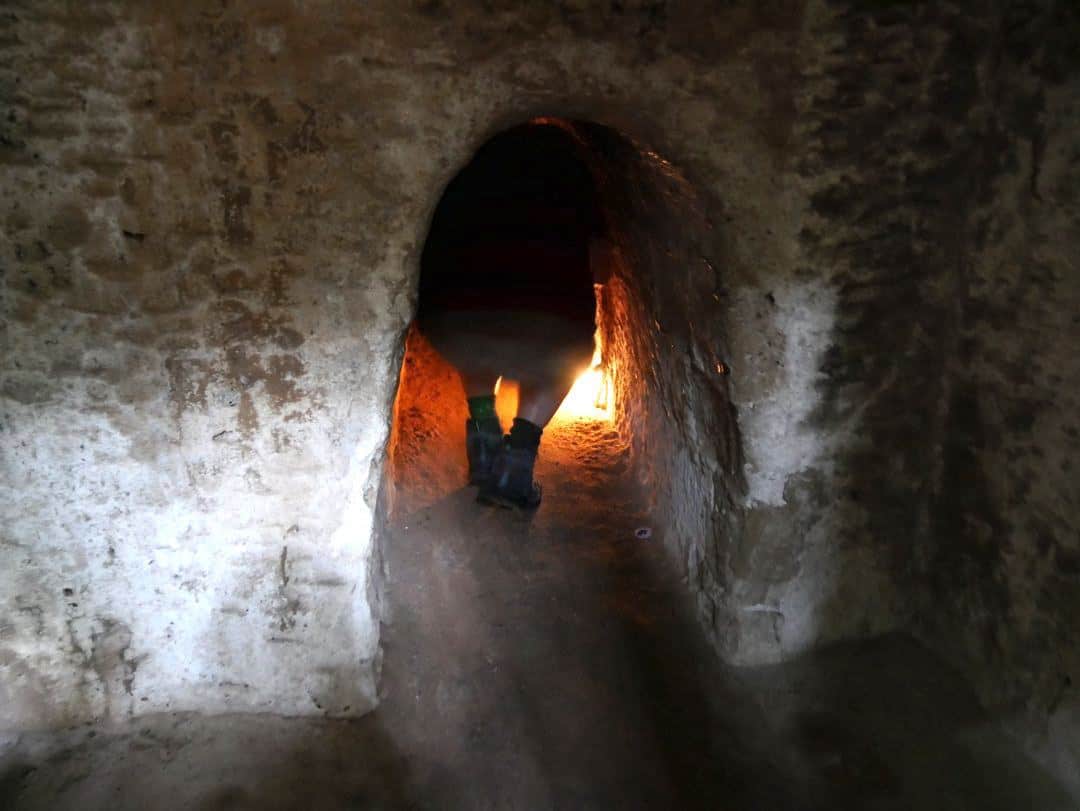 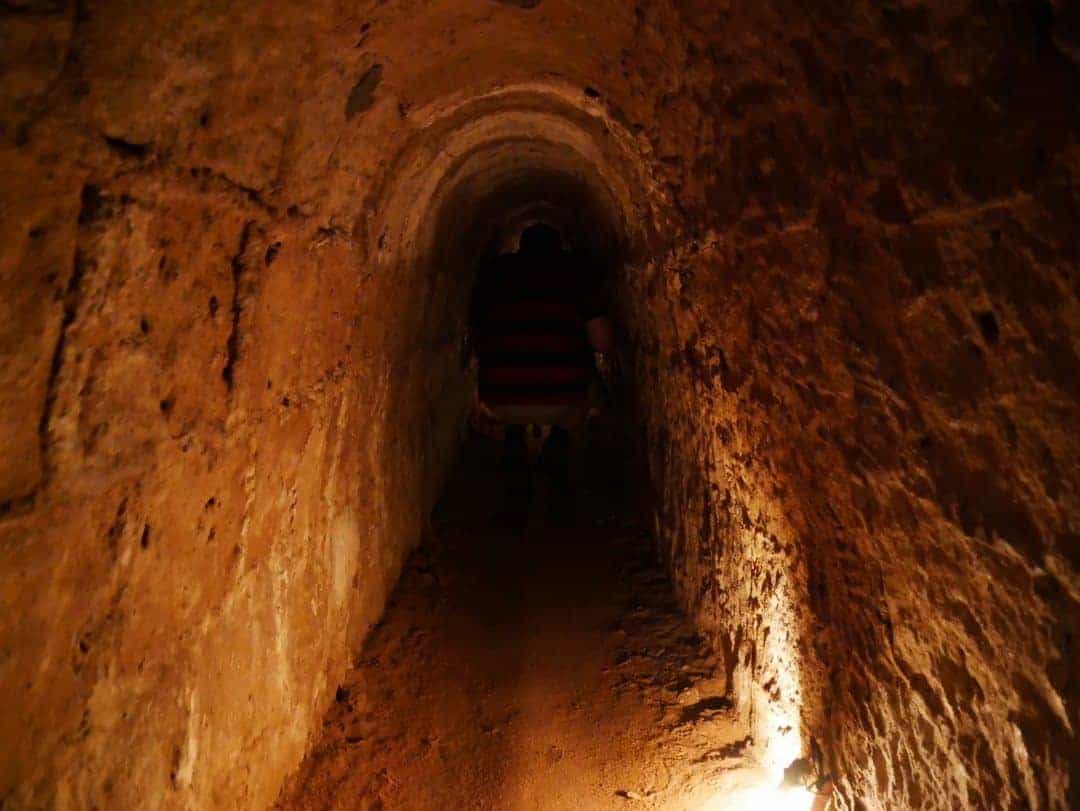 Throughout the trails, there are various bunkers such as these, used as viewing points or covert attack positions.

The US army conducted an extensive air campaign during this war.  This is just one of the examples of where a bomb from a B-52 landed, providing a further understanding of why these tunnels were dug so deep.

The tour and exploration of the tunnels is not a lengthy one, taking around an hour from the start of the video to sitting down with the guide and eating some fresh tapioca at the completion of it.

On completion of the tour, the trail takes you past these examples of some scary looking traps used in the tunnels to capture their enemy.

Make a day of it at the Cu Chi tunnels

We took advantage of our decision to get here early and the lack of crowds to stay a bit longer and eat lunch at the restaurant down on the Saigon River.

It was another example of good Vietnamese food that doesn’t break the budget.  All of this food including two beers cost AUD$14.  I couldn’t get two beers for that at home!

Tips for the Cu Chi tunnels

Would I recommend the Cu Chi tunnels?

In doing my research on Cu Chi tunnels prior to making the decision to go, I read other opinions which are now in contrast to mine.  This is only natural.

We have made a habit of being involved in learning about war history wherever we have travelled, so we were happy to make it a part of our itinerary.

However, whilst I am quite sure I would have been happy at the Ben Dinh tunnels, I was extremely pleased we came to Ben Duoc.  Fewer crowds and less of a tourist focus gave us more time to spend here, and therefore more time to think about and absorb what had occurred in this area.

Our guide did not rush us at all and he was happy to wait for some to get through the tunnels and equally happy to not pressure those who weren’t comfortable into going underground.

Oh and that video continues to stay in my thoughts, pushing me to think more about the events of that war.

It’s a long and tiring day, especially if you catch the local buses, but I am ever so pleased we went there.  Where else in the world can you actually see such an incredible piece of world history that has been so well preserved?

Thinking of going to the tunnels?  Keep reading here for my tip of catching the bus to Ben Duoc on the local buses.  It’s a real adventure