Italy and gelato.  Two simple words that transport me immediately to a wonderful place.  A country where the simplicity and freshness of food are celebrated with every mouthful.  A country rich in natural and historical beauty, and blessed with an abundance of fresh produce and incredible food.

From a food perspective, I’m always torn between naming France or Italy as my favourite country in Europe.  What I can say, categorically, is that authentic Italian gelato is a key part of my love for Italy.

The history of gelato

The university and museum are located within the Carpigiani Headquarters, just outside Bologna.  It is also a manufacturing site for its core product, Carpigiani machinery.  Carpigiani has been manufacturing since 1946 and became the world market leader for the production of gelato making machines.

Through a history of iterations, Carpigiani gelato machines have morphed from humble beginnings to the stainless steel vessels that operate in cafes, gelaterias and fast food chains all over the world. No longer just used for producing gelato, they are now integral in the production of soft serve, yoghurt and smoothies, to name a few uses.

Before I can continue any discussion about gelato, it’s necessary to clear up several myths about an often misused word.

What does gelato mean to you?  Does it mean ice cream?  Does it mean it’s dairy-free? Is it the same as a sorbet?  Can you buy it outside of Italy?  Is it good for you?   There are so many varied thoughts when it comes to gelato so let’s clear up some of the misconceptions, so that you too, can become an expert.

The easiest way to tell if gelato is the real deal is by its colour and the way in which it is presented.  Ever seen it piled up high in containers inside a glass case?  It looks amazing, doesn’t it?  Fluffy looking mountains of colour just willing you to eat it.  It will taste ok, there’s no denying that.  But it’s unlikely to be authentic gelato and will contain other additives to make it last longer and look more inviting.

Authentic gelato is naturally coloured and naturally flavoured.  So banana gelato will more likely be brownish in colour, not bright yellow.  Mint gelato will be white (ish) not bright green and blue bubble gum gelato….well, there just isn’t such a thing.

Gelato is not ice cream as many of us would know it, although many use the word interchangeably.  In fact, the two products are quite different in terms of their ingredients and production.  Gelato is not dairy-free but sorbet is. It can be bought outside of Italy, although non-authentic versions are more common.  As for it being good for you.  I’ll always argue yes, but we’ll leave that to your own opinion.

Air changes the flavour of the fruit and therefore the overall flavour of the product.  Ice cream, which is full of air, will melt much faster than gelato.  Gelato will start to oxidise after one day and will start to turn brown.  This is why artisanal gelato is produced in smaller quantities and usually produced every day.  According to Italian law, it may be kept for up to three days.  Gelato has a much smoother texture than ice cream, contains less sugar, no preservatives and only natural stabilisers.

The Carpigiani Gelato Museum is the only one of its kind in the world.  Central to the museum and all that occurs at the university is the history and creation of artisanal gelato.  Tours like the one we did are conducted regularly and provide insight into the history of gelato making.  The curators of this museum have searched far and wide to bring vintage pieces of machinery into one location, to tell the story of gelato from its early origins.

The pre-cursor to sorbet

Dating back to the 11th century, shrb (sugar syrup) was made using water, sugar and flavouring.  This was heated into a syrup and then placed in ice whereupon it froze.  Sugar then became the key ingredient for making sorbets.

During the 16th century, the concept of freezing became a hot topic, with anyone who knew how to freeze becoming somewhat of a celebrity.  Kings, princes and religious people all actively sought out those with the newfound skill.  During these years,  only nobility had access to gelato.

“In Palermo, ‘we live in the Royal Palace’.  We eat gelatos as big as a steak” [Ippolito Nievo – Garibaldi’s Letters]

The spread of gelato

During the 17th century, gelato was brought to the reach of the people by Francois Procope des Couteaux.  With a knowledge of sorbet making, he opened Le Procope in Paris and sold sorbet to the masses.  Today, Le Procope is the oldest cafe in Paris.

Professor of Medicine Filippo Baldini said in 1775, “Sorbets and gelato are the product of the most refined human intelligence”.  He took this view one step further by prescribing different sorbets for different illnesses, such was his belief that “sugar, salt and cold have positive effects on our bodies”.

In the 1800’s machinery dramatically reduced the costs of making gelato.  Until now, the gathering of natural ice via such devices as snow wells was laborious and expensive.  Ice could now be produced en masse and delivered to households and businesses alike.  The production of gelato exploded both within Europe and all over the world.

Gelato wasn’t always served in a cone.  Today, cones and gelato go hand in hand but up until 1926, gelato was served in cups or sandwiched between two biscuits or wafers.

Each decade brought more and more innovation.  In 1931, the motogelatiera (pictured below) changed the production of artisanal gelato through its automation.  It eliminated the manual scraping and stirring processes, and allowed for the incorporation of air.  This invention opened the way for other automated machines to be invented, further escalating the notoriety of gelato.

Carpigiani responded to increasing consumer demand in the 1960s with the production of large machines, which we would relate to as “soft serve” machines.

50% of the 4000 students who come here each year are from international destinations.  Here they continue to study and learn the science of gelato making, promote the culture of gelato throughout the world and to help entrepreneurs and budding gelato shop owners improve their craft.  Test kitchens allow for experimentation and an on-site shop allows for them to sell their newly developed recipes.

“Cow and the Moon”, a Sydney (Australia) cafe became quite famous in the gelato world after winning the World Gelato Tour title in 2014.  Today, their special recipe is still served here at Carpigiani.

Learning how to make gelato

Our guide Maeva took us through several techniques, ranging from the ancient process using ice and salt, granita and gelato.

Granita is an ice dessert.  With a good supply of ice and a good dash of Campari, we whisked it until it all combined to form a slightly thinner but still textured icy treat.  The Campari nearly blew our socks off so I would probably be a little less heavy-handed next time. 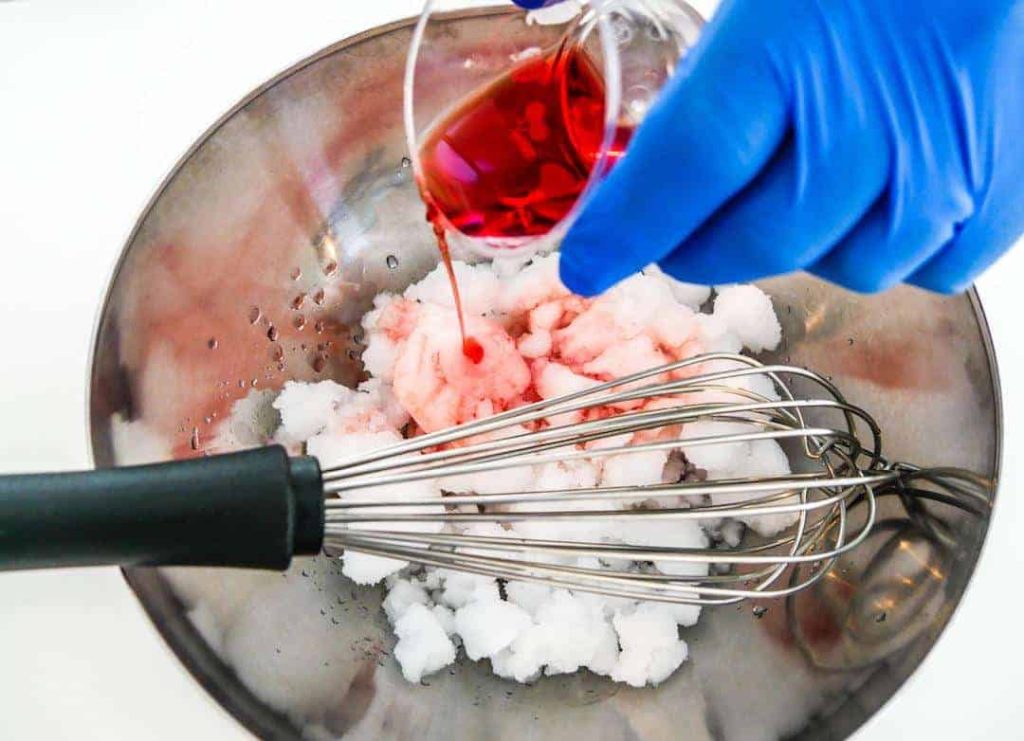 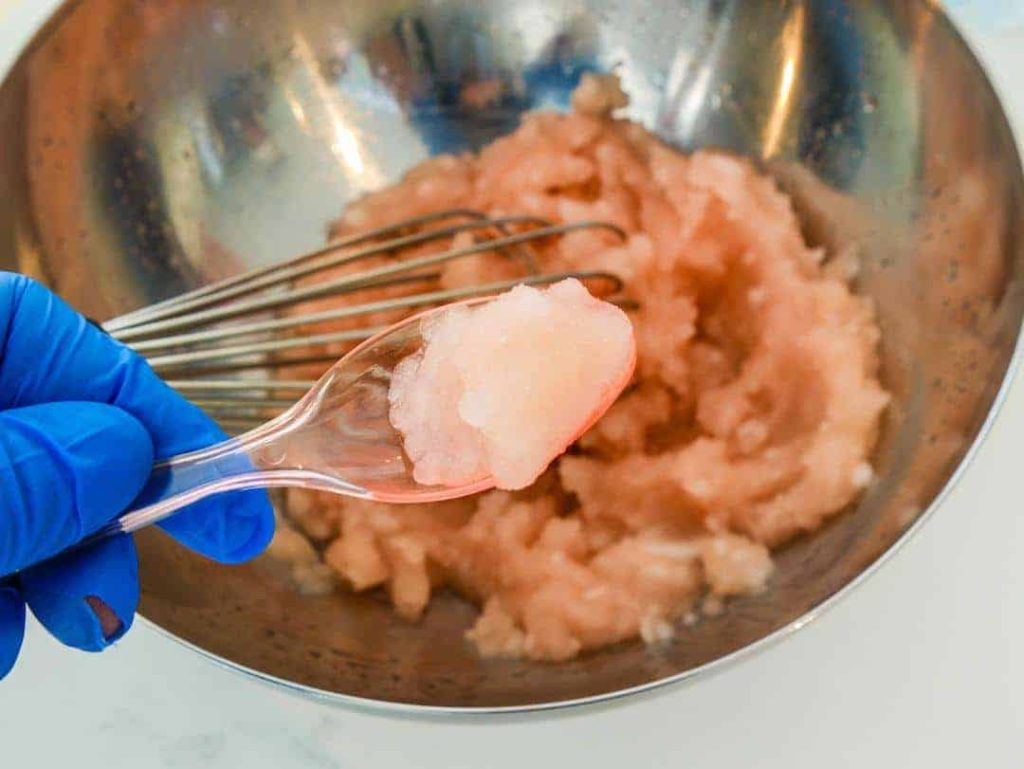 Other members of our tour were responsible for making the fior di latte gelato but we all had a part in taking it from the machine.

The original method of using ice and salt was the basis of this delicious and light kiwi fruit dessert.

The testing of new recipes and experimenting of flavours and combinations is a continual process at the university.  Whilst we were here, we had the opportunity to try a new cold coffee espresso.  As a non-coffee drinker, my husband got to have two.  As a coffee lover, he was more than happy to oblige.

One of the advantages of doing this tour is getting to sample a variety of gelato.  Deciding what flavours to have is always difficult.  Here I could choose whatever I wanted.

It’s a bit of fun and a nice end to a great experience.  We were presented with our certificates from the Carpigiani Gelato University and we accepted them with pride.

There are a variety of gelato making classes and tours available.  Head to their website for further information.

Getting to Carpigiani Gelato Museum and University

The Carpigiani Gelato University and museum are located within the Carpigiani headquarters, in an industrial area, outside Bologna city.

We caught the public bus from the centre of Bologna which was inexpensive and easy.

Kerri and her husband Stirling now regularly travel the world, where eating great food, drinking quality beer and wine, and cooking international foods are integral to their adventures.  You also won’t find them too far away from an epic road trip either, with motorhomes their speciality.

Kerri and Stirling are firm believers that anyone can travel, adapting any situation to suit their own preferences.

To help provide inspiration for future travellers, Kerri creates comprehensive guides and articles that are written in a down to earth, authentic manner.

Kerri is a Digitial Publisher member of the Australian Society of Travel Writers.

Previous Post: « Hilton Malta – the food experience at one of the luxury hotels in Malta
Next Post: The Banksy (Leake St) Tunnel – a hidden graffiti art location in London »