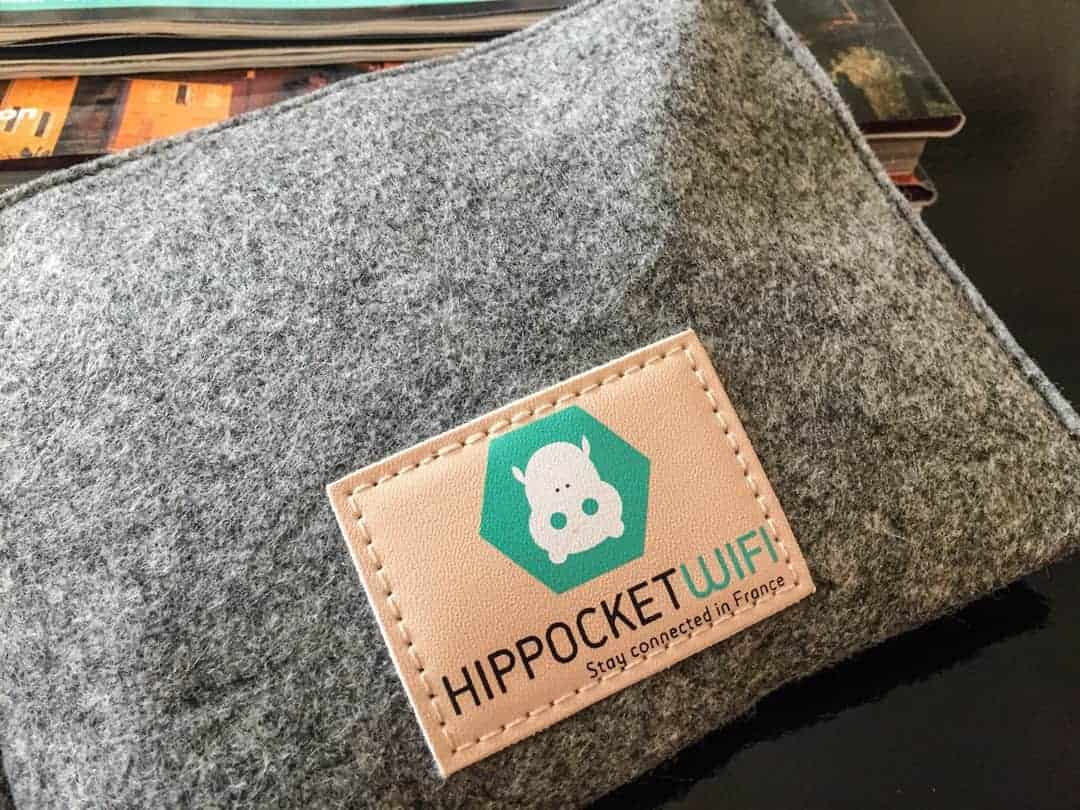 When Hip Pocket Wifi contacted me and asked if I wanted to trial their wifi device, I jumped at the chance.  Access to wifi, good wifi, has become one of the essentials of travelling for us now. When a camp ground, hotel, bar or cafe doesn’t have wifi access it tests my patience.  Equally, I hate tracking down someone in an establishment that actually knows the password, or trying to decipher a password scrawled on the bottom of my bar receipt.

From a work perspective, having constant wifi with us is a must have.

So, was it worthwhile?  Read on to see what I thought of our portable wifi rental experience and whether I’d use it again. 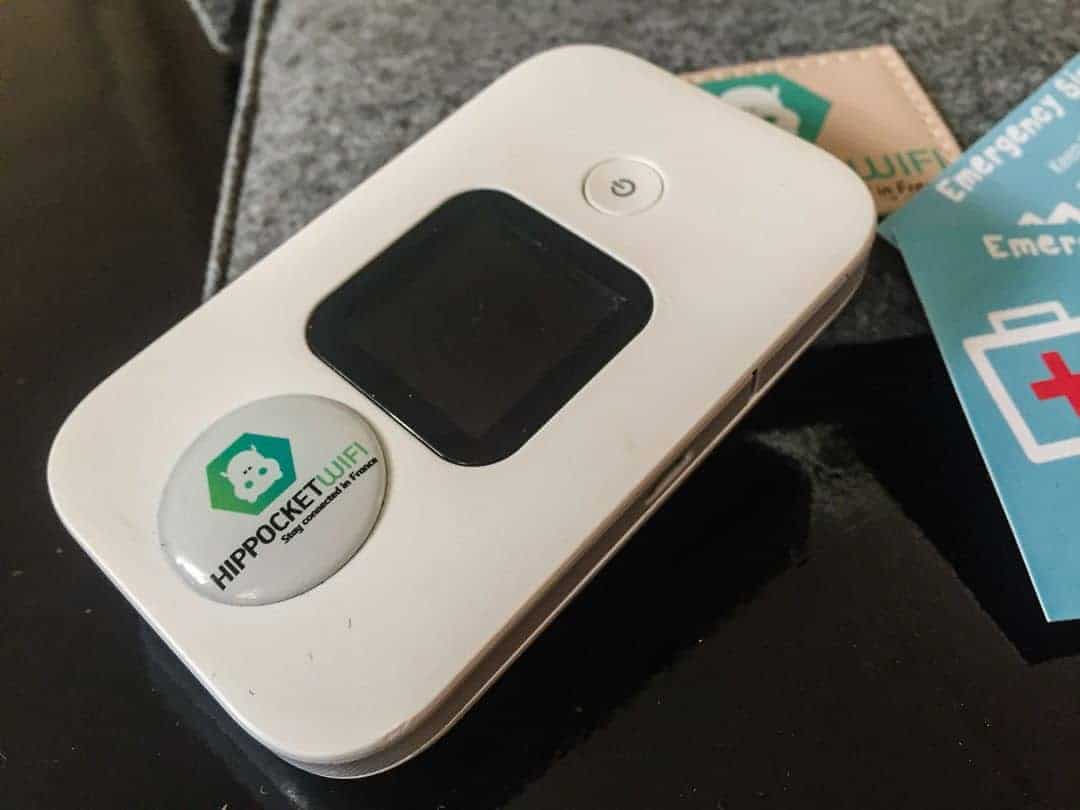 What is Hip Pocket Wifi?

“Hippo”, as our hip pocket wifi became affectionately known, is a portable device that provides roaming wifi access.  It’s your very own hotspot, allowing connection for up to ten devices at the one time!  Connecting to the device is not limited to brand or operating system, so smartphones, iPads, laptops can all access the bandwidth at the same time.

At less than 100g, it’s incredibly lightweight and easy to carry.  It’s also very small (about 10cm x 6cm ) meaning it occupied a very inconspicuous part of my handbag.

This device also arrives with a charging cable (both USB and power).  It has a European pin so remember to bring an adapter if you are from a non-European country.  Two emergency sims are also included along with a brief set of instructions and a pouch to keep everything in.  A return postage paid envelope is also included. 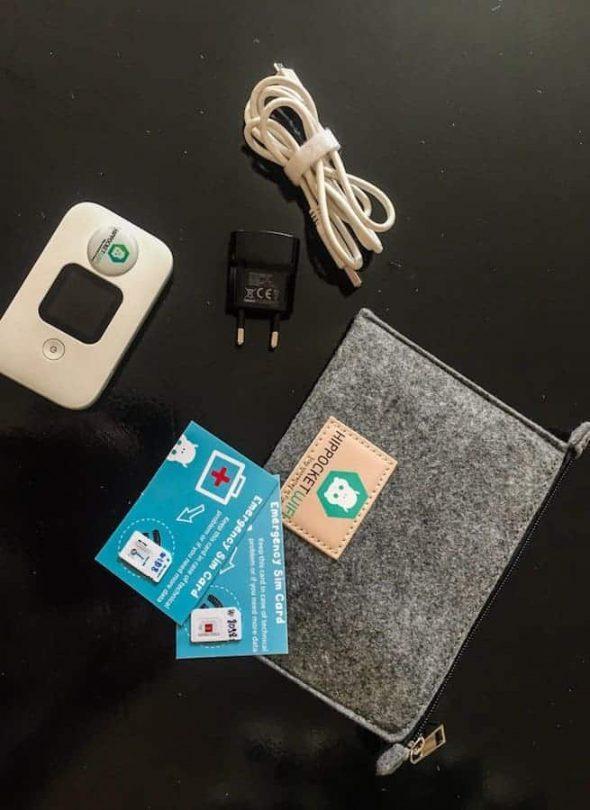 Where does it work?

Portable wifi rental with Hip Pocket Wifi works specifically for European countries, with the best coverage offered in France. Coverage maps can be found here, but if you require access in a country that isn’t listed, it’s always best to speak directly with the company. As a specific example, I used this mobile hotspot in Iceland, after communications with Hip Pocket Wifi indicated it would work.  It might have been spotty in some more remote places, but it was Iceland after all.

In London, the service was near perfect.  In Bologna and in Malta, it was sometimes intermittent, but nothing that would make me think poorly of this device.  On these occasions, I would suspect that others using different wifi providers would have had a similar experience.

In terms of speed, nowhere will be as fast as if you are travelling in France where 80% of the French population is covered with a 4G network.  Here, speeds of up to 100 Mbps can be achieved.  Elsewhere, where 3G is relied upon, the transfer rates are much slower.  Whilst I never experienced anything like 100 Mbps, there were only a few times when the speed would drag, or pages failed to load.

How does it work?

This is perhaps the best part of all.  It’s super easy to set up and use, and if you are technologically challenged, fear not.

The initial set up is simply a matter of turning the hip pocket wifi on and then looking for the network on your device.  The instructions that are included in the pack note the network name and password.  They are also written on the back of the device and also on the front screen, meaning you will never be in a position to lose them.  A great idea!  After entering the password, your device will connect to the roaming wifi.  This same process is followed for additional devices you wish to add.

This is the best part.  Hip Pocket Wifi is based in Lyon, France, but ship to anywhere in France, Europe and the USA/Canada. This means you can provide them with the address of your hotel, hostel, Airbnb, a friend’s house, or even your own address (to arrive before you leave the country).  We had ours sent to our London base where it was ready and waiting upon our arrival.

Of course, if this doesn’t suit, then you can make arrangements to pick up the device from a range of locations in France and Europe including post offices.

How much does it cost?

With the ability to connect up to ten devices, this is a great opportunity to use with groups of friends and family and perhaps even share the cost.

Where can I check my data usage?

There is an option to check your ongoing data usage on the device itself.  Alternatively, you can download the Huawei HiLink (Mobile Wifi) app.  This will ensure you are always aware of how much data you are using.  There’s no need to worry about going over as you will not be charged any additional fees.  The rate of data transfer will just be slowed down.

How do I return it?

If the pickup process wasn’t easy enough, the return process is even easier.  A return, postage paid envelope is included in the original package.  At the end of the hire period, all components (device, emergency sims, cables) are simply placed back into the protective pouch and inside the envelope.  Simply put the envelope in a post box and it will find its way back to Hip Pocket Wifi.

I was mindful to keep telling myself that I had to remember to return it.  However, if you forget, and let’s face it, it’s possible when you are just focused on heading home, all is not lost.  The device can still be returned but postage will be at the individual’s cost outside of France and Europe. 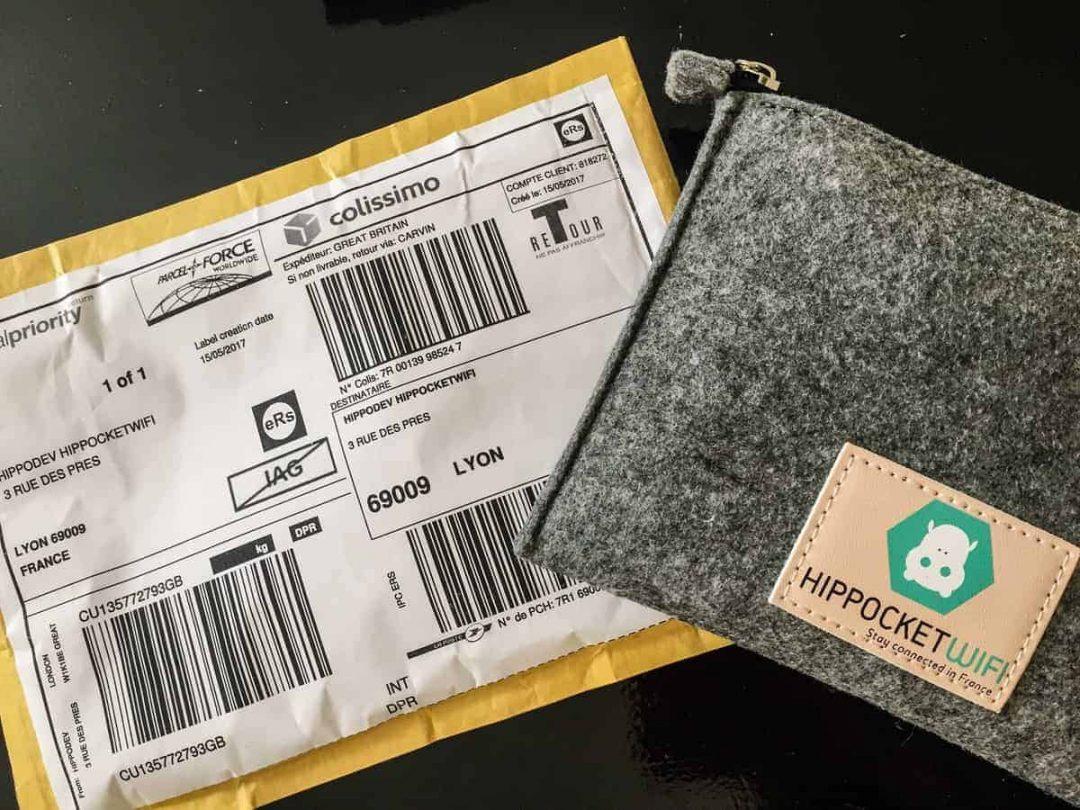 What did we use it for?

My plan allowed for me to use data up to 1GB a day.  When we are working at home, 1GB probably isn’t enough.  But, when we’re on the road, 1GB is more than enough.  This allows for almost continuous web browsing during the day plus a hefty dose of video streaming, mapping and emails.  Of course, if you plan on doing more than this, there are unlimited data plans available.

Mapping apps have become another key part of our travel, especially when we are on road trips.  Whilst I did use the wonderful offline maps app Maps.me, with internet access, we found ourselves using Apple Maps and Google Maps a whole lot more.

I am a tech junkie and love reading and searching for stuff online so needless to say, my internet searches were continuous as well.  Whether it was for looking for something for our trip, or just using it as a trivia option whilst having a beer in a pub, having access to the internet was awesome.

Of course, I was also working, so being able to regularly post Insta stories, Instagram images, Facebook and Twitter posts were hugely important to me.  It also allowed me to continue to use iMessage, for communicating with various people.

We emailed, downloaded apps, looked up directions, made bookings online, Facetimed and posted our trip on social media all via one simple device. 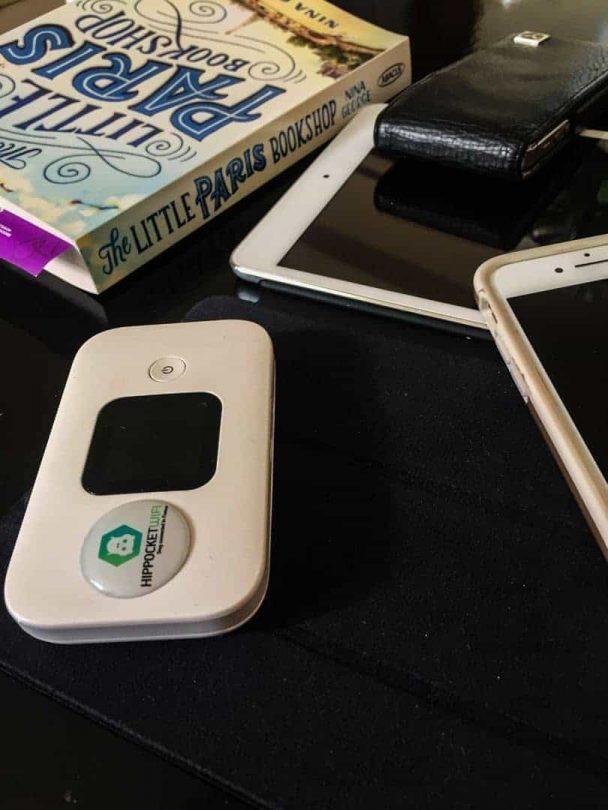 Where could it improve?

To be honest, there’s not much to say here.

Hip Pocket Wifi offers peace of mind from the beginning of your portable wifi rental period right through until the end of your hire.  With easy delivery options, great rates and plans, great speed and coverage, it’s definitely something we would use again on our travels to Europe.

Hip Pocket Wifi provided us with a device to trial during our recent travels in Iceland, UK, Malta and Bologna.  All opinions and recommendations are based on our continued use of this product over a 42 day period, allowing us to effectively test serviceability and network coverage over different countries.

We tested this product in large cities like London and Reykjavik, on the island of Malta, and in small regional areas of Italy and remote locations of Iceland.  As mentioned, some locations suffered from intermittent service but on the whole, this device worked exceptionally well.

Following our successful trial of Hip Pocket Wifi earlier this year, we once again made it our portable wifi of choice for a trip to France in September/October 2017.  The circumstances were slightly different this time, given we wouldn’t be travelling to multiple countries.  With the strong assertions made by Hip Pocket Wifi that it had exceptional coverage in France, we were keen to test this out.  We were also wanting to test it further under some different travelling conditions, specifically on a barge on the Canal du Midi and in a motorhome.  So did it stand up to all the hype?

The wifi in France has definitely been the best coverage of anywhere we have taken the “Hippo”.  It has become our dear friend, always with us making our lives easier when on the road.  The 4G coverage was strong and usually only went to 3G in small, rural areas, which I can’t complain about.  We travelled approximately 2,500km throughout the south-west of France and always had service.  There were no outages at all.   This is quite remarkable considering some of the locations we were in.  From the canal to very small towns, to farms in the middle of nowhere, the service continued.

On the Savannah barge on the Canal du Midi, service was so great that I allowed other guests travelling with us to access my device as well.  The American visitors could not believe how easy it was to use and how great the connection was, given they had tried to connect unsuccessfully into the barge’s wifi many times.  Whether we were on the barge or heading off to a city for a day trip, the portable wifi came with us every time. 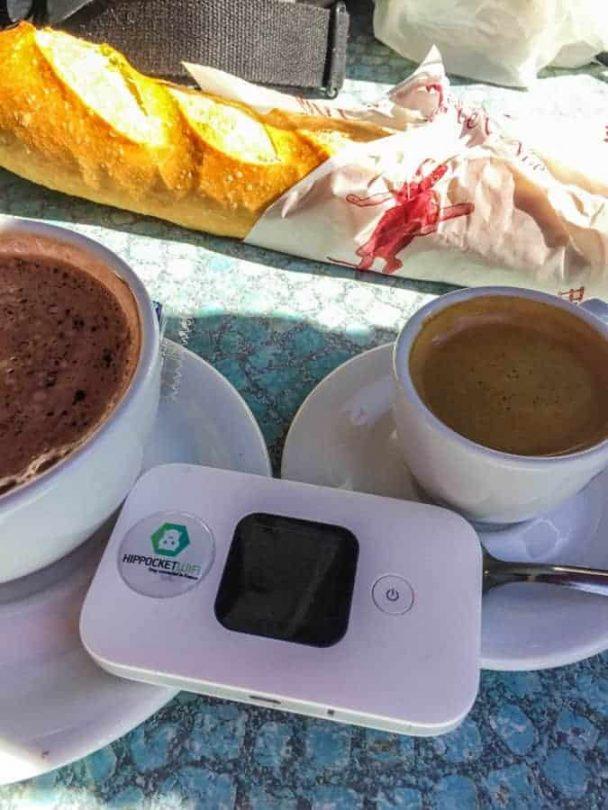 We also travelled on several trains, both the SNCF regional trains and the high-speed TGV trains.  Surprisingly, none of them had wifi on board.  With a two hour trip and a 6.5hour trip, the “Hippo” once again came to the rescue.

Onboard the motorhome was when the “Hippo” really excelled.  Often in extremely remote locations, where public wifi was not an option, and at times in completely uninhabited areas, the wifi worked, every time.  At night, we were both streaming YouTube videos and movies simultaneously,  and of course, during the day we were using it constantly for maps, Google and social media. 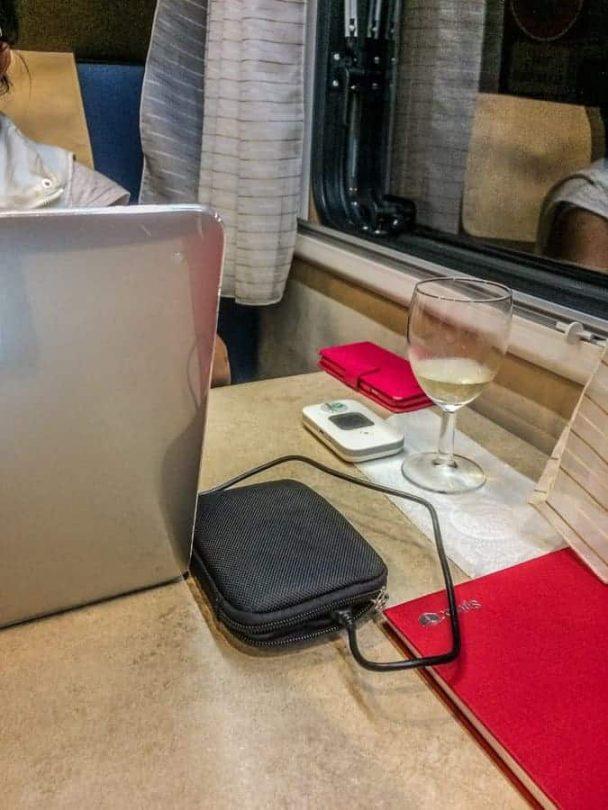 Because I had used the device before, I was also more aware this time of the need to keep it charged.  On the barge we had the usual electrical adaptor and in the motorhome we kept it charged via the 12v charger.  Once again, at the end of the trip, we simply placed all the equipment back in the return, postage-paid envelope and placed it in a letterbox at the train station.

I continue to tell everyone that I meet who is travelling to France, or Europe, that this is a wonderful piece of equipment to have.  I know it’s certainly my wifi of choice for future travel.

Hip Pocket Wifi provided us with a mobile device for purposes of trial and review.  All editorial content is completely independent and all thoughts and opinions are our own.  We just happen to love our Hippo!