What to do in the Three Cities of Malta

Sitting directly opposite Valletta and alongside the Grand Harbour are The Three Cities.  Collectively, Cospicua, Senglea and Vittoriosa make up The Three Cities, one of the oldest areas of Malta. It was here that the Knights of St John first settled, and as such many of the buildings and forts are older than what you would find in the nation’s capital.

Visitors to the Upper Barrakka Gardens, usually to watch the Saluting Battery, can see across to the Three Cities.  Instead of just being content to see them from afar, we’ve put together a list of what to do in the Three Cities to entice you to add it into your Malta itinerary.

The Three Cities are comprised of Birgu (Vittoriosa), Cospicua (Bormla) and Senglea (L’isla), small neighbouring areas that collectively showcase the traditional urban areas of Malta.  Like many of the towns in Malta, these three are also known by different titles.  It’s the remnants of their mixed and difficult history of imperial occupation and rule.

Despite being so close to Valletta it carries none of the hype nor the traffic (vehicular and pedestrian) of its neighbour.  Here, the laneways give way to locals going about their business. The streets are peaceful and full of wonderful buildings, stone steps and hidden alleyways, many leading down to the water.

Take the time to go for a walk and you’ll be delighted by the friendliness of locals and the quiet beauty of the streetscape.

Day trips to the south of Malta

The doors are pretty amazing here too.

Most of Cospicua has been rebuilt as it was damaged greatly in World War Two. Cospicua is a double-walled city built around a dockyard constructed by the Knights in 1776.

The dockyard has continued to play a very important role throughout the history of this city.  Today, the dockyards are being restored, bringing back to life the former glory of this area, whilst protecting a significant piece of Maltese history.

The fortifications of the city, known as the Santa Margherita Lines and Cottonera Lines remain intact, if not in need of some maintenance and restoration in parts.  It’s amazing that these survived the bombings, especially since much of Cospicua was damaged.  As you walk around the streets, keep a watchful eye for buildings that have clearly been restored.

These were built as barriers around the cities and contain very high walls and bastions.

Senglea also suffered great damage during World War Two, with approximately 75% of all buildings destroyed.  Senglea is one of the best places to take in the views of Valletta.  Walking the streets is a must here.

Right on the end of the peninsula is the Gnien il-Gardjola Gardens and the stone guard’s entry, Il-Gardjola.  Years ago this served as part of the military’s defence of the harbour.  Like many of the gardens in Malta, these have a lot of stone and concrete and sit above one of the city’s many forts.

From the Il-Gardjola though, the views across the harbour to Valletta make it a worthy stop.  Be sure to get right out into the watchtower to take a photo.

All entrances to these cities are protected by huge walls and bastions.  The St Michael Bastion has this role for Senglea. 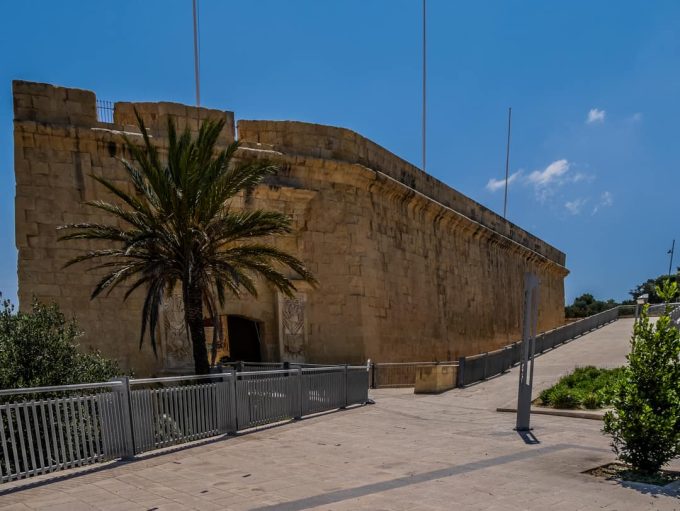 Birgu or Vittoriosa, right on the end of the peninsula opposite Valletta has had an important role in the Maltese military history.  It had strategic importance for many of the invaders who wanted possession of Malta.

This city also has a healthy selection of beautiful buildings and gates that have been formed into the fortified walls.

Saint Angelo Fort has long protected the city and the harbour from invasion, and the entrance to this fortified city is via the Couvre Porte, a gate in the walls.  It was certainly a difficult place to get into.  Tours can be conducted through the fort and once again, it provides a wonderful view across the harbour.

Whilst the age of St Angelo Fort is unknown, it is extremely old.  Like most things in Malta, the Knights took a liking to it in the 1500s when they arrived here.  It was further strengthened and additions made.  During French rule, the fort was the headquarters of the French Army.  Later, it became a bolthole in the British Military’s portfolio, with further upgrades made.  Vacated by the British in 1979 and today operates as a major attraction in Malta for visitors to the area, keen to learn about the country’s history.

The Notre Dame Gate is the main gate of the second line of defence, the Cottonera Lines.  Not only were these walls built for defensive purposes but some, like the Notre Dame Gate, are architecturally impressive also.

The 17th-century St Lawrence Parish Church, once used by the Knights dominates the street on the waterfront at Birgu.

Walk the streets of Birgu

I keep saying it because it’s a really important thing to do in the Three Cities.  Sometimes it feels as though you have this whole beautiful area to yourself.  Watch for women poking their heads out their front doors to stare at you as you walk by.  Always give them a smile and say hello and they will return the favour.  If you can’t do it in all of them, find the time to do it in at least one.

Visit the Malta at War Museum

At Couvre Porte in Birgu, old air raid shelters can be found.  It is one of the largest wartime areas with approximately 1.5 kilometres of corridors, all with shelters.  The museum itself stands over the top of an original air-raid shelter.  This can be visited as part of the tour.

The walls around the complex also contain shelters.  It’s been turned into a landscaped park area now so perfect for having a break after heaps of walking around the Three cities.

Need to know about the Malta at War Museum

This is a beautiful place to spend time.  Walk along the promenade or stop for a bite to eat at one of the many restaurants and cafes here.  There is plenty of eye candy here when it comes to massive yachts.

Where to eat in the Three Cities

Eating along the water is something we love to do.  Don Berto’s resides up on the upper deck of the building that lines the waterfront at Vittoriosa.  The views of the very expensive yachts in the foreground set the tone for a relaxed lunch.

Don Berto’s feels more modern, less traditional which is supported by a more extensive menu than we had been used to in Malta.  In saying this, the food was still of very good quality and great value.

How to get to the Three Cities

There are several ways to get to the Three Cities.

By bus to the Three Cities

The public bus service runs from Valletta to the Three Cities.  For accurate route information search their website.

By water taxi to the Three Cities

I love getting onto the water whenever we can.  Apart from it being a fun way to travel, it offers such a different perspective of the cities around you.  Water taxis run all day and take under 10 minutes.  Valletta Ferry Service and  A&S Water Taxis also operate.

If you are in Birgu, the local boats called dghajsa operate to get you across to Senglea.  Add this to your list of things to do in the Three Cities.  It’s good fun and it’s very local!

By car to the Three Cities

Parking is less of a problem here, so if you are driving you will not have the hassle like you would in Valletta.

Getting around the Three Cities

There’s the dghajsa if you want to get from Birgu to Senglea, there are buses and there are your own two feet.  All are suitable for getting around these areas.

By electric buggy around the Three Cities

After doing quite a bit of walking,  we decided to get on board with the Rolling Geeks a small tour company using electric buggies to navigate the small streets.  Apart from it being quite fun, taking a tour like this is useful for many reasons.

Need to know about electric buggies

The route is 18km.  If you drive without stopping at all, the trip will take around 1.5 hours. Most people will usually take much longer though.

You can’t get lost due to the pre-determined route.  The buggy will drive you around a set route and knows where to return you.  The admin team of Rolling Geeks always know where you are and can communicate with you if help is required.

A briefing is provided prior to taking the buggy out and someone from Rolling Geeks will drive behind you for about 1km just to make sure you have the hang of it all.  A drivers license is required to hire the vehicle.

Everyone gets a bottle of water to take with you which is a thoughtful addition, especially during the hotter months.

Where to stay in the Three Cities

There are many places to stay in the central areas of Malta. We’d recommend staying in Valletta if you want to remain central.   We stayed at the Hilton Malta, at St Julian’s, providing easy access to everywhere we wanted to go without being in the busy city.

Tour of the Three Cities

We still find travel resources like these useful. All may be purchased online.

4 thoughts on “The Three Cities of Malta: Birgu, Cospicua and Senglea”