The Grand Boulevards is a term given to an area of inner city Paris that underwent a huge public works program.  It was initiated by one of Napolean III’s men, Monsieur Haussmann, during the mid 1800s.  At the time, Paris was known to have overcrowded neighbourhoods, disorganised and narrow streets, and incredibly poor infrastructure (eg sewerage).

Haussmann had grand plans for this area, which included demolition of these neighbourhoods, widening of streets and improvement of services.  Whilst Haussmann didn’t get to see his plan through, it was continued by others and the distinctive layout of inner-city Paris is a result of his work.  This city layout is immediately obvious from higher vantage points such as the Eiffel Tower or the Arc de Triomphe.

Check out this 3 day Paris itinerary

I don’t know about you, but when I think of Paris, one of the instant pictures I get in my mind is of the Parisian streetscape.  You know the one that has all of those beautiful apartment buildings, with the second story balconies, and the slate coloured, slanted roof, with dormer windows.

The building walls are usually a beige, or sandstone colour.  If I look deeper into my mind, I see chimneys all along the rooftops, and there is, for some reason, always a lazy French chat (cat) sunning itself on a window ledge.  If I push my mind further, I also can see the secret interior courtyards that only those privileged to enter through the front doors can see. 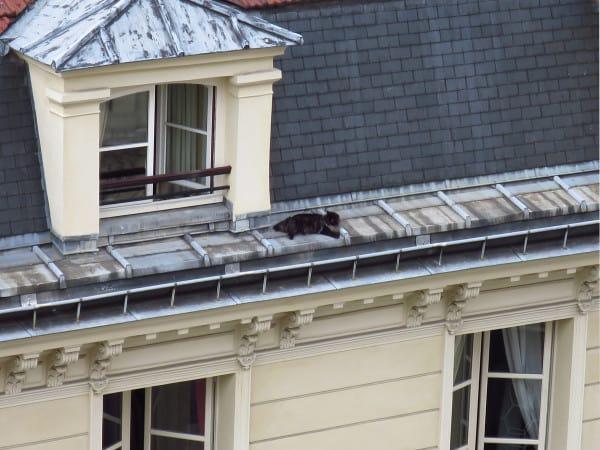 The French Chat (cat) sunning itself

These buildings are Haussmannian.  It seems Haussmann had a very strong and enduring influence on the architecture of Paris.  In thinking through his overall town plan, Haussman warmed to the simplicity and consistency of these structures, meaning today that the inner city of Paris is also free of ugly high rises.  He introduced standards for maximum height, roof pitch, and the width of the streets to ensure that the houses were not re-creating the previously crowded neighbourhoods.

All Haussmannian buildings are made from cut stone.  They have a ground floor and a basement.  A specific identifying feature of these buildings is a second floor balcony, always with an elaborate wrought iron balustrade, and feature decorative edges to the external windows.  The fifth floor (the top level) also has a balcony, although not as fancy as that of the second.  In the roof, the dormer windows allow light and air into the attic.

The Grand Boulevards are anchored at one end by Opéra Garnier and run for quite some distance down to Strasbourg-St-Denis.  They are easily walked, and the large number of cafes and restaurants along the way will make the walk even more enjoyable.  If the walking gets to much, there are a number of Metro stations dotted along the way.

Here’s a few of the key places to see and visit along the Grand Boulevards.

The Boulevards are a shopper’s paradise with the Grand Magasins (department stores)  based here. Printemps and my favourite, Galleries Lafayette draw large crowds every day.

The beautiful Printemps building on the Grand Boulevards

If you haven’t been to Galleries Lafayette, it’s a must see.  As a department store, it offers great shopping, but for me, it’s the stunning building that draws me in.  Outside it’s gorgeous, but inside, it’s another world.  Oh, and the food gallery has enough to keep me interested all day.

The French do pastry so well

All along the Boulevards are incredible feature doors.  They are huge, grand entrances to the courtyards behind, and once again feature elaborate stone work around the doors and arches.  Here are just a few of my favourites.

So many amazing doors along the Grand Boulevards

One of my favourite doors

Beautiful feature stone around the doors

Another fascinating find along the Boulevards are the Les Passage Couverts. Exposed to the Grand Boulevards only by an entrance way, these undercover passages are quite often missed.  But if you can find them, the Passages Jouffrey, Verdeau and Panoramas, they offer a tremendous insight into the world of Parisian shopping from an era long gone.

These passages, often with intricate glass rooftops overhead to let the light in, that you can lose yourself in second hand bookstores, search for a collectible stamp or coin, and drink tea from a teacup in an old tearoom. 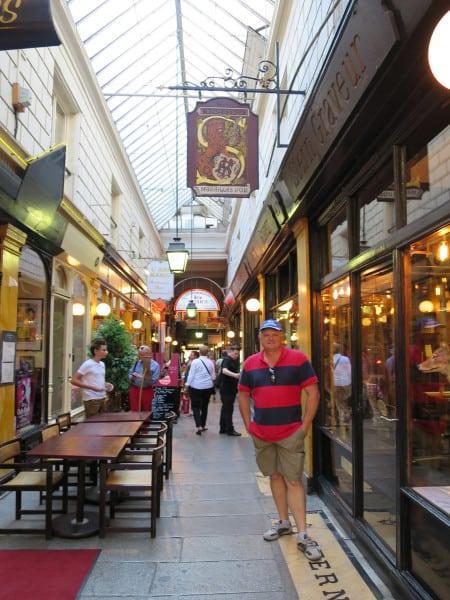 Inside the Panoramas Passage off the Grand Boulevards

Continuing the theme of beautiful architecture is the building that houses Les Grand Rex.  Built in 1932, this art deco building is known as the wedding cake due to its distinctive layers.  Today, it is a cinema and the largest venue of its kind in Europe.

As you approach the suburb of Strasbourg St-Denis, the glamour of the Boulevards starts to subside.  In this area, it is strictly working class, with some of the “night time” workers (if you get my drift) seemingly still on their shift.  It’s a seedier part of town that’s for sure.  Here many of the once beautiful passageways are not used, save for a storage place to boxes of cheap merchandise that are being sold in the stores here.

But, you could also be forgiven for thinking that a replica of the Arc de Triomphe was sitting in front of you.

This is the Porte St-Denis, a monument erected on what was once a gate to the city of Paris.  Today, it’s also a bit of a haven for the homeless.

Further down the street is a similar monument, the Porte St-Martin. 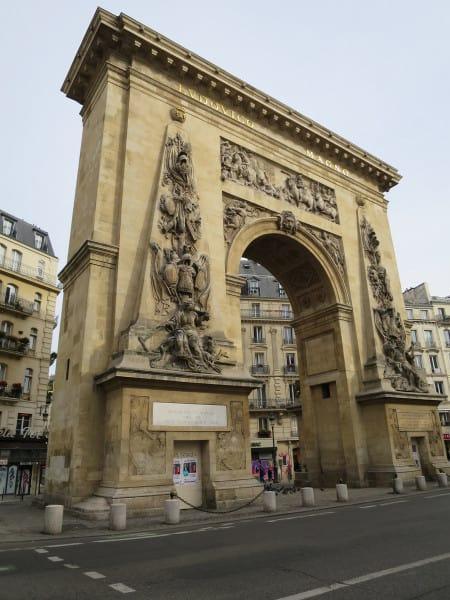 As you are walking the Grand Boulevards, be sure to pay close attention to the side streets as well.  You just never know what iconic feature you might see.  For us, it was the beautiful Sacre Couer that popped up as we crossed a side street.

There is plenty to do in this area.  Shopping, admiring the beautiful (and quintessential) Parisian architecture, or just propping up a chair on the footpath and engaging in some people watching. Or, if night time is more your style, then this area comes alive with theatre, cinemas and clubs galore.  Whatever your choice, there’s plenty of offer here.  Or, if you want something a little more unusual, there’s also plenty to be found in Paris.

Hi, we are Kerri and Stirling. We travel for amazing food, cold beer and great wine.  We love a touch of luxury but motorhome road trips are our great love.