Must visit cities in Belgium

Belgium is a very small European country but it packs an enormous punch.  I’d only been to Belgium once before, and it was relatively fleeting.  We had been in a Kombi and were making our way back towards Calais to catch the ferry to England.  There were enormous strikes going on at the port and significant delays were inevitable.  After 12 weeks of driving through Europe, we needed to get back to London to start our new jobs.  So Belgium was the loser that time around as we really couldn’t stick around.

This time we were back in our motorhome (albeit a whole lot more luxurious than the Kombi)  and spending some quality time in Belgium seemed like a good plan.

Starting in the south, we navigated our way through 11 amazing cities, all of which I loved.  But, I loved some more than others.  By the time I crossed the border and made my way back to France, I had a definitive list of my top 5 most beautiful cities in Belgium.

You won’t see any of the big names here, like Brussels and Antwerp.  These are the small towns, the ones that most people haven’t heard of, but the ones that you’ll be so disappointed if you miss.  They are also some of the most under-rated cities in all of Europe.

This is a quick summary of these towns.  For a more detailed understanding of what they have to offer, keep reading all the linked articles that I have placed under each town.

Leuven sits in the shadows of the larger city of Brussels, trying to keep the secret of this beautiful town to itself.  It’s a university town, hence its reputation for having the longest bar in Europe!

It’s an incredibly easy city to get around.  Leave the cars on the outside of town and take a bike in.

For more details on this beautiful town, check out this article: Why Leuven is a must visit town.

Leuven is 29km outside of Brussels.  Regular trains connect Brussels to Leuven on a journey that takes approximately 13 minutes. 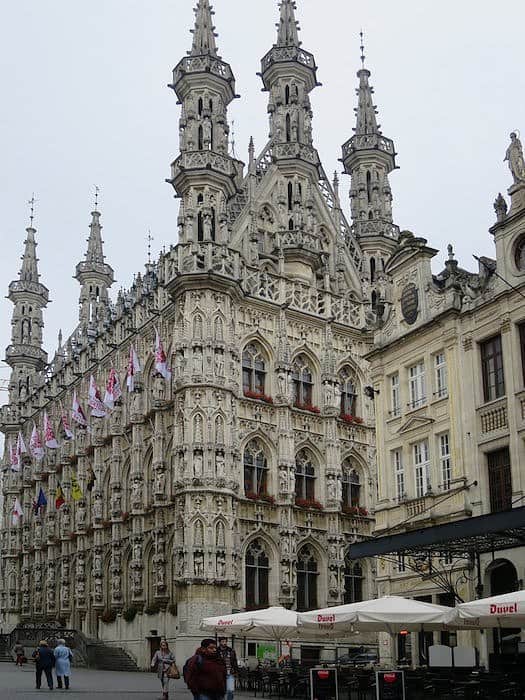 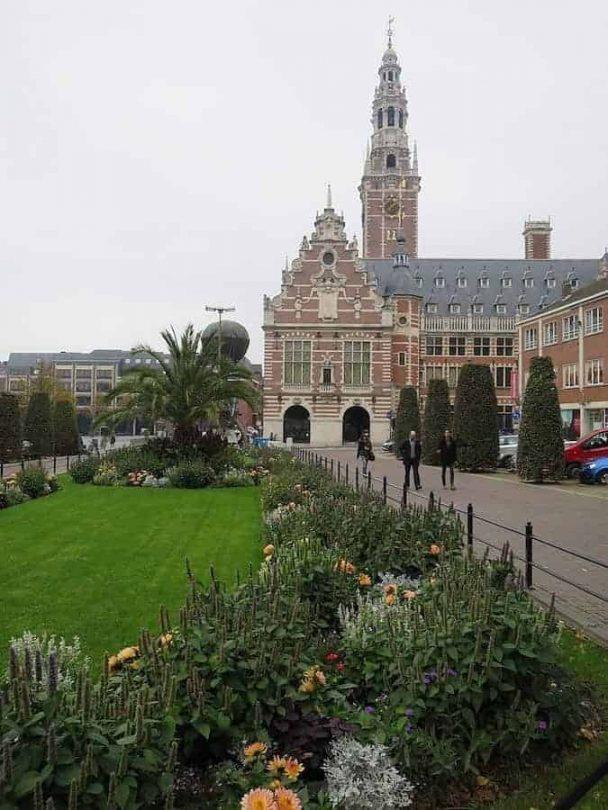 Closeby to Leuven, you could visit the two towns in the one day if time was an issue.   It has one of the most beautiful old-world bequinages and one of the oldest (still operating) breweries right in the heart of the city.  With its beautiful Gothic churches, Grote Markt and plenty of great places to eat, it’s a must visit city.

Mechelen is 31 km outside of Brussels and only 25km from Leuven.  Driving between both cities is easy enough.  The back roads are the most scenic, but they are also typical of regional Belgian roads (terrible!) so the drive is a little slower than normal.  Trains run regularly and take around 30 minutes.

If you didn’t know that Dinant was the home of Adolphe Sax, the inventor of the saxophone, you would instantly make the connection upon arrival.  The sax is celebrated all throughout this beautiful riverside city.  With an incredible abbey, a citadel overlooking the city and underground caves full of all sorts of interesting natural structures, it’s definitely a city that is worthy of your time.

Explore what the city has to offer in Dinant: the first of many beautiful Belgian towns

Dinant is 97 km from Brussels and whilst trains run here, taking about 1 hour 30 minutes, it’s probably best as part of a road trip.  We drove from Dinant to Leuven, then Mechelen. 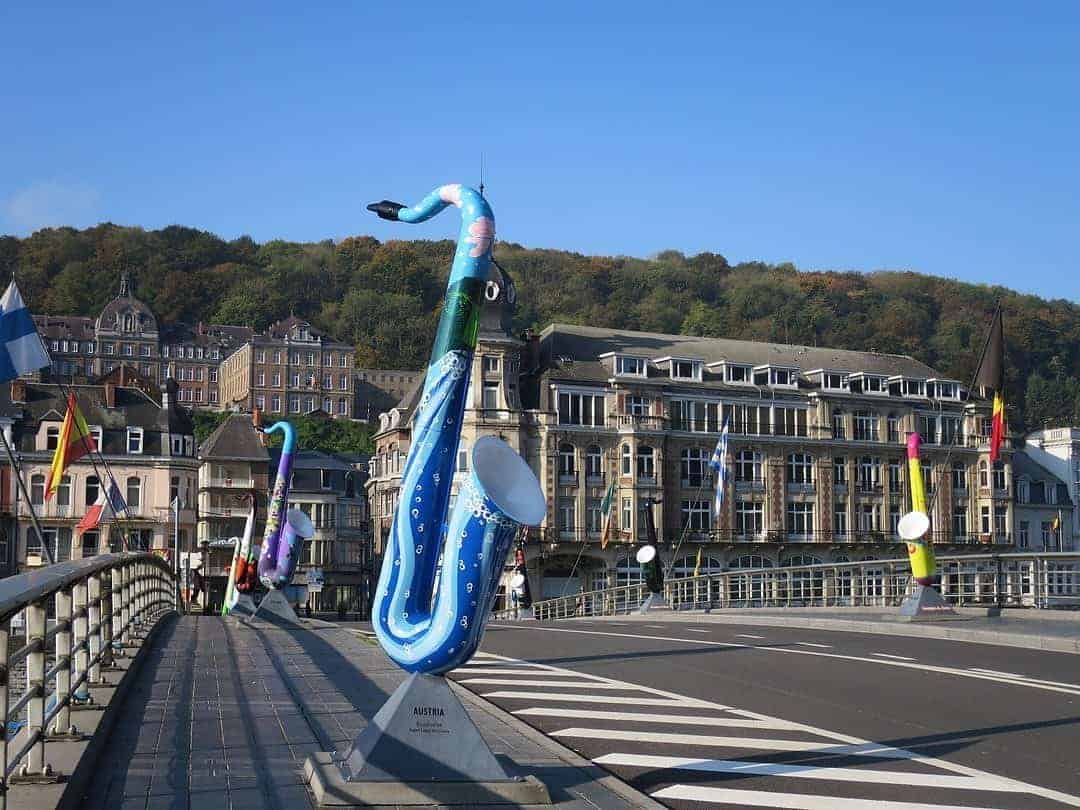 Ieper (or Ypres) is the city to visit if you are interested in exploring the history of the world wars.  Ieper was a prominent city during these times and was actually destroyed several times over itself.  Today, it is the home of some of the more significant memorials and cemeteries honouring those who served and those who fell.

Known for its architecture, especially the magnificent Cloth Hall, (itself a casualty of World War I), the town square showcases many beautiful Gothic buildings.

It also features the only daily service of the Last Post.  Every evening at 8 pm, the Menin Gate is filled to overflowing with visitors coming to show their respect to those who served and continue to serve in world conflict.

Ieper is closest to the French border.  If you don’t have a car, Ieper is only 32km from Lille Eurostar Terminal, making this a possible transit option.  Or, it is 72km from Bruges, where trains connect the cities in one hour 30 minutes.

I often think that Ghent is my “save the best till last” city, but that’s probably not fair to the others above, which I absolutely loved too.  But, Ghent is special.  A little larger than the other cities I’ve mentioned, it has a bit more of a city feel, without being too big.  It’s the replica of Bruges, without all the hype.  It is probably Belgium’s most underrated city of them all.

Built on the canals, it has a cosmopolitan feel about it, especially in summer. The waterways are lined with people enjoying the outdoors, sunning themselves on decks whilst drinking the ever-present (and ever so good) Belgian beers.

The Graslei waterfront area was one of my favourite places, as was the Beguinage and the Granvensteen Castle.

If you are looking to visit Ghent, check out Why you should visit Ghent: Belgium

Ghent is 64km outside of Brussel or 47km from Bruges.  Parking is easy in Ghent as is catching a train from either of the two larger cities. 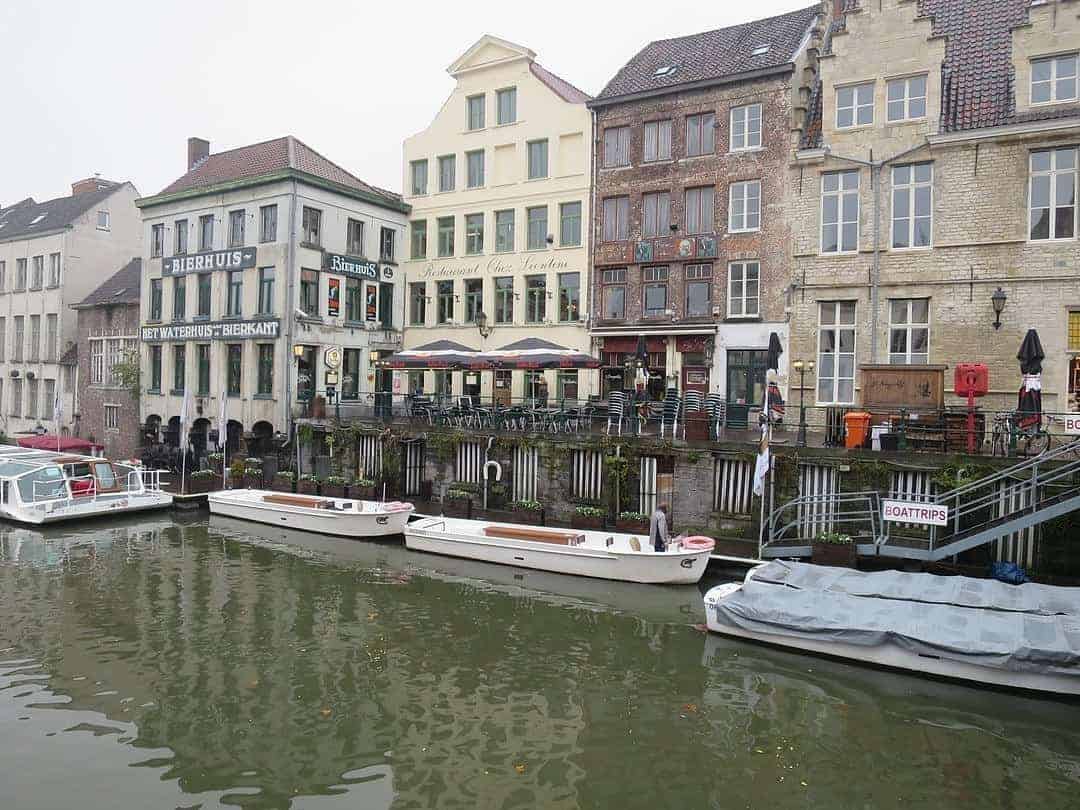 These cities are made for visiting when you are on a road trip, but of course, there are other ways too. As you can see from the map below, they are all relatively close to one another, or close to other major cities such as Brussels.

One thing is clear, however, you get there, be sure to include these top 5 beautiful cities in Belgium into your itinerary.

Looking for a complete resource on Belgium. These are the best sellers for Belgium.

Looking for somewhere to stay?

Check out all the hotels and places to stay in Belgium on Trip Advisor.